That Face When You Help Your Disorganized Friend Move Across The Country: Comment Of The Day

If you’ve been friends with someone for long enough, chances are your buddy has asked you at least once to help them move. You, being the good pal that you are, volunteer to help and even turn it into something fun with your kid. But then, you get there, and despite it being go-time, you figure out that your friend hasn’t packed much. And now, you’re finding yourself winching a dead car onto a U-Haul in a Detroit winter.

Right now, our David is slowly making his way across the country. With the help of Jason and the awesome Otto, he’s planting his stakes in California. But just getting out of Detroit appears to be a monumental effort. Our dear leader is a man who uses a truck bed as a refrigerator, eats spaghetti in the shower, and peppers his yard with tools and car parts. It’s through him that I recently learned that an impact will still work even after you’ve left it just sitting in some wet grass for who knows how long.

In addition to helping David get his shit together, Jason had to stand outside in the cold, using a winch to slowly drag a sleeping Golden Eagle onto a waiting U-Haul trailer. The little winch did the job, but the photo captured above of Jason’s face during the operation is priceless. And for today’s COTD winner (and fellow microcar lover) Jonee, it’s a reminder of what moving a friend is like:

Ah yes. The look on your face as the Golden Eagle is being dragged onto the U-Haul trailer is the look of someone helping someone else move. I’ve worn it, and I’ve seen it too many times. Godspeed.

I’ve more than once been the person with a pickup truck and helped someone move, even if my “pickup” was really a Smart. 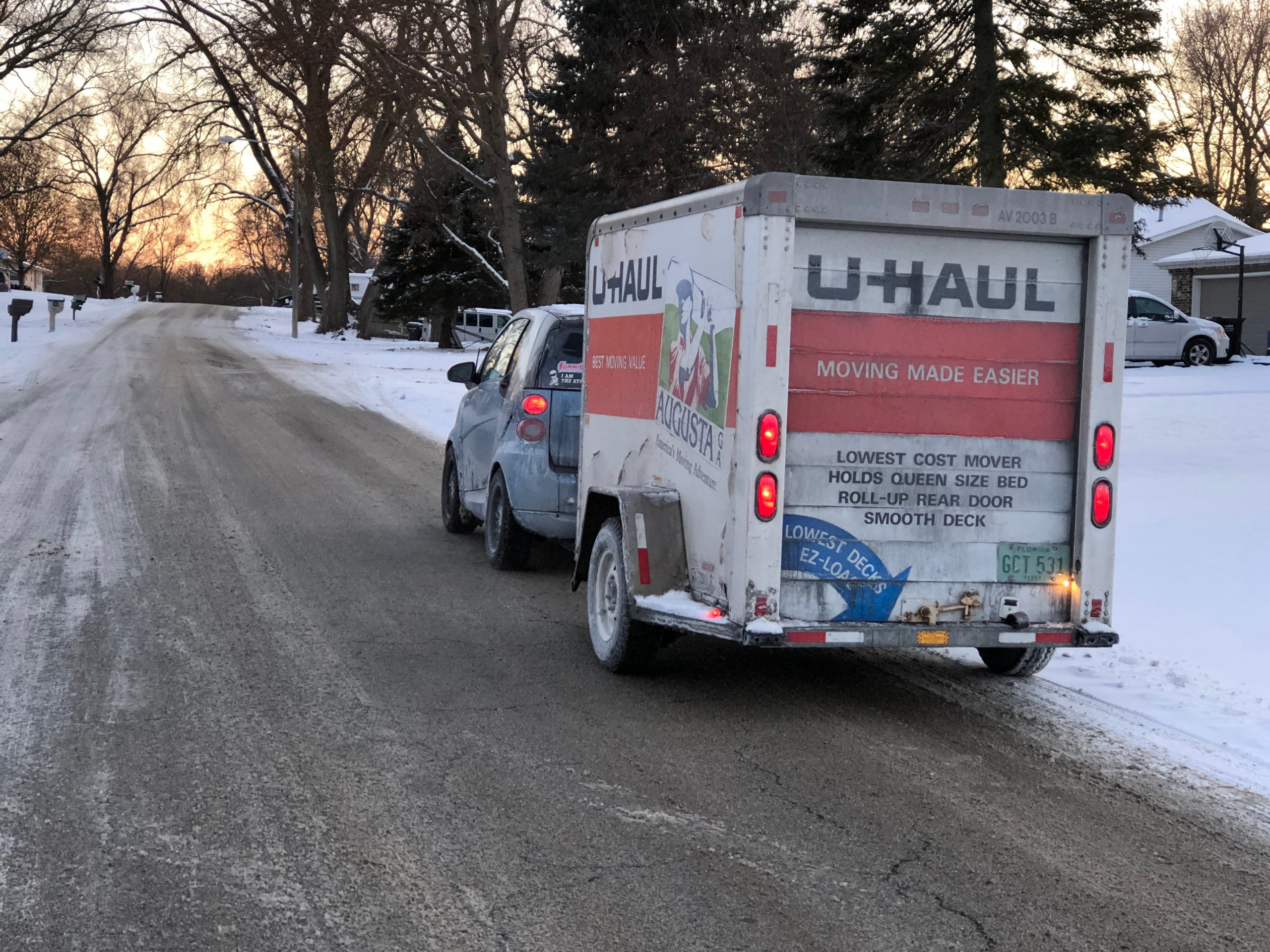 And even then, I’m pretty sure my face didn’t look much different than Jason’s. Actually, since I was towing a loaded trailer on icy roads, it may have looked puckered. Either way, Jason’s face is the face every friend or family has when they discover what they volunteered for.

And yes, U-Haul not only installs hitches onto Smarts but rents trailers to them, too.

Best of luck, guys! Here’s to your trip completing safely and maybe with some fun along the way. And if you want to see Jason, David, and Otto on their trip, tonight they will be in St. Louis at Salt + Smoke on Delmar Blvd at 7 pm. If you’re in Missouri or much of Illinois, you still have plenty of time!

ATTENTION ST. LOUIS: @davidntracy and @JasonTorchinsky will be at Salt + Smoke on Delmar Blvd tonight at 7 p.m.! Come join us if you're around, there will be:

A fun time will be had by all, guaranteed!

Mercedes is a lifelong fan of all things powered by an engine. When she isn't driving one of her five Smart Fortwos or her 14 other vehicles she could be found in the cockpit of a Cessna 172 or perhaps swimming in any body of water that she could find. She also has a deep love for buses of all kinds. Please send her buses. mercedes@theautopian.com Instagram: @mistymotors Twitter: @Miss_Mercedes30 Facebook.com/neonspinnazz
Read All My Posts »
PrevPreviousUsed Tesla Prices Are Falling Like A Stone Right Now
NextWas The Crossover Invented By Henry Dangel? Cold StartNext