Guess what day it is! It’s the first Friday of 2023! And you know what that means, right? It means it’s time for Mercury Monday! Yes, Mercury Monday on a Friday, because I keep forgetting to do these and if I’m honest don’t really care about consistency or anything like that, which is why so many parts of my life are a mess, if I’m honest. Look, the fact that I’m talking about Mercurys at all here on the pages of the Internet’s Biggest Car Website (don’t check that) should be considered a fucking gift to every Mercury-lover in the known universe, so let’s all just calm down. Are we calm? Good. Now, let’s get amped up again, because we’re going to be talking about a truly under-appreciated and nearly-forgotten Mercury: the eighth (and last) generation Cougar.

Yes, that Cougar. I bet the last time you can remember seeing one your life was in a very, very different place, because these are almost extinct and have been for quite some time. They’re pretty much all on Ghost Car status now, which is, I think, a shame, and we’ll get into why. The eighth (that word never looks right to me, by the way. I mean, over 66% of that word is “ghth” which reads like the sound you make when you walk crotch-first into a fire hydrant. Also, right now, try saying the plural of “eighth,” which “eighths.” Go on, say it out loud. Eighths. Eighths. Ew, it feels so weird.) generation was sold for the model years 1999 to 2002, and was a real break from Cougar tradition in so many ways. 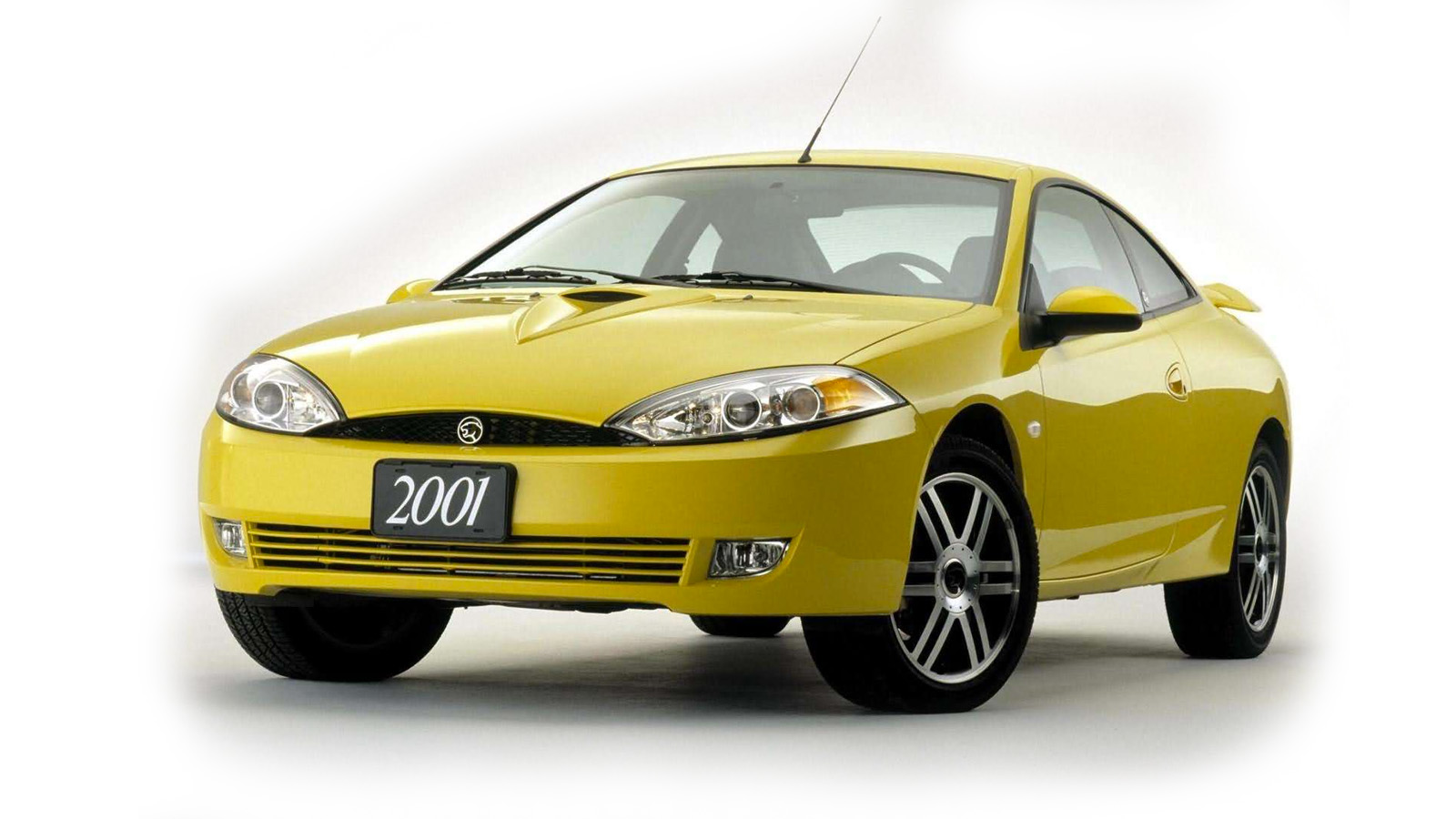 It was the first transverse-engined, FWD Cougar. The first hatchback Cougar. The first Cougar that didn’t necessarily drink gas like a drunk elephant. And, significantly, the first Cougar that wasn’t a Mercurized version of a Ford product. Remember, the first two generations of Cougar were slightly upmarket-ed and chrome-slathered and over-fake-grilled variants of Mustangs, then the next two gens were versions of Torinos, then the next two were Fox-chassis versions of Thunderbirds or Granadas, then the next-gen Thunderbird. 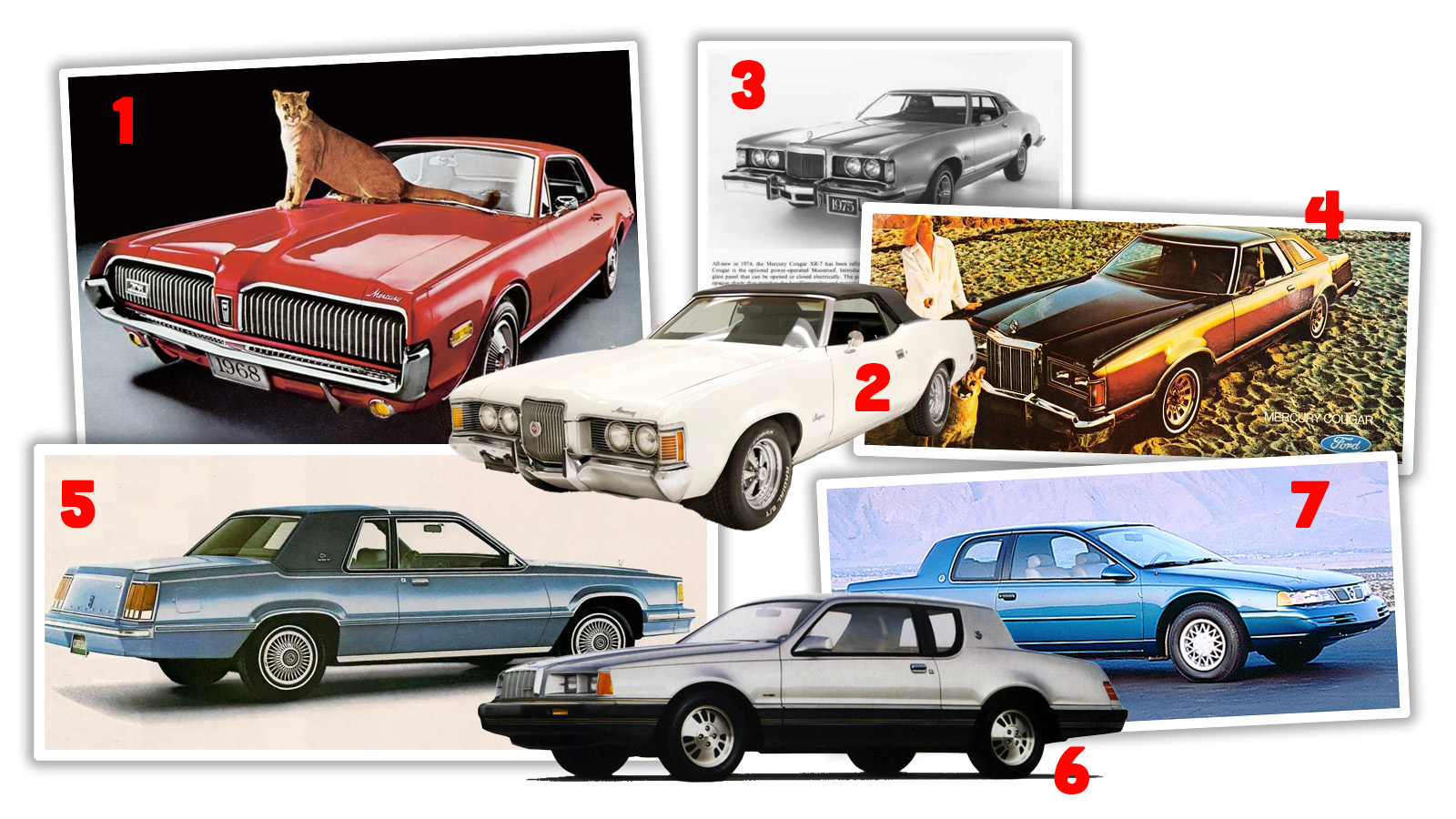 The eighth Cougar was based on the Contour/Mondeo world car platform, but there was no Ford equivalent car that it was re-badged from. There may have been, since it started life as a new version of the Ford Probe, but in the end it stood alone as a unique Mercury, though in global markets that lacked the Mercury brand, it was badged as a Ford Cougar, which may make it the first Mercury to be re-badged as a Ford, in some exciting opposite-day shenanigans. Maybe some commenter will prove me wrong, but at this moment I can’t think of another Mercury that got re-badged to a Ford.

I’ll admit that I hadn’t thought about these cars in a long time, so when I started looking back at them, I was pleasantly surprised; these things aged well, I think. A lot of that has to do with the fact that this Cougar was the first Mercury to make it to market to feature Ford’s New Edge design language, which I think overall has aged quite well. The New Edge look defined the visual vocabulary of the Cougar, which featured crisp, clean, flowing lines, an actual respect for panel cutlines, which were used to define the shapes of the lighting units and air intakes. 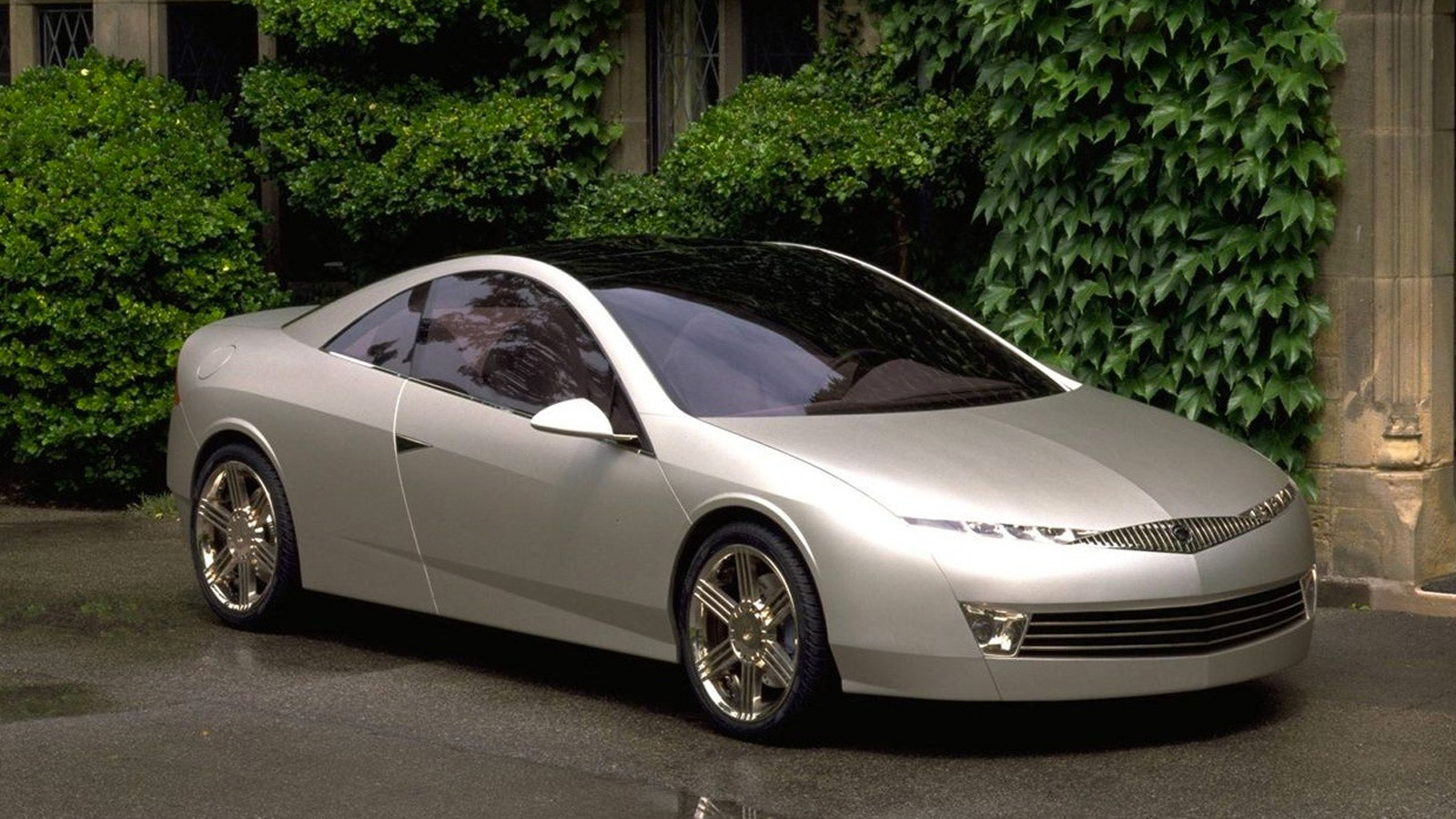 The look was teased with the 1997 Mercury concept car known as the MC2, and it had a more pure New Edge look with more dramatic curves and angles and, interestingly, a more traditional Mercury waterfall grille hiding in that little arched maw, something that wasn’t retained for the production car, which was impressively free of Mercury’s usual fixation on adding a bunch of chrome trim bits and details. 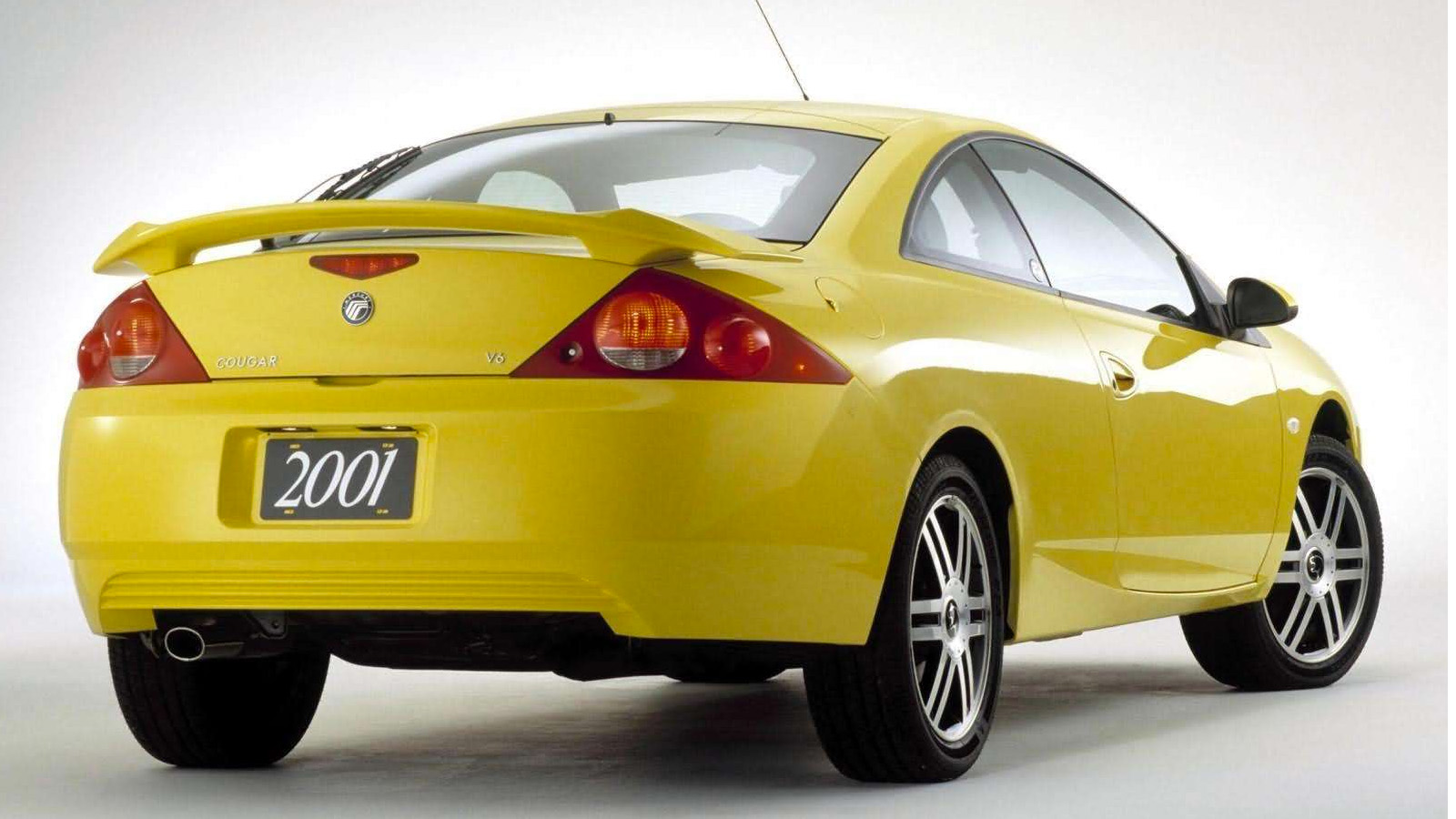 I always liked the taillights on these, too, with their angular shape but also with those two inset hemispheres growing out of them, like geometric and non-unsightly pimples. I don’t think it’s too much of a stretch to put the Cougar – and a lot of the Ford New Edge cars – in the same general category of Good 1990s/Early 2000s car design along with cars like the Audi TT. There’s similar motifs of cleanliness and geometry and precision that are pretty timeless.

Even after over 20 years I think this car looks tidy and modern and sleek. It’s handsome and unfussy, and the heavily raked beltline emphasizes the sports-coupé feel. This whole category of car – the sporty coupé, is pretty rare today. Cars like the Toyota 86 or Supra or BMW 2 series are similar in coupé-ishness and size, but they’re all much more serious about their performance and sporting character. The Cougar was just sporty, in that you’d use it to get to work and get groceries and fill the hatch with bags of peat moss and pick up your buddies to go bowling or whatever, but when you’d turn and look back on it in the parking lot, or gun it a bit when getting onto a highway on-ramp, you’d get a little tingle of I-drive-a-sports-car in your bathing suit areas. Just enough to keep things fun.

It’s a hatchback with more fun proportions and I suppose a more cramped back seat; really, for a lot of drivers, what’s not to like about this?

Commercials played up the sporty nature of the car, and in that one above, you get some nice emphatic gear-shifting, too, because that’s how you know fun is being had. The spy thing was a bit of a series for these Cougar ads, and Ford must have taken it pretty seriously, because, look, they got Udo Kier to star in them as the undeterminedly-foreign bad guy!

Damn, that spy is fantastic at disguises! And fast, too!

Other ads and brochures definitely continued to emphasize the sportiness, and relied heavily on the late ’90s/early 2000s love of the word and concept of “attitude.” Why did we like that so much? I feel like today we’d call the same traits we meant by “attitude” just “being a dick.” Maybe I’m wrong. 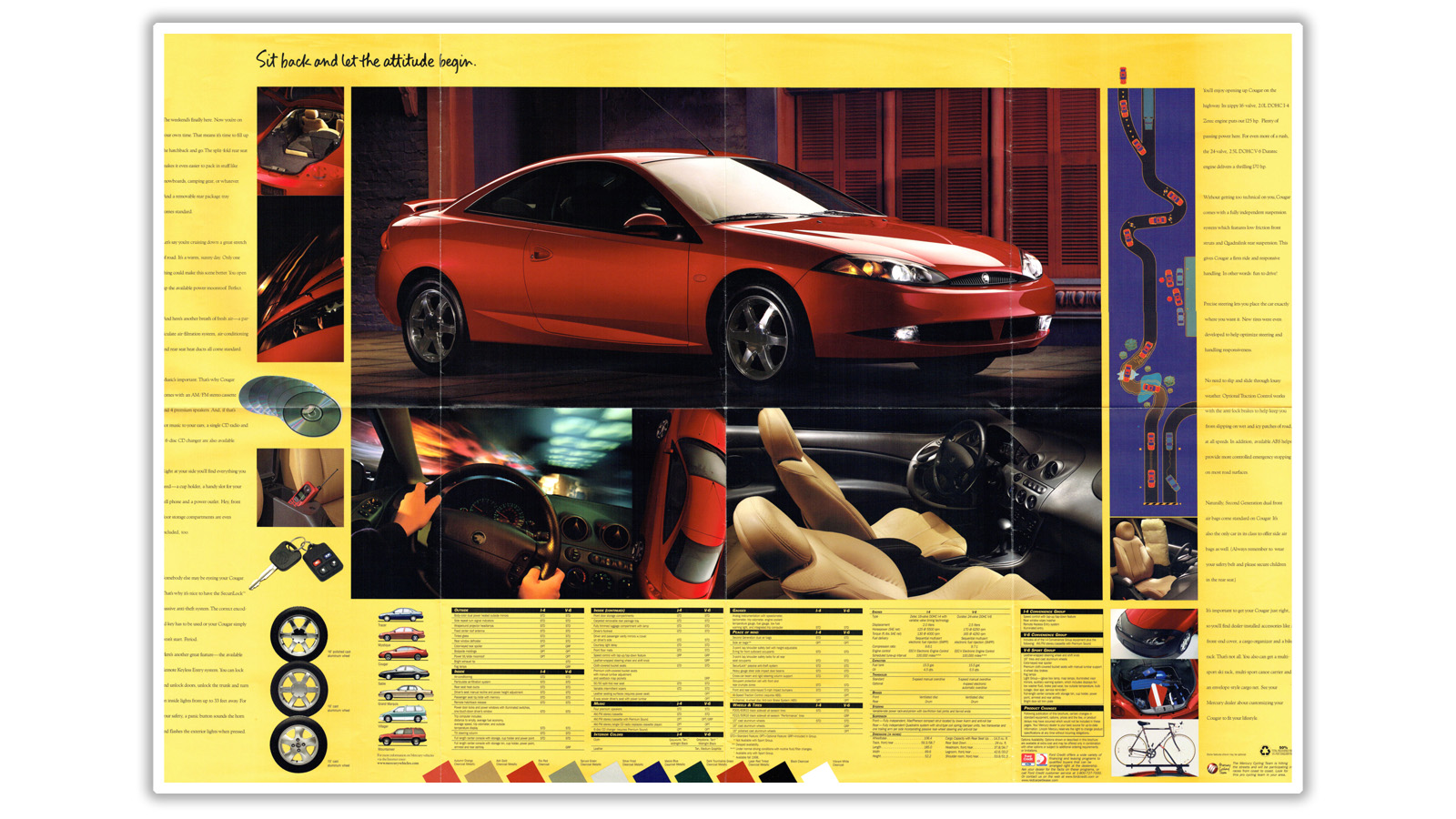 As far as if it was able to cash the checks its sporty looks were writing, I think the answer is that, for the era, pretty much? You could get the Cougar with either a 2-liter four-cylinder Zetec engine that made a respectable but not really notable 125 horsepower, or a Duratec V6 with 500cc more than the four that made a genuinely decent 170 hp. Remember, a significantly more expensive FWD sports coupé of the same era, the Audi TT, was making only 10 hp more. It wasn’t bad!

There were MacPherson struts up front and a quadlink rear suspension, with a rear anti-roll bar, and while I don’t think I’ve ever actually driven one of these, I suspect that they were likely on par with other sports coupés of the time. I mean, MotorWeek seemed to think it was pretty okay:

They especially liked the variable-ratio steering and the exhaust sound, the latter of which kinda surprised me. Also, it seems that cable-actuated shifter is smooth as sex-butter, and you got the Contour SVT’s antilock brake system with the V6 (optional for the four). Hell, they said it had “superb handling!” Their only real complaint was that the back seats might be tough for ample-assed friends. Still, overall, pretty glowing review! A John Davis glowing review!

Today, in the absurd Year of Our Ford 2023, it’s hard to think of a mainstream car more forgotten than the Last Cougar. You pretty much never see them on the roads, and the closest one in anything like my personal orbit is probably the one that was owned by our own Stephen Walter Gossin, but that one caught on fire on the side of the road and is now in Mercury heaven, which is interestingly located in the orbit of Venus, not Mercury. 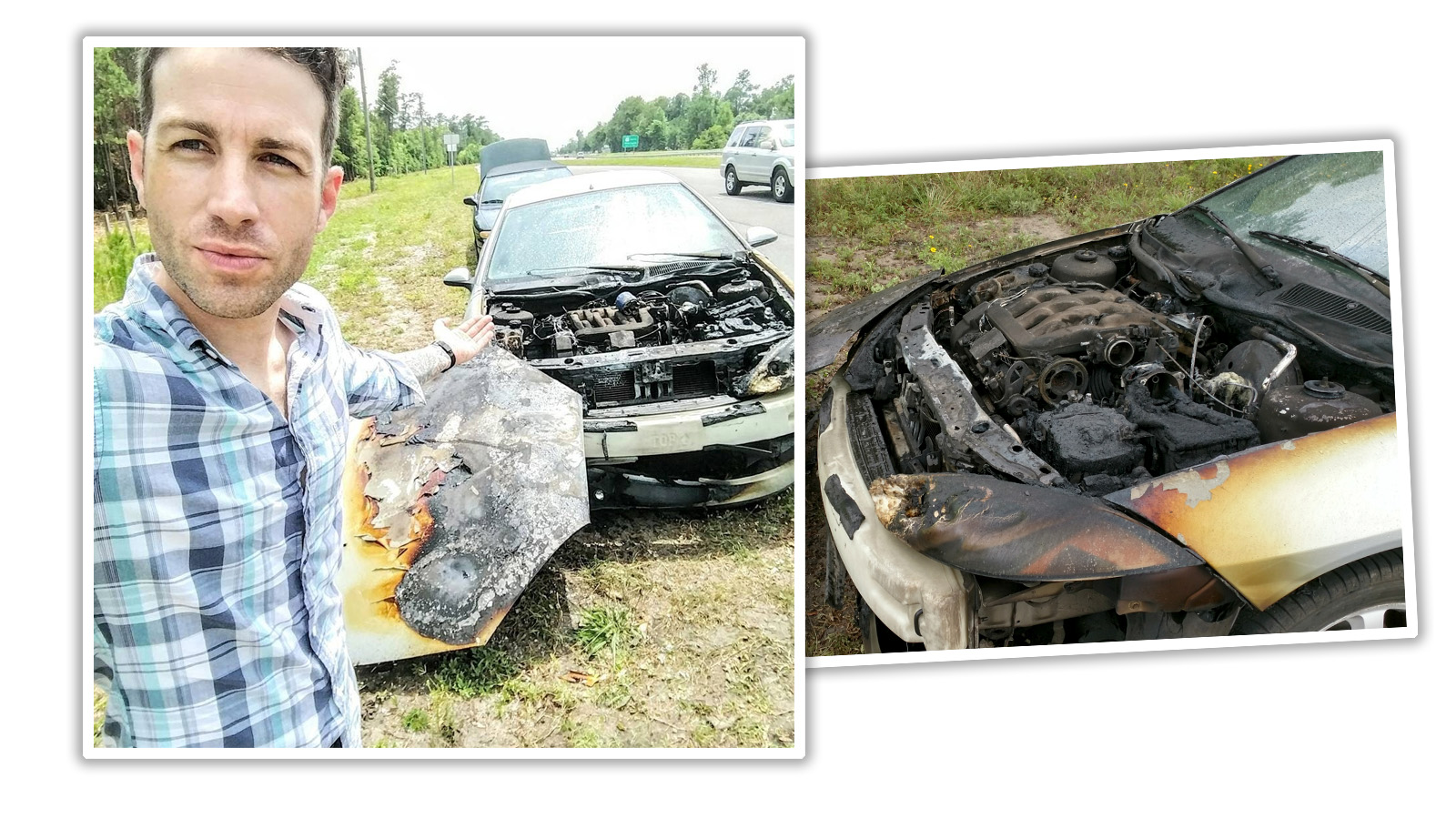 At least you get a nice view of that lovely intake manifold with the charred hood torn off, so that’s a plus. Stephen also gave me a bit of insight as to why these Cougars are all but extinct in their natural habitat of our nation’s roads: they’re a pain to work on. Here’s one example: 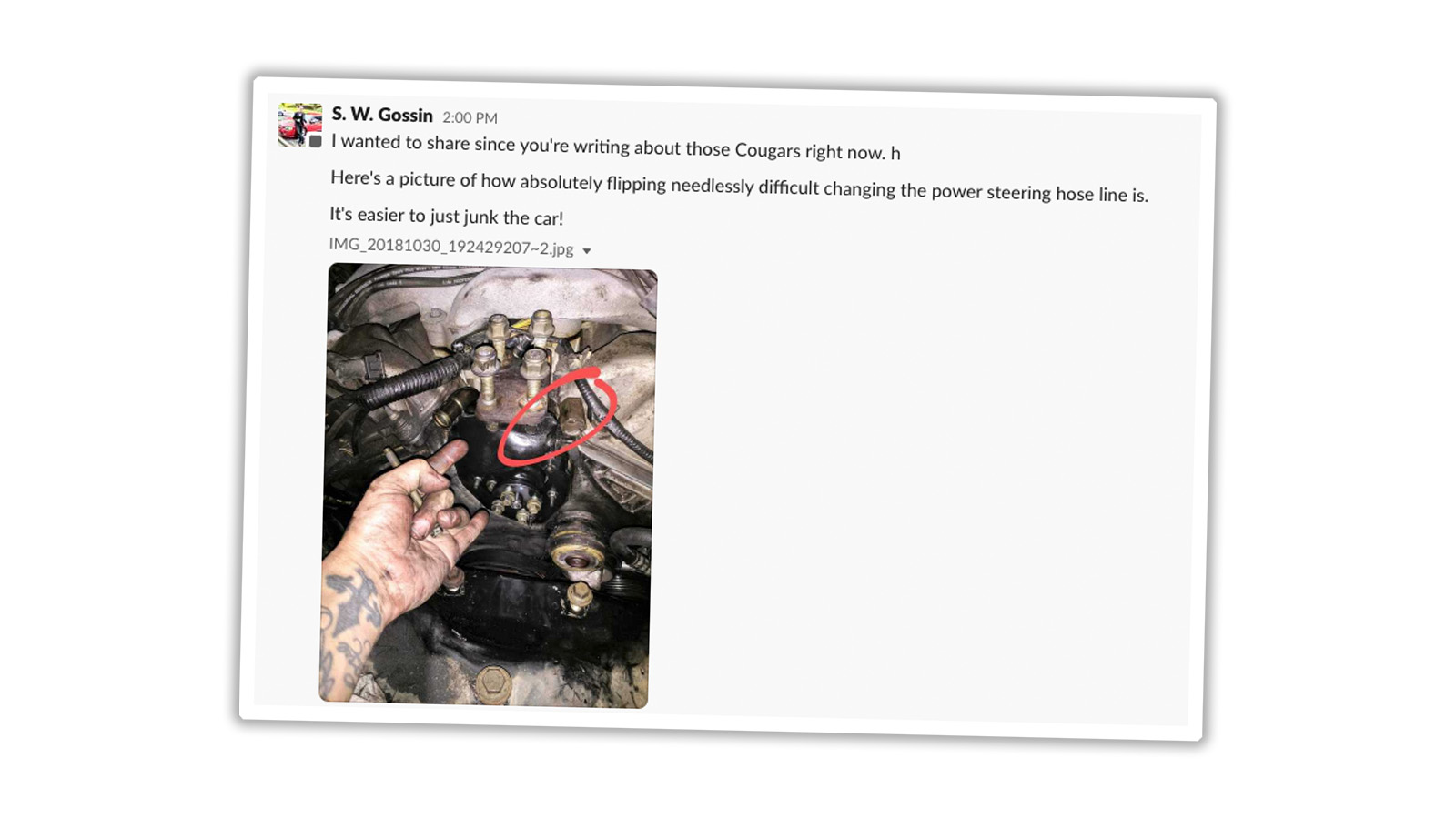 If a guy like Stephen, who’s tolerances for what is or isn’t worth putting time and effort to keep running far eclipses that of most normal, healthy humans,  is saying it’s better to junk the car, then that definitely means something. It could be that this otherwise charming and appealing little sporty fella just had too many ass-pain Achilles’ heels like this power steering hose, and they ended up all junked when something like this – that could have been a reasonable repair on another car – failed.

Mercury is itself something of a ghost marque, and I think this Cougar is among the ghostiest of Mercuries. You’re more likely to see an old ’60s Cougar or even a Fox-body Capri than an eighth-gen Cougar in the wild. It’s also a shame the Cougar name died with this car, too, because I do love evocative animal names for cars. Of course, the modern slang of a sexually aggressive older woman who seeks out younger partners may have rendered the name an unlikely future choice, but who knows?

Anyway, if you see one of these, I suggest taking a moment to stop and appreciate this handsome and now uncommon lithe cat. And happy Monday on Friday.

Mercury Monday: The Mercury Cougars Of The 1980s Are The Fox Bodies Everyone Forgot About

Mercury Monday: The Un-American Mercury Tracer, The Econobox With A Miata Engine

I'm a co-founder of the Autopian, the site you're on RIGHT NOW! I'm here to talk to you about taillights until you cry and beg me to stop, which I absolutely will not. Sorry. Hug? Also, David's friend.
Read All My Posts »
PrevPreviousOur Daydreaming Designer Imagines He’s David Tracy Buying A ‘Holy Grail’ 1987 Jeep Truck That Never Existed
NextTales From The Slack: How We Pick Headlines For StoriesNext