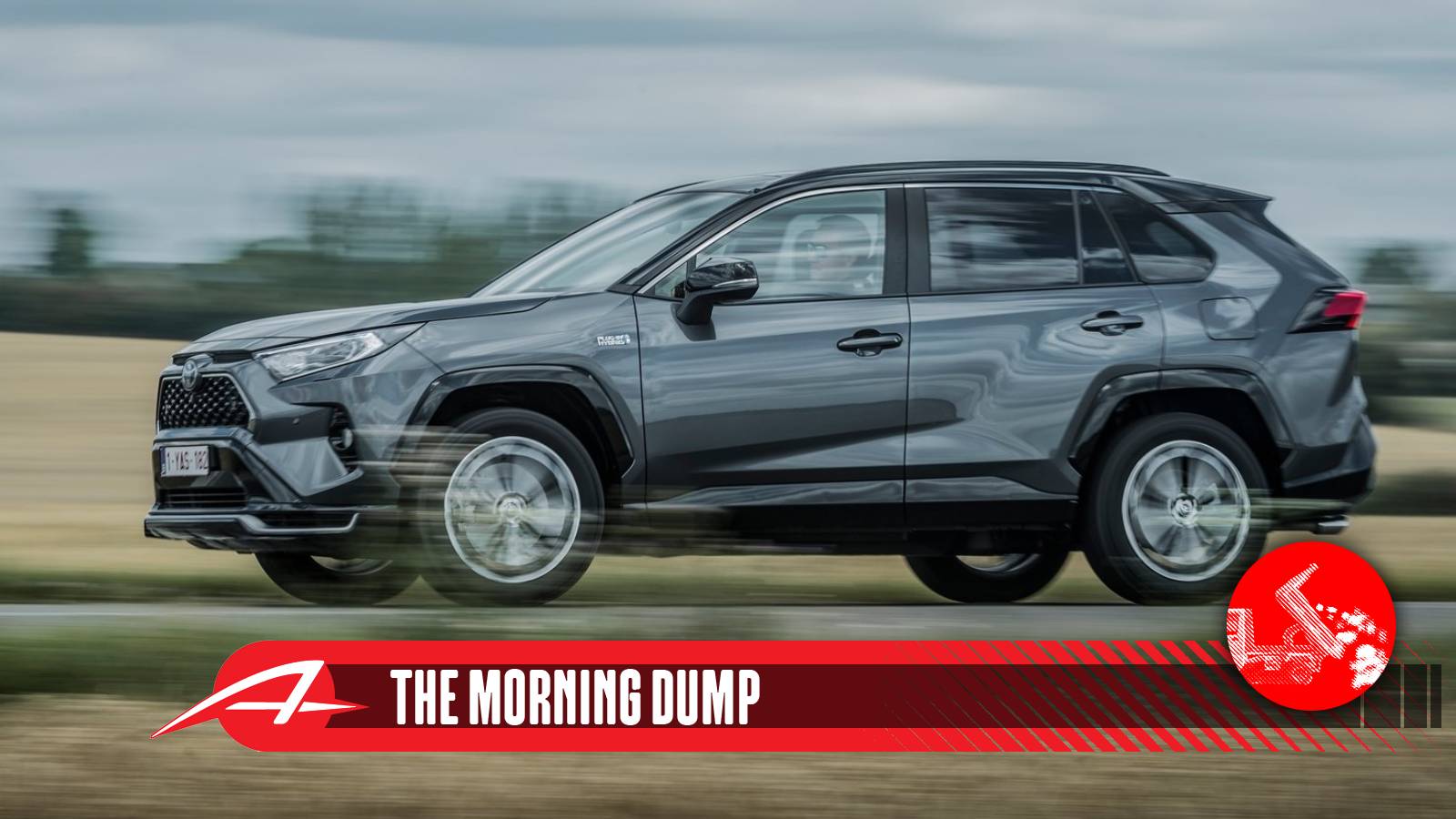 Happy Friday, and welcome back to The Morning News Roundup Whose Official Name Remains Under Discussion, Mostly Because We’re All Busy With Other Stuff And Will Figure It Out Eventually. (See, now that one’s too long.)

To close out this glorious week, we have news about Toyota’s manufacturing headaches possibly being over; some stuff about Elon Musk maybe drawing the ire of the Securities and Exchange Commission, again; an investigation into predatory title loans; and guess who’s buying up all the EV charging stations?

It takes a lot to disrupt Toyota’s mighty carmaking machine. But even (arguably) the greatest manufacturing operation on the planet couldn’t withstand the COVID-19 pandemic and its unprecedented after-effects, like supply chain woes, semiconductor shortages and labor issues. Like nearly every other automaker, Toyota struggled with full-blast production in 2021 and 2022 to the tune of millions of cars.

But now, Toyota’s back, baby. “Back with a vengeance!”, declares Automotive News. Holy shit. Everything—yes, even the Prius—has a 2JZ now. Two dozen FJ Cruiser variants will be on the road by 2025. Akio Toyoda is going to light a gigantic, 200-foot-wide Toyota logo ablaze on a building facing the Volkswagen Group’s headquarters.

Okay, it’s not quite that awesome. But the Japanese automaker did advise its suppliers that it should be able to get worldwide car production past 10.6 million vehicles this year. That’s a big jump from the old pre-pandemic record of 9.05 million cars in 2019:

“The worst time is behind us,” declared Kazunari Kumakura, chief officer of the purchasing group.

The company churned out 8.58 million vehicles globally in 2021.

Results for all of 2022 will be released Jan. 30. But through November, worldwide output for the Toyota and Lexus brands was up 7 percent, to 8.33 million vehicles.

Cranking up output past 10 million vehicles would mark a significant achievement for Toyota as it races to recoup lost production and restock diminished inventories. It had hoped to make up ground in 2022, but repeatedly faced setbacks due to the semiconductor crunch, pandemic lockdowns and even natural disasters.

It’s been a terrible couple of years! But now Toyota’s back, and right in time for (checks notes) rising interest rates, an uncertain economy, and sky-high new-car prices.

Realistically, nobody knows what’s going to happen with the new car market—or the wider economy—in 2023, but pretty much everyone agrees things are “weird” and “less than good, probably.”

Elon Does Thing That May Make Feds Mad, Again

Being the richest man in the world means never having to say you’re sorry. And nobody has a way of skating consequences like Musk, the CEO of Tesla, until maybe last year at least when he became the first human ever to personally lose $200 billion. That probably doesn’t feel great. I get pissed when I misplace a $20 bill.

On Jan. 2, Tesla announced fourth-quarter vehicle deliveries that were significantly below the company’s most recent forecast to investors. The news sent Tesla’s stock price plunging when markets opened the next day.

The timing of the stock sales raises a crucial question: Did Mr. Musk know that business had slowed when he sold his shares? Tesla hadn’t updated investors on its outlook in nearly two months.

“This should be of great interest to the SEC,” says James Cox, a securities-law professor at Duke University who has testified before Congress about insider trading. “The issue here is, what did he know and what was the market anticipating when he sold? That’s a critical moment.”

Exceptions do abound, such as when officers buy or sell under a preset trading schedule, which Musk has done before. The story’s worth a read in full if you’re into that sort of thing, but based on historical precedent, I think the outcome here will be somewhere between “nothing” and “Musk gets a minor slap on the wrist from the SEC and pays a fine, or chooses not to pay it.”

I doubt he’s losing sleep over this. Or he’ll just tweet through it.

I can’t say I’ve encountered chargers from California-based Volta in my travels, but apparently they offer free charging at malls and shopping centers backed up by big media display screens for advertising. Advertisers pay for the billboard, you get electrons for your car in exchange.

Volta went public via a SPAC in 2021, back when that sort of thing was fashionable. But now it has a new owner: Shell, which picked it up for just $169 million—an amount I assume equals a rounding error for the oil giant. This comes after Shell posted record profits when gas prices shot up last year. Love that for them!

Anyway, here’s a relevant article that ChargedEVs (where I first spotted this news) published in December that explains why oil companies are getting big into EV charging. The answers are fairly obvious: like hell are they gonna give up their energy monopolies even if society transitions off gasoline for passenger cars.

Why is Big Oil going big on charging? The optimist sees the obvious motivation—these companies want to do the right thing for the planet and for themselves, transitioning to a new and cleaner technology. The skeptic suspects that their real aim is to cripple that new technology, if not by shutting down innovators in the field, then by controlling the market, and making sure that public EV charging is at least as expensive as pumping gas, and less convenient. “Public chargers, some of which are operated by oil companies, always seem to be out of order. Coincidence?”

Arcady Sosinov, the founder and CEO of FreeWire Technologies, is in as good a position as anyone to understand the relationship between oil and charging—his company is working with several major oil retailers, including Chevron, Phillips 66 and service station chain Parkland, to help them deploy fast charging at their gas stations.

“Chevron and Exxon alone printed $200 billion in EBITDA [earnings] in the last three quarters,” says Sosinov. “These are record margins, record profits, but guess what? They’re not spending money building new oil rigs or drilling new wells. And that’s a self-fulfilling prophecy—if they’re not drilling new wells, it’s going to keep the price of oil high for an extended period of time…so they’re going to see these profit margins for years to come. Where are they going to spend all that cash?”

You know, I’m gonna print this article out and mail it to the next person who says I’m “on the take for Big Oil” just because I said Elon seems like a bad boss.

Finally, I’ll close us out by recommending this story from ProPublica, the investigative public-interest nonprofit. It dives into title loans—which, if you don’t know, is a loan offered at extremely high interest rates using people’s cars as collateral—and how lending giant TitleMax trains its employees to help hide the true costs of these loans.

TitleMax’s top executives have been clear publicly that the company’s business model depends on repeated monthly interest payments by its 293,000 customers nationwide. Brown, who worked as a store manager at TitleMax for almost seven years, and former Savannah store manager Ted Welsh Lupica both said that the company’s business model was drilled into them in training, and that they faced repercussions for telling customers how to pay off their debt quickly or in full.

Welsh Lupica, a military veteran, said his supervisors told him to stop being transparent with customers about the true costs of borrowing.

Still, Welsh Lupica kept providing this information to his customers. “I would be explicit. I would tell them, ‘Look, you make $2,000 a month and you want a $2,000 loan.’ I’d tell them, ‘Even if you pay us $200 a month, you are going to be doing that for the rest of your life because that’s not going to pay down the loan’” with the triple-digit interest rate, said Welsh Lupica, who worked with Brown for a few months at a store on Savannah’s east side.

The story says employees were often reprimanded or even fired for explaining how this actually works to customers. (I’ll say it again: the fact that so many Americans don’t know how interest rates work is a feature of our system, not a bug.)

Clearly, this is the kind of lender to stay away from. But TitleMax preys on people who often face emergencies and have no other options, with stores frequently found in lower-income areas in towns and cities. I don’t judge anyone who uses these services; I’ll save my ire for TitleMax itself and its business model.

Do you think 2023 be a good year for new car sales now that production is normalizing? Or are high prices and interest rates going to deter a proper auto industry comeback?