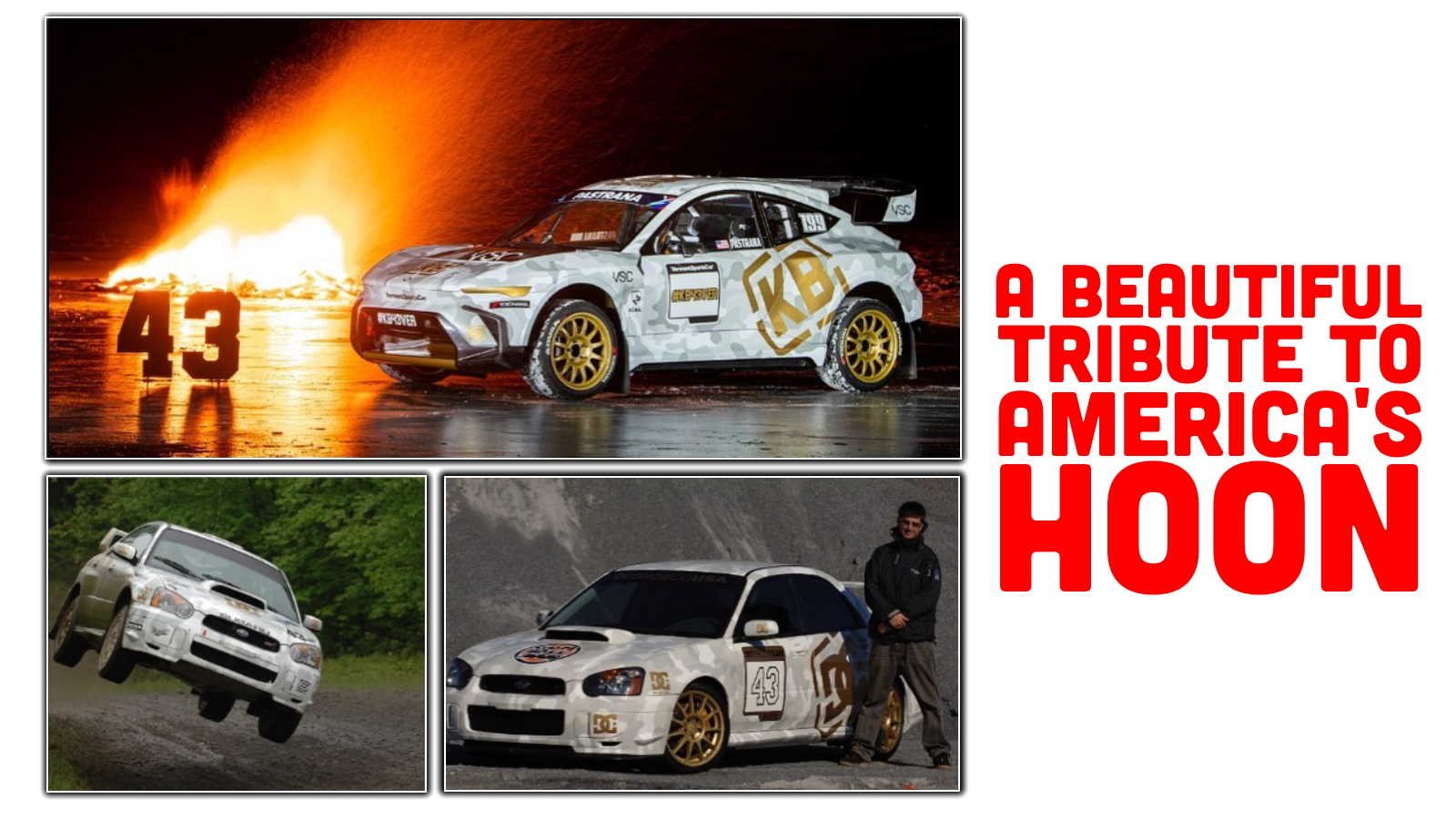 Even referring to Ken Block in the past tense hurts. His impact across every aspect of car culture was profound. From professional drivers and amateur builders alike, tributes to the late rallyist and shoe mogul are pouring in, and all-American action hero Travis Pastrana is paying tribute to Block with a throwback livery recalling the Head Hoonigan’s 2005 rally season.

Before Monster Energy sponsorship, liveries by famous artists, and even Subaru Rally Team USA, there was the white and gold Vermont SportsCar DC Shoes WRX STI. Not only does the Peter Stevens-designed blobeye facelift still look sharp today, but Block’s 2005 livery was also absolutely off the chain.

Snow camo was something completely different in 2005. Nobody had it on their Carolina-squatted brodozer, plus Block’s pattern was particularly subtle. Then there’s the gold: Fast Subarus and gold wheels go together like nachos and tequila, and bringing those gold wheels into the livery was a great way to honor Subaru’s heritage while doing something very different from the iconic 555 WRC livery.

Pastrana and Block go way back, having raced together as teammates in Block’s debut 2005 season. Both drivers then went on to be part of Subaru Rally Team USA, with Pastrana winning four back-to-back Rally America Championship titles in 2006, 2007, 2008, and 2009.

The bond between the two drivers stayed close as the years go on, with Pastrana starring in several spin-offs of Block’s iconic Gymkhana series, the latest of which dropped in December and is absolutely worth a watch. It features a wicked Subaru wagon catching some seriously impressive air.

Mind you, Pastrana’s tribute livery won’t be going on a Subaru but instead on a purpose-built electric rallycross car called the FC1-X. With 787 kW of power and 811 lb.-ft. of torque from a four-motor all-wheel-drive system, the FC1-X is a proper weapon. Figure a zero-to-60 mph time of 1.4 seconds and enough cooling and battery to run at race pace for 13 minutes. The future of rallycross is well and truly here, and it looks absolutely rad.

As a further way of paying tribute, some changes to Ken Block’s original livery have been made. Instead of the DC Shoes logo, Block’s initials are plastered on the quarter panels of Pastrana’s FC1-X, while the numbering panels and front fascia are emblazoned with #KB43VER, the hashtag paying tribute to the iconic driver.

Expect to see the tribute car in action at Nitro Rallycross’ seventh-round event in Trois-Rivières, Québec on Jan. 20 and 21.