If you’re a fan of dirty combustion noises and heart-racing shenanigans, you may have felt a bit underwhelmed by Electrikhana, Ken Block’s EV Gymkhana film released a few months ago. Fear not, real-life action figure Travis Pastrana is here to liven things up again. This time, Gymkhana goes full Florida Man, set to cult classic Cars With The Boom.

Let’s start with the machine of the hour, Pastrana’s wild Subaru GL Wagon with active aerodynamics and an absurd amount of power. The thing cranks out more than 860 ponies, a wild figure for a boxer engine, and an equally wild figure for anything that looks like a tumble dryer from the Reagan years. 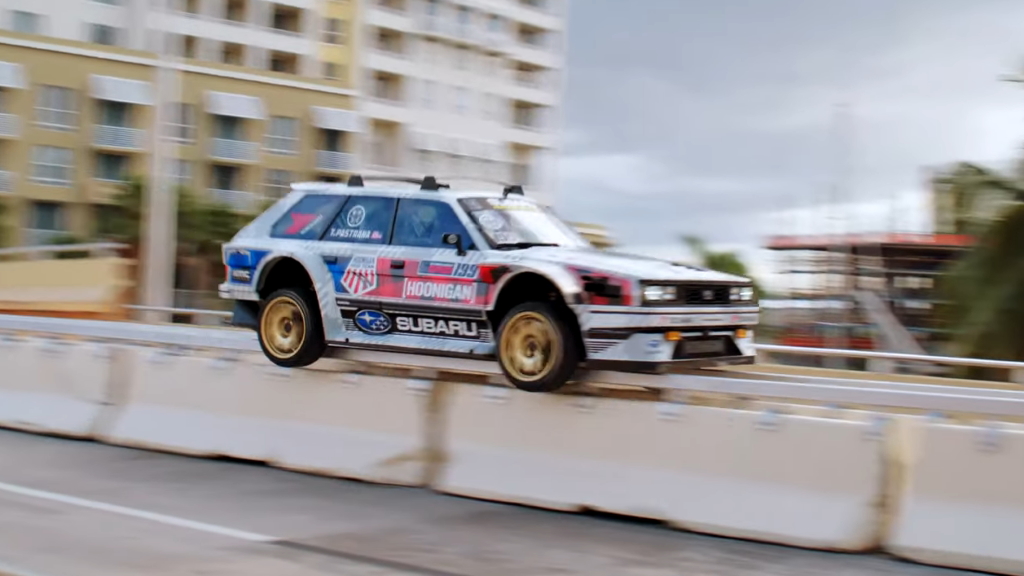 The visual gags start early, with Pastrana pulling off a 50:50 grind roughly a minute and twelve seconds into the video. While rail grinds like this are normally done unintentionally by clueless drivers, a successful, intentional attempt reaches deep down into our Tony Hawk’s American Wasteland nostalgia and sprinkles a little sauce on it. Far out, man. 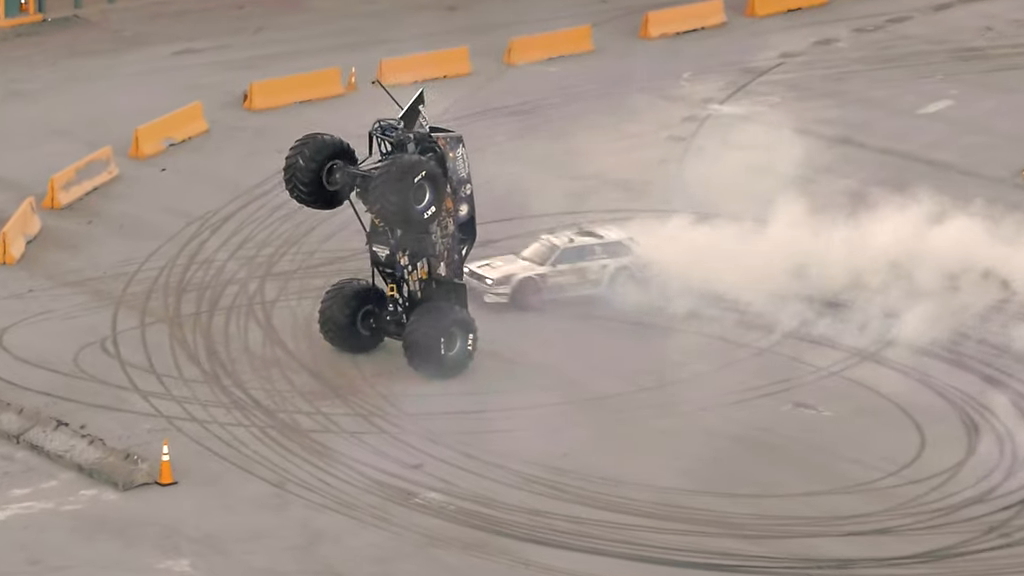 The next big stunt looks like it’ll be a simple set of donuts until you see a monster truck perched precariously atop a Jersey barrier. Ryan Anderson, the driver of monster truck Son-uva-Digger (that’s certainly a name), then uses the barrier as a kicker to huck the truck’s rear tires in the air and start balancing on the front wheels alone. It’s an insane bit of car control that’s far more interesting than the donuts themselves, yet because of how wild this Gymkhana film is, it doesn’t completely steal the show. 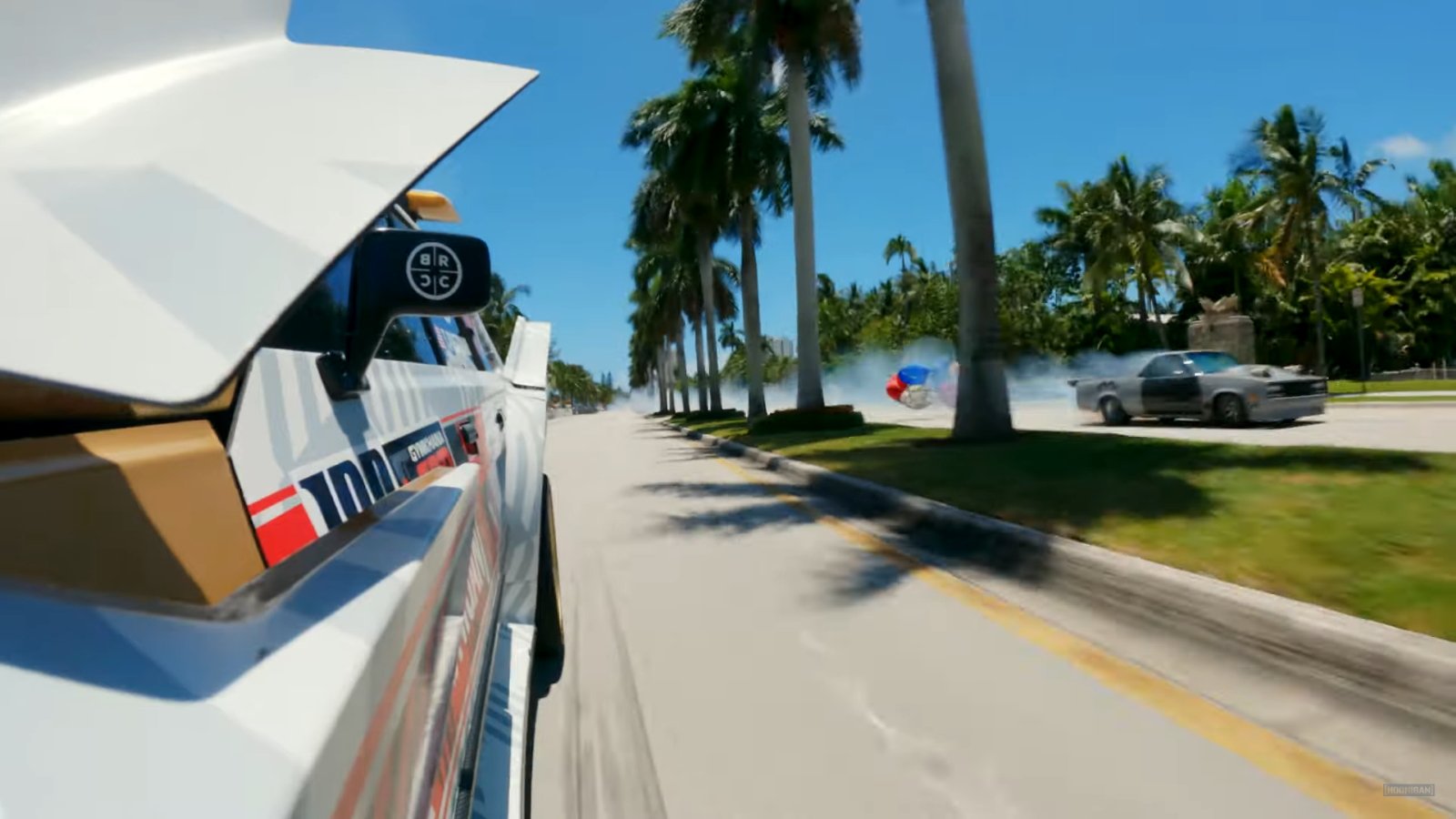 After a quick jump over a set of railway tracks, YouTube’s own Cleetus McFarland makes an appearance in his brawny El Camino drag car, smoking up gumballs before throwing the laundry on the street. Deploying a parachute when not on a drag strip is so wonderfully absurd, plus the cameo is a great example of fan service. 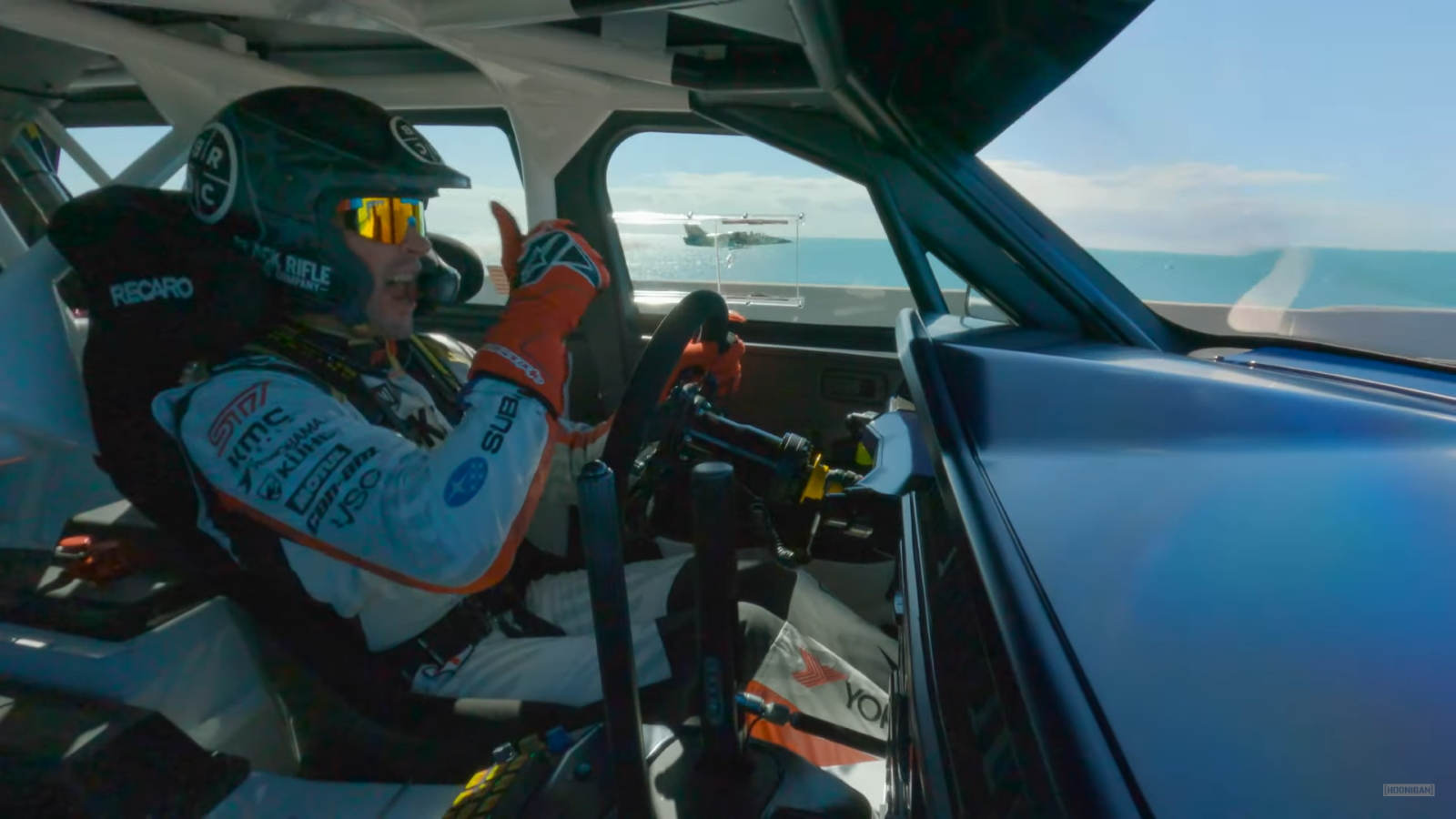 Once the ‘chute is pulled, Pastrana pulls off some more sweet tight proximity skids before racing a goddamn jet down a causeway. That would be awesome enough, but then it leads into a triple-digit huck over a short bridge, culminating in a massive nose-down landing. The sheer amount of speed and height here qualifies for weapons-grade sketchiness and looks like it could’ve gone bad in so many ways. Can someone say spinal compression? 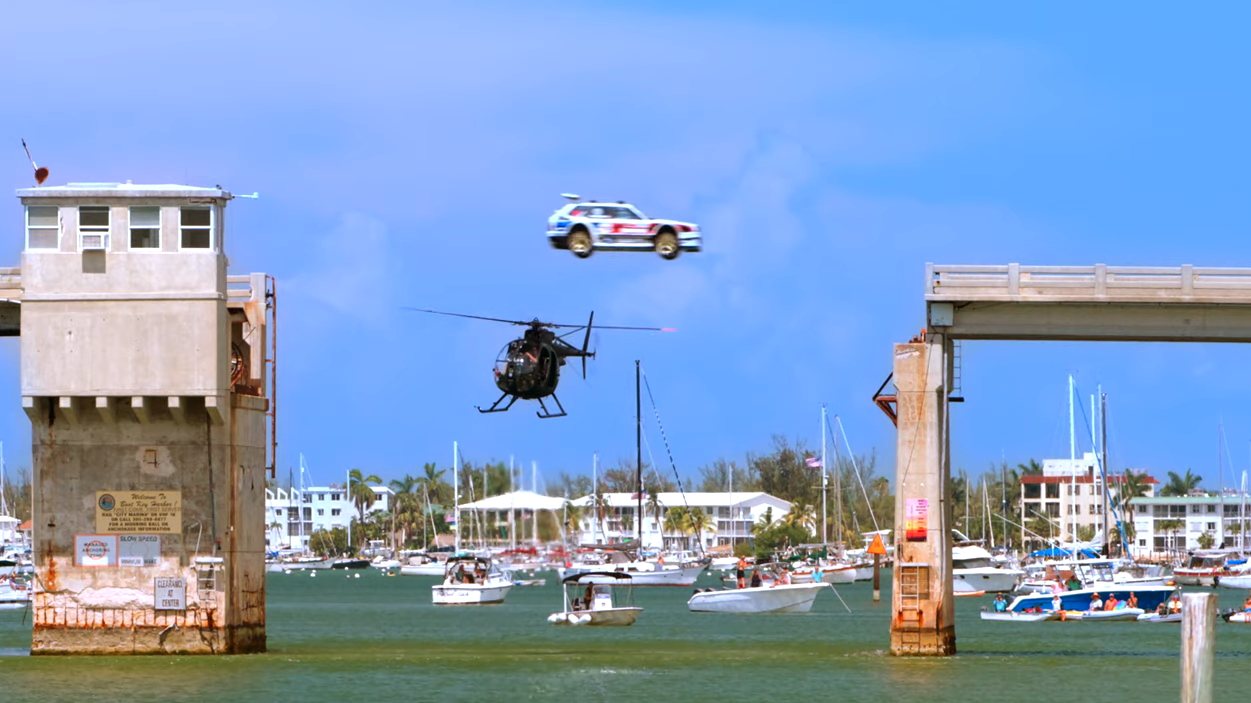 In case that jump isn’t enough, Pastrana follows that up with more hangtime over a bridge that just doesn’t exist. Think Speed without the bomb. Oh, and he came in too slow, he’d crash-land into the helicopter hovering in the deck gap, leading to a thoroughly-minced Subaru. 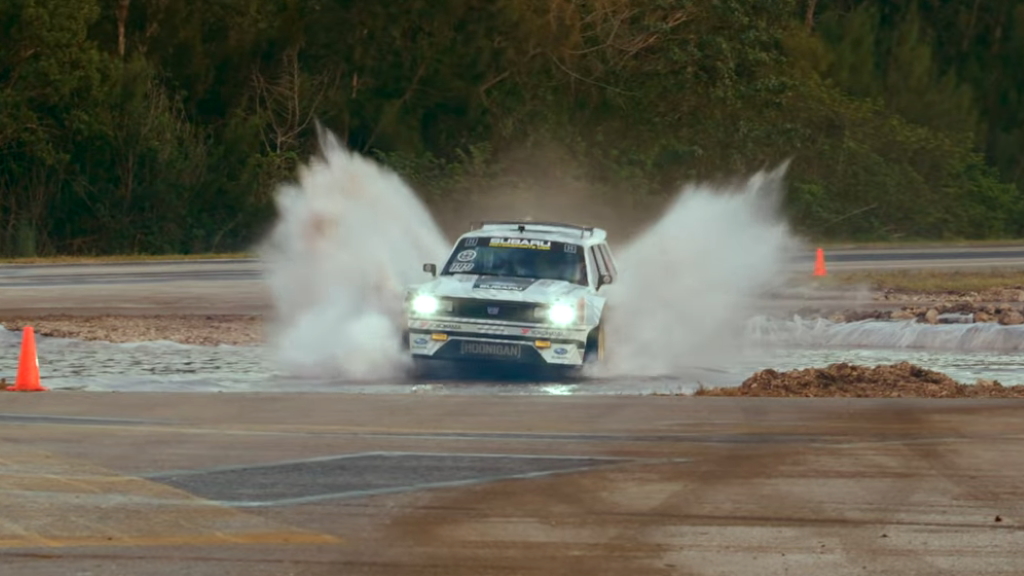 In another bout of nostalgia, Pastrana skips his Subaru across a manmade pond, a bit like in that iconic Countach scene from Speed Zone. In case you thought that the water was shallow, Hoonigan claims it was eight to 10 feet deep, so this appears to be a genuine car skip. It’s classic Pastrana, considering he’s known for skipping dirt bikes across pools, and a stunt so outrageous it feels strong against the insane bridge sequence. 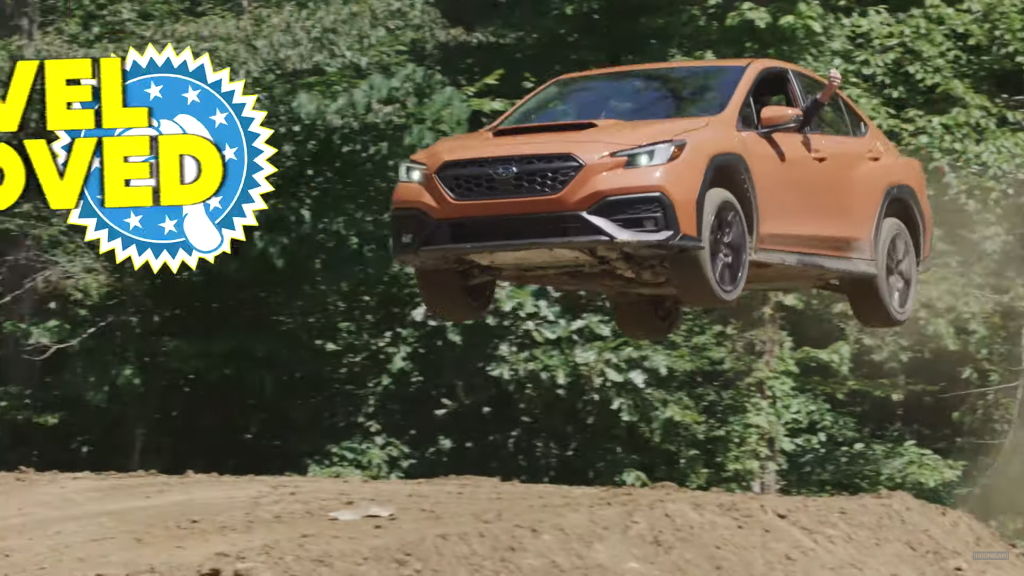 Of course, this thing’s one huge Subaru ad, so it finishes up with some mad decent hoonage of the new WRX including a proper rallycross jump. I doubt the stock suspension liked that terribly much, but it’s still awesome to see. There’s just such a sense of fun to this Gymkhana project that felt a bit absent from Electrikhana.

While there’s still plenty of the tight-proximity action Gymkhana built a name on, these films have a time-honored tradition of visual gags that felt so sorely missed in Electrikhana. From the mannequin in Gymkhana 2 to this latest round of stunts, all the big and little moments of silliness show that cars should be fun more than anything else. If you’re not having a laugh, then what’s the point? While Electrikhana was a solid showcase of high-performance EV capabilities, I’d love to see the Gymkhana team ham it up like they’ve done with this latest edition.

All screenshots courtesy of Hoonigan

Thomas is a Nu Rave-blaring, heel-toe downshifting, maple syrup-swilling, chassis-geeking, junkyard parts-hauling, floppy-haired scenester who's been writing about cars since college. His current ride is a 2006 BMW 325i with the six-speed manual gearbox. Instagram: @thomas.hundal Twitter: @thomashundal
Read All My Posts »
PrevPreviousHertz To Pay Millions After Allegedly Having People Arrested For Legally Renting Cars
NextHere’s What A ’50s Nash Metropolitan Would’ve Looked Like In 1985Next