This time of year, television networks will play Rudolph The Red Nosed Reindeer, the herky-jerky stop motion animated movie from 1964. In this adaptation of the old story, Rudolph features a nose that illuminates with an incandescent bulb and makes a horrible sound like microphone infinite loop feedback. At one point, the title character famously ends up on something called The Island of Misfit Toys, where unsellable items like a polka-dotted elephant and a train with a square wheeled caboose find camaraderie. 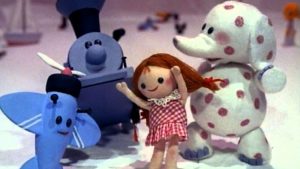 In many ways, American Motors was similar to this mystical island. While perhaps better known by later products such as the Gremlin and Pacer, the company was created by mergers of firms that made rather odd, out-of-the-box products such as Hudson, Willys, Kaiser-Jeep, and Nash. All of these were small companies that dared to explore markets that the Big Three had little interest in at the time (and in many cases would prove to be decades ahead of their time), and American Motors kept up this trend until their 1987 demise. In this installment of AMC What If?, we’ll look at a segment that they had delved into once but never revisited.

One of the products made by AMC’s Nash brand was an adorable British built little compact car called the Metropolitan. Introduced in 1953, this compact two seater convertible (or hardtop) was introduced at a time when bigger was better in American cars, but there was still a small segment of the population that didn’t agree with that thinking. The Metropolitan was never a mega-seller but found enthusiastic buyers nonetheless when new and even today. In fact, if you visited the LA Auto Show you saw a relatively new fan of the marque had proudly dumped his forlorn example on the convention hall floor for all to see. 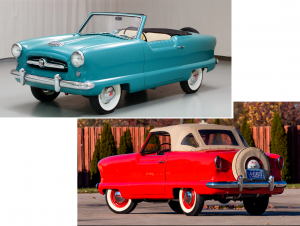 American Motors didn’t replace the Metropolitan when it disappeared after 1962, and with quarter-a-gallon gas few explored this idea of an entertaining economy ultra-compact in the years that followed. The fuel crises of the seventies forced manufacturers to consider this formula again, yet some of the ‘commuter’ cars that ostensibly resulted in the early eighties (like the Pontiac Fiero and Honda CRX) were really just a ruse to make sports cars, and none were ragtops.

What about an alternate reality where American Motors brought the Metropolitan back to life around late 1984? As Volkswagen proved later with the New Beetle, tapping into the nostalgia can be a ticket to success. Still, in all honesty the revived VW didn’t really offer anything substantive that the concurrent Golf did not. With the reborn Metropolitan, AMC would do more than just lure in buyers with cuteness; they’d attempt to recreate the fun commuter car that the original was, and the market might have been interested in again.

The mechanicals for the new Metro? In the early eighties, AMC was partnered with Renault (who was not really a misfit, just French) and selling the R5, one of their amusing subcompact hatchbacks which they had whimsically called the Le Car (left below).

However, when Renault released the redesigned ‘Supercinq’ in 1984 (right above), AMC ceased importing the model to the United States, instead giving us the far less interesting Renault 11-based Encore hatchback. As luck would have it, the ‘Supercinq’ measures within inches of the OG Metropolitan, and like the original Metro the Renault offers the perfect blend of economy, supple ride, decent (for the time) performance and reasonable handling (and a turbocharged model). Other than a slight wheelbase change, these mechanicals could be perfect as-is in the new Metro. It would NOT be a sports car, but if you’ve ever seen footage of Renault Cup racing with R5s battling it out on three wheels it should be obvious that any perceived lack of fun with this chassis is your own problem, not the car’s.

The overall design and style of the new Metropolitan would be retro from an eighties standpoint instead of the nineties/early 2000s perspective of the reimagined T-Bird, Beetle, and Mustang. As such, you get a more angular interpretation of the Metropolitan. A good real-life example of a malaise nostalgia nod might be how Toyota did subtle visual shout-outs to the legendary 2000GT on the becoming-legendary folded-paper 1982-86 Supra (God, I forgot how much I love the looks of BOTH of these): 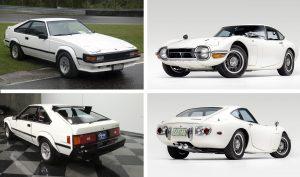 The 1985 Metropolitan would still get the signature cuts in the door tops, the triangular shape of the rear window on the convertible and the add-on hardtop, inset grille, and skirted wheel openings. Admittedly, the tops of the wheel openings at the front might need to have cut lines to allow them to pivot out for low speed tight turns, but cutting a bigger opening kills the Metro look completely (I tried it). The 1984 Lincoln Mark VII was the first US car to get composite lights, so the Metro could legally have them as well. 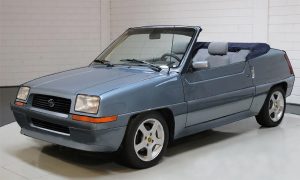 The alloy wheels and tires shown would be available on the Turbo version. Steelies would be on the normally aspirated 65 horsepower car: 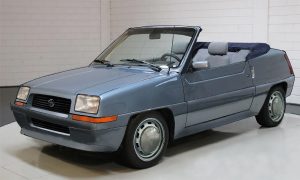 At the back, there’s no separate spare as on the original car, but there is a wheel shape on the trunk lid to echo that feature. I debated this one (too Lincoln/Superfly) but without it just lost that Metropolitan feel. However, unlike the tire shape on the back of a Lincoln coupe there’s really a space saver spare tire behind there (yes, I know that the Renault 5 we got here had the tire on the engine, but the later Supercinq did not). It’s a pretty high liftover but you could get fitted bags shaped and designed to look like your car, because I hadn’t gotten vomit-level cute with this thing yet. 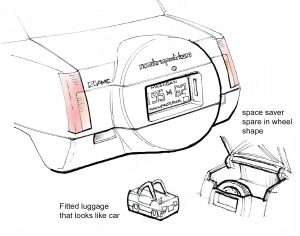 If you’ve never seen an original Metro, you would just see it as a funky looking fun car. The car actually ends up looking a bit like an earlier, lower Suzuki X-90, or more surprisingly like the squatty, squared-off cars that the cubic people drove in the Playskool McDonalds playset us Gen Xers had as kids: 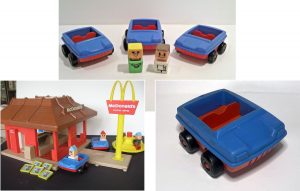 However, there was a request from the new Metropolitan owner on staff at the Autopian to make a more lurid two-tone version with the hardtop in place, just like the original car offered. 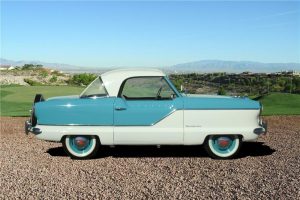 I had been avoiding this since I knew that while such a treatment looked good on the original in a fifties drive-in/sock-hop kind of way, on this tribute version it would likely be… a bit much. I was right – see below. It looks like a FILA sweatsuit, which is admittedly very period over-the-top (and would likely sell). I did try doing the zig-zag thing on the fifties version above but it just went too far (but I’ll give it a styling reference inside- you’ll see). 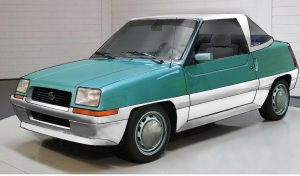 You could get those aforementioned alloys, but with this paint scheme they would be in a lighter ‘Ice Ice Baby‘ white-mica finish. Nash made prototypes of a wagon version of the Metropolitan back in the day, and it might have been possible to predate the Pulsar NX and offer a wagon-style full length ‘shooting brake’ hardtop for the car with a rear hatch to replace the trunk lid: 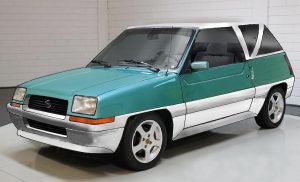 The interior has some odd features as you might expect. Essentially all of the gauges and controls are on a pod in front of the driver. The lights and climate controls stick out of the instrument binnacle like some kid’s robot toy.  Note also that the door panels feature that ‘zig zag’ form that was seen optionally on the sides of original Metropolitans. The alarm clock on the dash rotates to face either driver or passenger, and recharges when in place so you can take it with you into a hotel, your home, or wear around your neck. Yeah, Boi!!!! 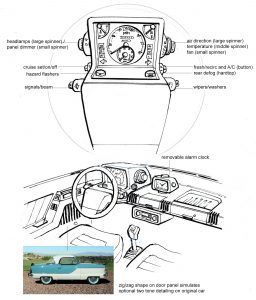 In back, the package shelf (like the original) would have worthless seats with the primary purpose of telling insurance agents and unconvinced spouses that the car is not a two-seater even though it really is. These seats would aim inwards slightly to push the legs of unfortunate occupants to the center. This ‘club seating’ arrangement was actually done on a Nash coupe back in the fifties:

The goofy-but-useful character of the original Metropolitan might have translated well into the Malaise world filled, bridging the gap between dull hatchbacks and ‘sports’ cars. Like all of the objects on The Island of Misfit Toys, they might not have been big sellers but they’d certainly have found someone to love them.