Sometimes I’ll start wondering about something and it’ll get stuck in my head until there’s nothing I can do but waste a bunch of time writing about it, making graphics, and publishing it right here, hoping you’ll read it and join me in my cycle of whatever. That’s where we are right now! Exciting, right? Of course it is. The thing that occupied my mind so much this morning was a simple question: how many rear mid-engined cars managed to have a somewhat-functional back seat? It’s not an easy thing to do, so I feel like those production cars that figured it out deserve some recognition. With that in mind, let’s recognize.

Again, to clarify: this is rear mid-engine cars with a back seat, not front-mid engine cars. All good?

Well, before we do that, we should probably define our terms as best we can. As I see it, there’s three main categories of where you can shove an engine in a (combustion-engined) car: front, middle, and rear. And, the “middle” category has two subcategories: front-mid and rear-mid.

To define these categories, I think the axle centerline method is best. This just means that if the engine is atop or mostly ahead of the front axle, it’s front engined. If it’s behind the front axle centerline, that’s a front-mid car. If it’s just forward of the rear axle, still between the axles, it’s rear-mid, and if it’s atop or behind the rear axle, it’s rear. Want a picture? You got it: 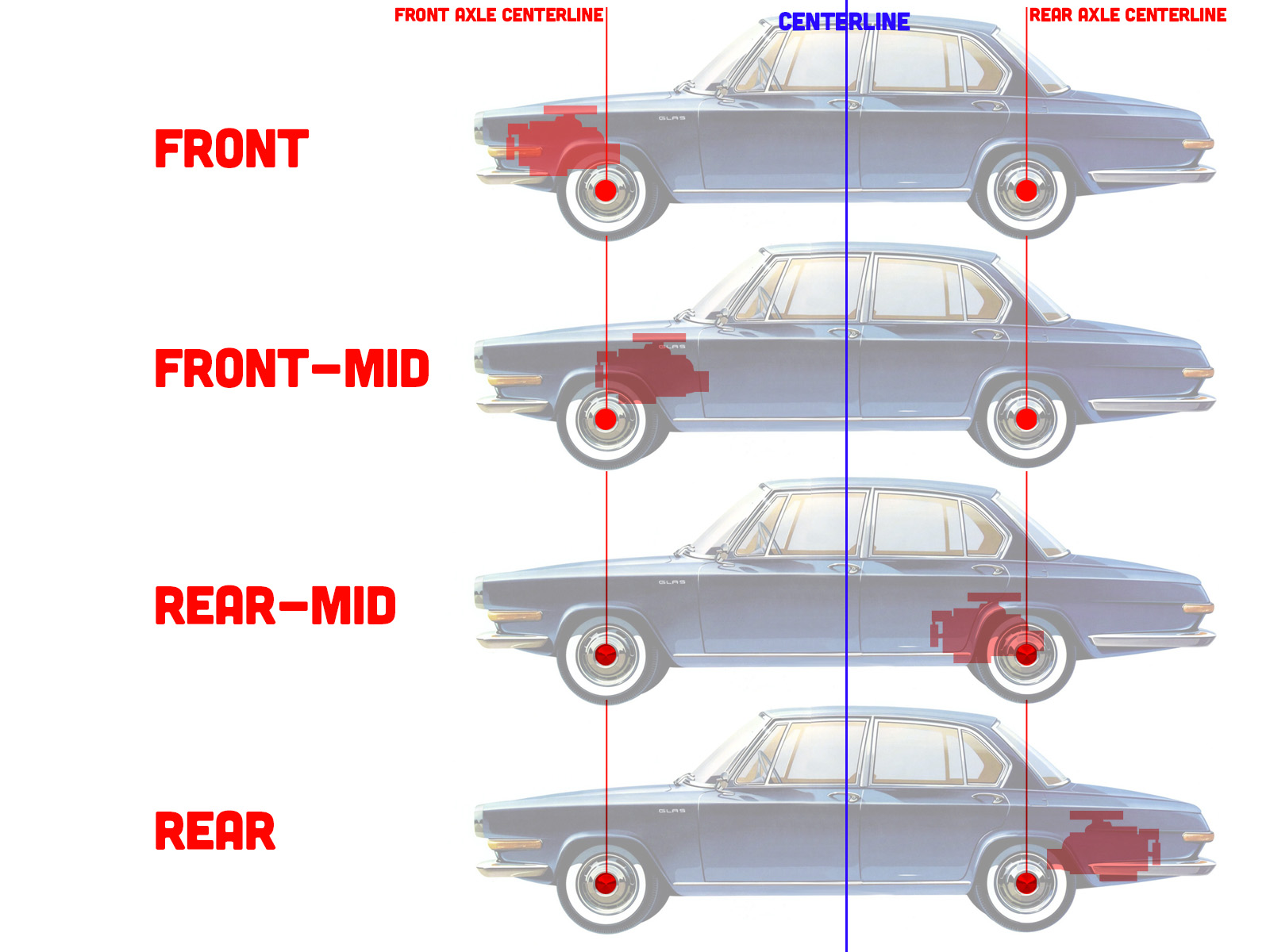 As you can see by that crude diagram, the rear-mid (or mid-rear; it’s funny, but I hear people say “front-mid” but almost never “mid-front,” and I hear “mid-rear” more than “rear-mid,” now that I think about it. I don’t know how those linguistic conventions ended up that way, but forgive me if I flip between mid-rear and rear-mid as I write this, because I’ve now confused myself and can no longer tell which one sounds weird) layout is clearly the most difficult when it comes to packaging a rear seat, because the engine is usually in the exact spot you’d stick a back seat.

The centerline divides front-ness from rear-ness, which is why something like a Toyota Previa, which has an engine well behind the front axle but ahead of the centerline is front-mid.

That’s why the vast majority of mid-rear engined cars are two-seater sports cars, like a Toyota MR2 or a Pontiac Fiero or a Porsche 914. Even with this packaging challenge, though, some carmakers have figured out how to crack this nut, and have made genuine four-seat, two row cars with the engine very much in the mid-rear position. It’s an impressive feat.

I think the cars that pull this off fall into two general categories: first, the Unquestionables, where the engine is very much, obviously in the middle of the car, well ahead of that rear axle. I can only think of, let’s see, five production cars that have pulled off an Unquestionable Mid-Engine Four-Seater, and none are really what you’d call volume production cars. But let’s look at them: 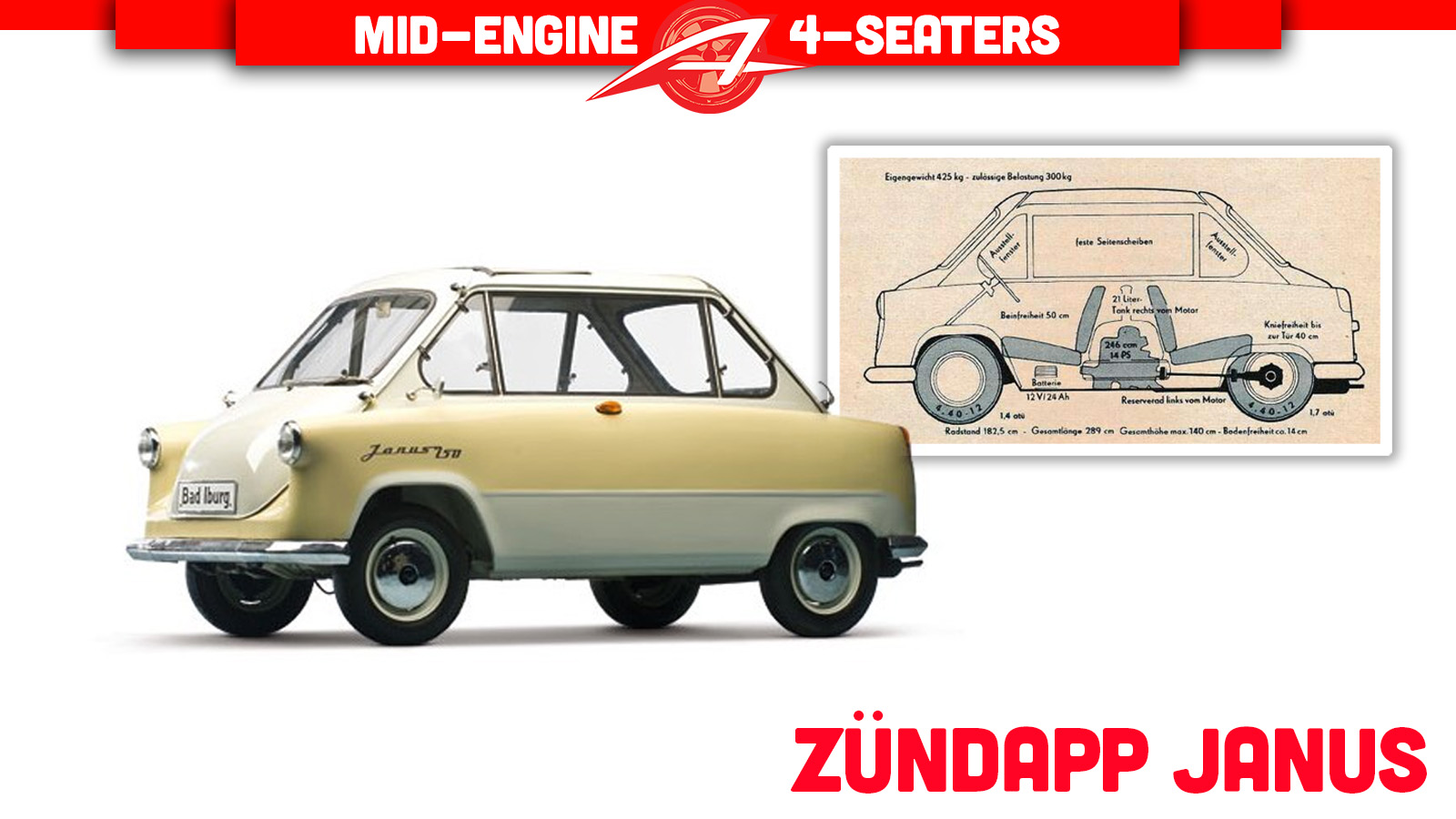 First, I think we have to acknowledge what is likely the purest expression of engine-in-the-middle-and-two-rows-of-seats, the Zündapp Janus, the funny and clever little microcar that’s like two BMW Isettas ass-linked. The engine is precisely in the middle of the car (it may be the only true mid-mid car out there), and there are absolutely a pair of bench seats, even if they can’t bear to look at one another. This is the most direct solution to the problem. 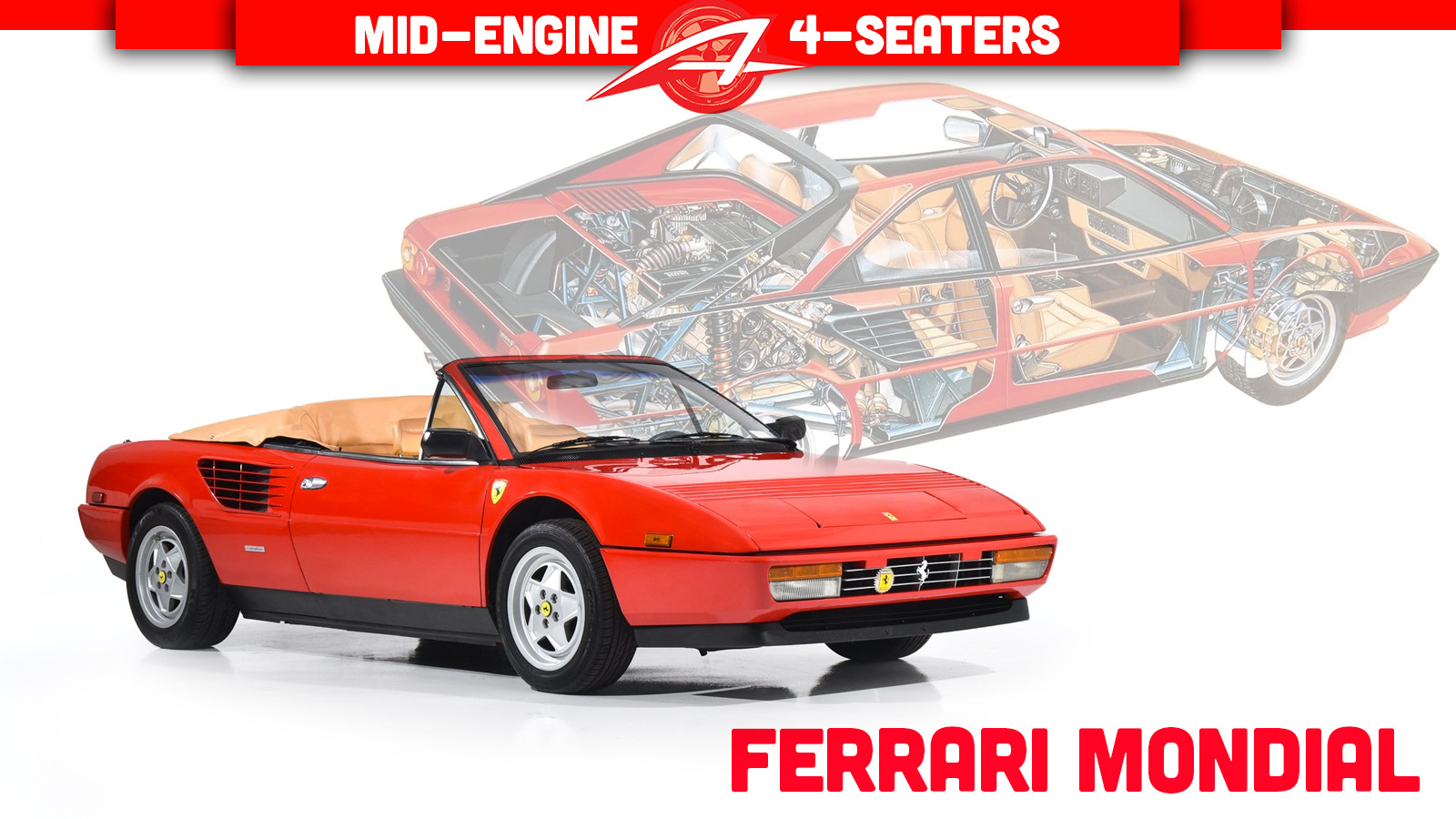 Our own stylish Brit design-man Adrian Clarke has one of these, and I think the Mondial might be the only one in this category to offer a convertible top, which makes it doubly impressive. It’s a terribly handsome machine, and Ferrari did a remarkable packaging job with cramming an engine and a couple of seats back there just ahead of the axle. Twin trunks, too! 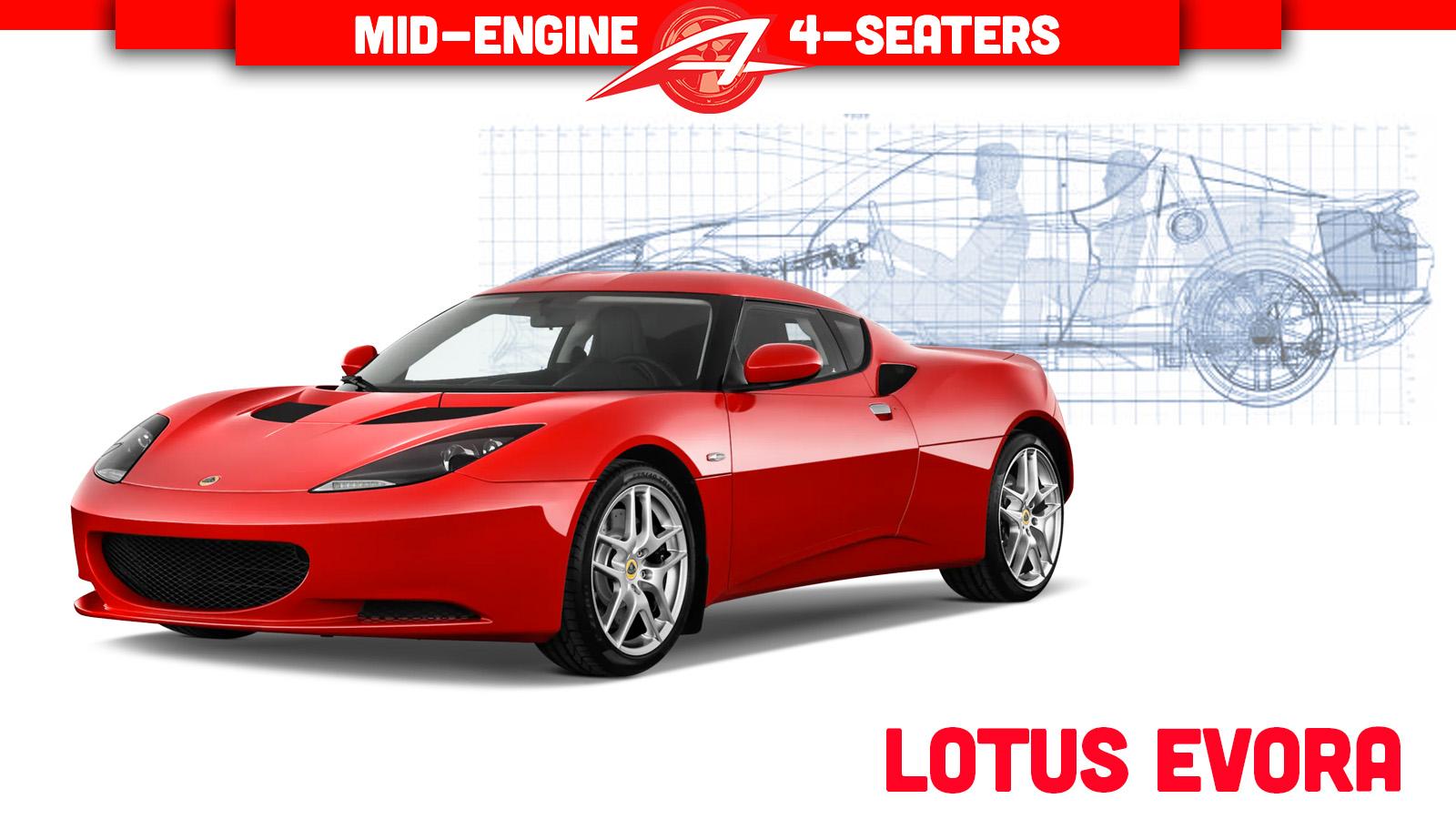 This is the only one of these that I’ve driven for any length of time, and I can confirm that the rear seats are usable, at least for a little kid. Though, that kid did have a bulky child seat, too. This is also a packaging marvel, especially considering how small the car is overall. The fact the engine is transverse helps a lot. 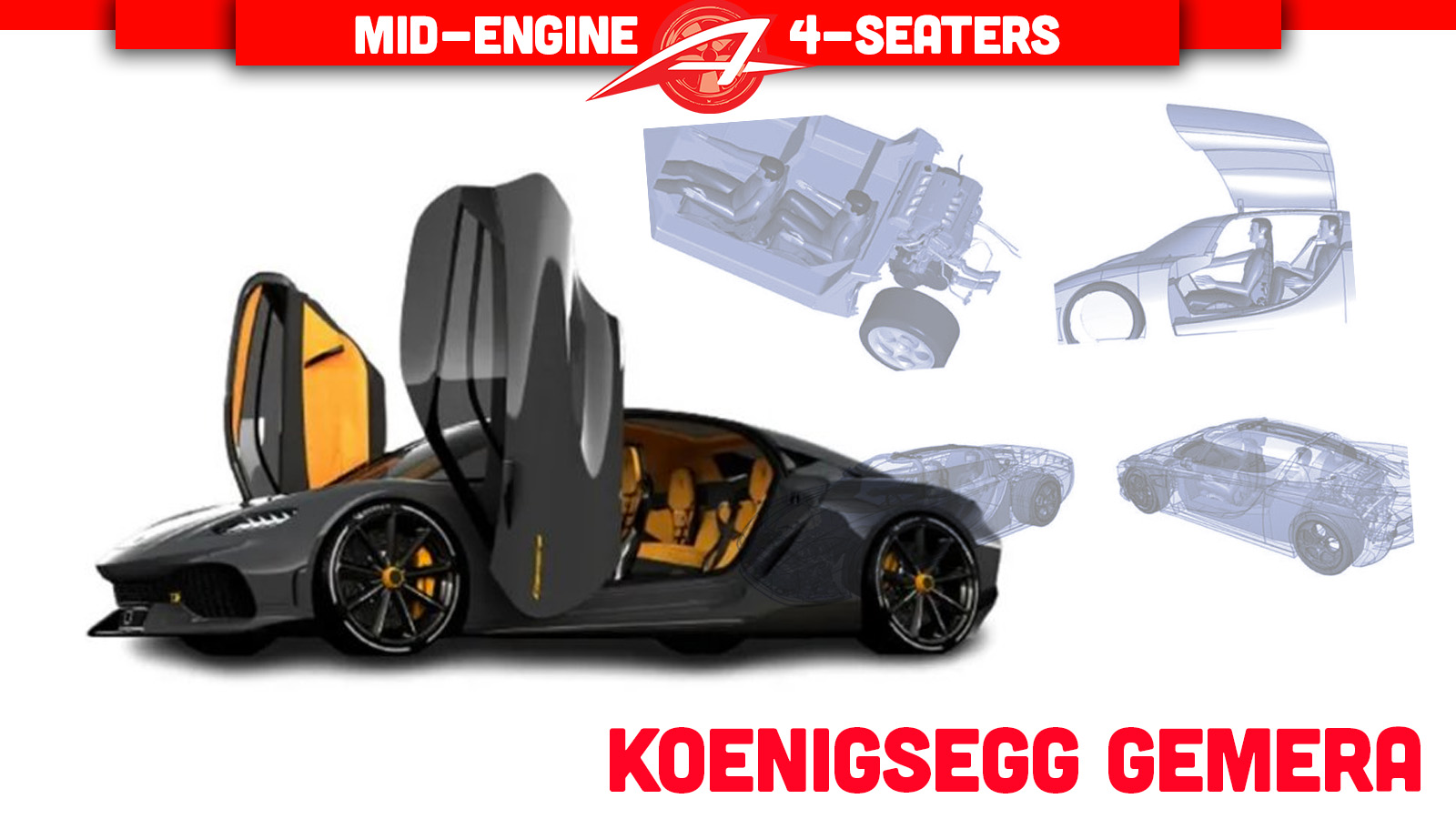 Koenigsegg’s approach to a two-row mid-engined car is pretty straightforward: make the whole damn thing longer. The Gemera is not a small car, so it’s not shocking they were able to slide a pair of seats back there. 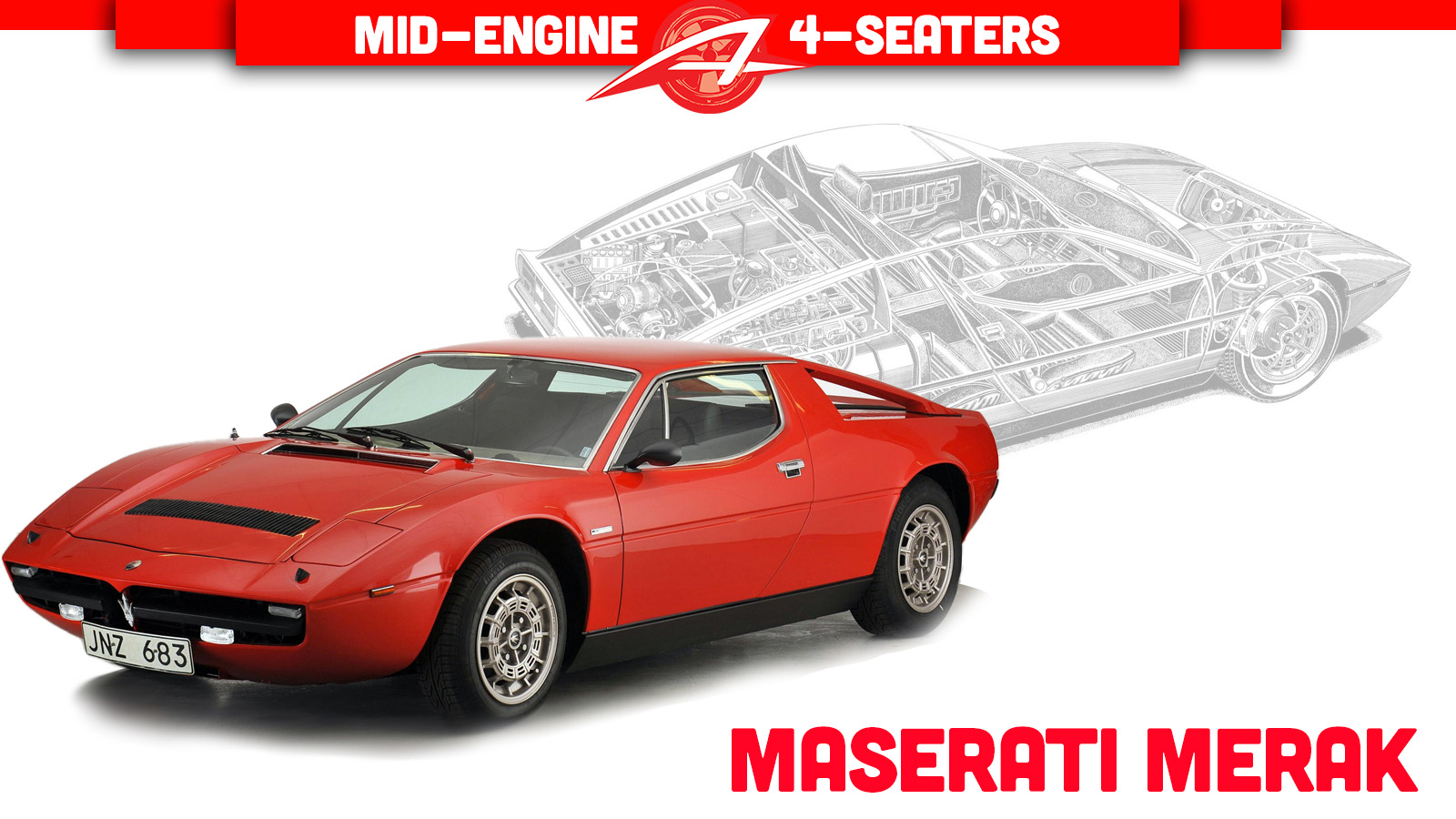 Another really lovely one, I think the Merak may be the most surprising, because it really does not look at all like something with a back seat. And yet, there it is, looking almost usable, even. The flying buttress C-pillar design really works here, too. 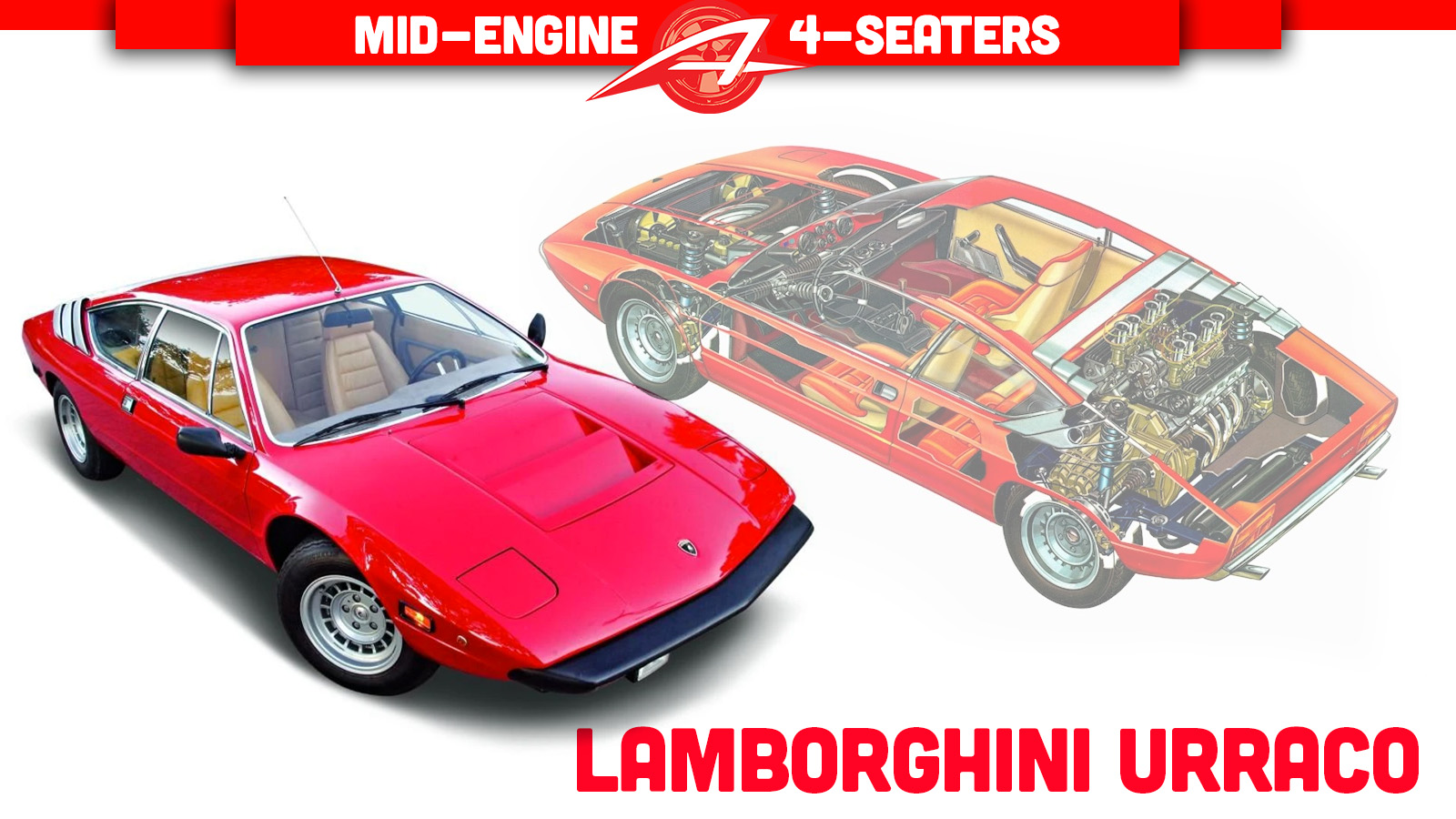 Thomas had to remind me about the Urraco; I feel like this Lambo sort of proves that three of the best-known makers of mid-engined cars – Lambo, Ferrari, Lotus – all had to take a crack at the rear seat in a mid-rear car problem. The Urraco partially manages to pull it off the same way the Koenigsegg did: by just being big. 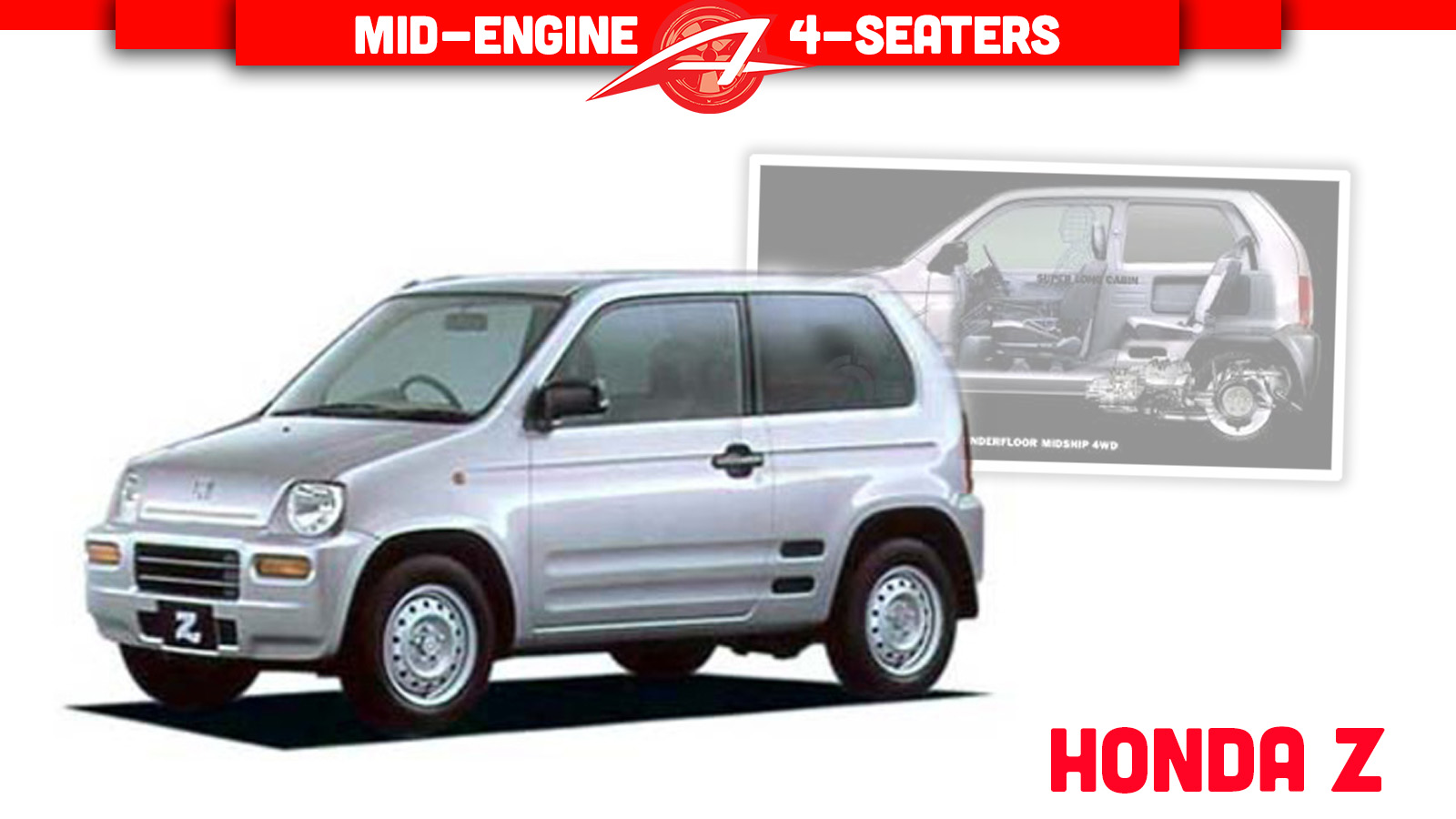 I forgot about my Hondas! Honda has a surprising number of unusual mid-rear-engined two-row cars, like this incredible Kei-class Honda Z with four-wheel drive and a tiny fun frunk and lots of sass. 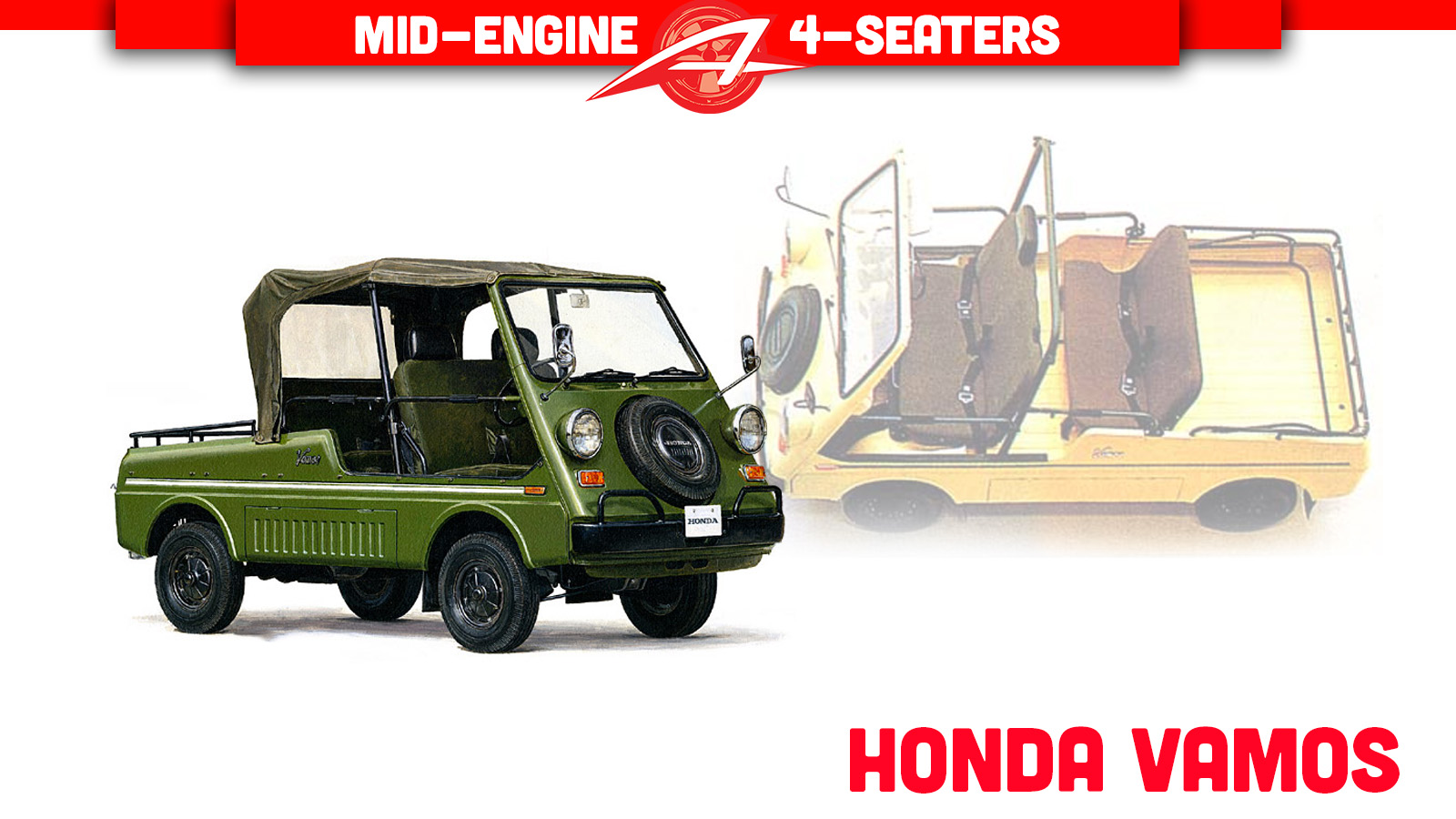 A kind commenter named Arch Duke Maxyenko reminded me of the Vamos, which I should have remembered, because I drove the damn thing!

I think that’s all that I’d put in the Unquestionable category; maybe some of you will differ, and, if so, I encourage you to tell me in the comments, or give your own examples, or just scream and punch a wall in the coffee shop or on the subway or wherever you are.

The next category I’m going to call the Borderlines, because they’re all technically mid-rear cars, but their packaging is so tight that most of them are really riding that line between mid- and rear-engined. Still, the Axle Rule is the axle rule, and these do have engines where the bulk is just ahead of the rear axle (or half-shafts), so they count.

These cars tend to be small city cars, a category that has traditionally been popular for rear-engined cars. Here’s the ones I think fit this category: 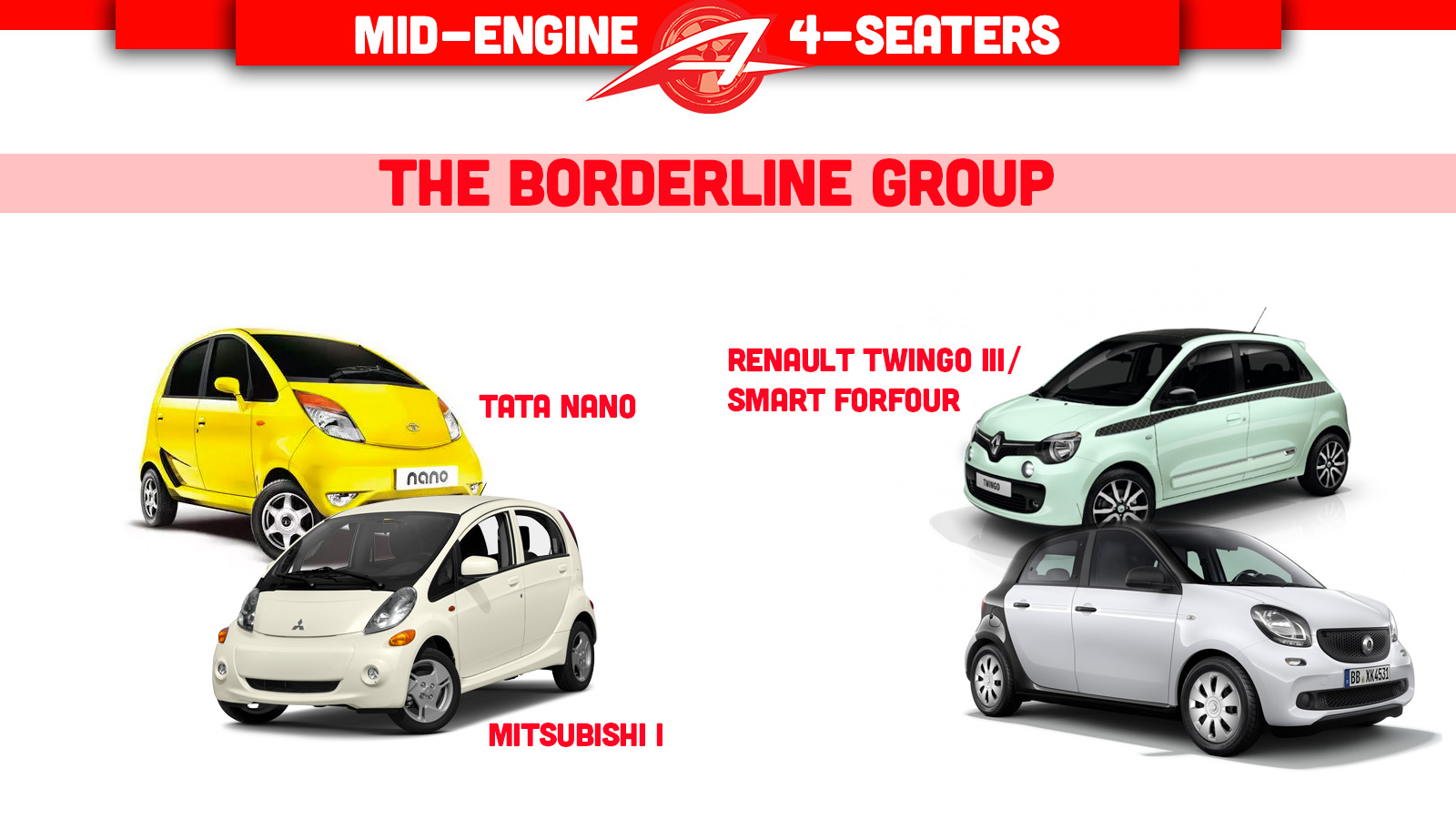 These are all quite similar: one-box (ish) city car designs with small engines located down low, under the rear floor, and in each case just ahead of the rear axles. They’re all almost rear-engined, it’s so close, but if you get under there and look, each of these cars has the bulk of the engine in front of the axles, even if the rear overhangs are so small that the engine compartment really does extend all the way to the rear.

These are actually very clever and space-efficient marvels of packaging, each and every one of these little van-ish things. This is a great layout, and I hope to see more of it.

The two-row mid-rear car was a rare novelty for the better part of a century, but with EVs becoming more and more common, I think we could find ourselves in a position where a motor mounted just ahead of the rear axle becomes not just common, but possibly the most common drivetrain layout.

It’s a good solution to the packaging problem, especially for a skate-board-chassis’d EV, and if it’s going to become a Big Thing, it’s even more important to take note of those who figured out how to cram another row of seating while sharing in-between axle space with a drivetrain, even when motors were hot, noisy, bulky things.

Did I miss any of these, in either category? Probably. Tell me in the comments!

I'm a co-founder of the Autopian, the site you're on RIGHT NOW! I'm here to talk to you about taillights until you cry and beg me to stop, which I absolutely will not. Sorry. Hug? Also, David's friend.
Read All My Posts »
PrevPreviousHere’s What A ’50s Nash Metropolitan Would’ve Looked Like In 1985
NextThe Mercedes-AMG S63 E Performance With 1,055 Lb.-Ft. Of Torque Is A High-Tech Dinosaur In All The Best WaysNext