We Are All Underestimating The Chevy Tracker

How is it possible that a $700 car has offered the single best ownership experience of any vehicle I’ve ever purchased, especially given that the vehicle is a Chevy Tracker, formerly called a Geo Tracker? That’s right, a Geo — General Motors’ bargain-basement brand — has impressed me in almost every way, and I cannot recommend it enough. Here’s why my $700 Suzuki-engineered Chevy Tracker has won my heart.

I really shouldn’t have bought my Chevy Tracker. I was supposed to have been reducing my count of cars, but then I saw an almost rust-free, manual transmission, four-wheel drive Tracker for sale on my local Facebook Marketplace, and since the seller couldn’t get the thing running when I stopped by to visit, he dropped the price from $1,600 to $700. That’s too cheap for my weak soul to resist. So this happened: 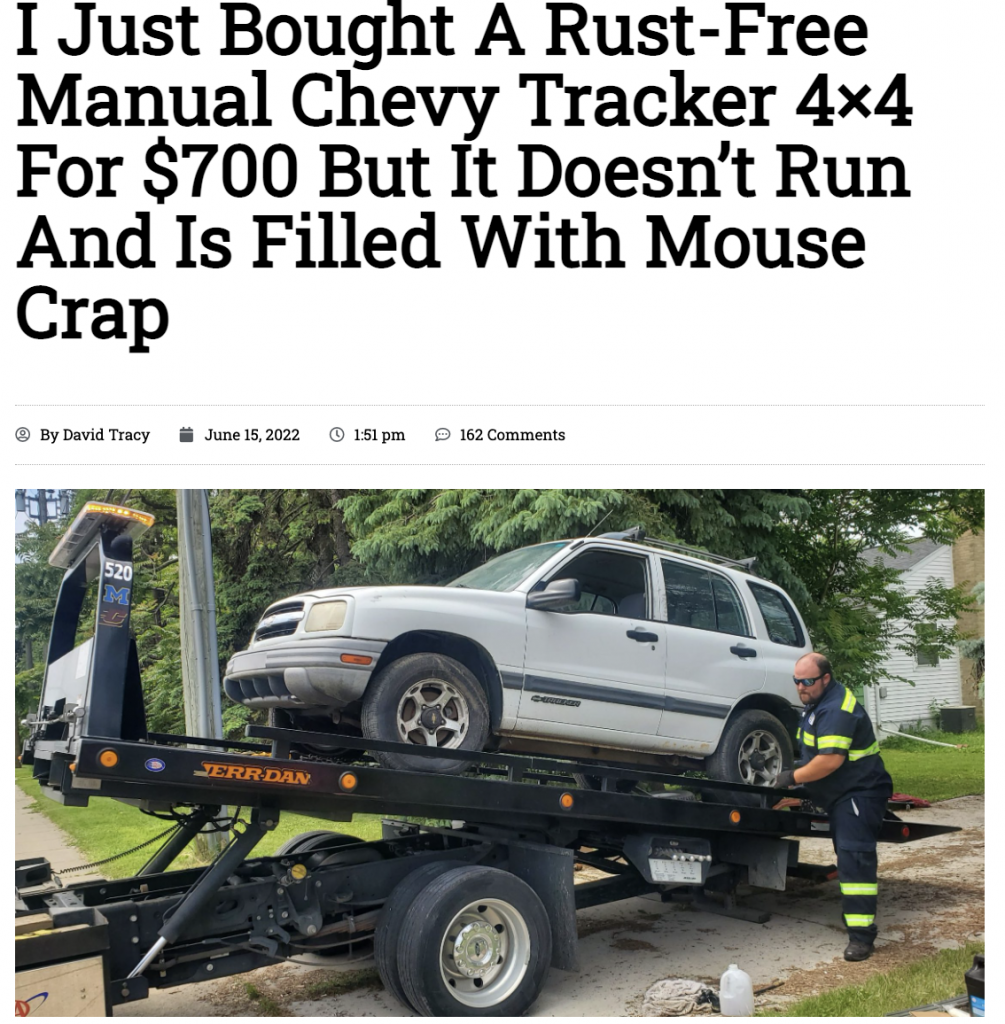 Upon having the car towed home, I immediately apologized to anyone who was hoping I’d reduce my car count and actually make progress in my personal life, writing:

Then I did what I always do when I buy a car I shouldn’t: I justified it:

It all sounded logical, and I bet I had one or two of you thinking “Maybe it wasn’t such a bad purchase? These are some strong points.” But I’ll be honest and say I was totally bullshitting. I was nothing more than an out-of-control addict. Here’s the thing, though: Six months later, I can confirm that somehow all of that bullshit I used to justify my purchase was correct; the Tracker is a gem of the highest order! Allow me to prove it to you. 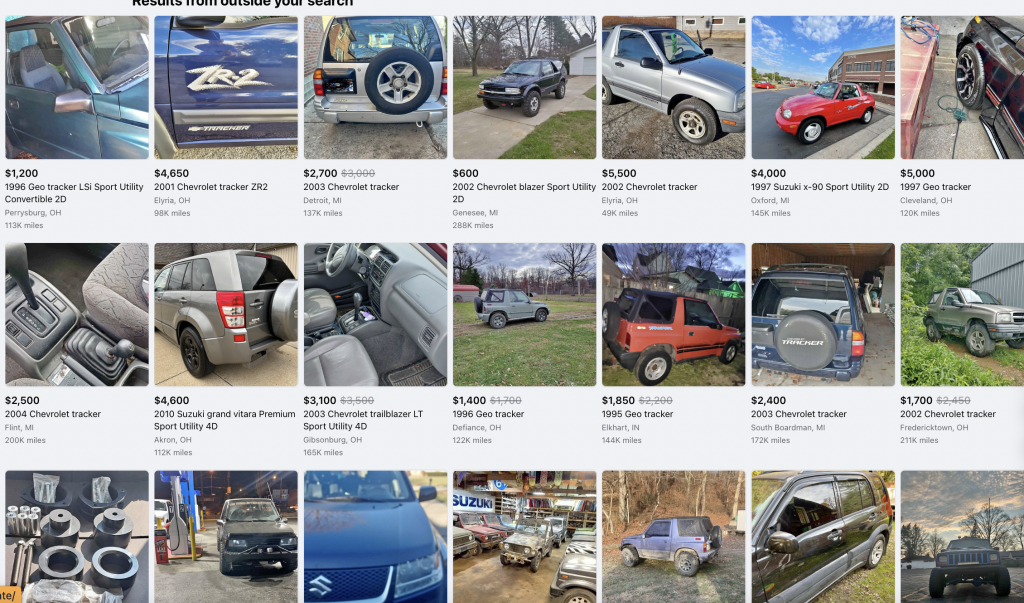 I won’t harp on this point, because it’s obvious, but just open up your local Facebook Marketplace or Craigslist, and type in “Tracker.” What you’ll find is mostly rustbuckets for about $1,500, but you’ll also spot nice, rust-free machines for about $2,500. And if you want to spend $4,500 to $5,500, you can get borderline mint-condition examples of these Japanese off-roaders. In fact, in the image above, there’s a 98,000 mile ZR2 for sale for $4,650, and that’s basically the Holy Grail of four-door Chevy Trackers. The $5,500 one up there has only 49,000 miles on it. It’s like a brand new car!

Why are these cars so cheap? Well, I think it’s as simple as this: Once a Geo, always a Geo. That’s how this works. People will always see the Tracker as a Chev-ified Geo, and not as a reliable Japanese car with a Chevy badge. It’s the same reason we’re all underestimating the Pontiac Vibe instead of loving it like the GM-ified Toyota Matrix it is behind that Pontiac badge, except I’d say we’re being even more unfair to the Tracker since its brand is even weaker than Pontiac. Like the Vibe, the Tracker was a joint-venture with a Japanese company, with an aim to bring Japanese manufacturing techniques into GM’s skillset; the Vibe was built at the NUMMI plant in Fremont, California (its cousin, the Toyota Matrix, was at TMMC in Cambridge, Ontario — thank you to Nick for the correction, here), while the Tracker and its cousin the Grand Vitara were built at CAMI in Ingersoll, Ontario in Canada.

[Note: I initially wrote that the Vibe shared platforms with the Echo; three Autopians called me out within approximately 0.003 seconds of publication, and honestly, I’m just impressed. For the record, I wrote that big article on the Vibe/Matrix back in the olden days, so I knew this, but I’m also a bit of a dipshit sometimes, so it’s nice to know y’all have my back! -DT]

All four of these vehicles deserve respect, because they’re all well-built machines that do their job exceptionally well.

Parts Are Plentiful And Not Expensive 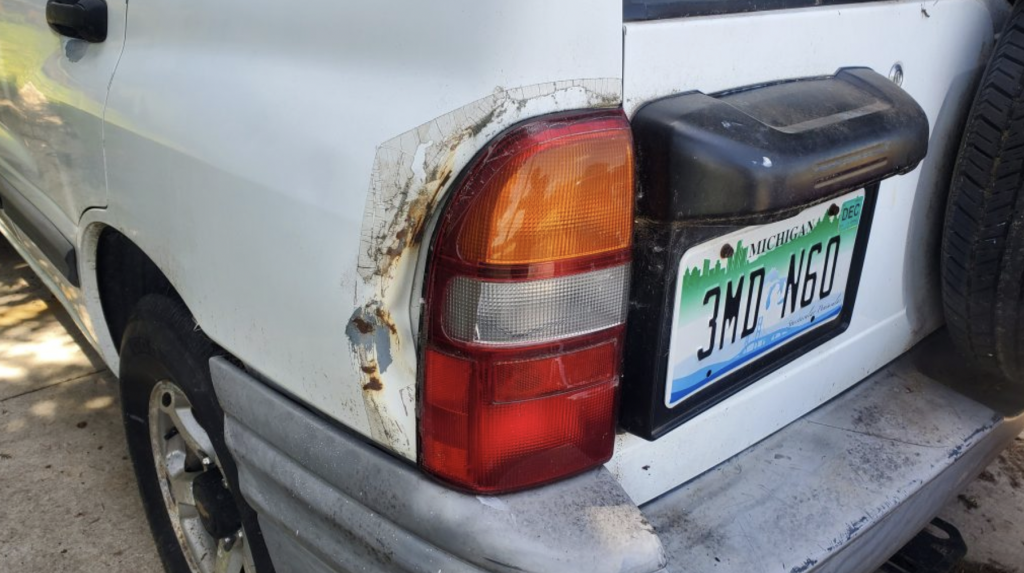 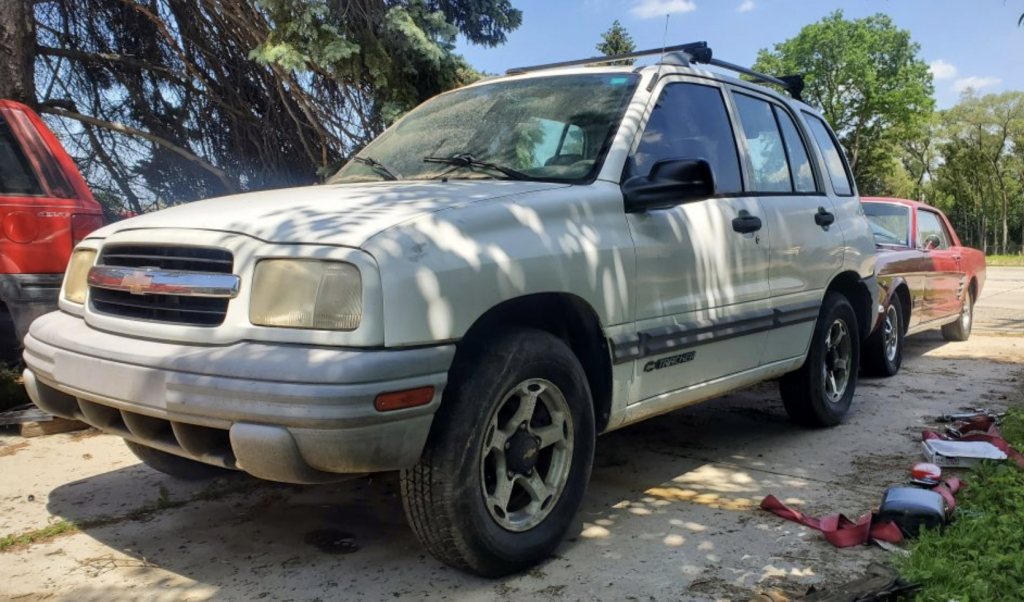 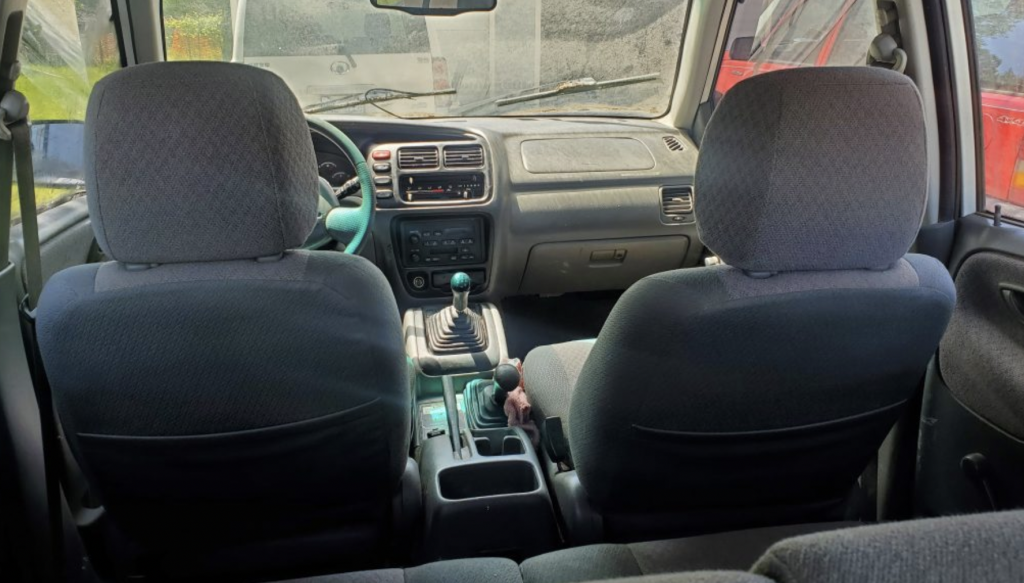 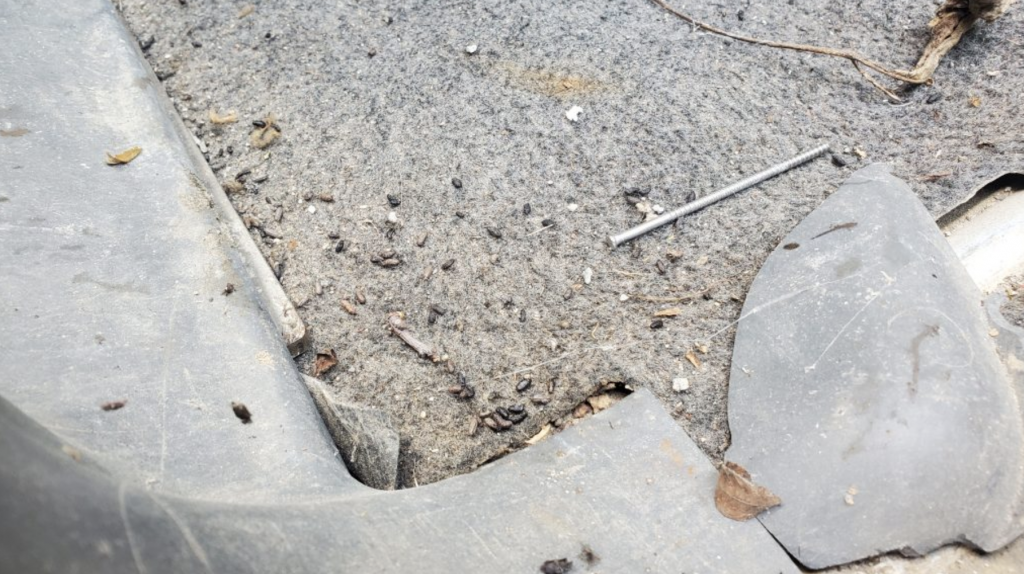 The only things wrong with my Tracker, shown above, were that it was filthy inside thanks, in part, to mouse detritus; there was a blown fuse from the previous owner reversing polarity on jumper cables; a crankshaft damper had failed, causing an under-charging and overheating issue; the steering was binding up; the tires were bad; the four-wheel drive didn’t work; and there was a big dent in the rear quarter panel.

Okay, so that was a bit more of a project than I’d hoped for, but the repairs were so easy. I felt like I’d made a grave mistake. I couldn’t figure out the charging or overheating issue at first, the four-wheel drive system had me puzzled, and I’d never bondoed a quarter panel before. But in the end, look at how the Tracker turned out: 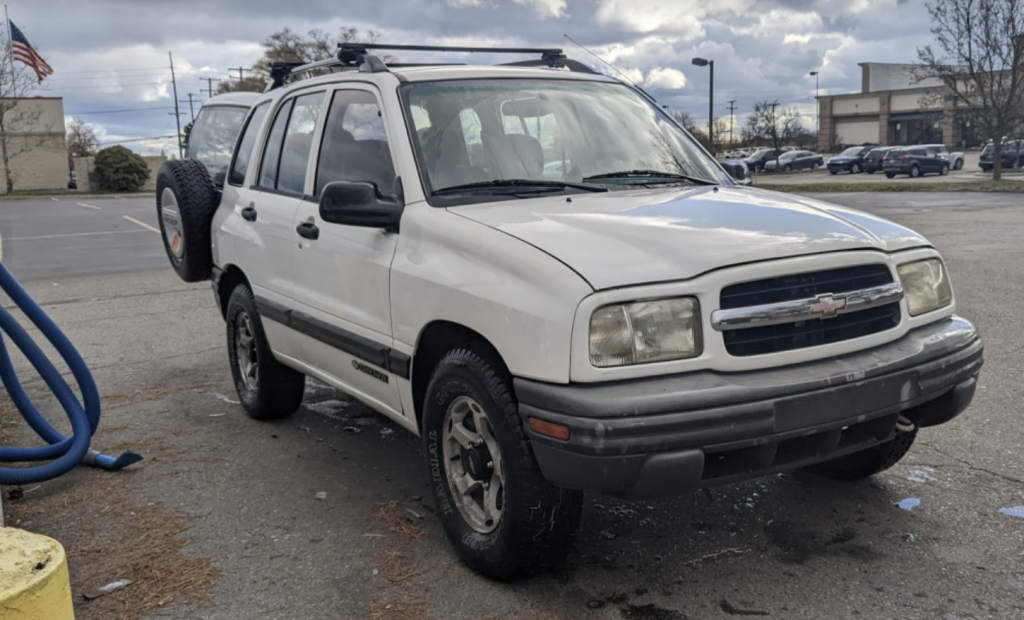 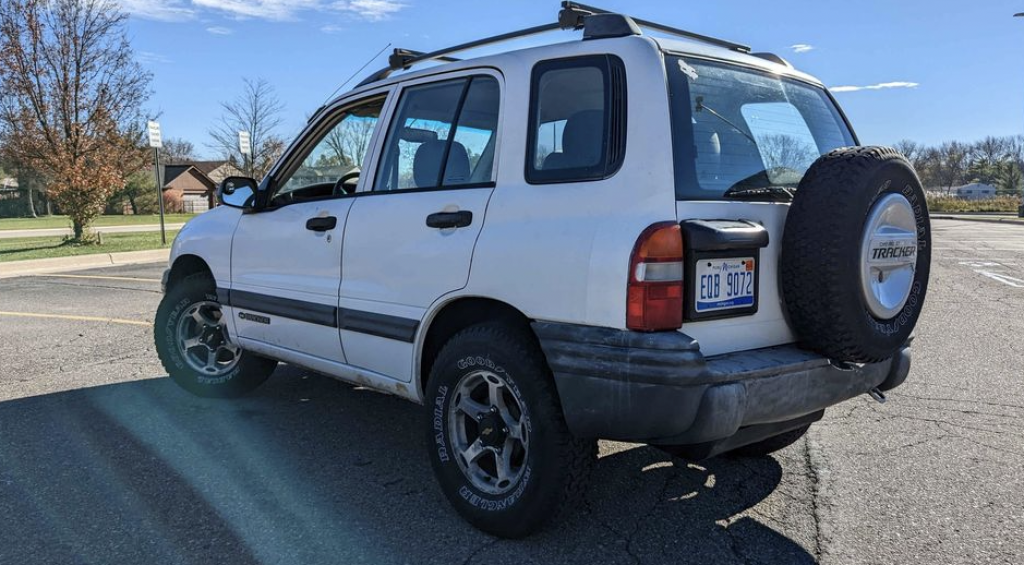 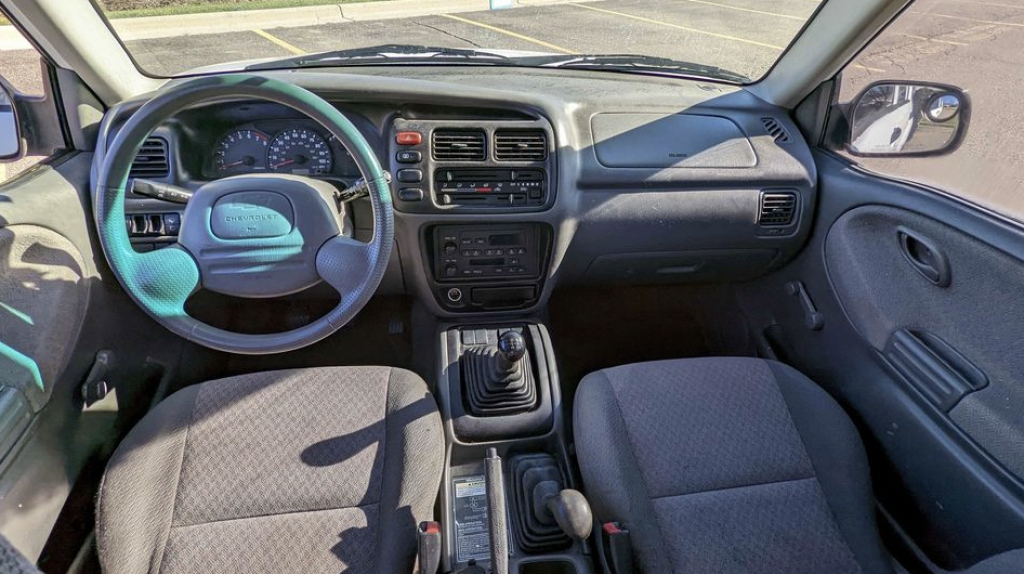 See, that’s the great thing about owning a Tracker: As long as you start with a solid body, you can get the thing into beautiful shape for very, very little money. Why? Well, for one, junkyards are filled with the things, so if you need obscure trim parts that you can’t find at a car parts store, that’s no issue. As for regular maintenance bits like alternators, water pumps, brake pads, and serpentine belts? It’s hilariously cheap — all of it.

Seriously, an axle shaft is $34 on Rock Auto:

Harmonic balancer pulley? $16 (okay, admittedly I scored a deal on this):

The $100 alternator and $100 ECU were pretty average in pricing, I’ll admit, but so many of the other parts are genuinely cheap to buy new, and even cheaper to buy at the junkyard, which almost certainly has at least one Tracker. Seriously, check out these Trackers in my local yard:

That red one is nice!

Anyway, what makes the Tracker great isn’t how good it looks when all cleaned up and outfitted with new/junkyard parts — it’s how it just works, day in and day out. I turn the key, it starts; I let off the clutch while in gear, it drives — there’s no bullshit. Let’s get into that a bit.

They’re Reliable And Easy To Work On 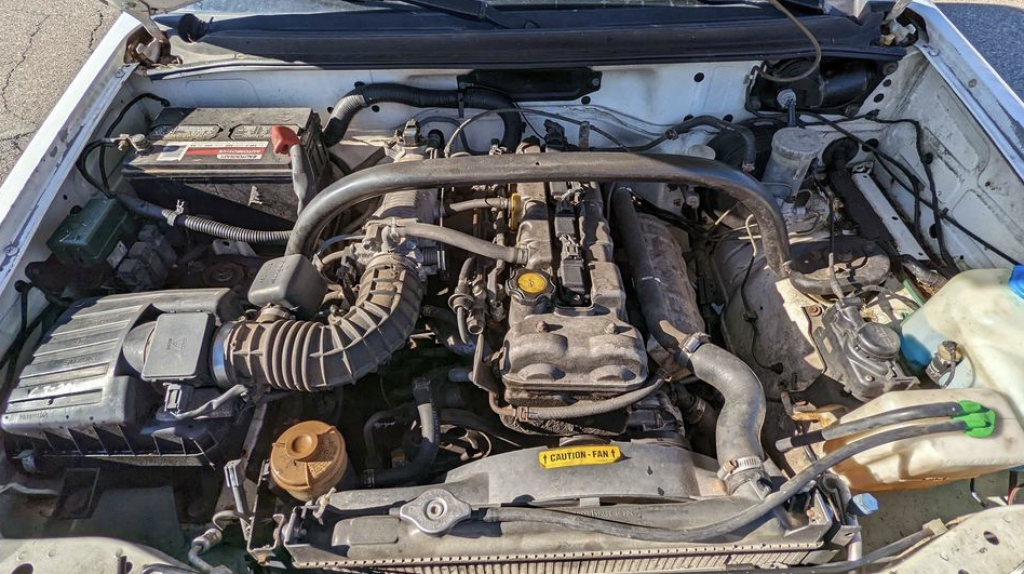 See that engine? That’s the Suzuki J20A, a little 2.0-liter four-cylinder with dual chain-driven overhead camshafts, port fuel injection, and an accessory-drive-driven water pump (none of this timing belt bullshit). The motor will last 200,000 miles with basic maintenance and 400,000 miles with a new timing chain tensioner. The five-speed manual hooked up to it is also solid.

Replacing things like the alternator or power steering pump is easy. Just slide out the radiator, which pulls straight up from the top after you’ve loosened a few 10mm bolts, and then everything is easy to access, and held together with either 8mm, 10mm, 12mm, 13mm, or 14mm bolts. Have those five sockets on hand, and you can take apart damn near the whole car. (Okay, you’ll need to add 16mm and a few big ones for suspension bits).

It’s an amazing car from a serviceability standpoint. You can get parts for cheap, and you can easily replace those parts without spending too much time. That’s about as much as anyone can ask out of a project car, right? 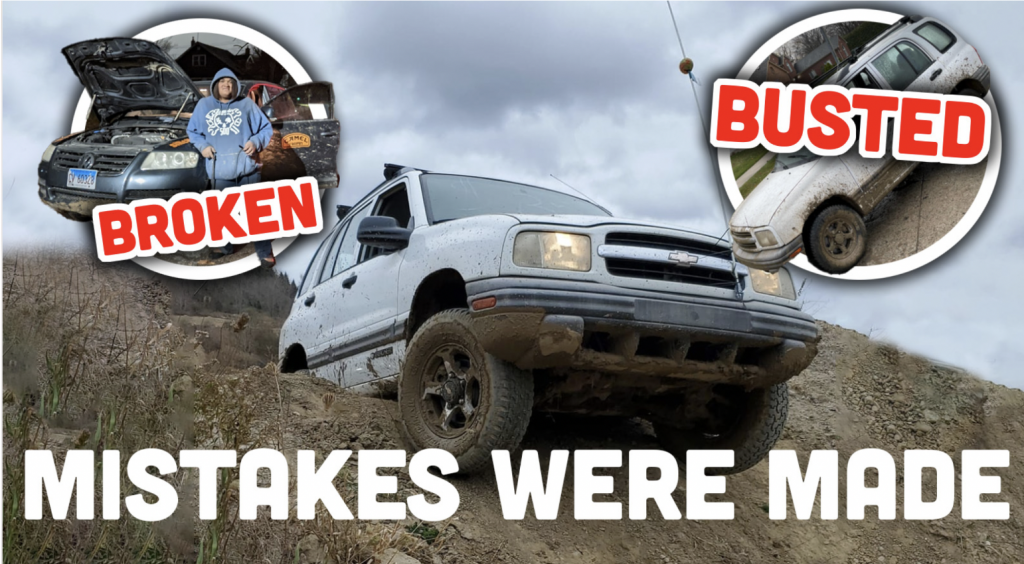 I may have smoked my Tracker’s alternator during my off-road trip with Mercedes and her Touareg, but that only took 15 minutes to fix, and otherwise the Tracker was an absolute monster out in the mud. I mean, just watch this little billygoat go!:

Here's @davidntracy putting his $700 Chevy Tracker to the test off-road. Expect a full writeup tomorrow on how the little Suzuki/Geo/Chevy handled the dirt, and why it ended up dead on a trailer shortly before @Miss_Mercedes30's cheap off-road VW Touareg left her stranded. pic.twitter.com/saSmQoCPkU 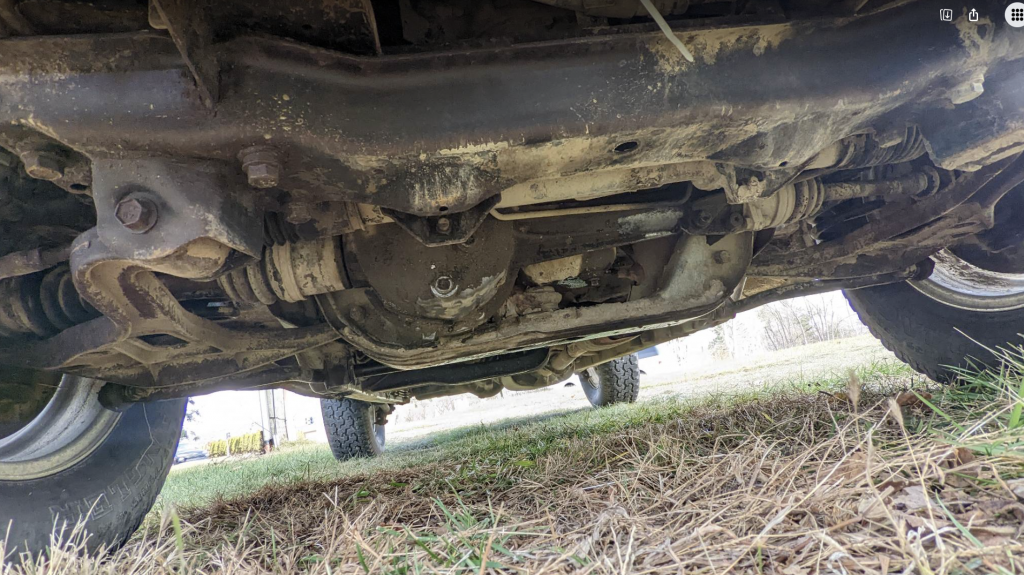 Maybe it’s because I’ve been driving solid front-axle’d Jeeps for the past 15 years, but every time I get behind the wheel of this Tracker I’m amazed by not just the ride quality, but the handling. It feels nimble! It’s smooth!

I wrote a few weeks ago that my body tends to betray my taste in cars; when I’m not thinking, I instinctively grab the key for the most comfortable car I own, even if it’s not my favorite one. That set of keys used to say “Lexus” on it, but now it’s a Chevy key. The Tracker is comfortable, and makes for a better daily driver than any of my Jeeps, if I’m being completely honest. 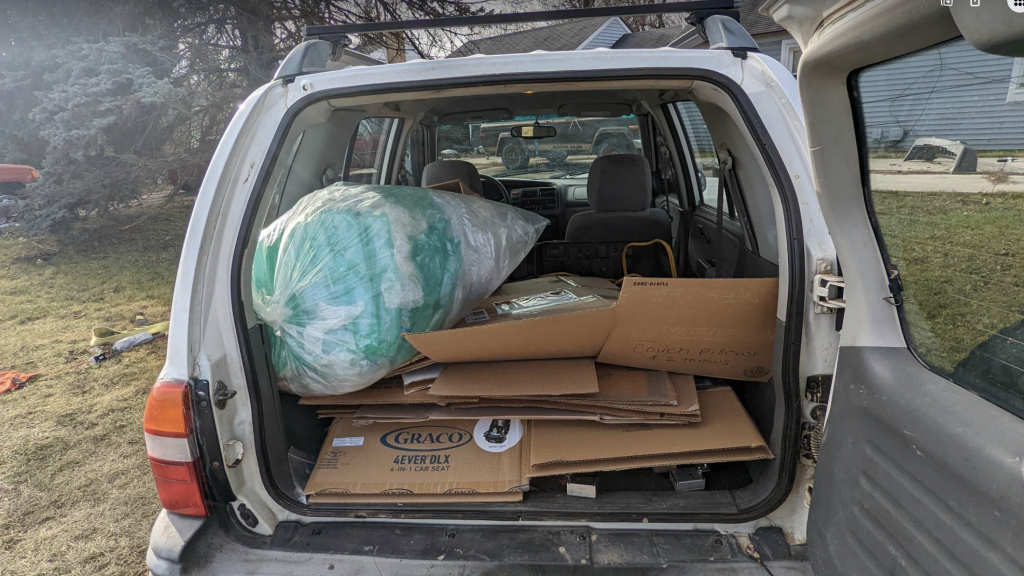 I threw my Tracker on a nearby industrial scale, and what I found was a curb weight of under 3,000 pounds; that’s remarkable for a four-door with airbags, automatic headlights, a full ladder frame, and four-wheel drive. You’d think it’d be cramped inside, but no! There’s tons of space; look at all those boxes I have in the back. Plus, seating up front is spacious; I bet a six-foot-eight basketball player could adjust the seat in such a way that they’re comfortable driving this little 4×4. It’s great.

As for fuel economy, it’s really not that bad given the off-road capability you get. Official fuel economy figures from the EPA are 20 city, 23 highway, 21 combined. I’ve been seeing over 20 on the highway, and around 19 in town with my oversized tires. 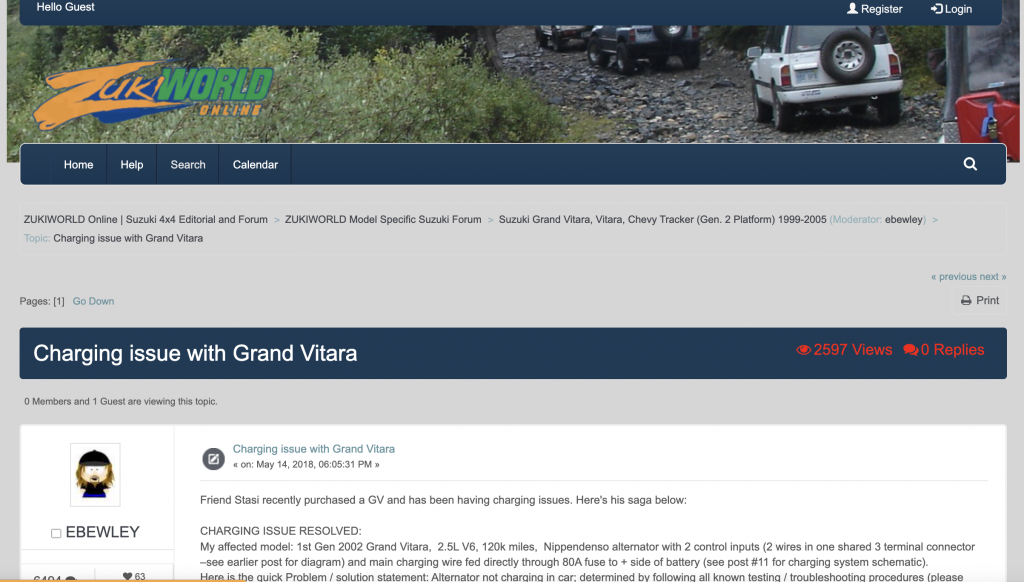 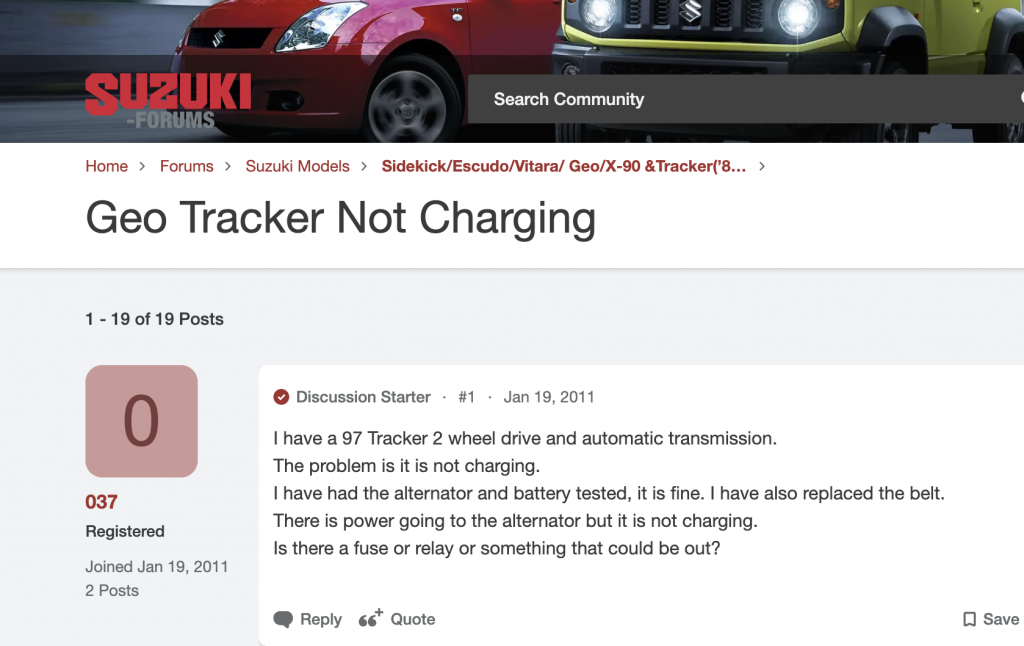 Perhaps the greatest thing about the Tracker is that it’s a truly global car. It’s sold as the Suzuki Grand Vitara in pretty much every country on earth, sans the U.S., and as such, the expertise about this car is everywhere. Check out Suzuki Vitara forums, and you’ll interact with people from Europe, Southeast Asia, Central America, Australia, and pretty much everywhere else. The Tracker is a globetrotter, and it’s been built in high enough volumes that there’s a good aftermarket for it, should you want to make upgrades. More importantly, if something does go wrong, rest assured you’ll find someone out there who knows how to fix it.

I’ve always been a big Jeep Cherokee XJ fan, and I truly believe it did more to bring the American masses into the off-road world than perhaps any other vehicle from the past 50 years. But it’s not the deal that it once was, and I truly believe that, in some ways, the Tracker has taken the mantle as the entry-level off-roader for the everyperson. It’s not quite as capable off-road as an XJ, but it’s 90 percent there, and 50 percent the price. I didn’t expect to be so sad that mine will be gone soon.