Facebook-f Twitter Instagram Rss
Menu
Menu
Home » You Can Score $7,500 Off A Tesla Model 3 Or Model Y Until January 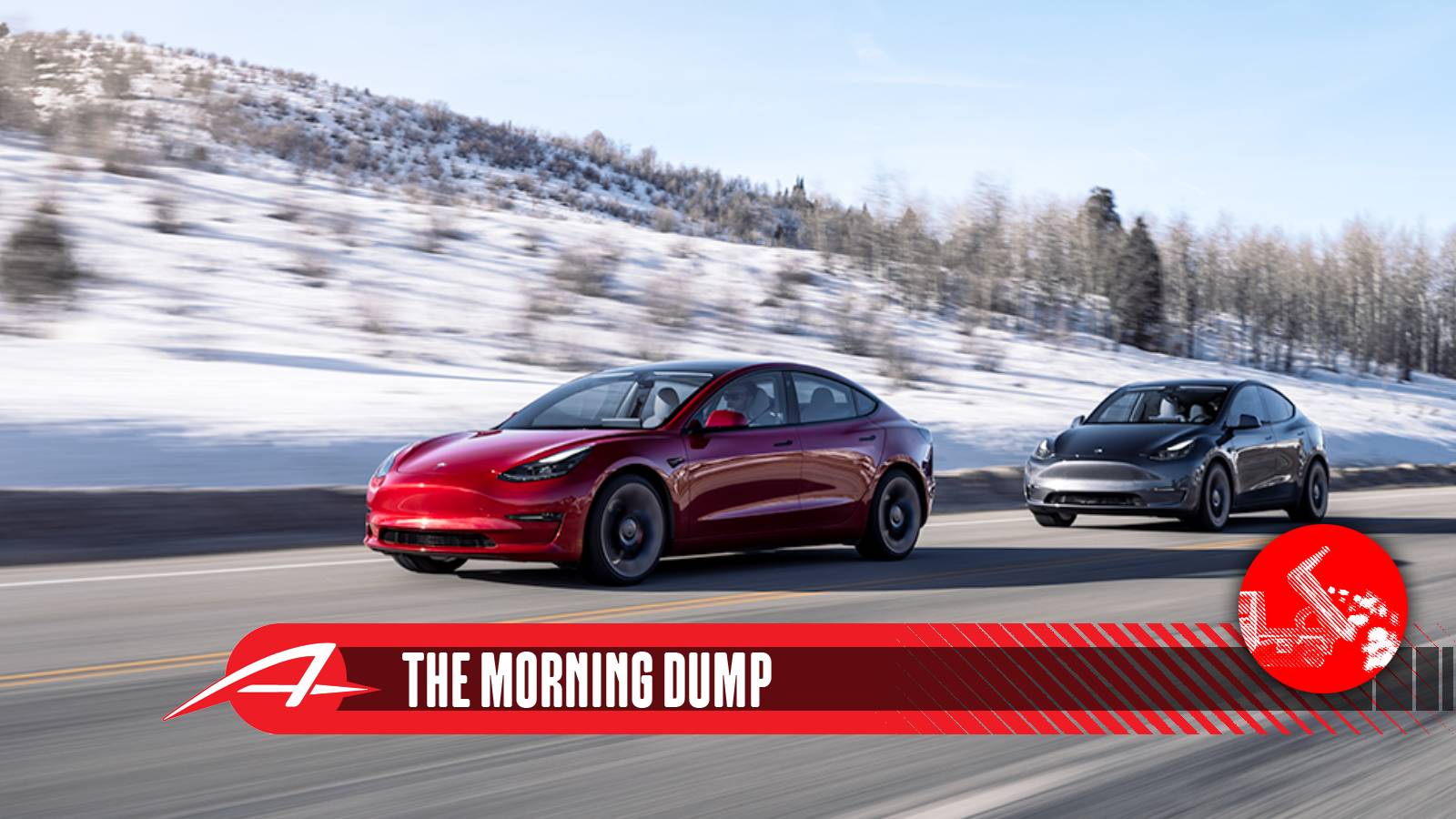 O come, all ye faithful, and get your hot car news from The Autopian because we’re not slacking off even though we’re only a few days from Christmas and a week from New Year’s Eve. Reading material for your morning constitutional today includes rare discounts on the Tesla Model 3 and Model Y, some bad end-of-year news for CarMax, and an update on solid-state batteries at BMW. Let’s ride. 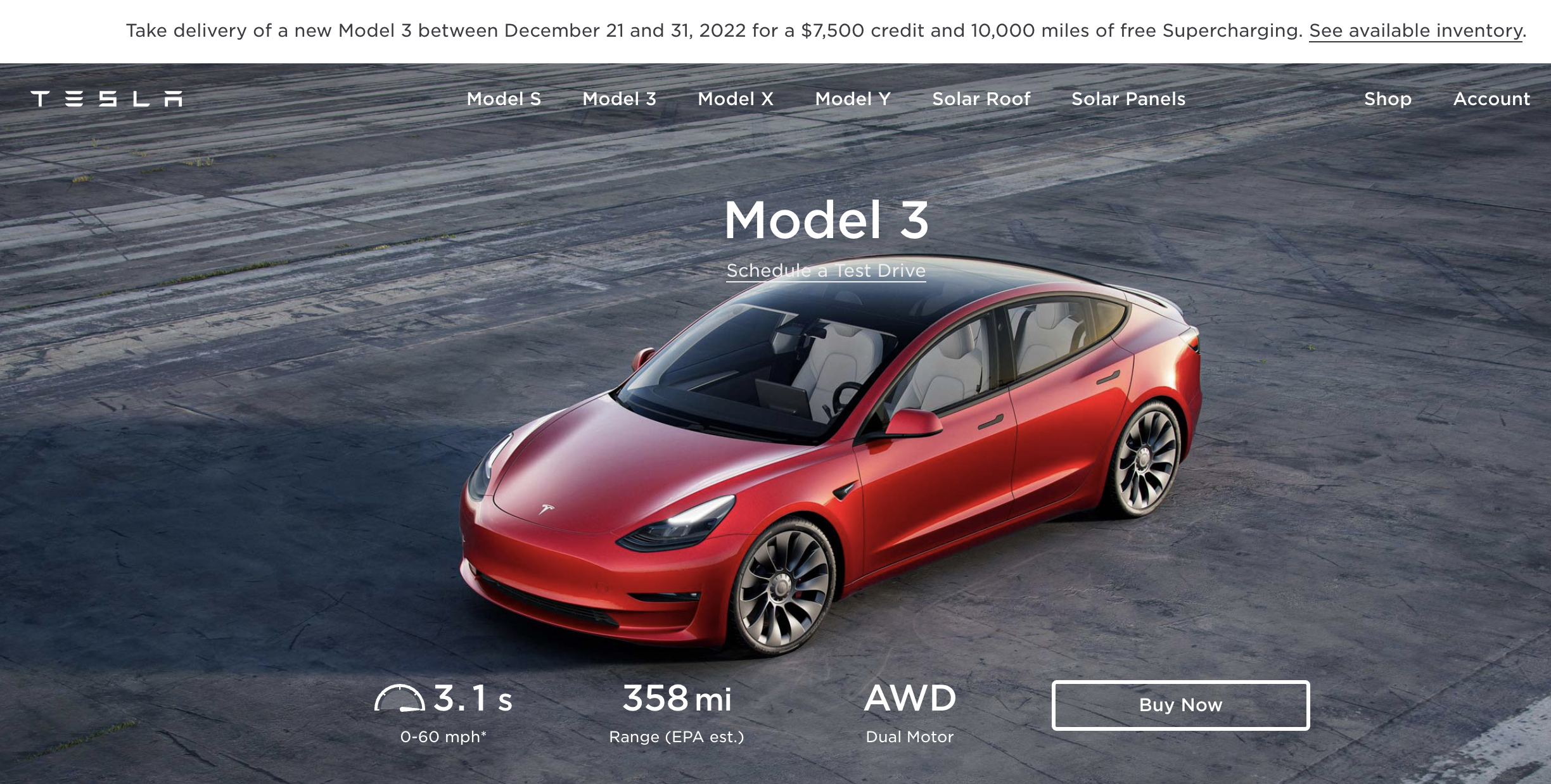 Yeah, we need a better name for Tesla’s very rare end-of-year discount celebration, and I haven’t had enough coffee yet to figure it out. But if you’ve been eyeing a Tesla Model 3 or Model Y this month—or what’s left of this month, I suppose—you’re in luck.

Reuters reports Tesla is offering $7,500 discounts on both of its top-selling EVs this month. That’s an increase from the $3,750 credit Tesla was already offering on those cars. And as we reported yesterday, this new bigger discount comes just weeks before Tesla stands to get its full $7,500 federal EV tax credit back under new rules implemented by the Biden Administration’s Inflation Reduction Act.

(By the way, the new EV tax credit rules for 2023 are extremely confusing; Mercedes wrote a guide that may help you, and so did I; the always-great Consumer Reports has a useful one, too. The point is, forget what you think you’ve known over the past 10 years or so because the full tax credit is aimed at EVs built in North America now, and it gets even more complicated when we start talking about batteries.)

Why is Tesla doing this now, on Dec. 21? Reuters says it’s all about orders and showing those EOY sales/delivery figures; apparently “customers have canceled their orders and held off their purchases until the new credits take effect in January, weighing on Tesla demand.” That’s not going to look good when Tesla already said it would miss its delivery target this year. Basically, offering the $7,500 discount now instead of in January is a way to drive up those numbers a bit.

Here’s more, plus good news for our pals in Canada and China:

“The fact they seem to be cutting price to increase deliveries volumes doesn’t raise confidence, particularly at a time where we see increasing competition,” Craig Irwin, a senior analyst at ROTH Capital Partners, said.

The rare discounts follow a series of price hikes over the past couple of years by the automaker, which blamed supply chain disruption and inflation.

Tesla’s had a rough year on a lot of fronts thanks to supply chain issues and crackdowns on Autopilot, and lately, more and more analysts and allies are complaining that its CEO’s new side hustle running Twitter isn’t helping things.

Anyway, if you were going to buy a Tesla in January, you can do it now instead. Elon could use a little pick-me-up, I’m sure.

CarMax Is Far From Merry This Holiday Season 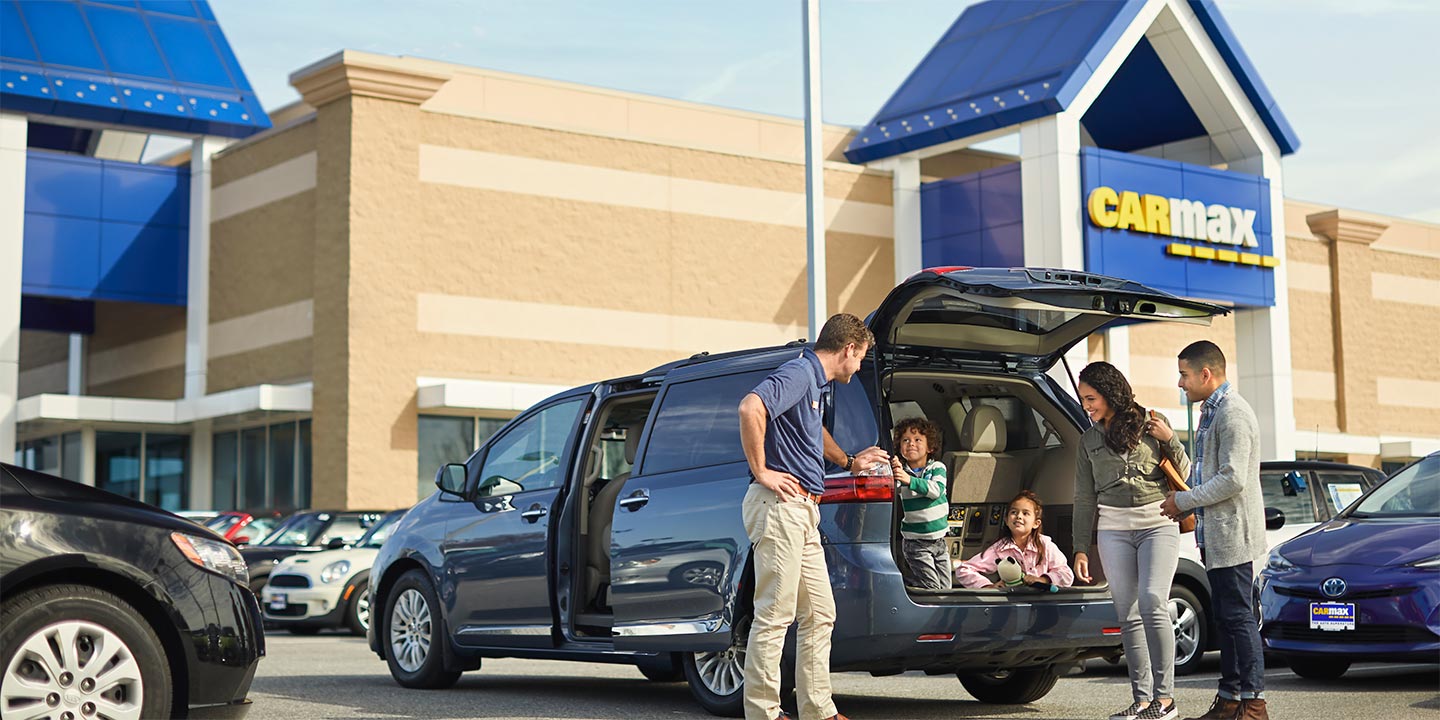 I’ll tell you who’s probably very eager for this year to be over: CarMax, everyone’s favorite supplier of unlimited-warranty Land Rovers. America’s entire supply of used cars has been utterly depleted by the supply chain issues that disrupted new car production, as well as rising interest rates and cuts in overall consumer spending.

As a result, CarMax’s quarterly profit is down 86% vs. the previous year. Woof. The company is now even pausing a share buyback

The Richmond, Va., used-car retailer said net profit for the three months ended Nov. 30 was $37.6 million, down from $269.4 million a year earlier.

Revenue fell 23.7% to $6.51 billion from a year earlier. Analysts were expecting sales of $7.16 billion, according to FactSet.

I say again: woof. And it’s hard to see any end in sight to this. My professional opinion remains that it’s kind of a garbage time to buy a car, even while some good deals are to be had here and there. 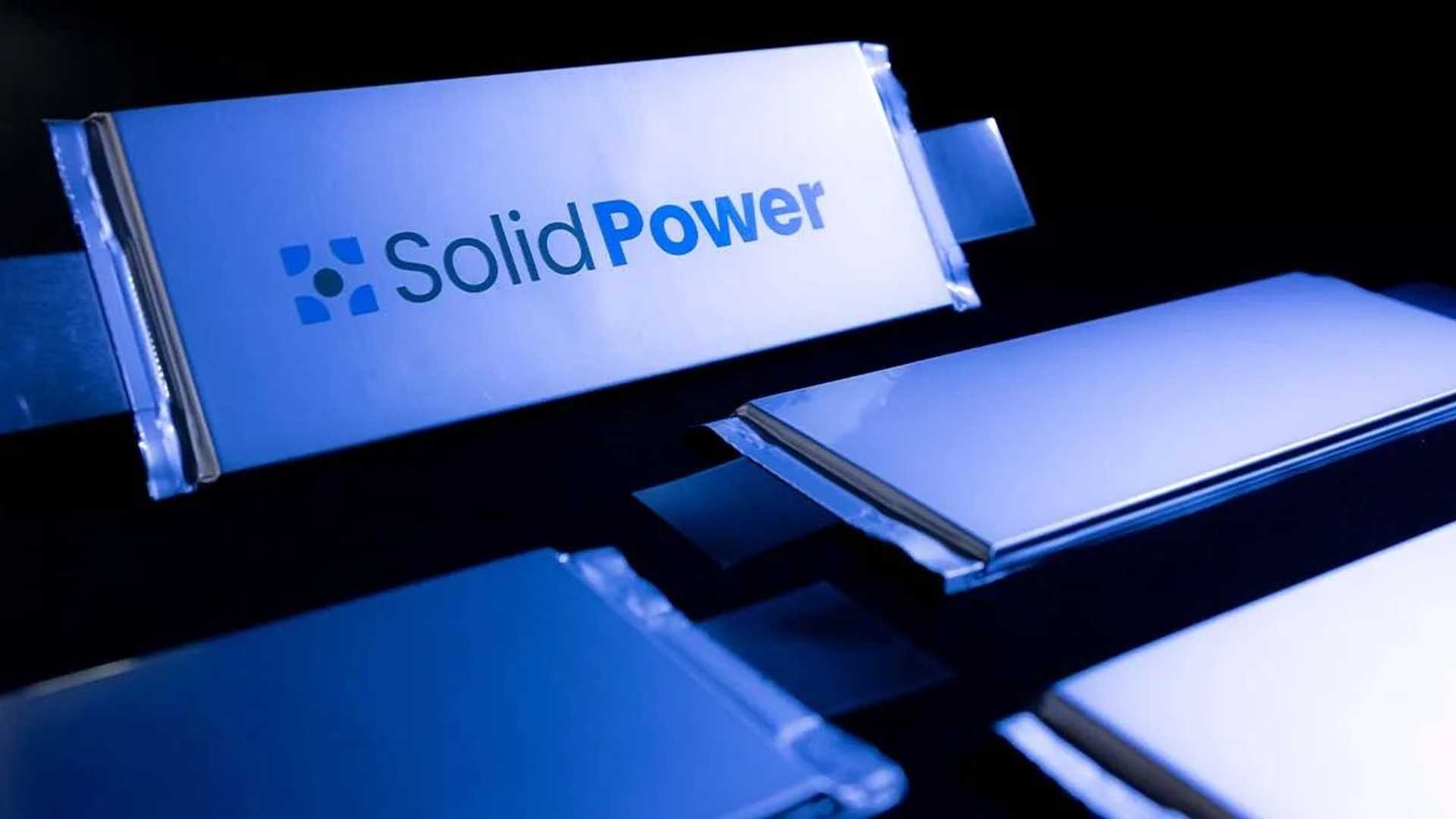 Solid-state batteries—EV batteries that contain a solid material as an electrolyte inside the battery cell instead of the usual liquid—remain the White Whale of the car industry. If anyone’s able to deliver on them, they could in theory promise significantly greater energy density, faster charging times, less real estate in the car and fewer of those pesky fires. They have proven quite elusive to develop thus far.

The last time I talked to a top BMW engineer working on this technology, he said it’s at least 10 years away from viability, and any number of years after that from production and implementation at scale. But BMW and Ford are both invested in Colorado company Solid Power, hoping that company could be the one that makes the breakthrough.

Now, BMW says that it will produce Solid Power batteries on its own lines. Here’s Reuters once more via Automotive News:

Solid Power said it will offer some intellectual property rights related to its solid-state batteries to BMW and allow production of the battery cells at the automaker’s facilities in Germany.

Colorado-based Solid Power will license the cell design and manufacturing processes to BMW, which will pay the company $20 million through June 2024, subject to certain conditions.

BMW intends to duplicate Solid Power’s pilot production lines at its own plant in Germany and produce prototype cells based on Solid Power’s proprietary technology.

“Subject to certain conditions” means meeting certain performance development milestones, but basically if solid-state batteries from this company work out, BMW wants to be at the forefront. “We expect this agreement to accelerate the installation of our solid-state prototype line and our companies’ mutual goal of commercializing this promising cell technology,” BMW management board member Frank Weber said in a statement.

Remember, Henrik Fisker completely gave up on this stuff a year ago. Maybe BMW and Solid Power will have more luck.

Are you considering buying an EV next year? Or even before we close out 2022? What would you consider?

I would really love to (though I see myself running a gas car concurrently, at least for a while) but man, the costs are through the roof and the inventory is terrible.

Elon Musk Sells $3.6 Billion In Tesla Shares For Third Time Since Saying There Was No Plan To Sell More

Editor-at-Large at The Autopian.
Read All My Posts »
PrevPreviousConquering Snowmageddon: 2004 Subaru Outback vs 1991 Honda Civic Wagon RT4WD
NextHere’s What A Ford Mustang Raptor Would Look Like If Our Professional Designer Had His DruthersNext