A Man Wanted To Travel Like A King, So He Built Three Massive Camelot-Themed RVs

One of my favorite things to do is take a peek through RV history to see what wild ideas builders have had. Every time I think I’ve found the snazziest or most eccentric RVs out there, another awesome piece of history pops up. This time, we have something opulent, rare, and just a little weird all at the same time. In the 1970s, Richard Edler wanted to travel with his family and four Saint Bernards in comfort, so he built the massive Camelot Cruiser as a luxurious way to travel. Then, he built two more.

The story of this trio of opulent RVs starts with Edler & Company Inc of Morton Grove, Illinois. Originally formed in 1938 as Atlas Van Lines, this company specialized in third-party logistics. The company also incorporated Edler Warehousing LLC in 1962, and it continues to operate today under that name and Edler & Company, offering warehousing, inventory management, and distribution. A vintage photo on Edler Warehousing’s site shows that in decades past it offered storage and moving services. Atlas Van Lines is still around today as well, and you’ve probably seen the company’s trucks during a road trip. 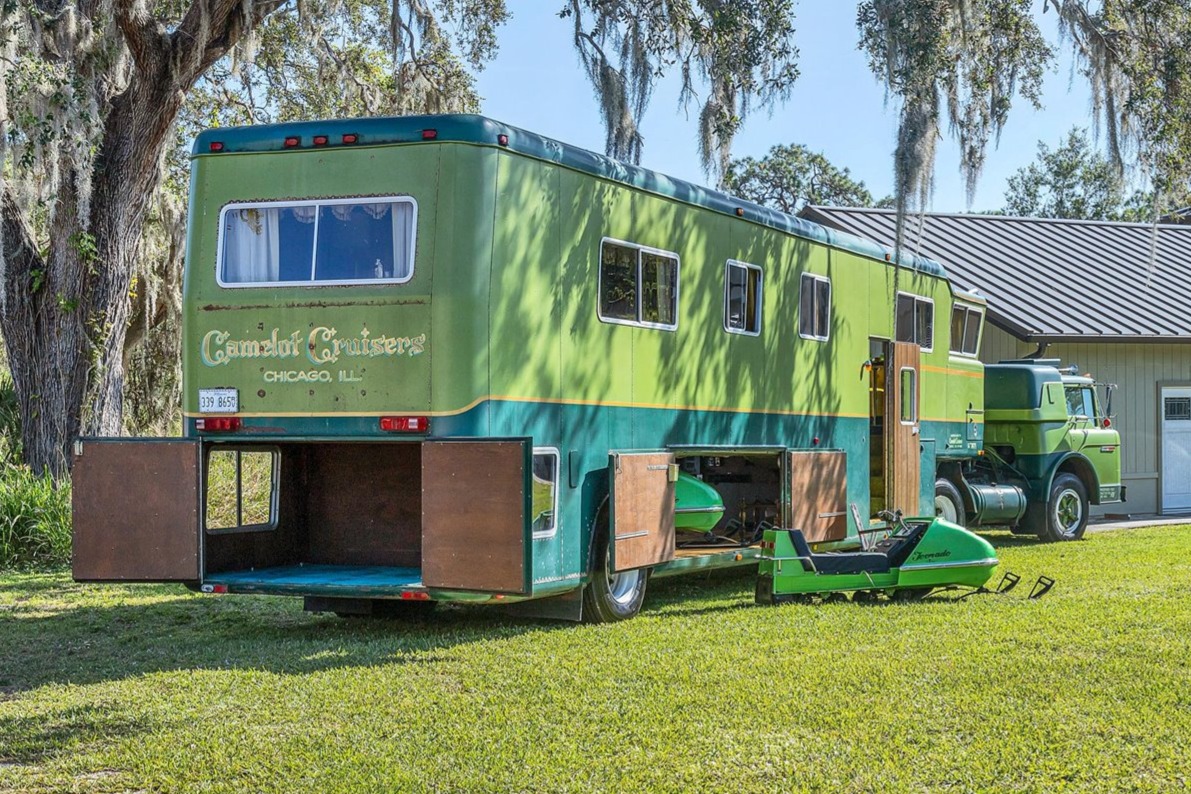 As RV Travel writes, back in the early 1970s, Richard “Dick” Edler, then president of Edler & Company, began planning out a way to travel with his family. Edler sought out an RV that could not only sustain his family through their travels but bring along the family’s four Saint Bernards for the trip as well. It’s unclear what motivated him to build his own RVs, but at some point, Edler decided he needed an opulent RV with comfort, loads of style, and even some cargo-hauling capabilities. This RV would be built by subsidiary Camelot Cruisers in Skokie, Illinois and tailored to meet the family’s needs.

The first Camelot Cruiser built was this 1970 model.

Up front is a Ford C-900 heavy-duty truck powered by a 391 FT big block V8. That’s cool enough, but the Gerstenlager trailer is where the magic really happens. All three Camelot Cruisers feature similar floorplans, but with different colors, and each is designed to haul something different. The very first Camelot Cruiser has a basement under the living space that served as a kennel for the aforementioned Saint Bernards. The second Camelot Cruiser features a basement that houses a boat, and the final model’s basement houses two matching snowmobiles. Reportedly, one of them could also haul horses, but it’s not said which Camelot Cruiser had that feature.

If you want to check out more of the first two Camelot Cruisers, Richard Rawlings of Gas Monkey Garage found them for sale at Auto Parts City, a vehicle recycler here in Illinois. He paid $30,000 for the pair, then later put the first one up for sale.

Amazingly, all three Camelot Cruisers have survived to the modern day intact, and they remain pretty much as they were produced in the 1970s. That makes them a wonderful window into what Edler thought the pinnacle of RV luxury was like back in the 1970s. The third Camelot Cruiser, a 1974, has shown up for sale a number of times. A private owner intended to modernize this Camelot Cruiser but sold it instead.

It also showed up at Worldwide Auctioneers. And now it’s for sale again at Bring a Trailer. 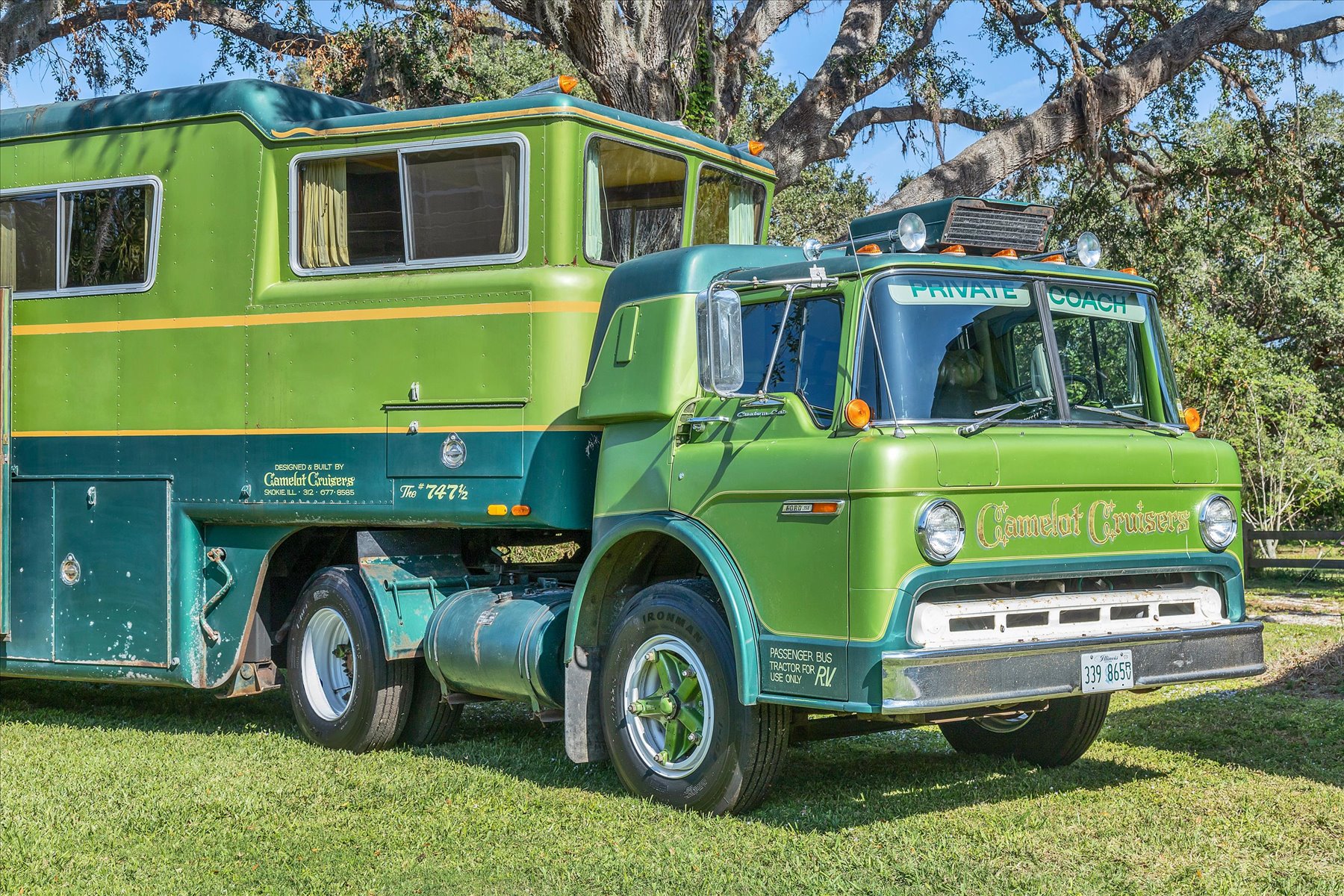 This one appears to have the most pictures taken of it, and it’s a ride just to flip through them. Open the door, climb up the stairs, and the first thing you’ll see is the “Royal Observatory Lounge.” All three Camelot Cruisers have this, and you get to sit in a U-shaped dinette with yellow tufted upholstery.

This front area overlooks the open road, the cab of the semi, and the campground that you’re staying at. And yes, there is an intercom system connecting the passengers in the trailer to the driver in the cab! 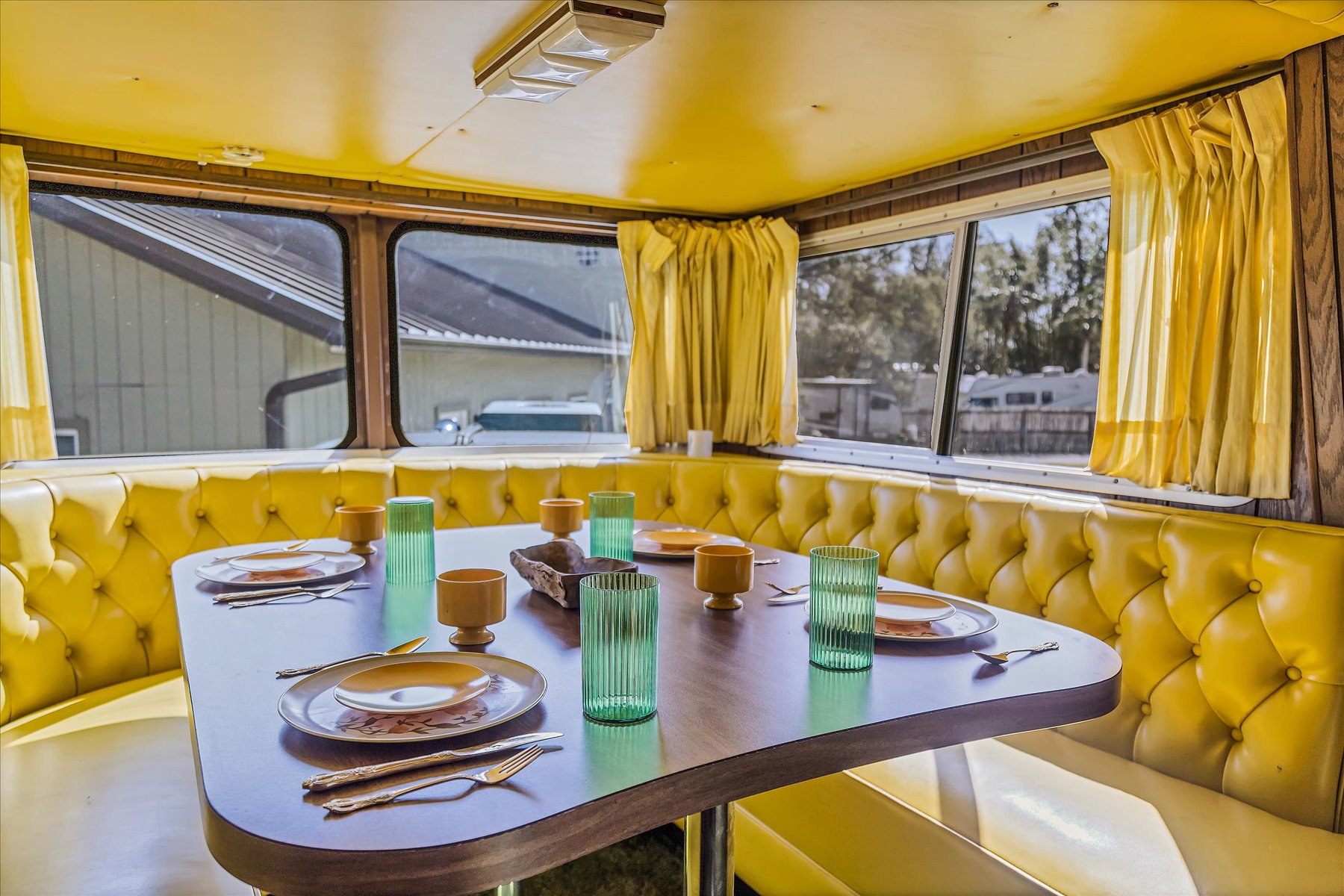 Moving back, the next area is the “Gourmet Galley,” which is a fully-featured kitchen with tile and oak cabinets. It has a dual-basin ceramic sink, stove, and refrigerator. But more than that, the Camelot Cruisers came stocked with gold-plated tools, pots, pans, utensils, and dishes. 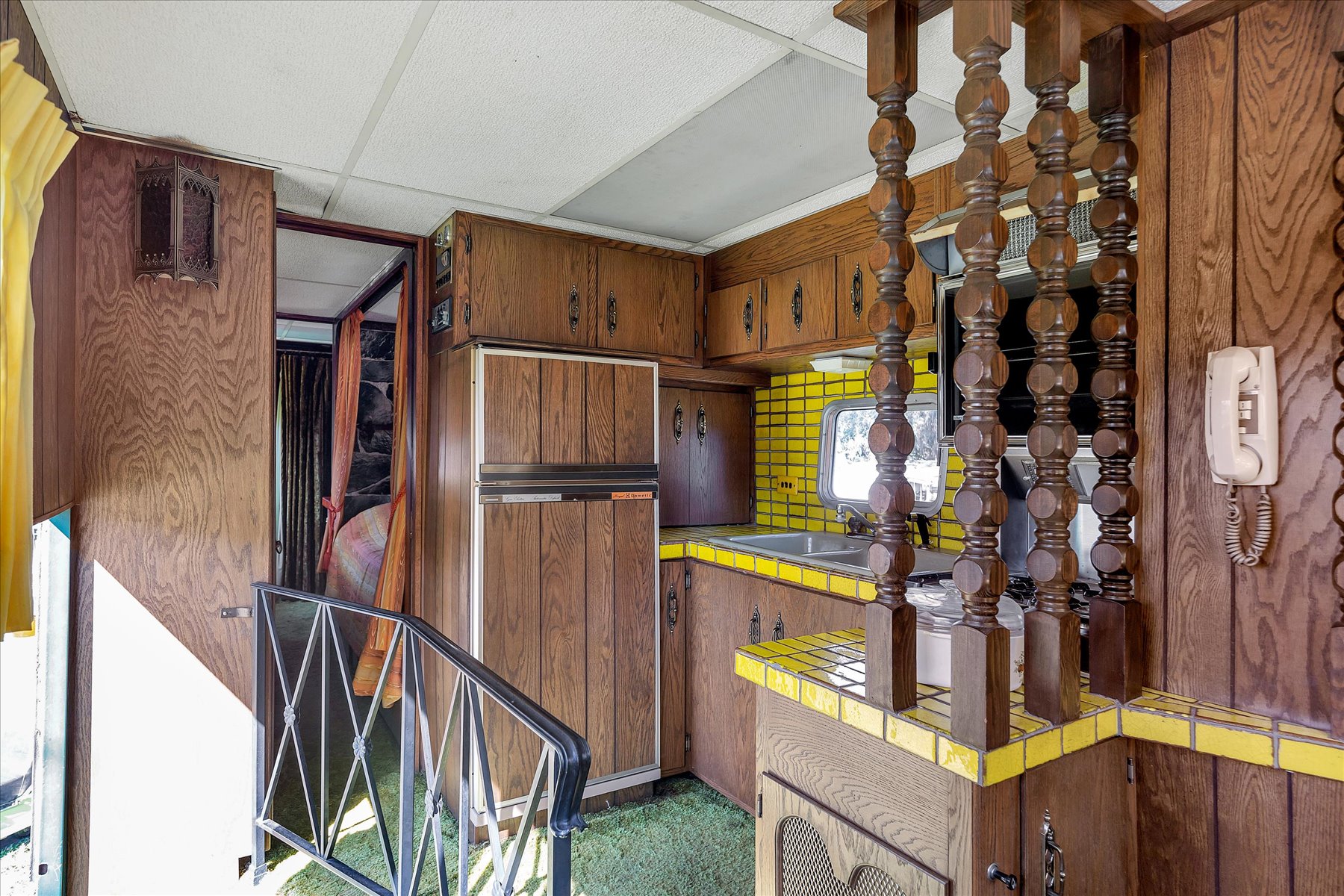 The Worldwide Auctioneers listing notes that at one point, Edler apparently said “I can’t imagine something worse than selling a $150,000 RV to someone and having their first night be ruined because they don’t have a can opener.” The listing goes on to say that a Camelot Cruiser came with four porterhouse steaks for the first night on the road.

Handling bathroom duties is the “King’s and Queen’s Privy,” which features two ebony china sinks, gold faucets, luxury tile, a full-size shower with a velvet curtain, and a toilet. 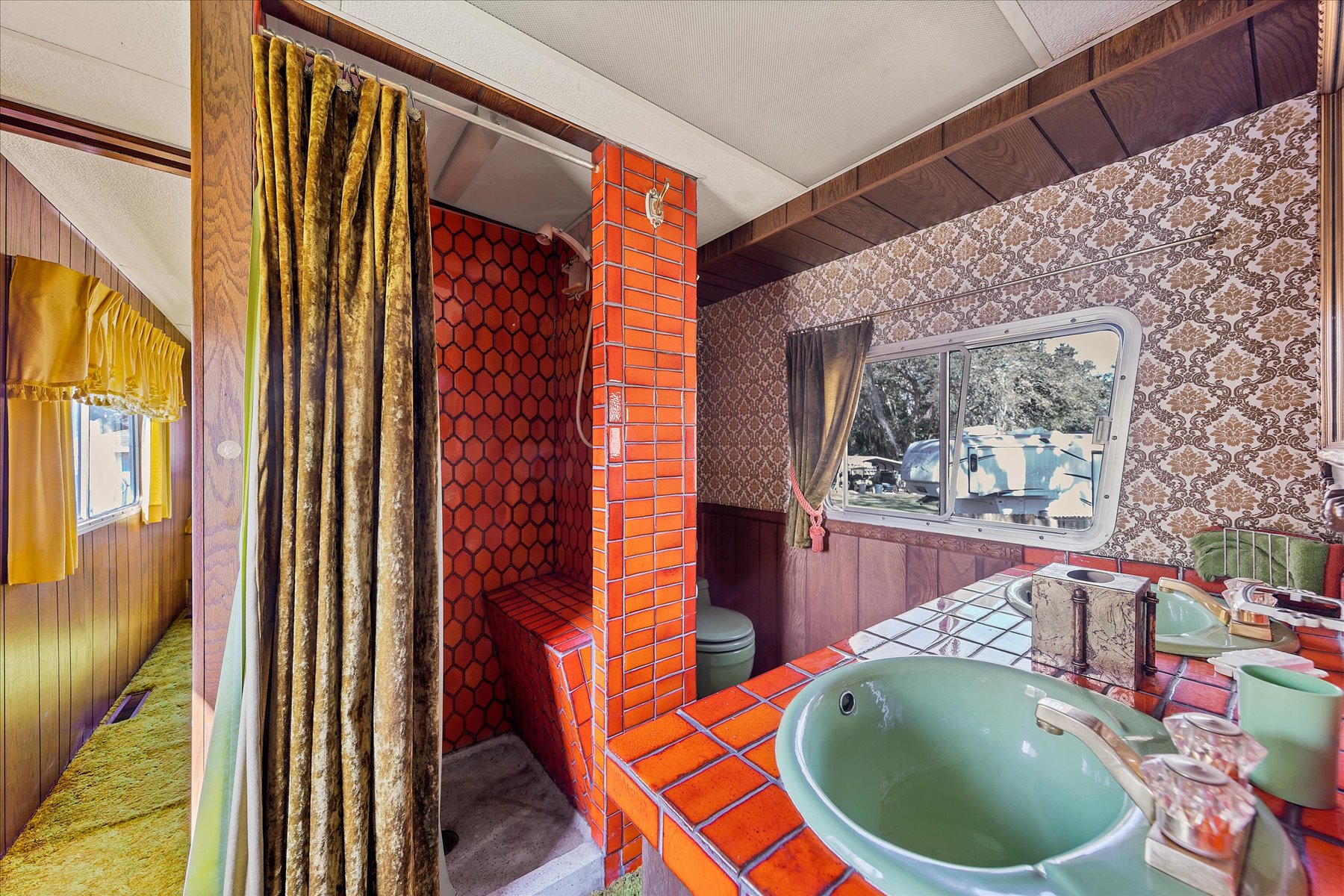 And when it’s time to go to sleep, you get to lay down in a double bed with a fur headboard and faux masonry wall.

It’s clear that despite this rig’s long 55-foot length, it wasn’t really meant for a bunch of people. Instead, it’s for a few people to travel in as much wood-paneled, thick carpeted luxury as they could handle. 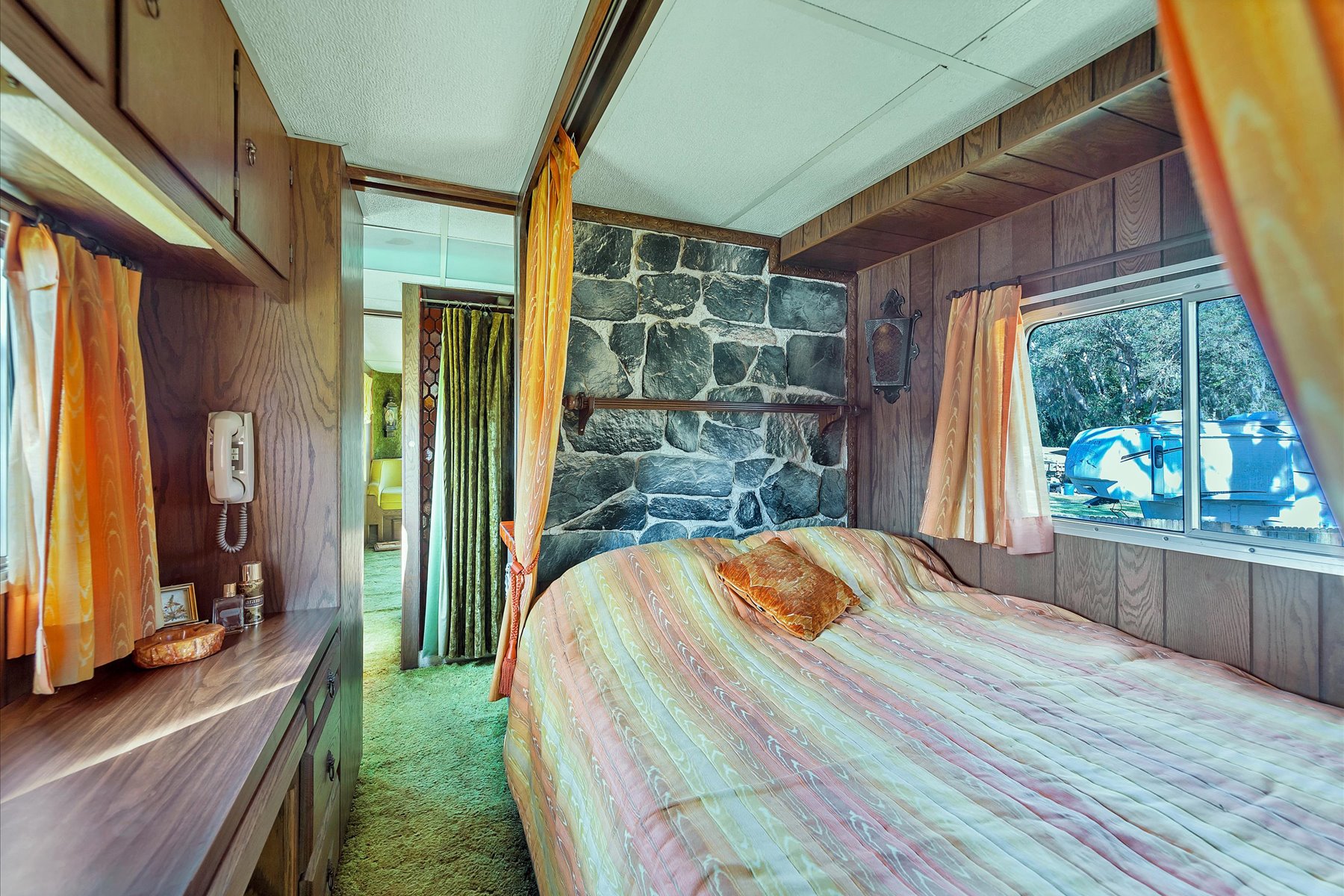 I’m still not done with the camper’s features yet, either. When you’re relaxing, you can kick back in the “The Great Hall” housed in the rear of the RVs. This is just a sitting room featuring more wood paneling, two seats, a coffee table, and a side cabinet.

Looking at the specs in the brochure, Edler really meant for these to be self-sufficient. Camelot Cruisers had a generator, a 300-gallon stainless steel water tank, a 300-gallon wastewater tank, a forced-air furnace, and air-conditioning. And when you weren’t using the generator, power was fed from three house batteries. 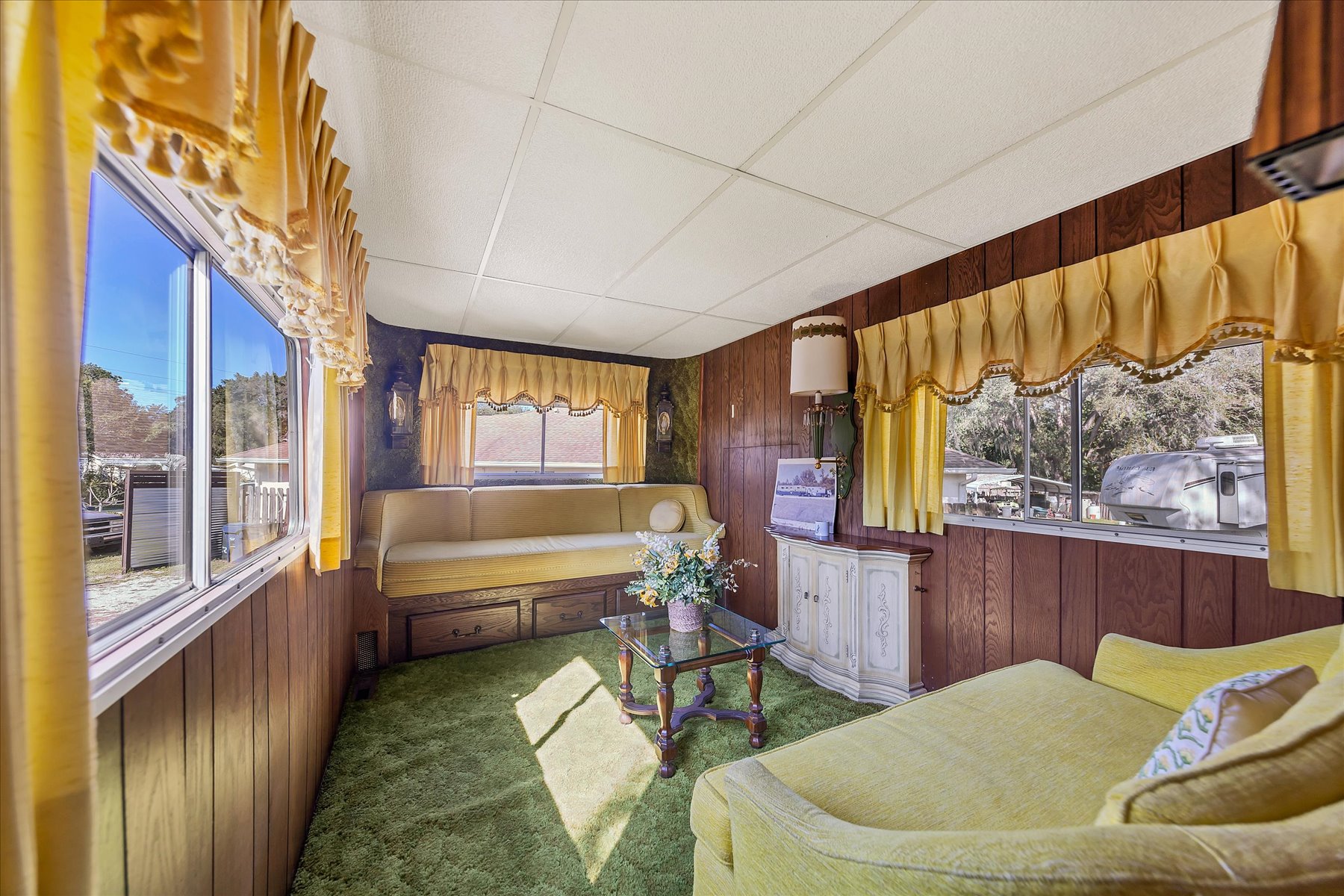 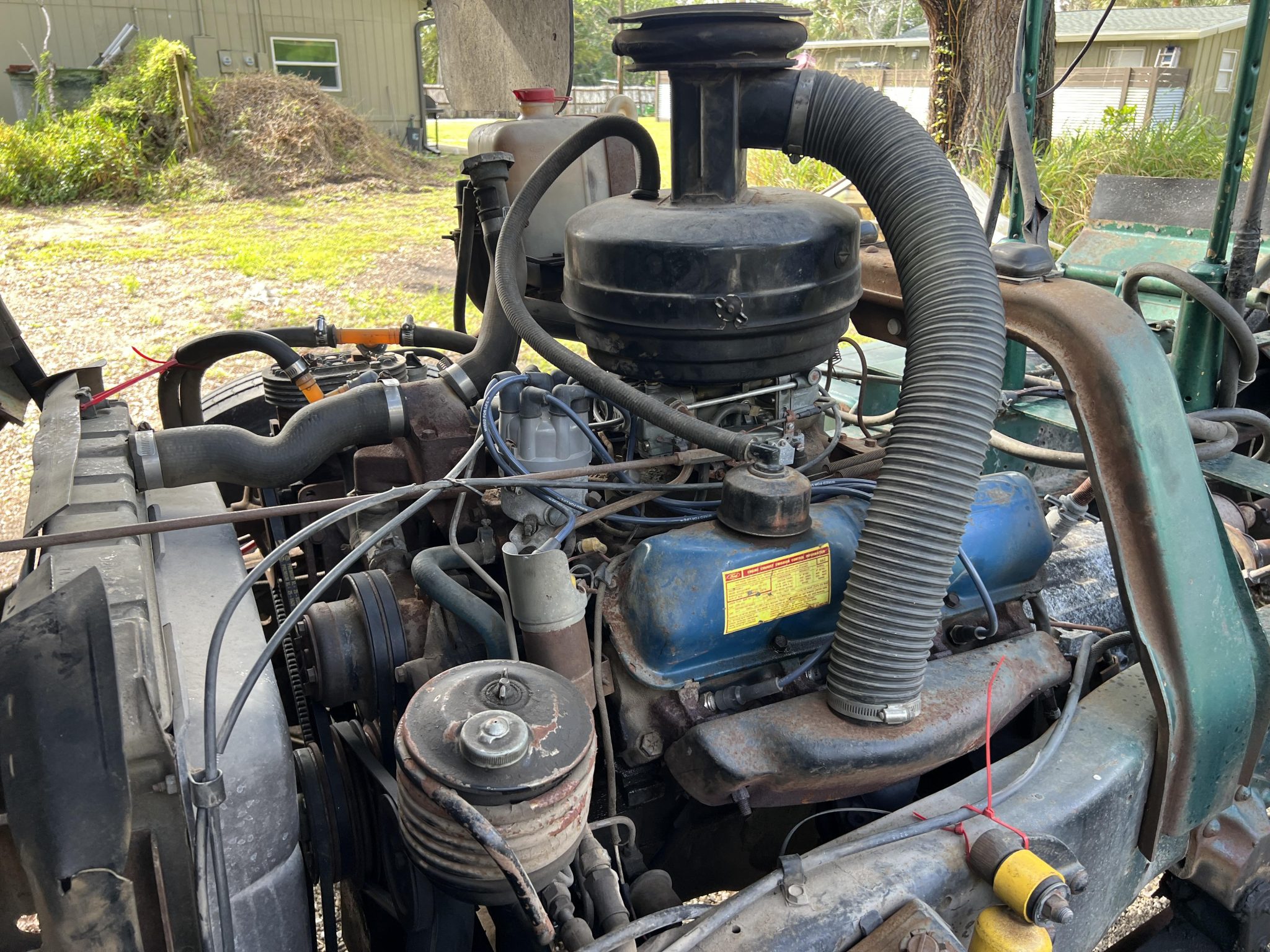 The tractor up front of this Camelot Cruiser is a 1974 Ford C-750. This is powered by a 391 FT big block V8, driving the rear wheels through an Allison AT 540 automatic, and the whole rig is said to have just 32,000 miles on it. Horsepower ratings aren’t stated, but the seller says that it’ll top out at 75 mph and cruise at 65 mph. That big block is also a thirsty unit, as the seller states that it gets just 5 mpg. At least it drinks from two 75-gallon fuel tanks, so you can get some decent distance between fuel stops. The cab of the semi also features a bed, so your driver has a place to sleep, too.

If you’re wondering, this whole beast weighs in at 44,000 pounds and has air brakes. Even with an RV registration, residents of some states will need to have a CDL or a license of the proper weight class to drive a rig like this.

As I said before, each Camelot Cruiser was built to haul specific things in their basements. This one houses two 1970s Poloron snowmobiles painted to match the finish of the RV. The basement cargo compartment is rather sizable and runs much of the length of the trailer.

While Bring a Trailer doesn’t say, the previous Worldwide Auctioneers listing states that this RV is very original inside and out. It certainly looks the part, as there are places where the paint is peeling, revealing rust.

Some commenters on the listing talk about renovating the thing, but I’d leave it as the time capsule that it is. Ok, maybe I’d repower the Ford with a Navistar T444E/7.3-liter Power Stroke. These RVs cost the equivalent of $958,297 back in 1974, but today it’s bidding at $70,000 with six days to go on Bring a Trailer. The Camelot Cruiser is another RV that I’d love to know more about. Edler appeared to have advertised them, but why did just three of them get made? If you know anything more about these, email me at mercedes@theautopian.com.

Mercedes is a lifelong fan of all things powered by an engine. When she isn't driving one of her five Smart Fortwos or her 14 other vehicles she could be found in the cockpit of a Cessna 172 or perhaps swimming in any body of water that she could find. She also has a deep love for buses of all kinds. Please send her buses. mercedes@theautopian.com Instagram: @mistymotors Twitter: @Miss_Mercedes30 Facebook.com/neonspinnazz
Read All My Posts »
PrevPreviousTesla Is No Longer One Of America’s 10 Biggest Companies
NextThis Subaru Is What Everyone In Brooklyn Will Drive When Society Finally CollapsesNext