Is This Odd Trunk Design Better Than A Hatchback?

I think for many of us out there, the humble and practical hatchback or liftback or whatever you want to call it represents the acme of automotive loading practicality. And, generally, I think this is true! But that doesn’t mean I’m not curious about other ways and ideas. I happened to see a picture as I was researching another story that got me thinking: could this be, somehow, an even better solution than the venerable hatchback in terms of usability and flexibility? Also, I’m not even sure this method I’m going to show you was entirely intentional, either, which makes it more interesting. The car is the stillborn Polski-Fiat 126p NP, so let’s get to it.

The Polski-Fiat 126p NP was an experimental project that sought to modernize the Polish people’s car, the humble Fiat 126p, also known as the Maluch (that’s “toddler” in Polish) from a rear-engine design to a more modern transverse front engine/FWD design. The 126p (a license-built version of the original Fiat 126) always had a design that looked like it would be a hatchback, but wasn’t. Well, not at first. All 126ps had a front trunk and most had a rear engine lid that opened like this: 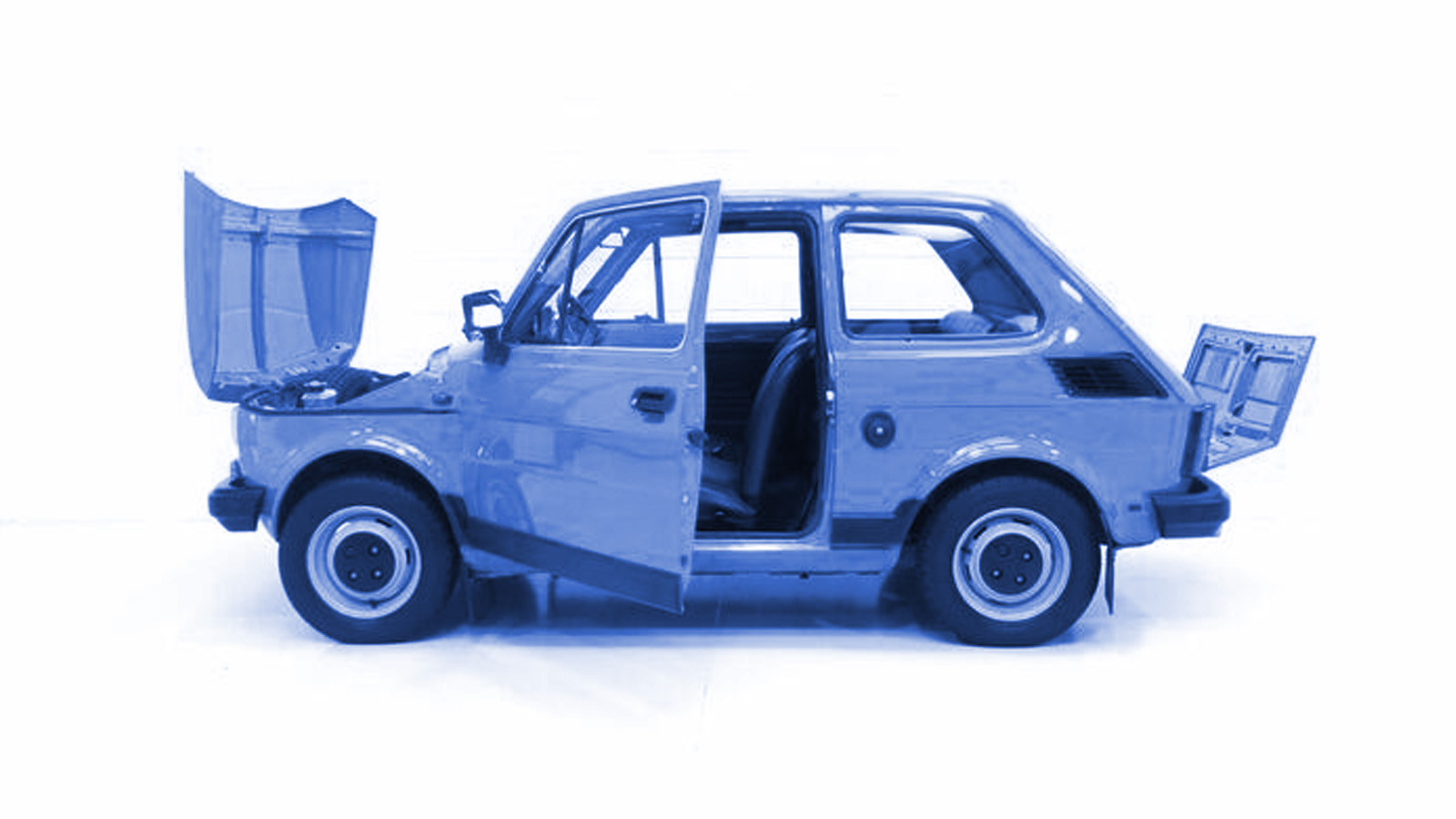 Now, not all 126s had that; an updated version called the “126 Bis” had the little inline-twin engine laid flat and a lower luggage floor and hatchback design was used: 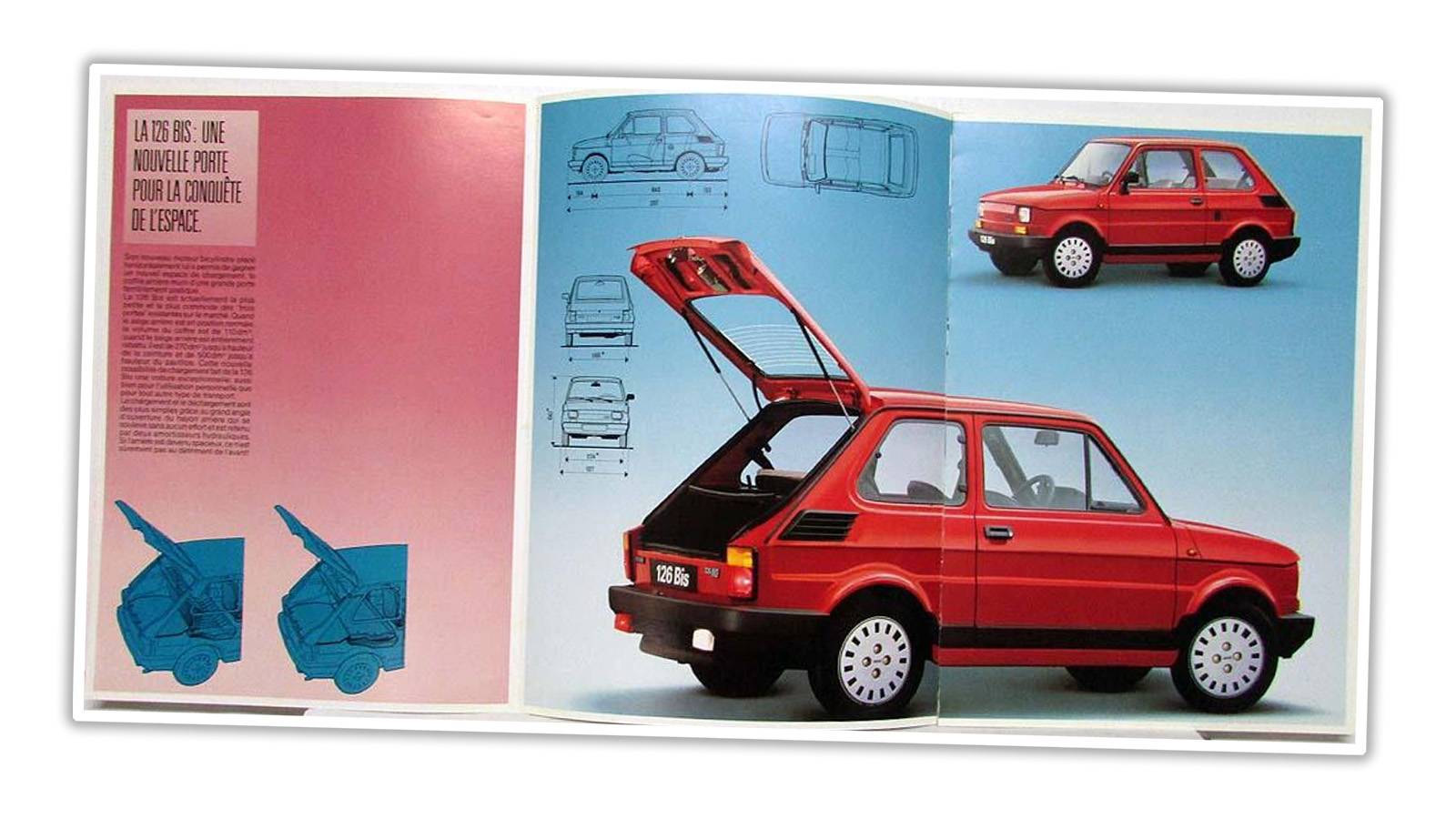 It was a real packaging triumph! Impressive work, Polski-Fiat!

Anyway, even this refinement seems to have not been enough, which is why the company started work in May of 1977 on the NP version, with NP referring to the Polish words napęd na przednie koła, which means “front wheel drive.” They had to stretch the front end to fit the little engine, even turned sideways, and gave it MacPherson struts and rack-and-pinion steering and all that goodness, and I think managed a pretty decent-seeming radical drivetrain flip of the little car. 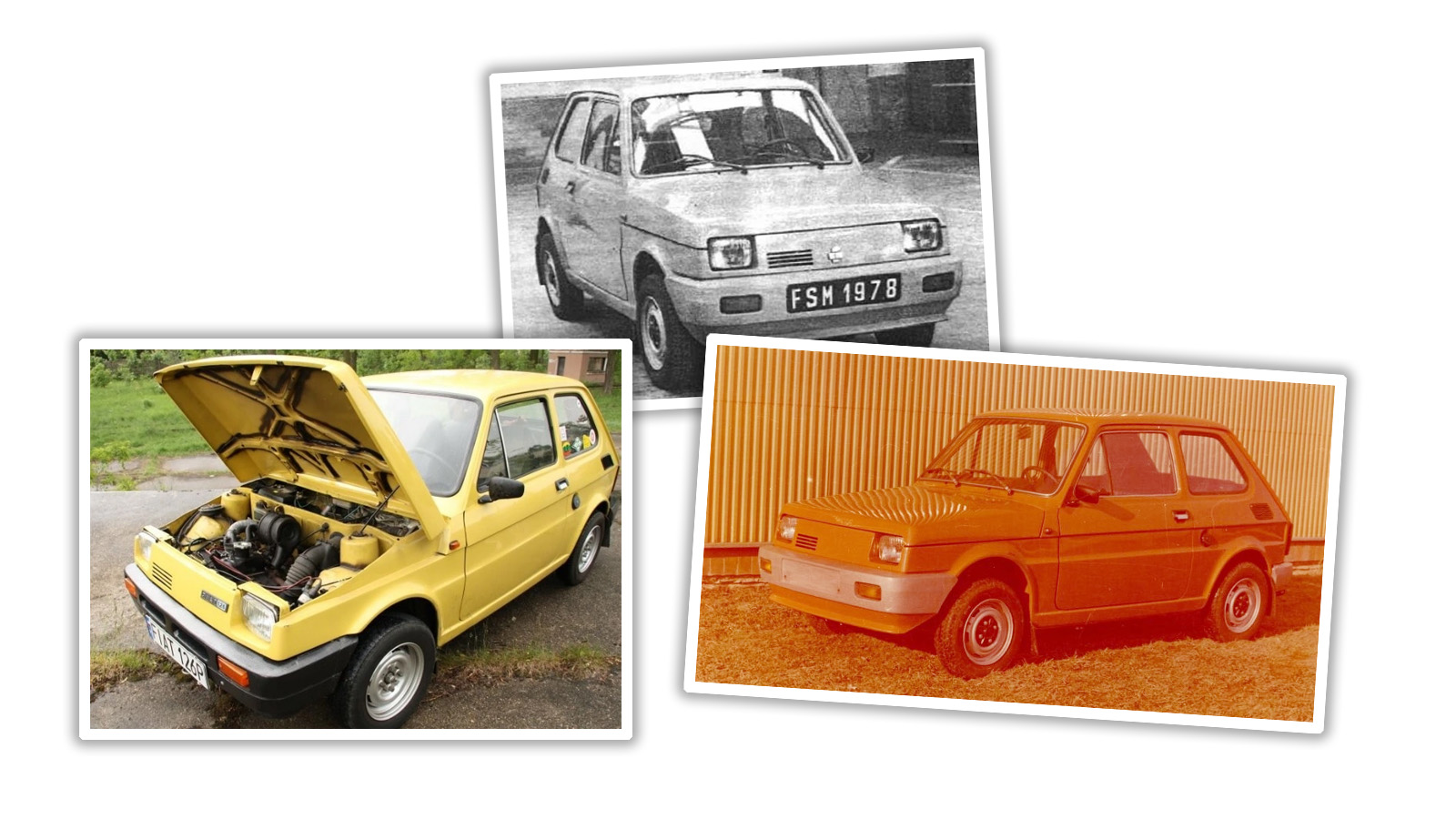 There seems to have been a few prototypes built, as you can see above, and while they look pretty similar, around rear there seems to be at least two different types. One has a full hatch, like the Bis and so many other cars of this era, and I suspect this is likely what the company’s desired end goal was: 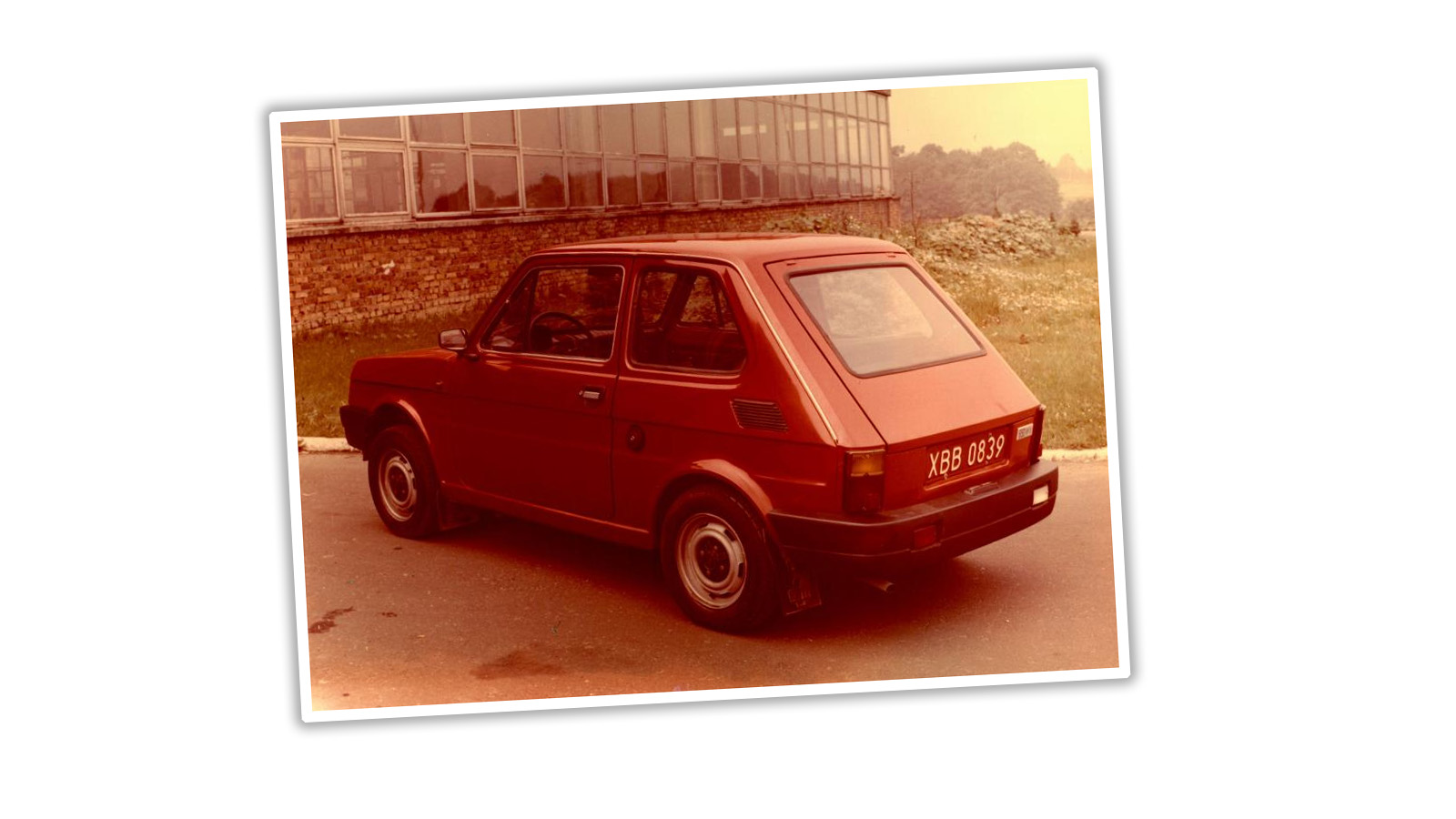 But there’s also a version that has this strange, bottom-hinged trunk lid that opens down and back: 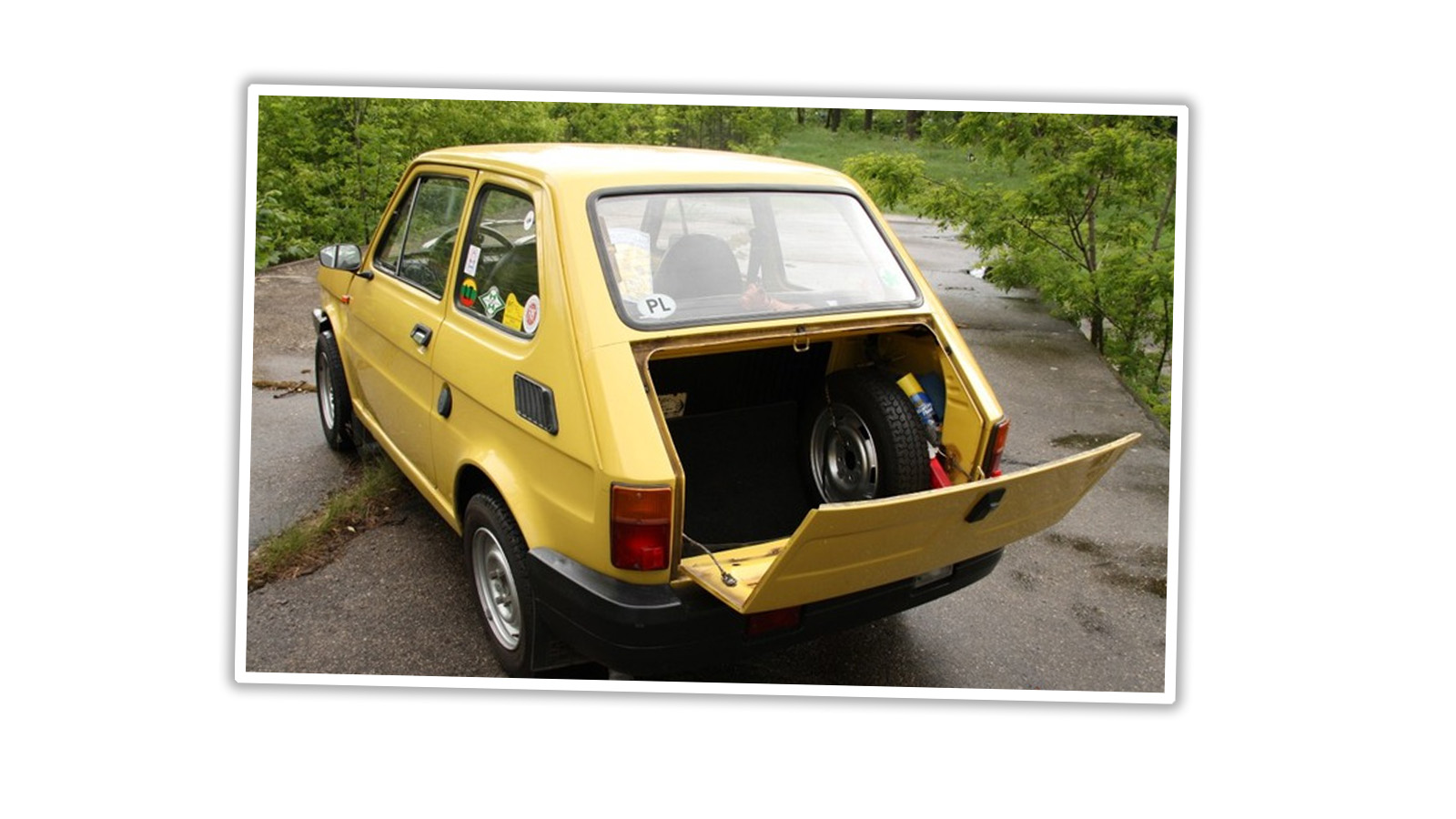 It may seem an unusual choice until you realize that that is simply the way the rear-engined Fiat 126p’s engine lid opened: 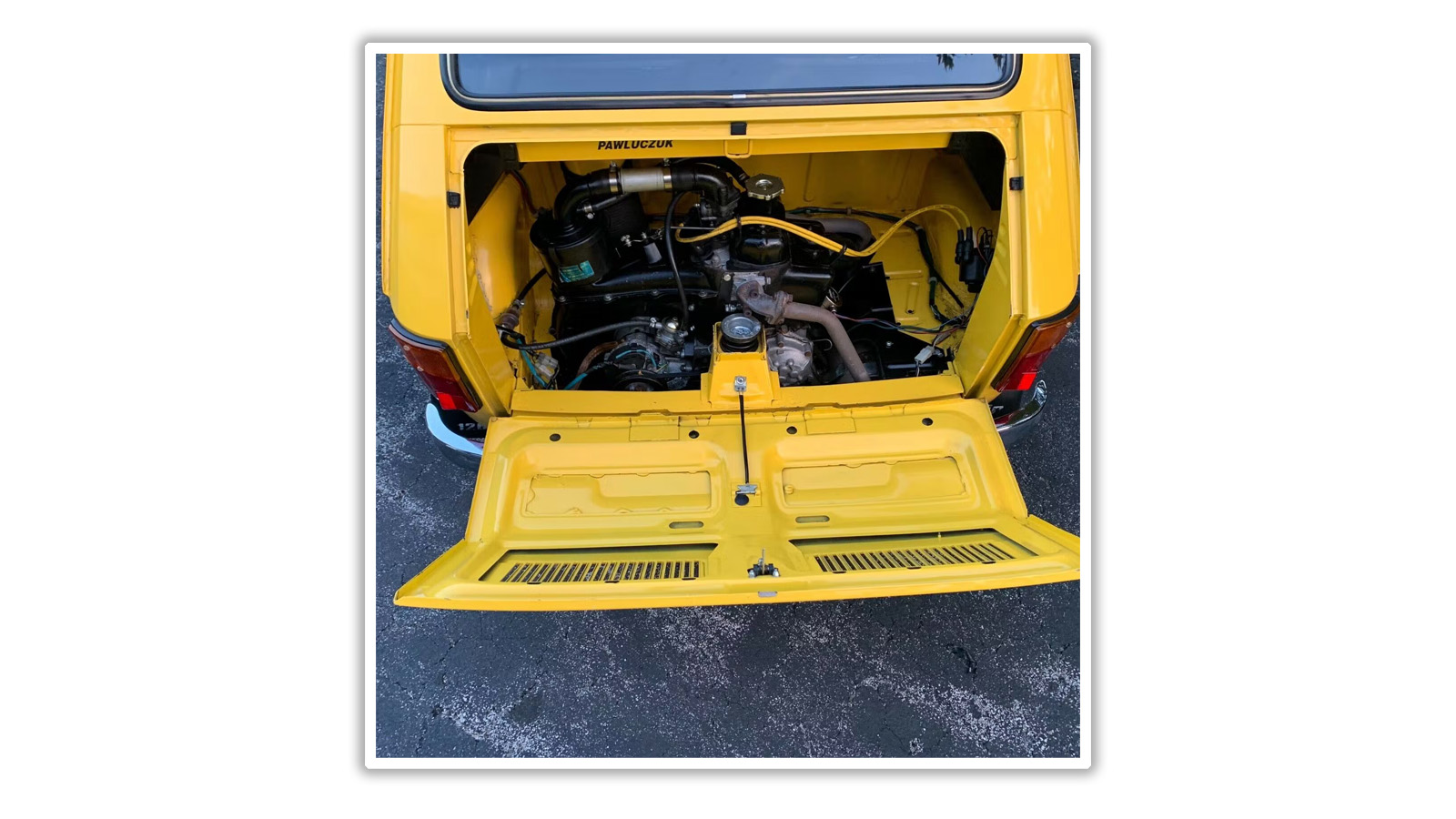 So, my guess is this prototype just didn’t bother changing it, figuring eventually they’ll build ones with a proper hatch. But, this got me thinking – what if this type of trunk lid is better?

I know it looks awkward, but hear me out: a trunk lid like this could serve to become a large-object loading platform easily. This idea isn’t new – the Mini was doing it since 1959 – but unlike the Mini the angled shape of this trunk lid offers a lot more ability to keep cargo secure. 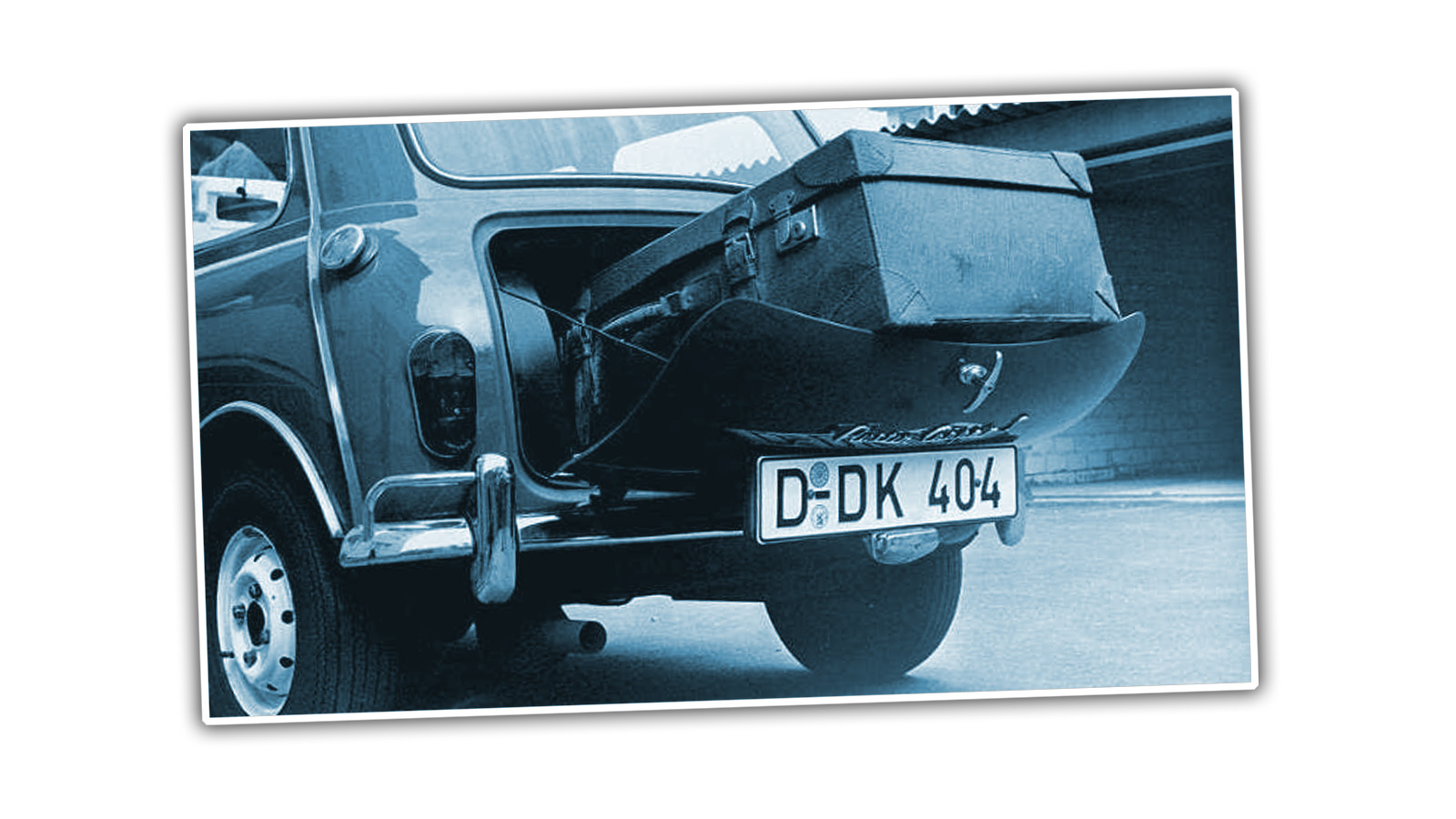 I’ve toyed with the idea of a flip-down, long tailgate before, but even then I was just thinking flat flip-down lids; an angled lid like this offers a lot more, I think.

Imagine if you had something like this, with roll-out top and side covers for the rear lid, making it at least somewhat weatherproofed and enclosed: 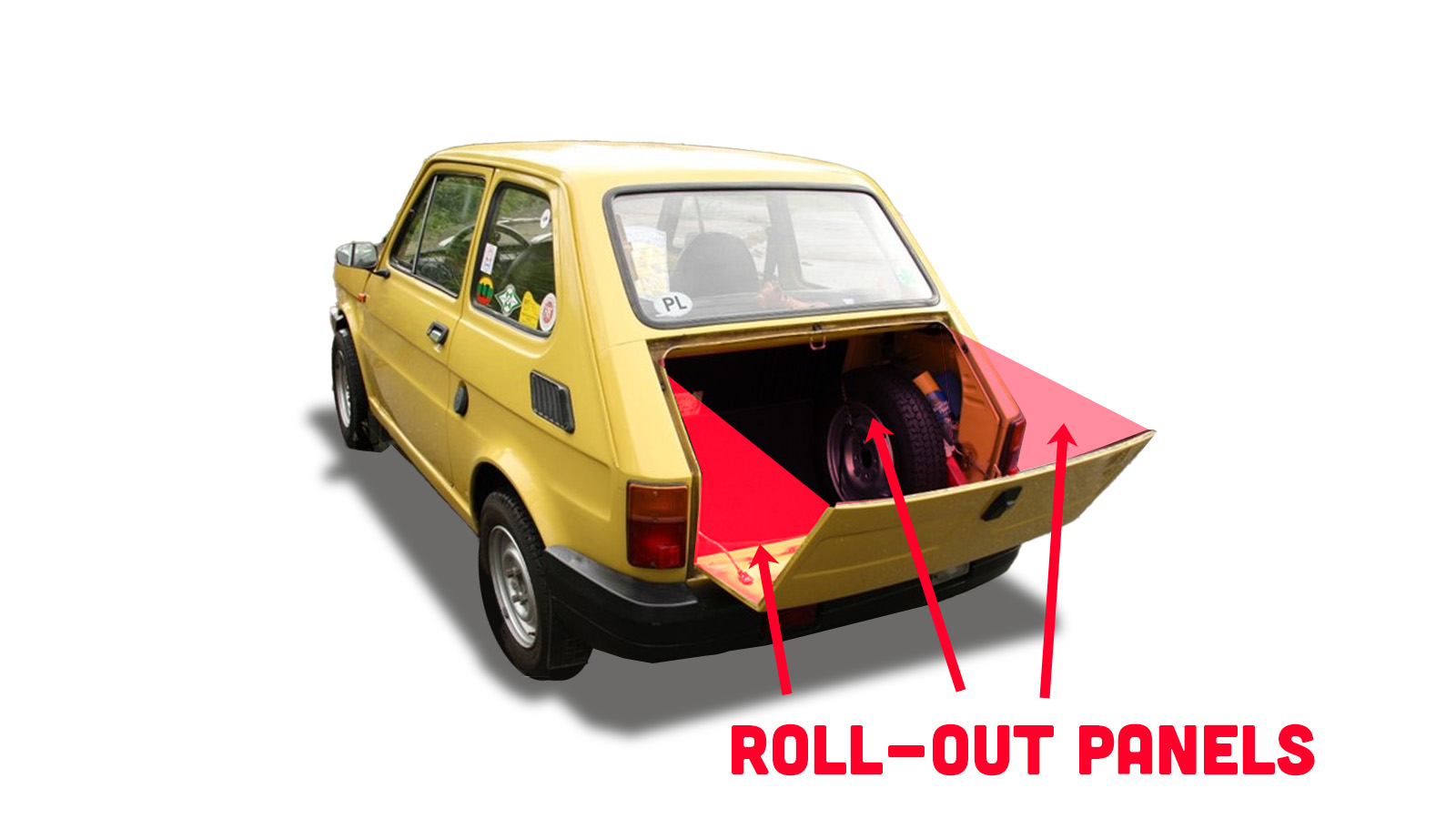 I think something like this [Editor’s Note: Looks like a deployable truck bed! -DT] could help with one of the biggest drawbacks of the hatchback design: that it’s contiguous with the interior of the car. Sure, you can have fold-down back seats in either design, and you should! You want to be able to carry long stuff in both, after all.

But the flip-down, angled-lid design could carry an awful lot of things that are messy and it wouldn’t make the inside of your car a mess, something I feel like I’ve had to deal with in hatchbacks forever. Sometimes you want a real separation of your cargo and passenger spaces, and a solution like this, that can readily handle oversized loads without leaving the whole back of your car open to the elements and grime, seems like a good idea.

Plus, lots of hatchbacks have real exhaust impingement issues, and technically many carmakers don’t recommend driving with the hatch open, so even if you can fit that lawnmower in there with the door open, you may not want to drive very far like that. Plus, there’s the issue of securing the open hatch, so it doesn’t smack on whatever you’re carrying and damage the hatch or the stuff.

Let’s pro and con this design with a normal hatch:

Cons: Interior gets messy depending on what you’re hauling, exhaust issues when driving with hatch open, securing hatch can be a pain, opening in parking decks with low ceilings can be an issue, leaving open for large items exposes passenger area to elements

Cons: Could be awkward to open/load from directly behind, lack of opening window could restrict carrying some items, possibility to overload and damage trunk lid

Hm. I think there’s arguments to be made for either side. Which is exactly what I encourage everyone to do in the comments here: argue! Am I an idiot for liking this? Should I have taken a hint from Polski Fiat, who never went through with this? Let me know!

I'm a co-founder of the Autopian, the site you're on RIGHT NOW! I'm here to talk to you about taillights until you cry and beg me to stop, which I absolutely will not. Sorry. Hug? Also, David's friend.
Read All My Posts »
PrevPreviousWe’re Driving A 1966 Ford Mustang And A New Jeep Wagoneer (Towing A Golden Eagle) From Detroit To LA Next Week. Come Hang Out!
NextFerrari Enzos, Ford GTs, And FJ Cruisers: The 2003 Detroit Auto Show Was A Car Nerd’s DreamNext