During the pandemic, many Americans left their homes behind and embarked on cross-country adventures. Many of these people continued to work during this, using their campers as mobile offices. Mitsubishi Fuso has been paying attention to this and with a lot of help from Tokyo-based Dream Drive Campervans, unveiled the Fuso NOMADPro Canter concept that blends work life and #vanlife into a single cabover truck with a gullwing hatch.

I’ve been writing about all sorts of RVs for over two years. In that time, I’ve covered everything from amphibious milk tankers to double-decker coaches turned into family homes. Hell, I even found a rare fiberglass camper and dragged it home! But I haven’t talked much about how people fund these adventures. Remote work made it possible for many vanlifers and RVers to do office work from anywhere they could find an internet connection. It’s not surprising to read that the RV industry sold a record number of RVs in 2021. This year, the industry expected to set another record, but instead, the market is slowing back down. The RV Industry Association is expecting RV shipments in 2023 to get down to pre-pandemic levels. 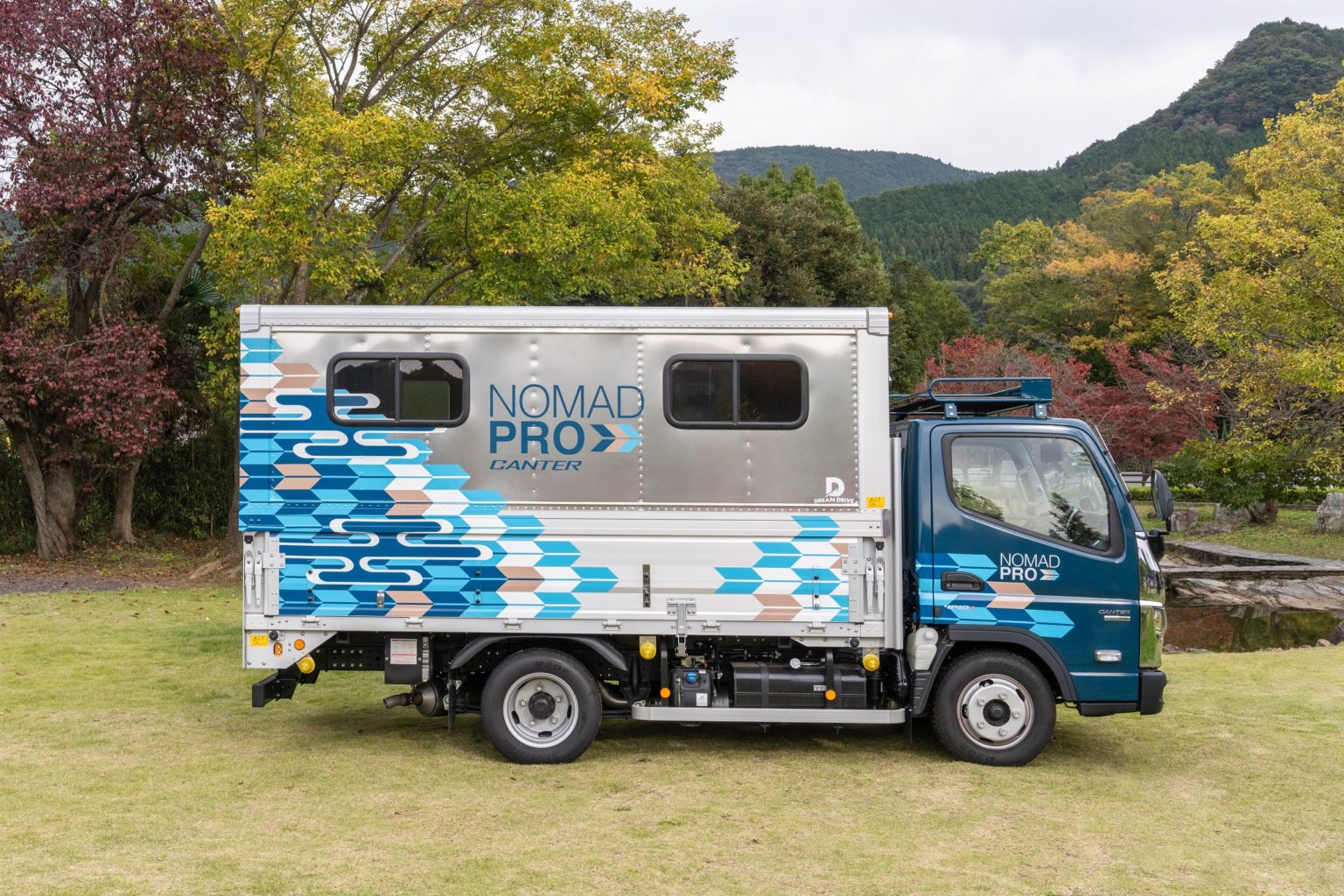 Despite this, manufacturers are still putting out new ideas. For example, Ford–which expects camper van sales to increase–is releasing the enticing Transit Trail van. Mitsubishi Fuso Truck and Bus Corporation is taking a unique route to the RV market, and it unveiled a concept for a cabover truck with a box on the back that features both an RV living space and a mobile office.

Looking back, a lot of the RVs that I’ve written about don’t seem to have much on deck for remote workers. Sure, you’ll often get a table or counter where you can just plop down a laptop, but you’re getting far from an ideal workspace. Here, I’ll give a couple of examples. Remember that wonderful 1985 Toyota Mirage that I wrote about? Good luck being productive here:

Or how about that million-dollar 27North Ascender 30A expedition camper? Well, that one gives you a dinette.

You could put your workstation down there and those cushions seem comfortable enough for work. But it’s probably not ideal if you like your workstations with dual monitors. And neither of these campers blends the outdoors with your mobile office. You’re surrounded by walls and maybe a small window, perhaps not too different than working in a real office.

Here’s where Tokyo-based Dream Drive Campervans and Mitsubishi Fuso come in with the Fuso NOMADPro Canter. Mitsubishi Fuso–originally of Mitsubishi Heavy Industries but is currently controlled by Daimler Truck AG–says its RV concept is supposed to make a hard work-life balance healthier:

The change in workplace culture, accelerated by the Covid-19 pandemic, is driving a redesign and flexibilization of work worldwide. Remote working and flexible working hours are becoming part of everyday life for more and more people. With the many benefits this change brings to individuals, mingling working time and personal life is also showing negative effects on both physical and mental health. As a result, many people are beginning to explore new ways to achieve a balance between work, leisure and personal well-being. The NOMADPro was developed to support people on this journey. It has been proven that spending time in nature has a positive effect on mental health, and regular outdoor exercise also promotes physical fitness. The FUSO NOMADPro enables working in direct contact with nature and opens up numerous new possibilities for contemporary, individual working models. 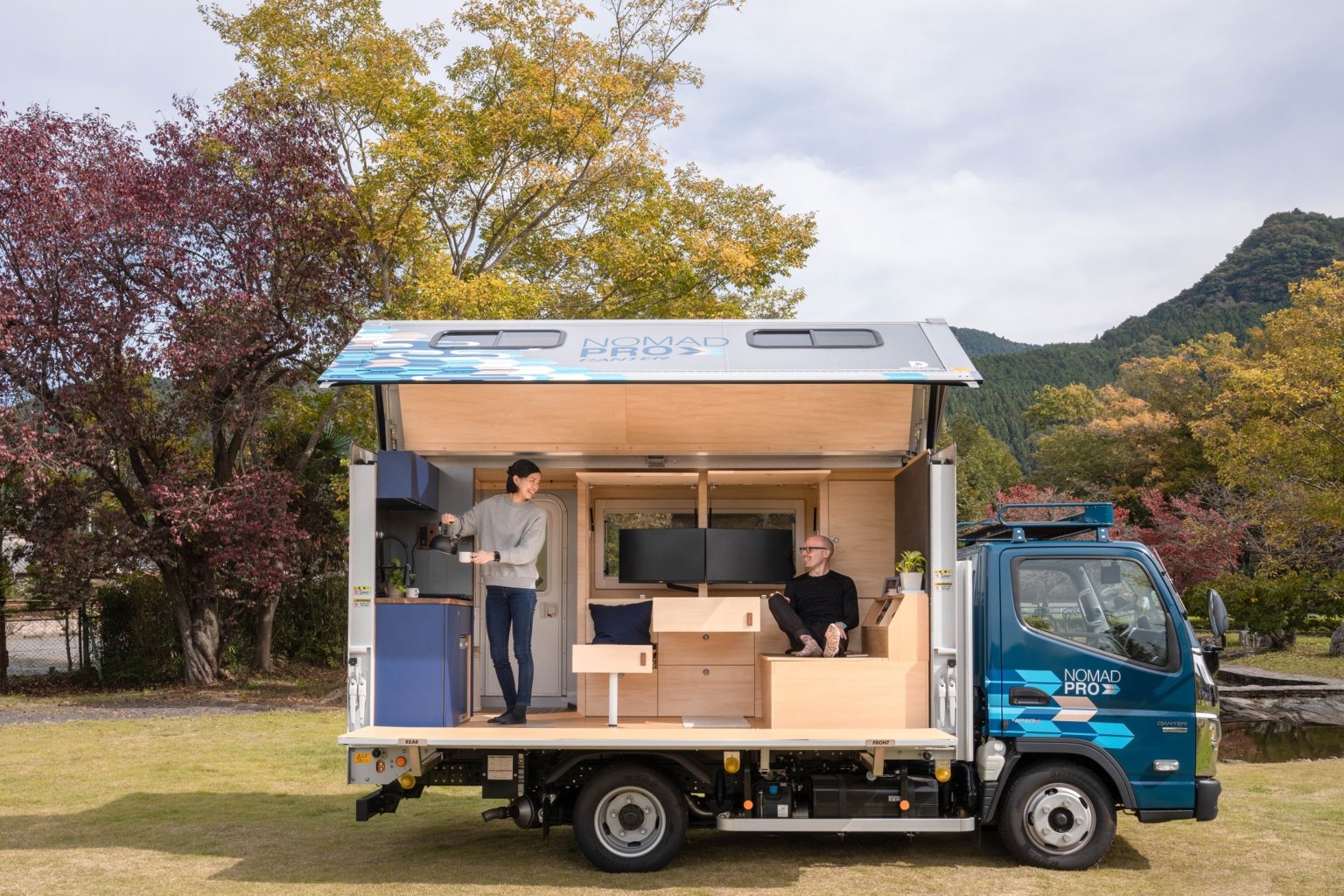 For this build–constructed by camper specialists Dream Drive for Mitsubishi Fuso–the Canter commercial cabover was chosen. First introduced in 1963, this light-duty commercial truck is a versatile platform for all sorts of different trucks. Canters can be found all over the world doing all kinds of work. But this Canter is built for a different kind of work, as the NomadPro features a camping unit with a trick feature: An entire wall plus a major portion of the roof opens up like a gullwing. This reveals an office featuring an office desk and a kitchenette. The truck manufacturer believes that by having the outdoors be an integral part of your work environment, you’ll hopefully be a happier, healthier person. While I can’t tell you if you’d be happier working outside, the few times that I’ve been able to write outside have felt pretty awesome.

And since it’s built around blending office work with camping, the concept also features dual monitors, so the people working don’t have to be glued to a laptop. 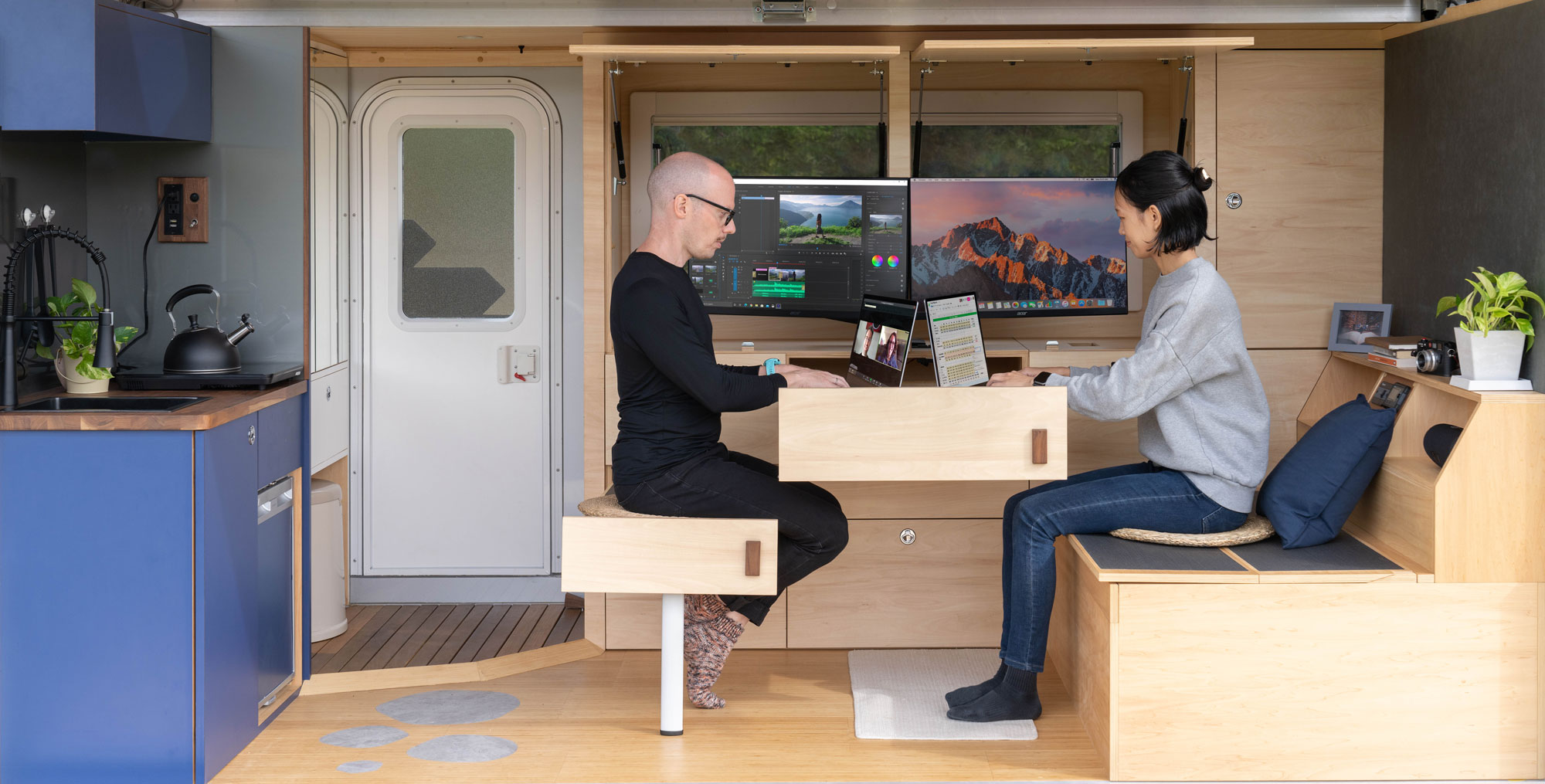 Mitsubishi Fuso says that there’s more than just a cool door and two monitors to this concept. Dream Drive crafted an interior that it says features Japanese design cues. There’s bamboo flooring, wood finishes, and tatami-style seating. The RV’s entrance has four stone tiles, which are supposed to make the vehicle’s owner feel like they’re entering a garden.

Mitsubishi Fuso continues that the Japanese design references continue with a cypress wood stool and a Japanese bathing bowl in the shower room. 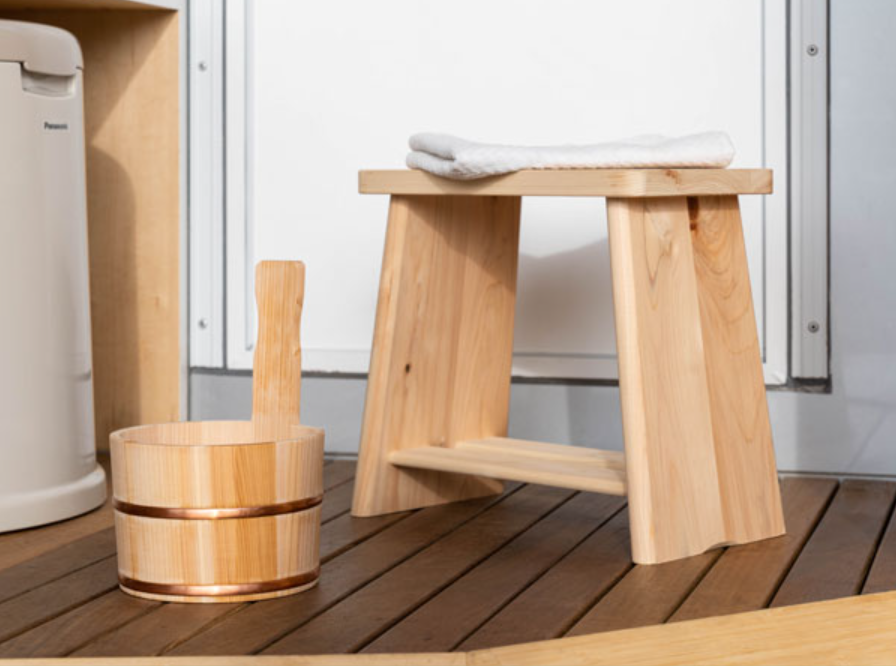 Additional equipment comes in the form of the typical kitchenette unit that you’d find in a normal RV as well as a piece of the body that extends out into deck space. When the workday is done, the desk workstation stows away, and in its place is a pull-out bed.

I love the idea of snuggling under some blankets under the stars in this thing. 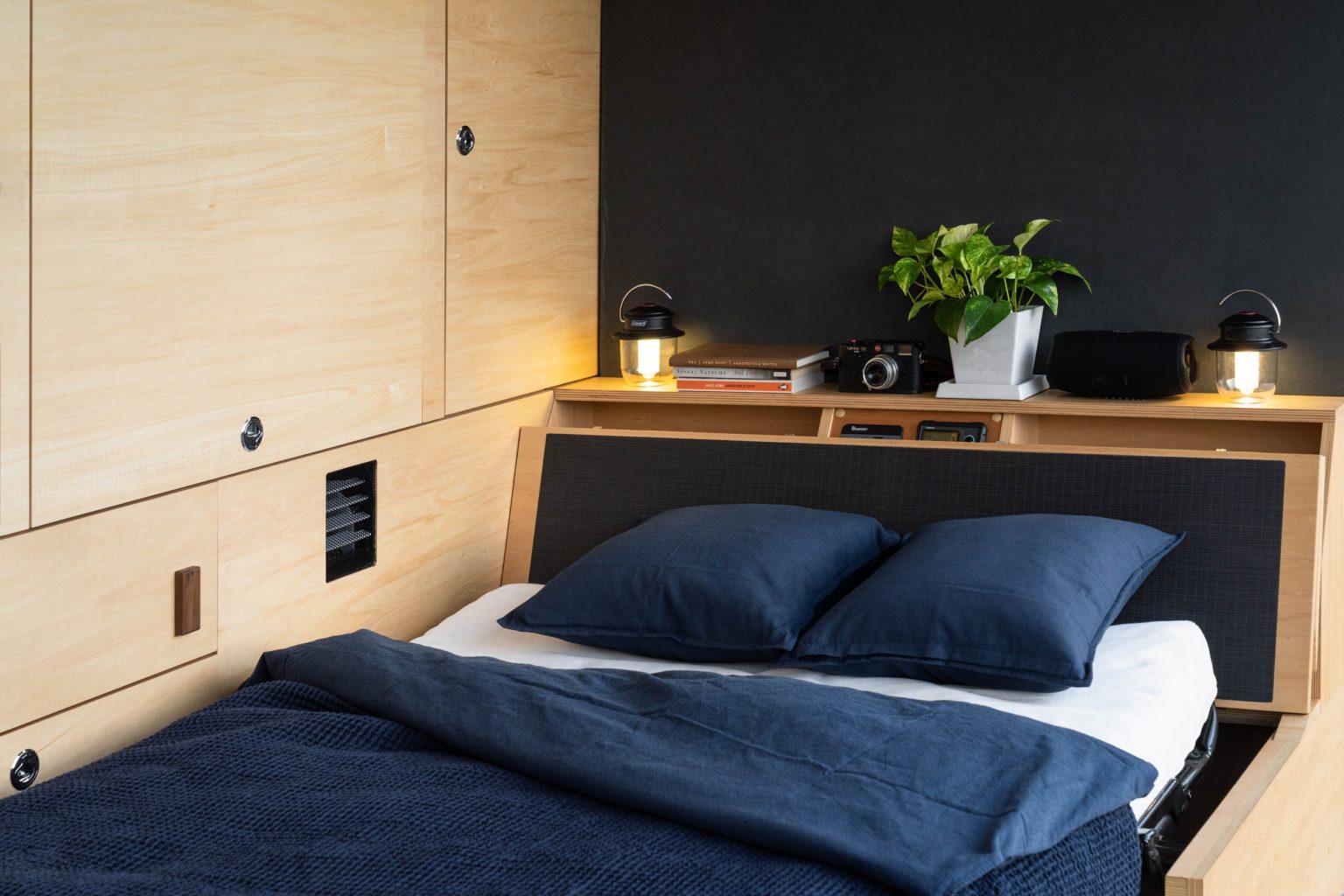 Sadly, I do have some bad news, and it’s that Mitsubishi Fuso does not plan on putting the NOMADPro Canter into production. Instead, this concept exists to show what is possible when you customize a Mitsubishi Fuso Canter truck, which you can get in America. It also exists as a promotion for a healthier work-life balance.

If the idea of having a camper built with remote working is in mind, Airstream will sell you its Flying Cloud 30FB Office. That travel trailer replaces what would normally be bedding with a small office. And luxury travel trailer startup Living Vehicle will also sell you a camper with an office. Those aren’t the only ones, either, as there’s a whole list of campers with built-in cubicles for your remote work life. But none of them go anywhere as far as Mitsubishi Fuso does in making your office also a part of the outdoors. 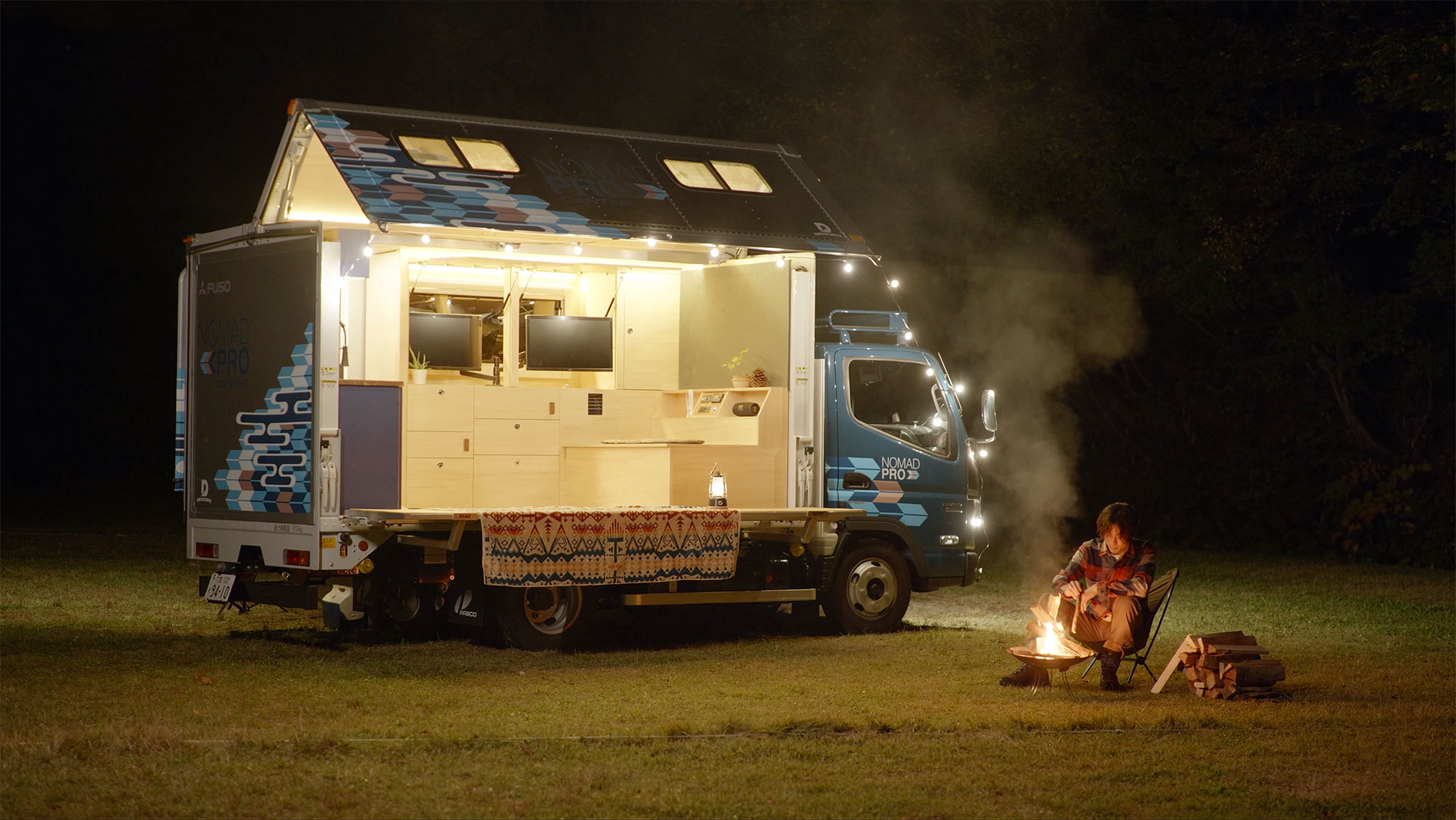 Maybe if Mitsubishi Fuso doesn’t go ahead and make this real, someone else will. I love when campers don’t try to keep you cooped up in a box, and instead open up to the outside world.

Know of an awesome or quirky RV out there that the world should know about? Drop me a line at mercedes@theautopian.com!

(Correction: An earlier version of this story implied that Mitsubishi Fuso built the camper when it was really the folks of Dream Drive. Unfortunately, that was how Mitsubishi Fuso’s release made it appear. Thank you wonderful readers and I regret the error.)

Mercedes is a lifelong fan of all things powered by an engine. When she isn't driving one of her five Smart Fortwos or her 14 other vehicles she could be found in the cockpit of a Cessna 172 or perhaps swimming in any body of water that she could find. She also has a deep love for buses of all kinds. Please send her buses. mercedes@theautopian.com Instagram: @mistymotors Twitter: @Miss_Mercedes30 Facebook.com/neonspinnazz
Read All My Posts »
PrevPreviousThrowing Common Sense Out The Window: 1980 Porsche 924 vs 1984 Mercedes-Benz 380SEC
NextThe Chevrolet Bolt EV Has Once Again Been Recalled Due To Fire Risk, But The Cause Is So Much Weirder Than A Battery ShortNext