Facebook-f Twitter Instagram Rss
Menu
Menu
Home » There Was A Time When You Could Get A Ford Minivan With Rear-Wheel-Drive And A Manual Transmission: Holy Grails

There Was A Time When You Could Get A Ford Minivan With Rear-Wheel-Drive And A Manual Transmission: Holy Grails 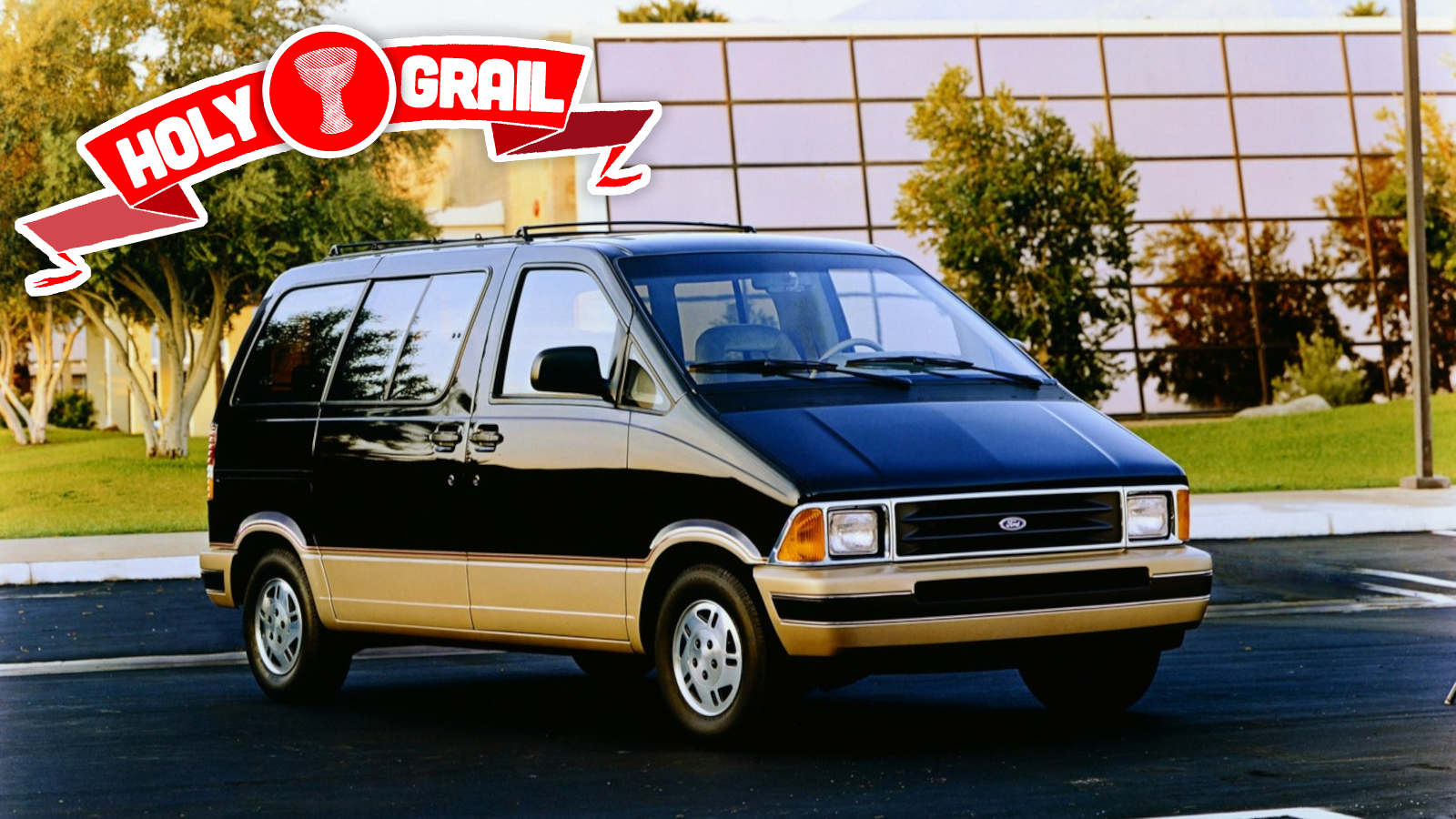 Welcome back to Holy Grails, the Autopian series where you show off some of the coolest, most underrated cars that you love. Since starting this series, we’ve received requests to write about truckloads of obscure, forgotten machines with something special about them. Some of these cars haven’t even been on this continent! Today, we have a Grail recommended by a Minnesotan named CJ, who showed David Tracy his incredible stickshift Aerostar last year. Well, now he’s purchased another. Here’s why it’s special.

Today we talk about Ford’s first minivan, the Aerostar — The Blue Oval’s answer to Chrysler’s powerhouse minivans. Ford didn’t copy Chrysler, instead it built a futuristic rear-wheel-drive van that could carry lots of people while towing a camper behind it. And if you look hard enough, you can find one of these with a manual transmission. 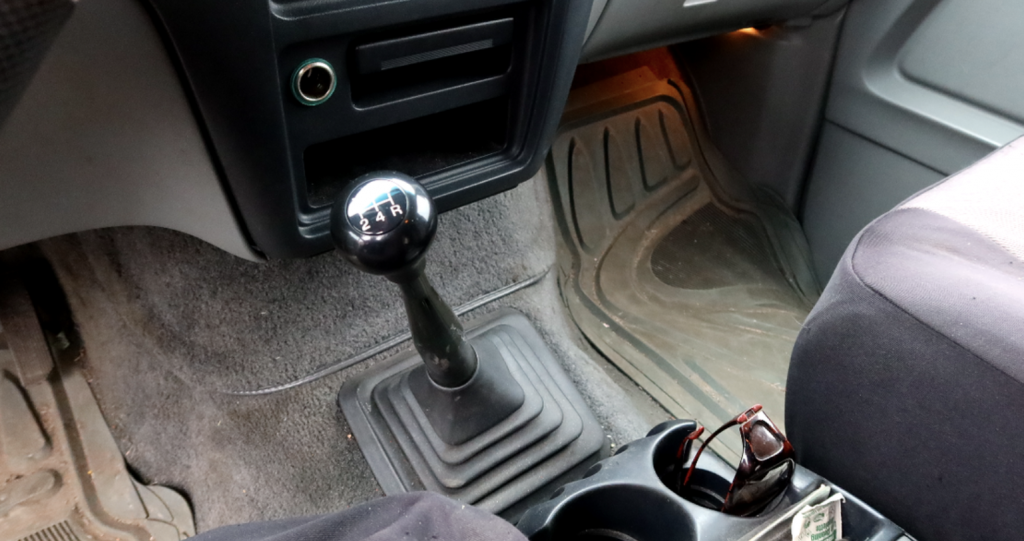 Last time, reader JamesRL sparked quite the discussion about the Dodge Spirit R/T. Most enthusiasts today may see a Dodge Spirit and dismiss it as a disposable pile of trash. However, JamesRL says that there is a version of the Spirit worth looking at, and it’s the Spirit R/T. The Spirit R/T is a sedan motivated by a 2.2-liter turbo four making 224 horsepower and 217 lb-ft torque. That engine and the vehicle’s small size made the Spirit the fastest sedan built in America at the time. It outgunned the Taurus SHO and Chevy Lumina Z34, and Dodge was so confident in its performance, its ads dared you to buy a Spirit R/T and go after the European imports, too.

Today’s Holy Grail is a departure from most of the vehicles featured in this series thus far. This van isn’t the fastest thing on the road or a secret hot rod. It wasn’t built out of a need to solve a silly issue or the most important vehicle built by its brand. Instead, it’s a first-generation minivan. Chrysler kicked off a craze with the 1983 introduction of its minivans. Families now had a comfortable way to transport seven people with a vehicle that got good fuel economy, carried lots of cargo, and could be parked in a garage. Other automakers put their own interpretations of the idea to market, and soon, America was in love with the minivan. The Ford Aerostar was one of those different takes on the minivan concept, and Ford’s idea was for a van with even more capability.

As Hagerty writes, the beginnings of the Ford Aerostar come from one of those responsible for Chrysler’s minivans: Lee Iacocca. In the early 1970s, Iacocca was an executive at Ford, and he had ideas for products that Ford should put to market next. One of them was for a van that sat no higher than six feet, or short enough to fit in an American 7-foot garage. Iacocca saw sales in a vehicle with the practicality of an Econoline but in a smaller form factor. In 1972, Iacocca’s idea became a prototype called the Carousel. It was smaller than a Volkswagen Bus, but maintained the body-on-frame construction and massive 460 V8 of the Econoline.

Then the 1973 Oil Crisis rolled around, and Ford pumped the brakes on the project. In 1978 Iacocca would find himself at Chrysler, where the garage-able minivan would become reality.

Back at Ford, the smaller van concept didn’t die, and the concept evolved. Now in tune with the times, Ford’s van concept would now focus on fuel economy, targeting the same fuel economy as a compact car. This van wouldn’t just target compact car fuel economy, but Ford also wanted it to seat seven people in luxury sedan comfort, carry cargo, and have a tow rating similar to a full-size vehicle. Oh, and the van would be all of that and still fit in a garage.

Ford would spend more than $300 million putting this van together. This was a ton of money, but not as much as the Blue Oval spent on other projects at the time. The Ford Taurus cost $3.5 billion and the Fiesta $870 million. And Chrysler committed $700 million towards its minivans.

Despite the smaller investment, the Aerostar was unique. Departing from the norms of the Econoline, the Aerostar would be a unibody van reinforced with frame rails, and instead of metal bumpers, it would get integrated plastic bumpers. Plastic would also be incorporated into the hood and tailgate. It would carry seven people, 4×8 sheets of plywood, and more with its 2,000-pound payload. And important to Ford, it could still park in a garage and haul a trailer. The fact that it could tow a trailer was a selling point. 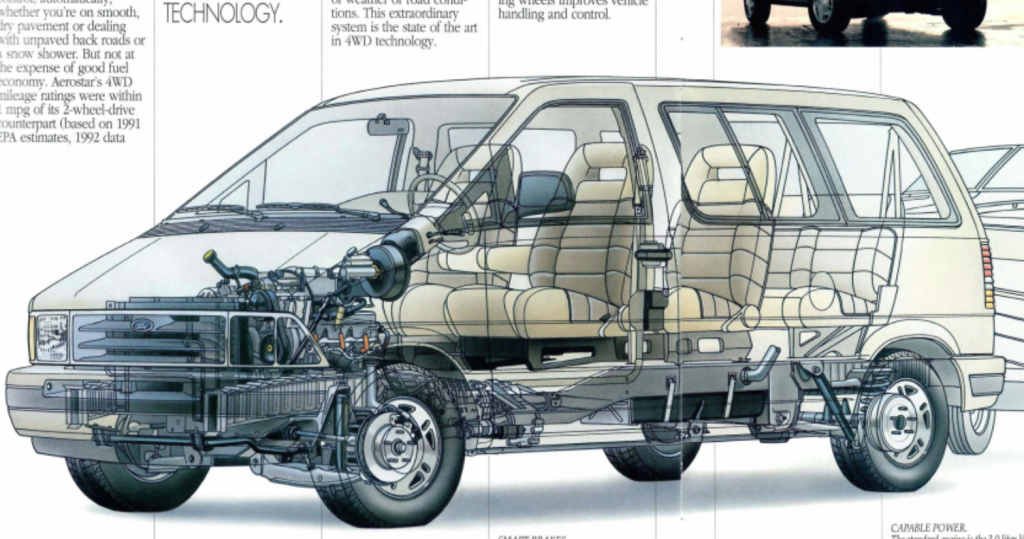 In 1985, Popular Science wrote a showdown of all of the American minivans on the market and coming to market at the time. In that comparison, the Chrysler minivans went up to bat against the Chevrolet Astro, the then-upcoming Aerostar, and what was supposed to be American Motors’ effort, the Renault Espace.

In the article, Ford and General Motors touted their rear-wheel-drive minivans as being able to tow 5,000-pound trailers, while the front-wheel-drive Chrysler minivans could at best tow 2,000 pounds. Chrysler fired back, saying: “Ask them how their vans handle in snow and ice.” The Chrysler and Renault vans also offered low floors thanks to their FWD layouts. And no matter which van you chose, you got a variety of seating options from beds, reversible or removable seats, or bucket seats for passengers.

The Aerostar would do it thanks to a thorough parts-bin raiding from Ford, with the Ranger giving up its brakes and looking inside, you’ll spot all sorts of parts that were used elsewhere.

At its 1986 launch, you could get an Aerostar fitted with a 2.3-liter Lima four making 100 HP, a 2.8-liter Cologne V6 making 115 HP, or a 3.0-liter Vulcan V6 making 145 HP. The Lima engine shared a home in the Ranger as well as the Mustang. The Cologne V6 was shared with the Ranger and Bronco II. And the Vulcan was found in the Taurus. Later, the Aerostar would get the 4.0-liter Cologne V6 making 160 HP that was shared with the Ranger and the Explorer. The Vulcan would make a later appearance in the Ranger, too. And that’s just a sampling, as these engine families were found in the engine bays of lots of Ford models throughout history.

You could pair these engines to an automatic transmission, but David and reader CJ think the Holy Grails of these vans are the ones with the manuals. Yep, you could get your rear-wheel-drive V6 cargo van with a row-your-own. From an email CJ sent to David:

Don’t know if you remember me or not. I showed you my “Holy Grail” manual Aerostar when you stopped off in Minneapolis Last year. Well, I thought I’d share with you my latest purchase (ok I bought it October 2021) but I have added another Manual Ford Aerostar to my fleet.

This one is quite different. It is an extended cargo van with the ‘barn doors’ on the back. I think that makes this one quite unique being extended cargo and not just a standard length one.

It’s very basic, vinyl seats, A/C that sort of works, and no cruise control. Oh, and if you’re wondering, this one has even less rust than the one you looked at.

Now if only I could find a good rear bumper cover 🙂

We very much enjoyed the photos of his van. For further context, David was bitten by the manual Aerostar bug back in 2018, and he had this to say about it:

Obviously, 145 hp and 165 lb-ft of torque aren’t amazing figures, but come on, it’s a 3,400 pound minivan with rear-wheel drive and Ford’s M5OD five-speed manual—a Mazda-sourced stick that, while maybe not the heaviest-duty trans, is a hell of a lot of fun to row through, and its parts are readily available. (A version of this trans was used in the Ford Ranger, F-150, Bronco, Explorer and a whole bunch of other Fords from the ’80s to the 2000s).

That Vulcan was just five horses short of the 2.5-liter turbocharged inline-four that powered the fabled turbocharged Caravan. Though, the Aerostar weighed at least 500 pounds more than the Chrysler. In David’s older piece, readers suggested that the weight wasn’t too much of a hindrance, as there was more than enough power to spin those rear wheels. Apparently, if you try hard enough, you can be a hooligan with an Aerostar.

A total of 2,029,577 Aerostars were produced between 1985 and 1997. How many of them are manuals is unknown. But if you live where I do, these vans have become rare simply because rust has taken so many of them off of the road.

David, Jason, and I saw a minty one just outside of our Airbnb during our California stay for the 2022 Los Angeles Auto Show. We couldn’t stop looking at the thing. David wondered if it was a manual, while Jason couldn’t stop looking at some sort of auxiliary light that was added to the van’s side. We briefly thought about knocking on the owner’s door to ask them about it.

In the end, vans like the Aerostar were overshadowed by the powerhouses that were the Chrysler minivans. But the Ford was important, too. It was a different take on the same idea and an interesting evolution in people haulers. Today, these vans probably have limited practicality. The few of them I’ve seen in recent times were junk haulers and Gambler 500 rigs, plus that weirdly minty one in California. The good thing about old minivans is that they’re dirt cheap. So, if you find one of these in your area, chances are they’ll be cheap. Then, you can own a time capsule from a time when SUVs weren’t yet king.

Mercedes is a lifelong fan of all things powered by an engine. When she isn't driving one of her five Smart Fortwos or her 14 other vehicles she could be found in the cockpit of a Cessna 172 or perhaps swimming in any body of water that she could find. She also has a deep love for buses of all kinds. Please send her buses. mercedes@theautopian.com Instagram: @mistymotors Twitter: @Miss_Mercedes30 Facebook.com/neonspinnazz
Read All My Posts »
PrevPreviousApple Delays The ‘Apple Car,’ Admits It Must Have Steering Wheel And Pedals
NextReport On Fastest Growing Brands For 2022 Might Be Bullshit But Here’s A ‘Great Value’ Cream Cheese-Themed Mitsubishi Mirage AnywayNext