Soon after waking up today, I started to feel a bit queasy. It’s not the aftermath of fajita night at Sneaky Dee’s, Subaru has genuinely crammed a nauseating amount of plastic farkle onto a Crosstrek for Tokyo Auto Salon 2023. Does anyone on earth other than maybe Jeep JK Wrangler owners think this looks good?

Officially called the Subaru Crosstrek Boost Gear concept, let’s break this shitshow down from bottom to top. Starting off on a high note, the Yokohama Geolandar M/T tires are a chunky-looking choice, and unquestionably the best alteration here. Sure, the black alloy wheels with blue accents that the tires are mounted on are a bit tacky, but the design is sound and the finish can be sorted with a couple of rattle cans. Unfortunately, things get worse from here.

Why the hell does a Subaru Crosstrek need side steps? Not only are they largely useless due to the car’s relatively tame ground clearance, they look to impede breakover angle, thus making this Crosstrek less capable. Talk about a cock-up. Sure, the mud flaps are mounted lower still, but at least those are flexible as opposed to rigid parts that will get damaged as soon as someone tries tackling something tougher than a gravel road.

Moving up from the side steps, there’s a lot of extra cladding on this particular Crosstrek. Unpainted plastic litters the lower edges of the doors, while the front valence cladding adopts two cheap LED strips and a simulacrum of a skid plate that seems devoid of actual function other than to make people who just moved to Bushwick feel rugged. These styling elements went out of fashion around the same time as listening to the Black Eyed Peas and using BBM, so they’re not exactly welcome additions here. Also, all the cladding really highlights Subaru’s insane insistence that rugged-looking things don’t need easily-accessible fixed recovery points. Tow hooks in the bumper? Absolutely not, here’s a roof rack tie-down in each fender flare as a consolation prize. 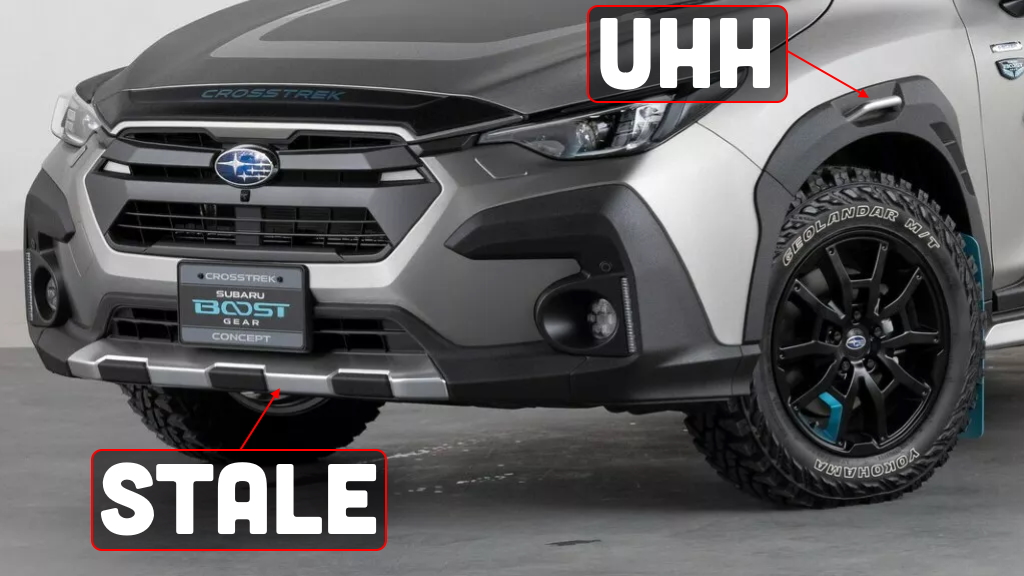 Oh, you thought the heinous cladding was over? Absolutely not. The mid-door areas get plastic rub strips that look as if a seven-year-old carved them out of polystyrene, plus there’s what can only be described as a tumor on the D-pillar. Alright, now the plastic cladding is well and truly over, thank god. Time to move on to another piece of unpainted plastic, a new grille that seems surprisingly fine. In fact, I reckon I prefer it over the fussy grille on standard models.

Hold on just a little bit longer, we’re not done yet. Above the grille sits a hood deflector that’s sure to be a hit with people who don’t believe in paint protection film, and topping it all off is a sheetmetal roof rack with an awning and one of those zillion-lumen collapsed star LED light bars that 17-year-olds bolt to their XJ Cherokees. You could probably replicate the entire roof setup with a single Amazon order and, although it’ll likely be noisy, you probably won’t notice a difference over the roar of the tires. 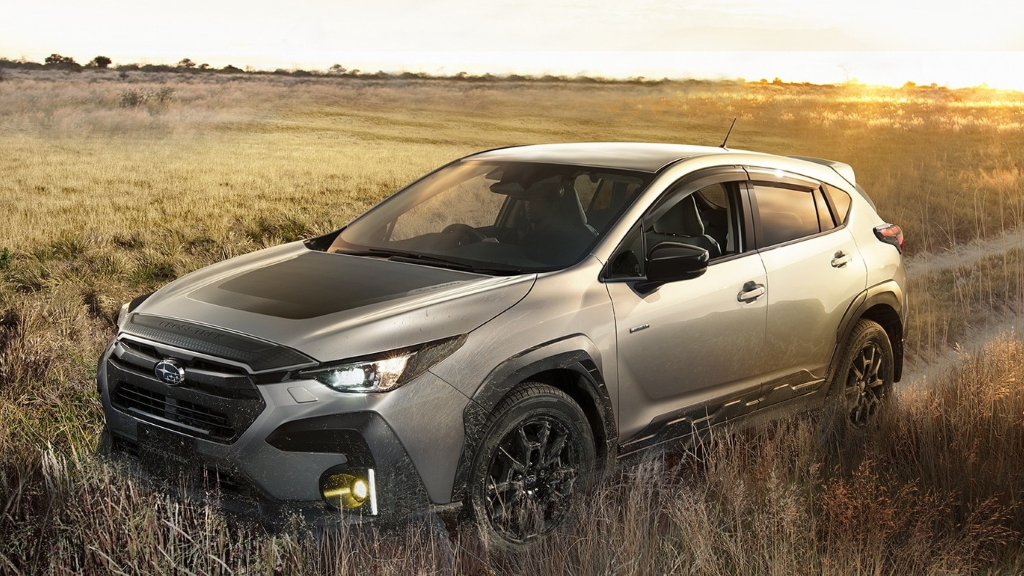 If you’re wondering why I’ve dedicated so many words to this woeful shot at customizing a subcompact crossover, it’s because some of these add-ons aren’t one-offs. Certain bits like the lower door cladding, LED accent strips, and hood deflector are available as Subaru dealer-installed accessories in Japan, plus this assorted tat seems to fall close to the ideology of Subaru’s established Wilderness brand. I wouldn’t be terribly surprised if we see some sort of extra-clad Crosstrek on sale in North America at some point for extra protection against the bollards at the Starbucks drive-thru.

Really, someone should just cancel Subaru’s Amazon Prime account. I don’t know what sort of person looks at the Crosstrek Boost Gear Concept and thinks it looks great, but I do know that I wouldn’t want them anywhere near me. Thankfully, the 2023 Tokyo Auto Salon only runs from Jan. 13 to 15, so at least this uncouth creation won’t disgrace your eyes for long.

Thomas is a Nu Rave-blaring, heel-toe downshifting, maple syrup-swilling, chassis-geeking, junkyard parts-hauling, floppy-haired scenester who's been writing about cars since college. His current ride is a 2006 BMW 325i with the six-speed manual gearbox. Instagram: @thomas.hundal Twitter: @thomashundal
Read All My Posts »
PrevPreviousA Man Wanted To Travel Like A King, So He Built Three Massive Camelot-Themed RVs
NextEverything Is Cold And The Wind Feels Like An Ice Laser: Day Two Of David’s Terrible California MoveNext