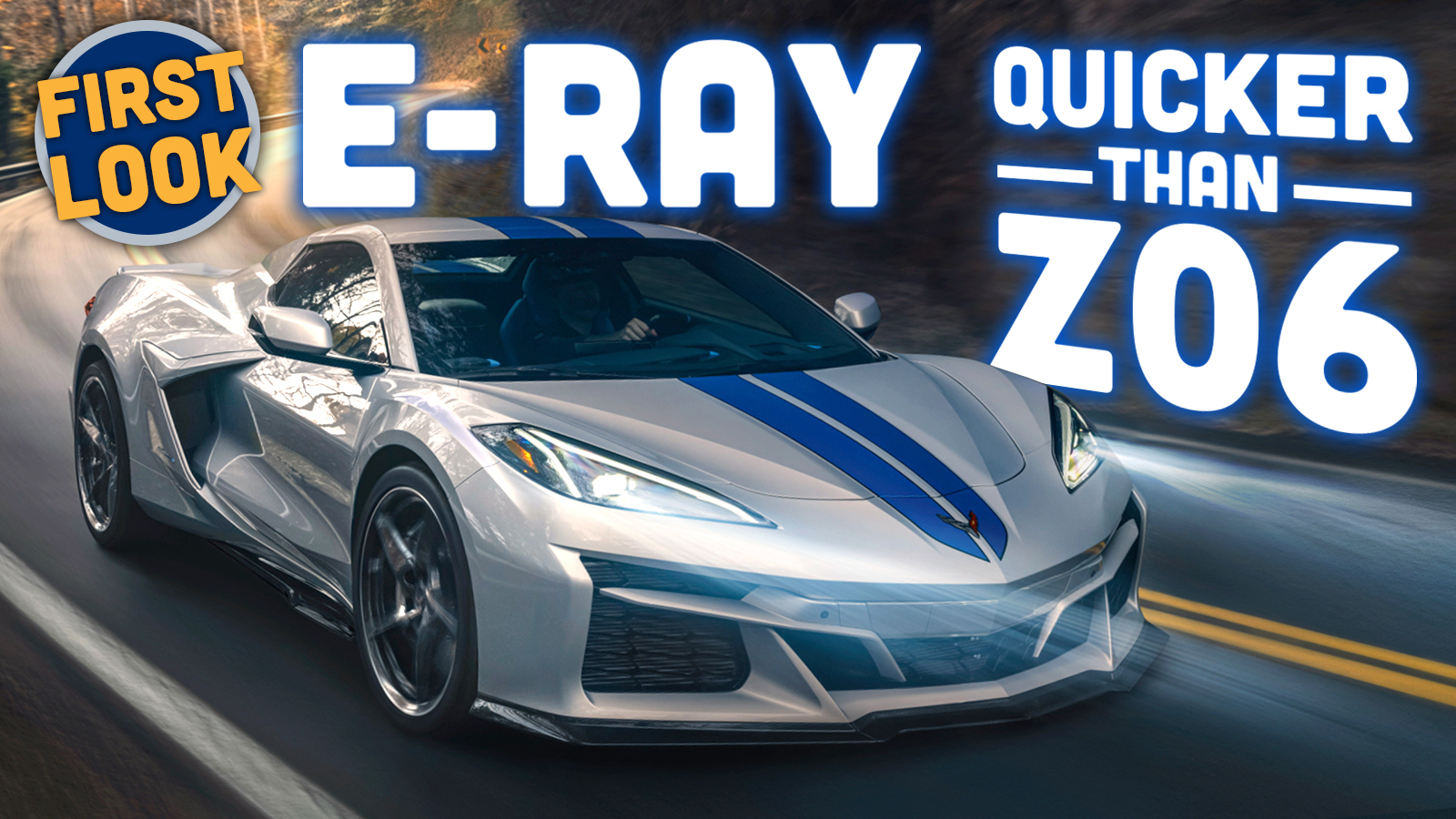 After enthralling the public with the performance bargain Stingray and the howling Z06, it’s now time for the 2024 Chevrolet Corvette E-Ray to bring hybrid supercar tech to the sports car segment. Brace yourselves, this one’s gonna be quick. In fact, the all-wheel drive hybrid Corvette is the quickest production Corvette ever built. And that’s just the start. 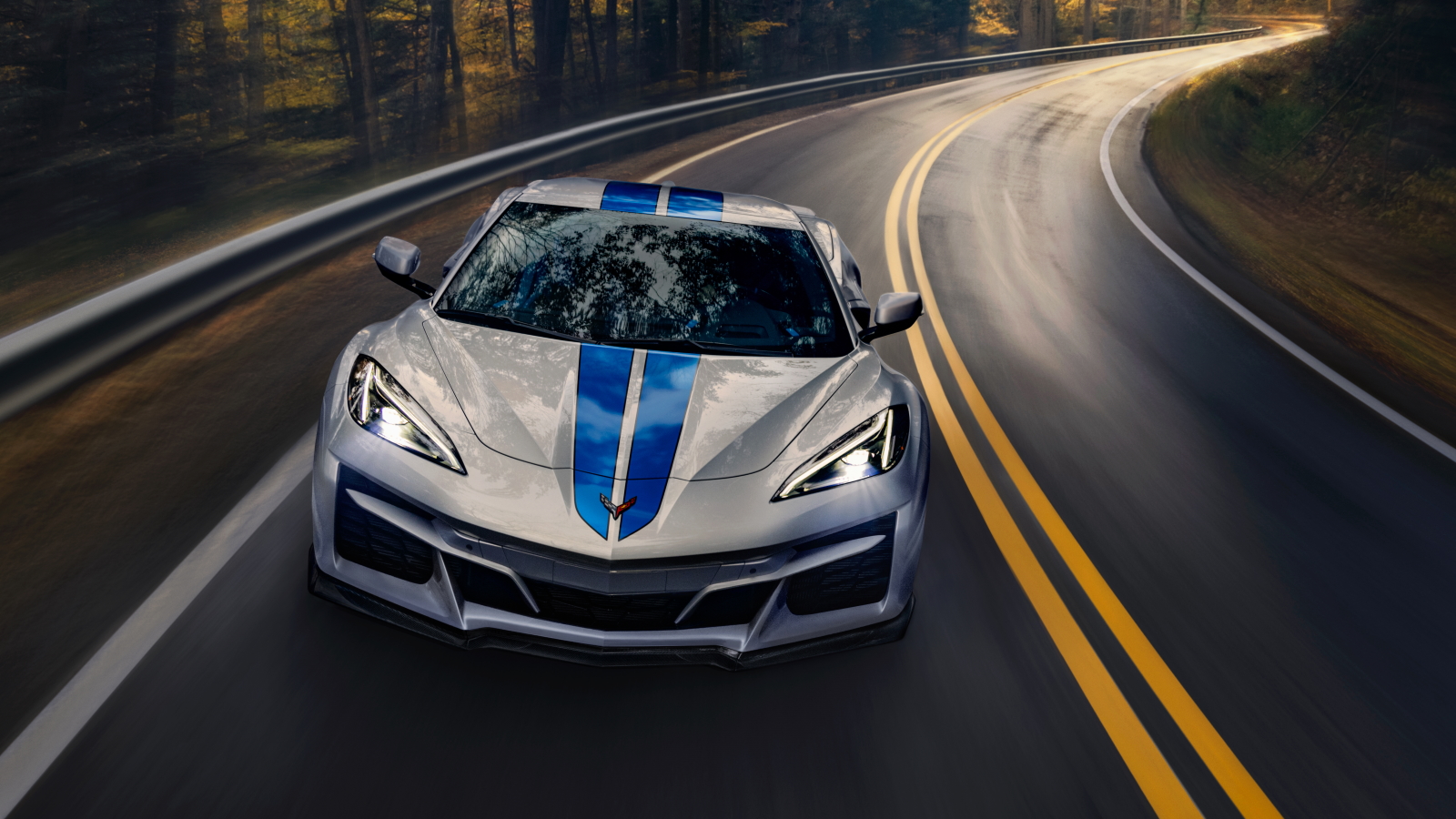 When the C8 Corvette debuted, it was fairly obvious that Chevrolet was planning some sort of electrification. Come on, nobody designs a car with a huge central tunnel without intent to put something in that space. The result?

Chevrolet claims that the E-Ray will run from zero-to-60 mph in just 2.5 seconds and blitz the standing quarter mile in 10.5 seconds. That’s a tenth of a second quicker than the Corvette Z06 in both metrics, all without the fancy quad-cam V8. It also means that the E-Ray is the quickest Corvette Chevrolet has ever made. So how does Chevrolet achieve such figures when the LT2 engine in the E-Ray makes the same power as it does in the Stingray? It’s all thanks to the instant torque of an electric motor and the repeatable traction of all-wheel-drive. 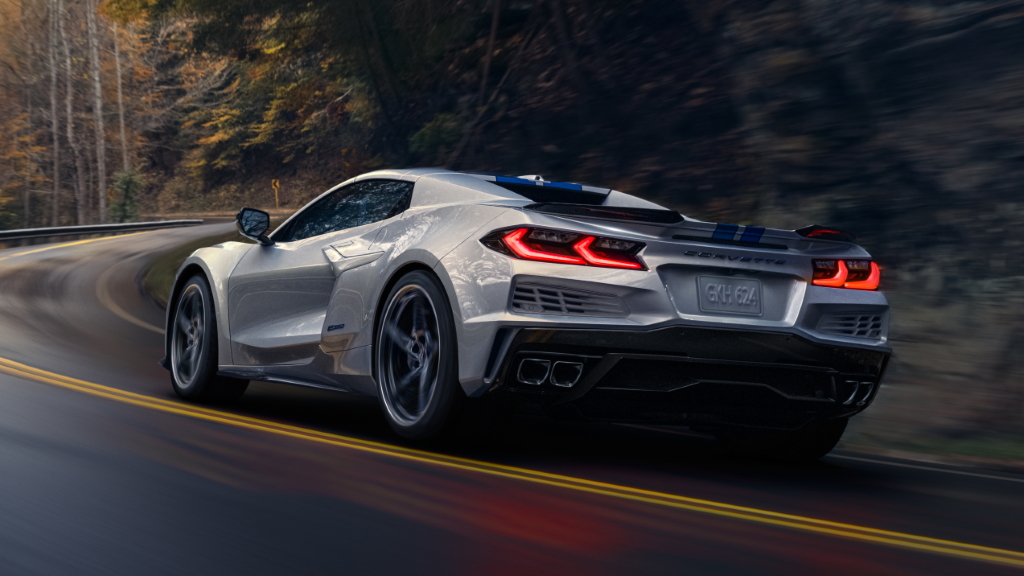 Sitting in between the front main structural rails is an electric motor good for 160 horsepower and 125 lb.-ft. of torque. That doesn’t sound like much, but Chevrolet claims it works with the 495-horsepower 6.2-liter naturally-aspirated LT2 V8 engine to put out 655 combined horsepower. As a bonus, the Corvette E-Ray stills has a frunk despite the front-mounted electric motor, which should keep Autopian co-founder Jason happy. Feeding that electric motor is a tiny little 1.9 kWh battery pack mounted in the central tunnel right between the seats, which should be fairly good for weight distribution. 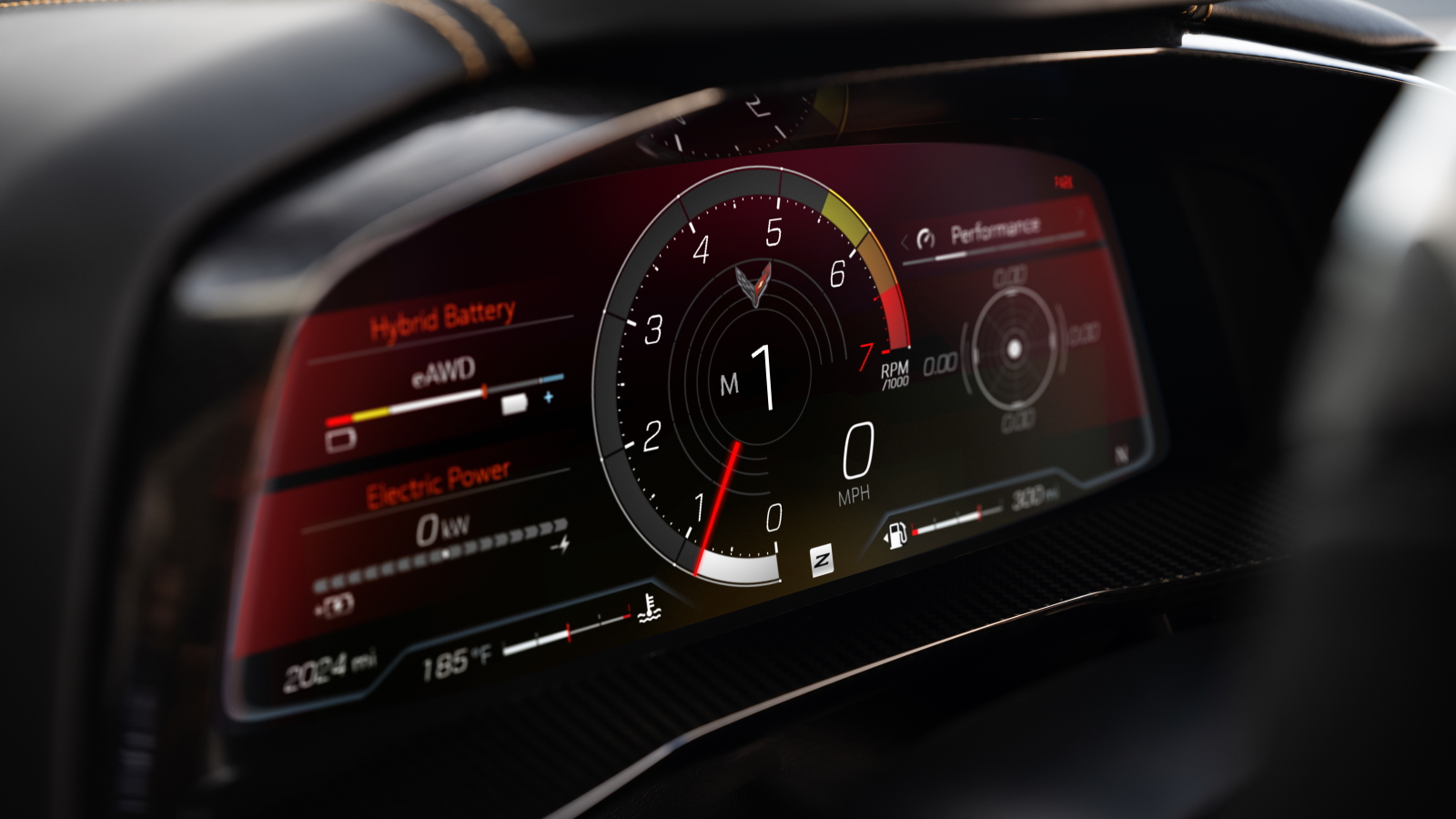 Partly because of the tiny battery pack, the Corvette E-Ray doesn’t sound like it’ll lure BMW i8 owners into trading in their billionaire-doored codpieces. In an all-electric drive mode called Stealth Mode, the E-Ray will only be capable of 45 mph before the burly V8 kicks in. What’s more, the E-Ray isn’t a plug-in hybrid, so you won’t be able to go solo in most HOV lanes without getting a ticket. On the bright side, there is a Charge+ mode to maximize the battery’s state of charge for trackday sessions, just in case an E-Ray owner is feeling ambitious. 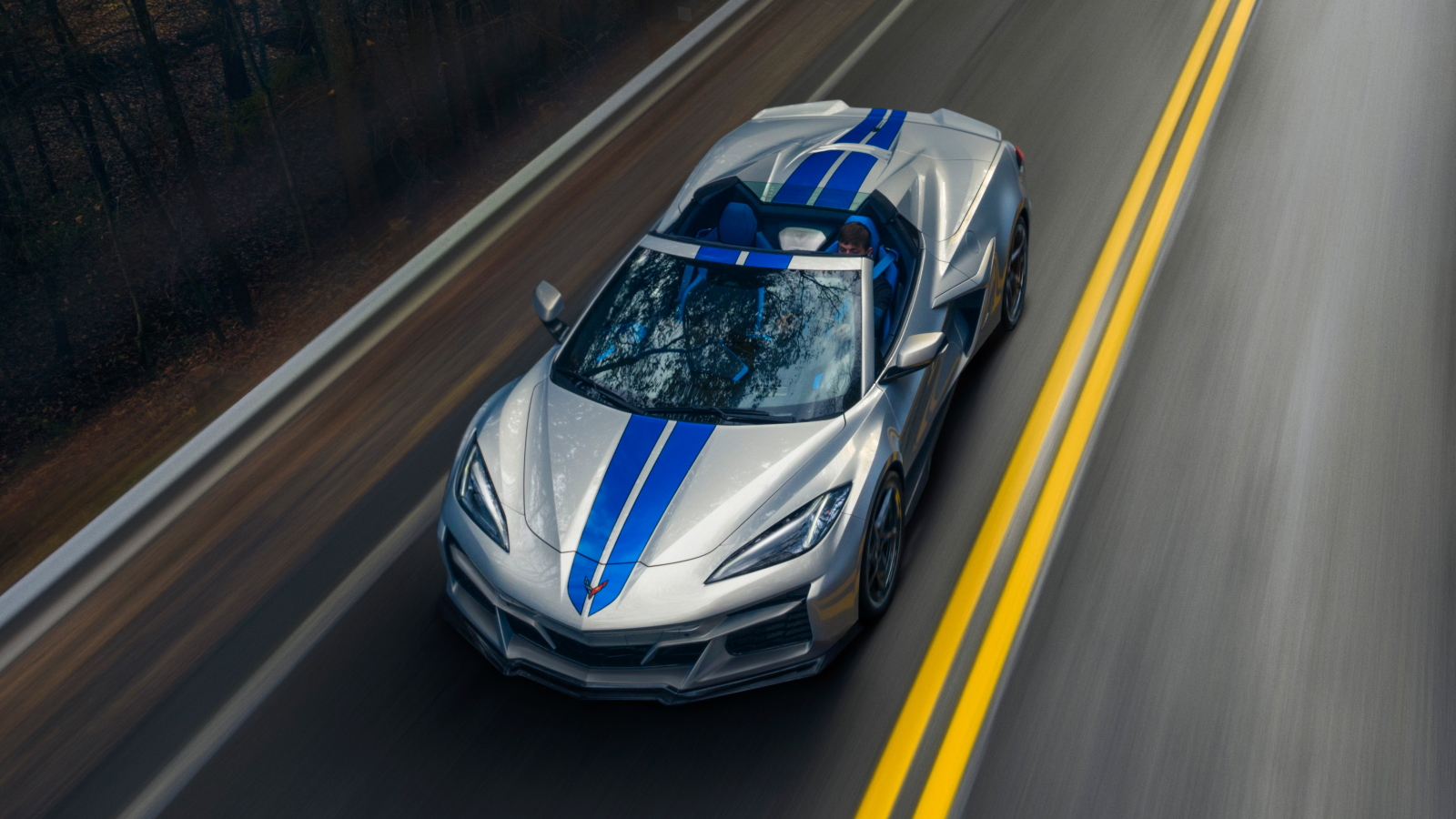 So what about other go-fast bits? Well, the Corvette E-Ray gets Brembo carbon ceramic brakes as standard, along with a special lightweight lithium-ion 12-volt battery for mitigating the weight of hybrid power. Magnetorheological dampers will also be standard and likely feel like witchcraft, although standard Michelin Pilot Sport all-season tires give off the impressions that the E-Ray is more focused on road use than it is on track use. 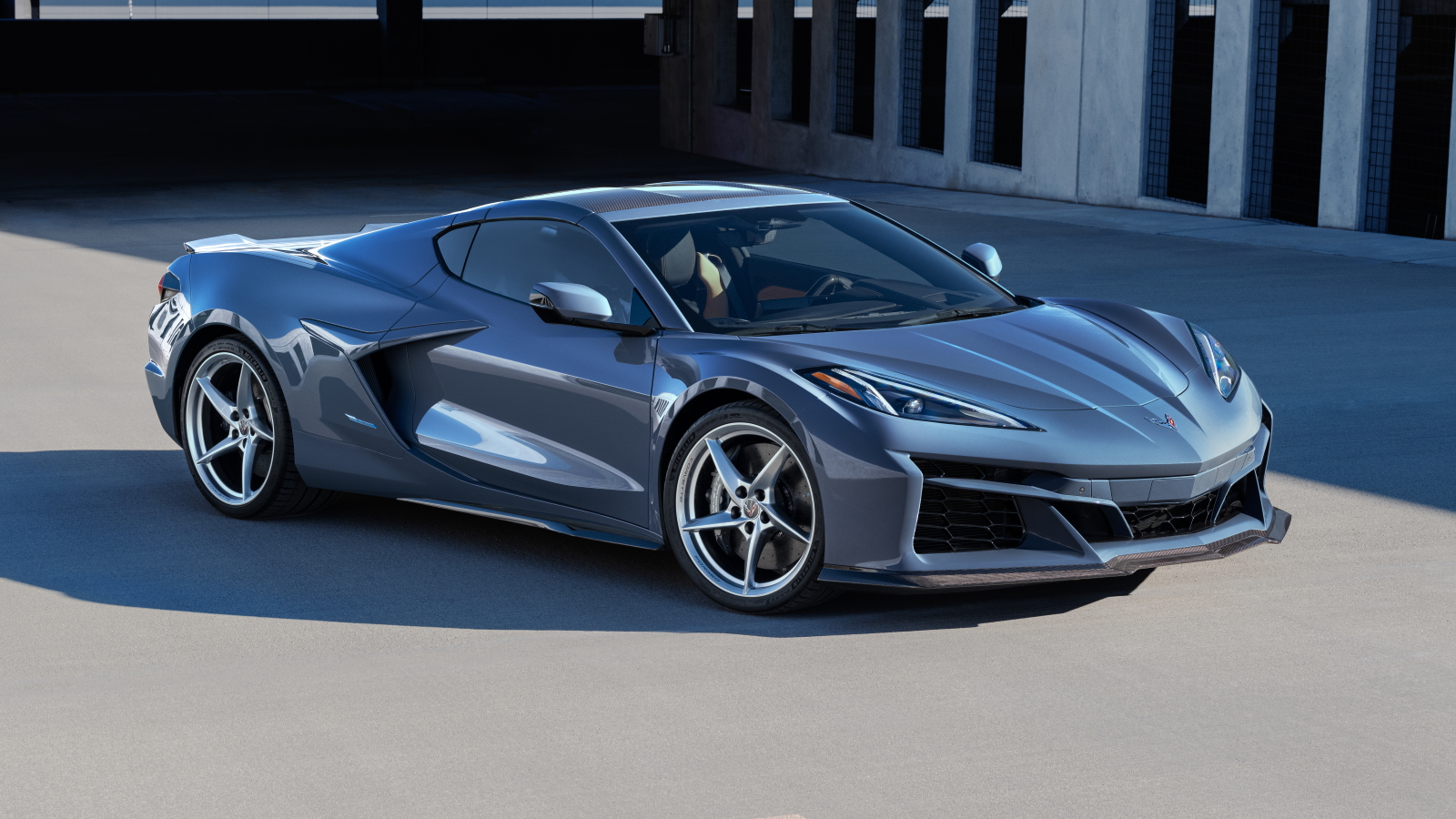 On the outside, the E-Ray gets a modified version of the Z06 treatment. Not only is the bodywork 3.6-inches wider than on a Corvette Stingray, it’s almost identical to that of the E-Ray’s angry flat-plane crank-equipped brother. Mind you, there are a few easy tell-tales to separate E-Ray from Z06 aside from badging. For starters, all the black grille bezels and rear heat extractors you’d find on a Z06 are color-keyed to the E-Ray’s paintwork. It’s a little bit ‘90s given how fussy the grillework can be, but I reckon the right spec could pull the monochrome look off. Then there’s the exhaust setup. Instead of four centrally-located exhausts showing at the rear of the vehicle, the E-Ray has two exhaust tips on either corner of the rear bumper with a vent in the middle. The Italianate five-spoke wheels are an E-Ray exclusive, a dead giveaway if you ever see one of these cars parked up, but I suspect the hybrid pushrod V8 sound signature will be a more helpful differentiator if the E-Ray in question is on the move. 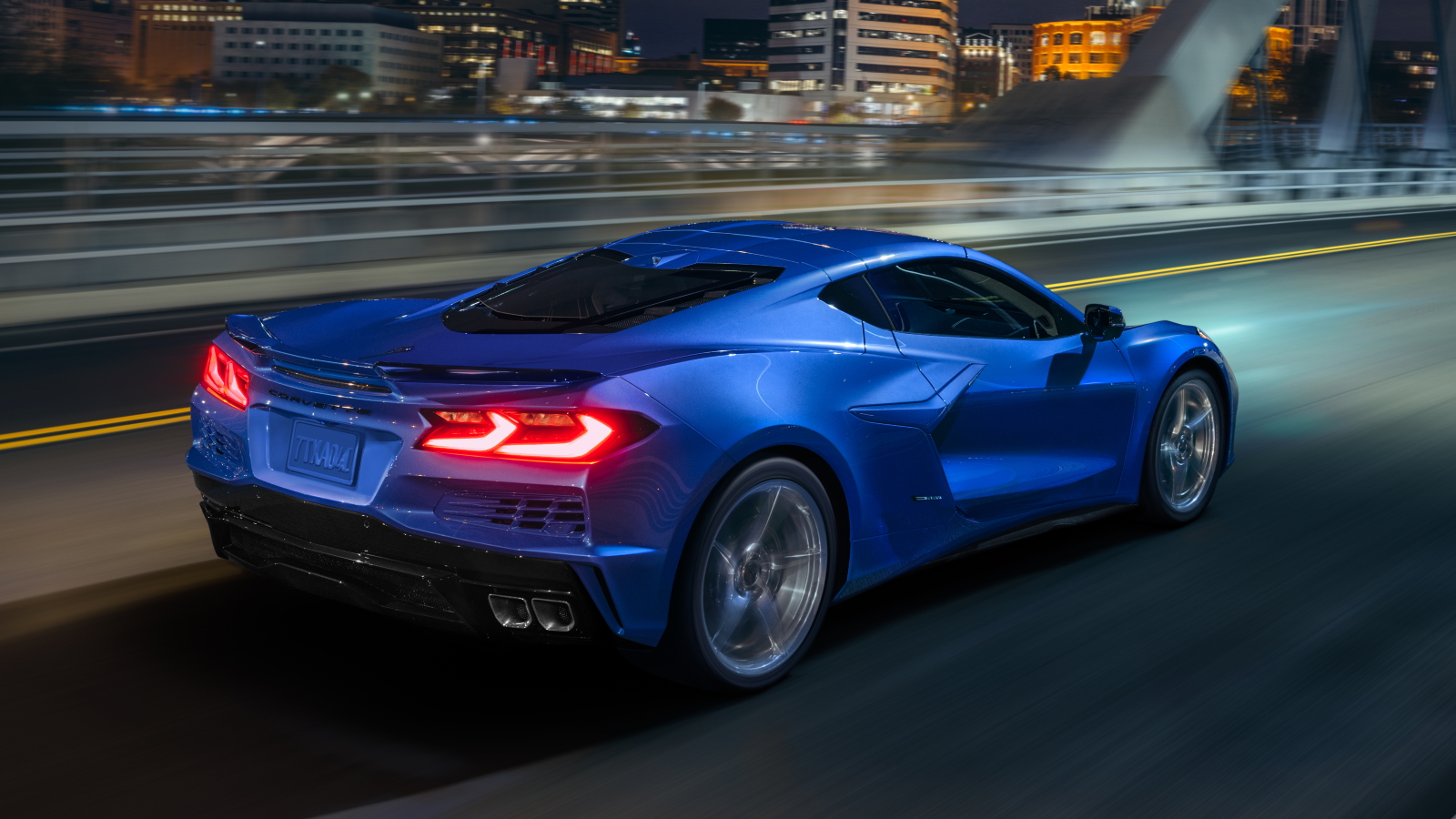 What we have here, in some ways, is Chevrolet’s idea of a Porsche 911 Turbo. It’s a monstrously quick sports car with a grand touring bent, available in coupe and cabriolet forms, capable of spitting torque to all four tires in the snow yet still carving up Mosport should the occasion arise. Of course, since the Corvette brand caters more towards New Balance aficionados than middle-aged private equity professionals with irritatingly white teeth, the starting price tag isn’t north of $182,000 like it is with the car from Stuttgart. 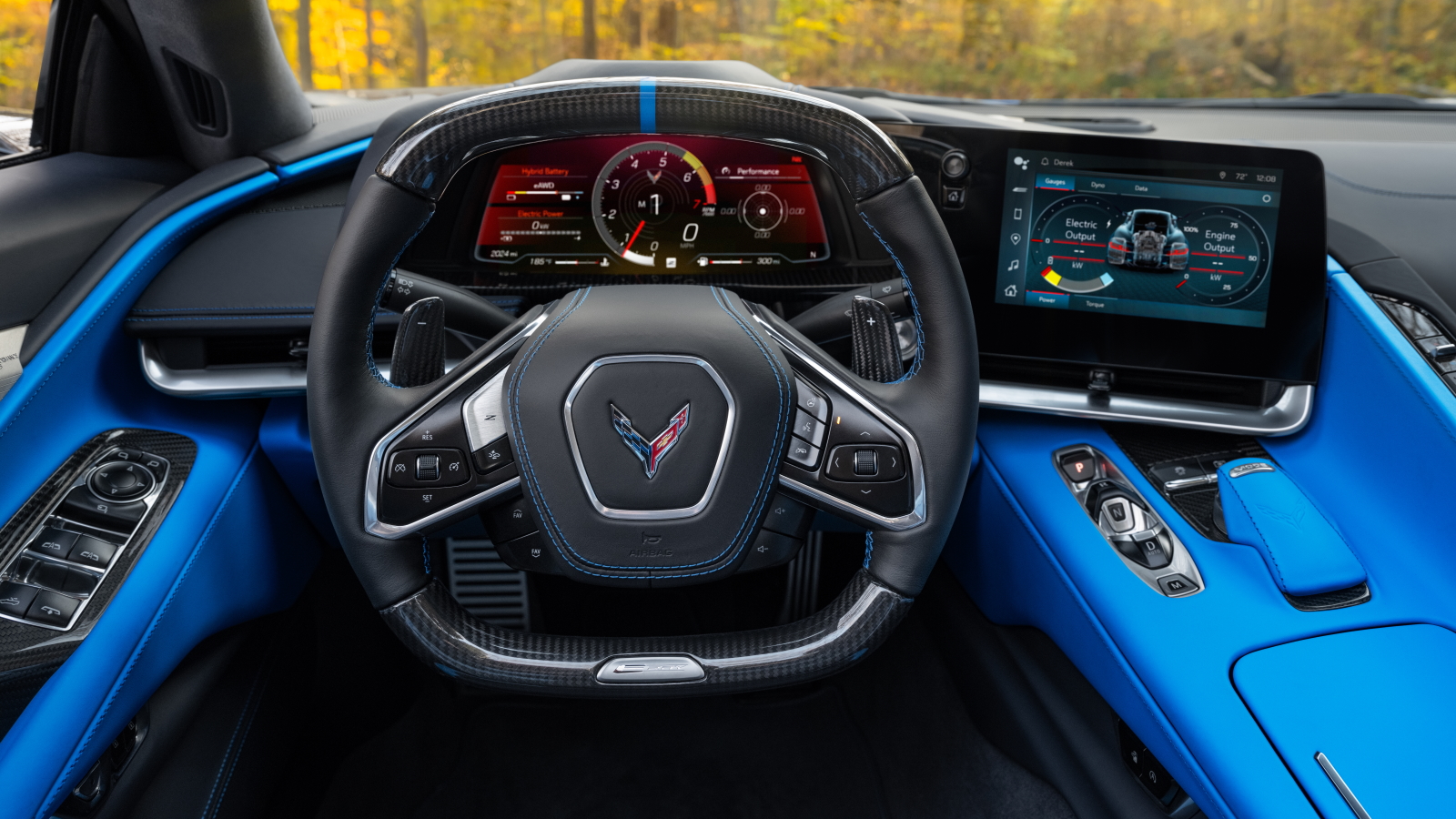 However, that’s not to say that the Corvette E-Ray is cheap. Chevrolet says that when this electrified sports car goes on sale later this year, it’ll carry a base price of $104,295 for the 1LZ Coupe trim. Expensive for a naturally-aspirated Corvette with a cam-in-block V8, but not bad for a hybrid that allegedly does zero-to-sixty in 2.5 seconds.

But How Will It Handle? 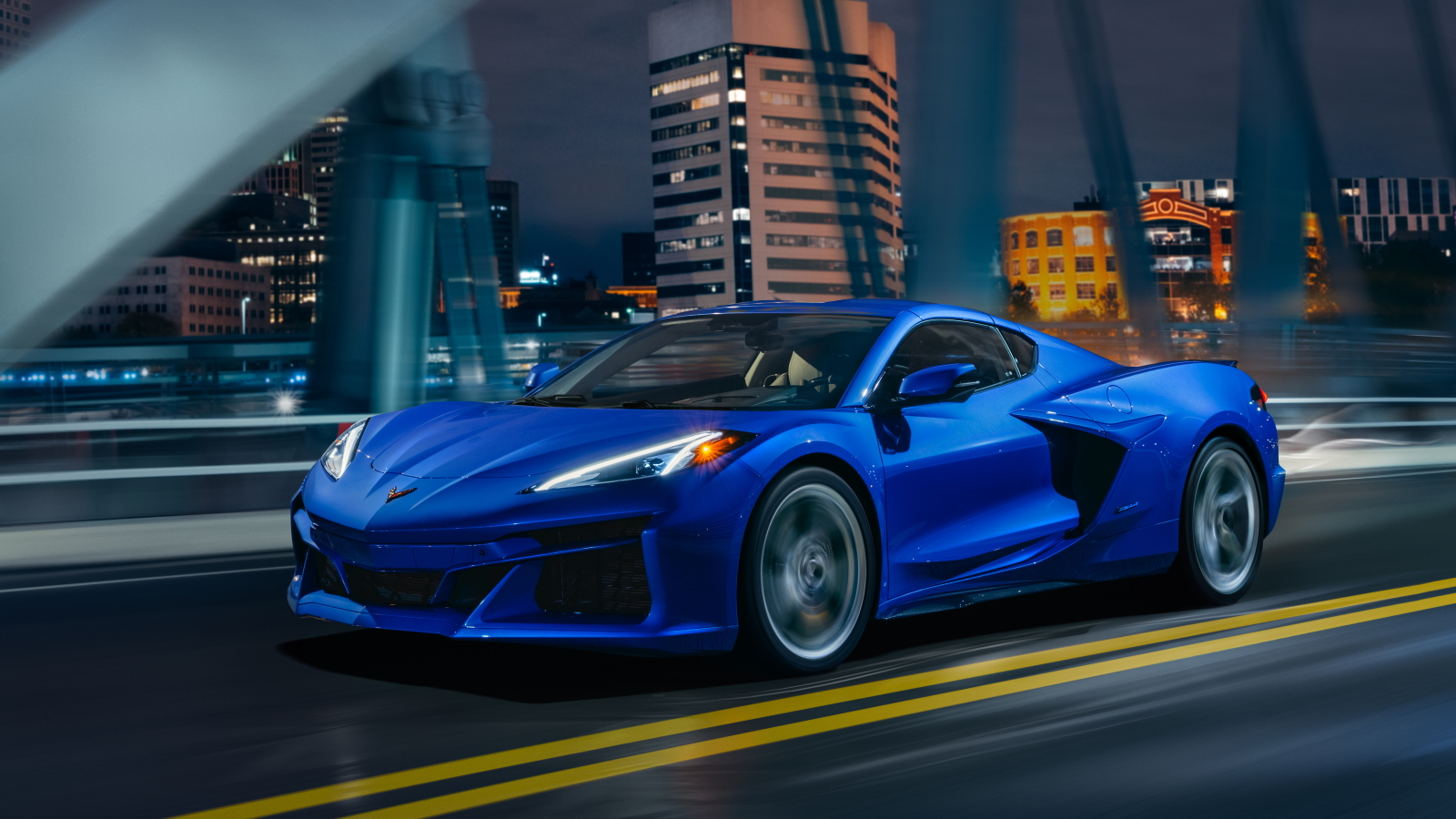 As it sits, the base-model Corvette Stingray is a bit of a marvel in that it’s a rear-mid-engined sports car that doesn’t drive like a rear-mid-engined sports car. See, the big benefit of a rear-mid-engined layout is that the mass is fairly centered within the chassis. Whether you take a cheap used Porsche Boxster or a McLaren 570S out for a test drive, you’ll realize that most rear-mid-engined sports cars are imbued with the agility of houseflies, able to change direction almost telepathically for anyone used to front-engined cars. Based on my experience driving a 3LT Z51, I’ve found that the Stingray with standard street alignment settings doesn’t. Instead, it rotates gradually, as it’s set up so that novices don’t suddenly find themselves backwards through a hedge. Add in the fact that the electric motor in the E-Ray is undeniably weight over the front axle, and it’ll be interesting to see if it exacerbates this behavior or if Chevy has something up its sleeve. 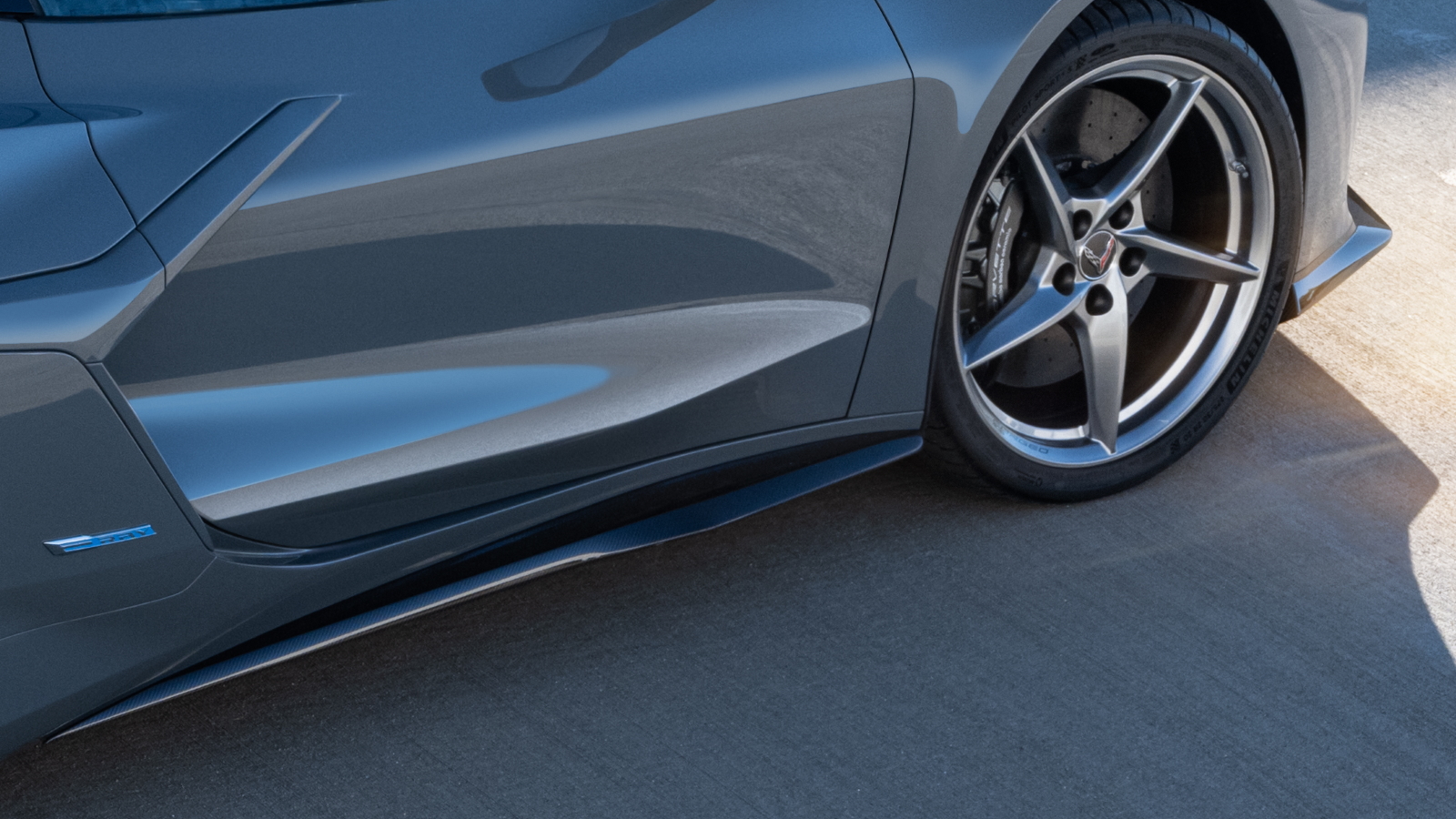 Then there’s the matter of steering. The standard C8 Stingray’s steering is well-weighted and linear but, I found, a bit devoid of feedback. You might get the odd hushed murmur up through the column, but that’s about it, and that’s without asking the front tires to manage torque along with steering and a great deal of braking. Mind you, if you seek driver involvement above all else, you’d probably happily heel-toe your way past your local Chevrolet dealer on the way to the nearest Lotus showroom, but again, this is GM: It might have something up its sleeve, and I’m excited to find out. 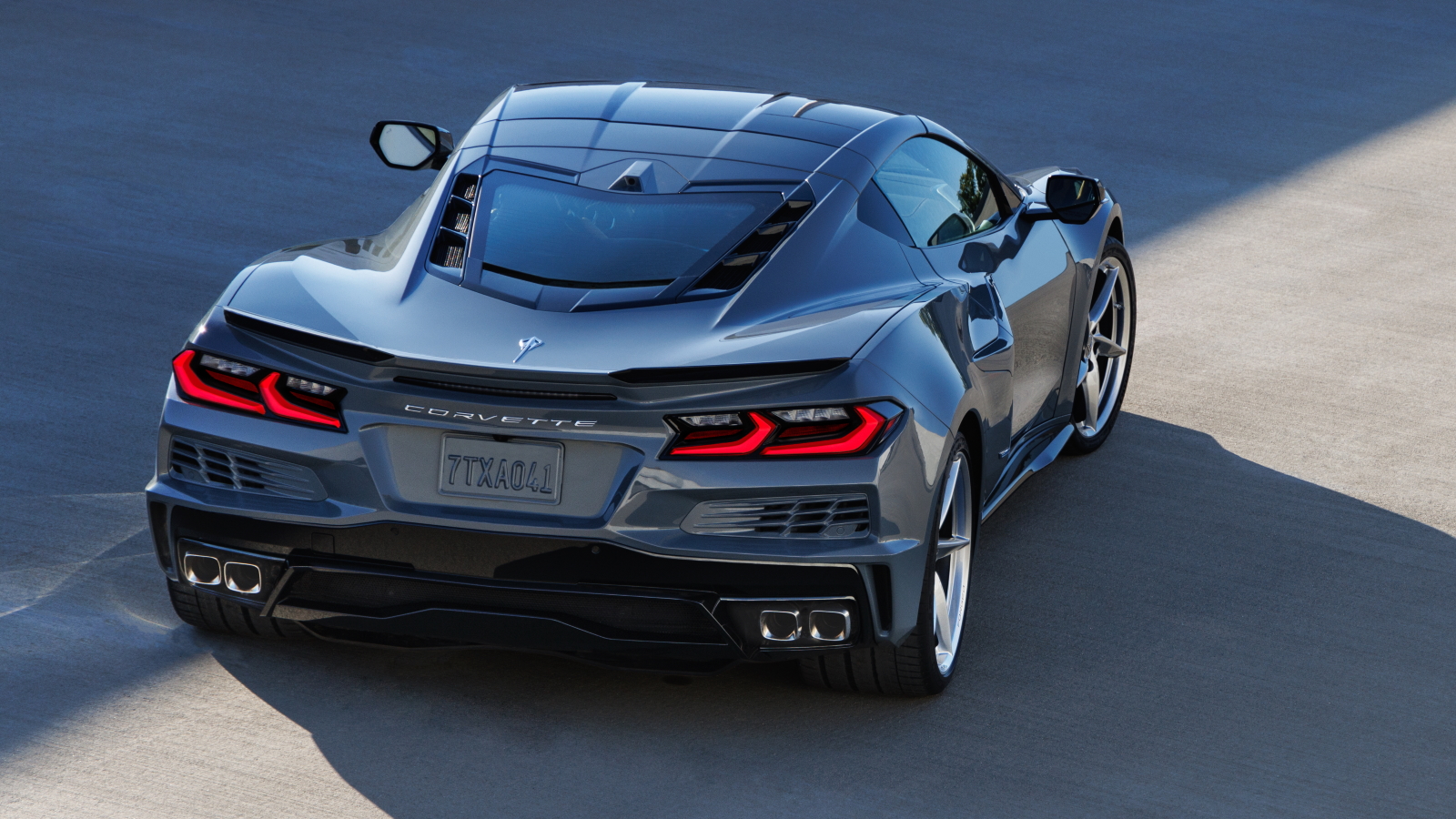 The Corvette has always been about bang-for-your-buck, and the 2024 Chevrolet Corvette E-Ray promises to take everything appealing about the base Stingray and crank it up a notch. It should combine no-joke supercar acceleration with GT car sensibility for posh sports car money, all while offering something no previous production-spec Corvette has – true winter confidence. Perhaps more importantly, the Corvette E-Ray is a fresh entry into the dwindling world of all-wheel-drive four-season sports cars priced around $100,000. The Jaguar F-Type is just about done and the Mercedes-AMG SL55 is knocking on the door of $140,000, which leaves just the Porsche 911 Carrera 4 and the Corvette E-Ray to battle it out in this space beyond 2024.

2024 Chevy Corvette E-Ray Leaks On GM Website And As A Result, The Whole Internet

Thomas is a Nu Rave-blaring, heel-toe downshifting, maple syrup-swilling, chassis-geeking, junkyard parts-hauling, floppy-haired scenester who's been writing about cars since college. His current ride is a 2006 BMW 325i with the six-speed manual gearbox. Instagram: @thomas.hundal Twitter: @thomashundal
Read All My Posts »
PrevPreviousA Car That Shares My Name: Cold Start
NextGoin’ To Graceland: 2008 Chevy Avalanche vs 2005 Chrysler 300Next