Camping Tech: Some RVs Are Going To Get SpaceX Starlink Internet Right From The Factory 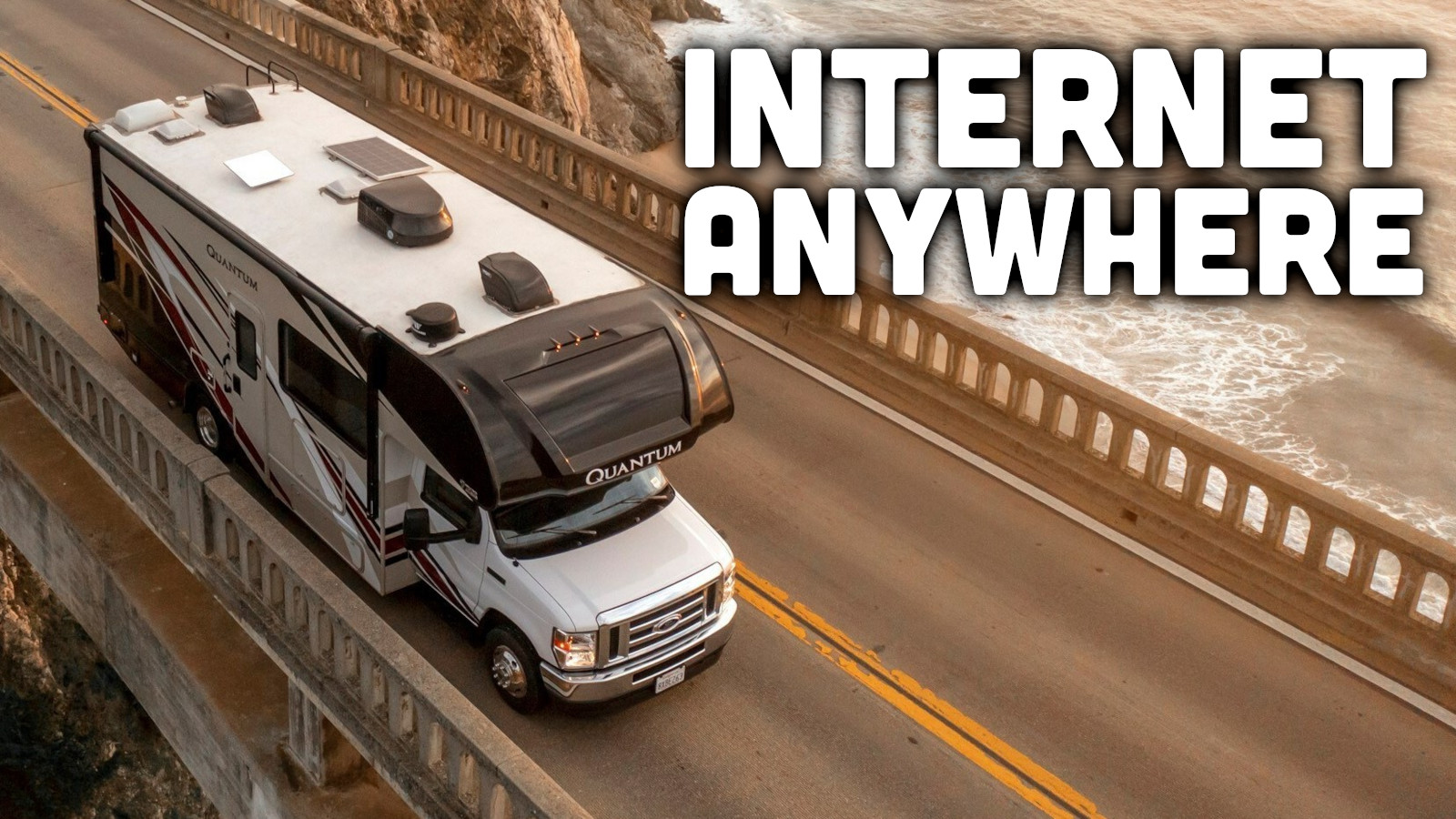 SpaceX and RV conglomerate Thor Industries are partnering up for an opportunity that could change the game for RVers who live and work on the road. Soon, RV buyers bringing home select units from Airstream, Entegra Coach, Jayco, and Tiffin will be able to have a Starlink satellite internet system right from the factory. Even better, they’ll be able to use them on the go!

The pandemic-fueled rise of working from home has allowed so many Americans to live out their dreams of seeing the country. At today’s Industry Day at the 2023 Florida RV SuperShow I found no shortage of people who don’t just camp in their RVs, but work in them, too. One of the big issues with working out of an RV is how to stay connected to the internet. After all, you can’t hand something to your boss from a national park, and I couldn’t write this post without internet access.

Staying Connected In An RV Can Be A Hassle

There are a handful of ways to stay connected. Perhaps the easiest is to find a place with public WiFi like a Starbucks or McDonald’s. Or you could use cellular-based internet and have access to the web effectively everywhere that your phone does. My wife and I use the latter option, and, honestly? It sucks.

We often camp in places where we’re too far away from any tower to get anything resembling an internet connection. This is usually fine for me–I love disconnecting from the web–but not so much for my wife Sheryl, an attorney who often finds herself unable to have client meetings or able to file documents in court. Often, this leads to us driving around until our hotspot works well enough to get the job done.

Thankfully, there are more options.

Look To The Stars

Today, Thor Industries announced that this year, a number of RVs under its umbrella will come equipped with flat high-performance Starlinks that can be used in motion. Thor is the first OEM to work directly with SpaceX on mounting Starlinks to RVs, and it says that you’ll soon find Starlinks on some Airstream, Entegra Coach, Jayco, and Tiffin models. Exact models aren’t noted in the company’s release and I didn’t find any Starlink-equipped models at the 2023 Florida RV SuperShow. These will be installed at the factory and Thor will even give you a one-month service credit. Thor expects that many of its customers will now be able to have high-speed internet just about anywhere they take their RVs.

There’s more good news, too, because you aren’t limited to a selection of Thor products when it comes to Starlink. The concept of using Starlink for an RV isn’t anything new. RV owners have already been using Starlink and some were even using Starlink in their RVs while they were moving. Doing this officially wasn’t allowed, and those who broke the rules risked losing access to the service. Things changed when SpaceX got FCC approval for Starlink’s use in moving vehicles. In October 2022, SpaceX announced a version of Starlink for moving RVs. It launched just last month.

The original Starlink portable system is $599, then $135 a month for the service. This is the one that SpaceX will not allow you to use on the move. If you want internet without stopping your RV, you have to cough up $2,500 for the flat high-performance dish, then pay $135 a month after that.

Providers like HughesNet and Viasat are popular with RVers, but they are an imperfect solution. For starters, neither HughesNet nor Viasat directly sell their products to RVers. If you go to their websites you’ll see that they advertise for home and business use. Viasat goes as far as offering internet for aircraft, but you won’t find anything for RV use.

Thus, if you want to use these services in your RV, you have to buy the equipment itself and then install it. Then, you can enjoy the internet in places where your phone or mobile hotspot will not work. If you’ve ever wondered, here’s how satellite internet works, from Viasat:

The way most internet works these days is a simple, three-part process: The internet service provider (ISP) gets the internet signal via fiber from a collection of data servers, moves that signal to a central station, or hub, then distributes it to the modems of individual subscribers.

Those first two parts tend to be the easiest to accomplish, while the third — getting the signal to those modems — is the tricky part. That final leg is often called “the last mile,” and for many homes without adequate internet service, it’s that last mile (or multiple miles) from the hub that makes the difference.

If you think about cable or fiber ISPs, they require a technician to come out and wire each location, then connect that to the local hub. Since most homes are already fully cabled, it’s relatively simple to connect all the homes in a neighborhood. If your home is not in a populated area where it makes economic sense for the ISP to serve you with short runs from the hub to your home, it’s less simple. In the case of cable or fiber, it may mean they don’t serve you at all. For DSL from the phone company, they might serve you, but the farther you go from the nearest central station, the worse the service gets.

And that’s why satellite internet became a way to bridge the digital divide for people outside the cable and fiber zone. Satellite ISPs like Viasat work in essentially the same three-step fashion, but instead of a central station, the internet signal is delivered via fiber to a large antenna (called an “earth station”) on the ground, which then moves the signal via radio waves up to our satellite.

In this model, the satellite is functioning like that central office, and that “last mile” is more like 22,300 miles — the altitude at which our satellites orbit. The signal comes back down to your home or office and is captured by an antenna (dish) outside your home that’s aligned with the satellite. From there, the signal goes into a cable through a hole in the wall that connects to a modem — just like any other ISP.

That note about alignment is important for RVers, because your camper isn’t going to stay in one place like a house is. For many, this means parking the rig and pointing the dish in the correct direction. This is where Starlink is in the right position to do well in the RV world.

SpaceX and its competitors operate with different models. Viasat and HughesNet both depend on a handful of satellites placed far off in geosynchronous orbit. Viasat says that its satellites fly at 22,300 miles. This is fine if the extent of your internet browsing is reading hot takes about cars, but not so much if you’re a gamer. Latency–how long a signal takes to get from one point to another and back again–gets as high as 600ms with satellite internet; terrible for games where accuracy is needed. In my experience, satellite internet is also terrible for Voice Over IP, that is unless you enjoy long delays. Being so far away impacts speeds, too, and HughesNet customers can expect up to 25 Mbps download speeds and 3 Mbps upload speeds. Viasat says it offers speeds as high as 150 Mbps.

Starlink does things differently. Rather than depending on a few huge satellites, SpaceX has been launching thousands of satellites into low Earth orbit. Currently, SpaceX has about 3,000 Starlink satellites orbiting the Earth at about 342 miles. Starlink promises higher performance from this setup, currently with up to 150 Mbps speeds for standard customers and latency closer to terrestrial internet at 20 ms. However, it should be noted that Starlink speeds have dropped because of congestion issues. SpaceX expects to launch more satellites to fix it.

SpaceX’s Starlink has been a controversial subject since its satellites first started launching in 2019.  Astronomers were concerned with how bright Starlink satellite constellations could impact highly sensitive telescopes and International Astronomical Union said that constellations of satellites can pose a threat to current and future astronomical infrastructures.

Will Starlink change the game of internet connectivity in RVs? In theory, it has the chance to. This is another RV product that I plan on testing. Since Thor didn’t even note exact models, it looks like we’ll have to wait a little longer for more information about this venture. When it does, you bet I’ll try to nab myself a unit to test out.

The Autopian Is Headed To One Of The Largest RV Shows In America. Here’s What You Can Expect

Here Are Some Of The Coolest New Campers I’ve Found For Under $35,000

Mercedes is a lifelong fan of all things powered by an engine. When she isn't driving one of her five Smart Fortwos or her 14 other vehicles she could be found in the cockpit of a Cessna 172 or perhaps swimming in any body of water that she could find. She also has a deep love for buses of all kinds. Please send her buses. mercedes@theautopian.com Instagram: @mistymotors Twitter: @Miss_Mercedes30 Facebook.com/neonspinnazz
Read All My Posts »
PrevPreviousMazda’s New 3.3L Turbo Inline-Six Puts Down Some BMW-Fighting Power
NextI’m Hosting A Junkyard Tour And Then A Wrenching-Themed ‘Going Away Party’ At My House In Michigan. You’re All Invited!Next