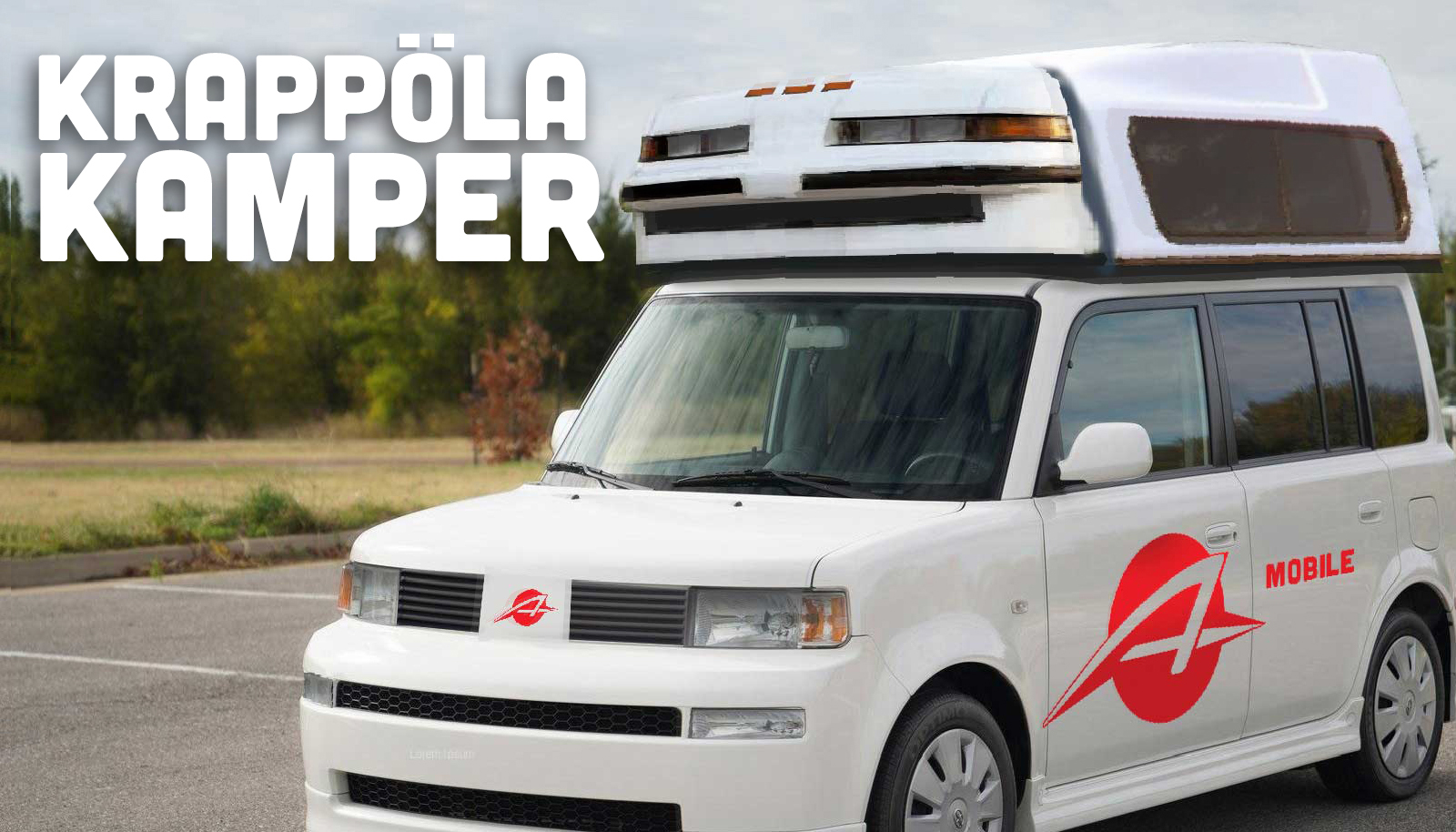 There are plenty of unsung heroes at the Autopian. Some things get the glory, while others work hard with little recognition. Let’s look at one of them.

We hear so much about vehicles like David’s Golden Eagle and the Changli of Jason, but look in the background of some recent pictures. Notice a white first generation Scion xB with bold AUTOPIAN logos on it? 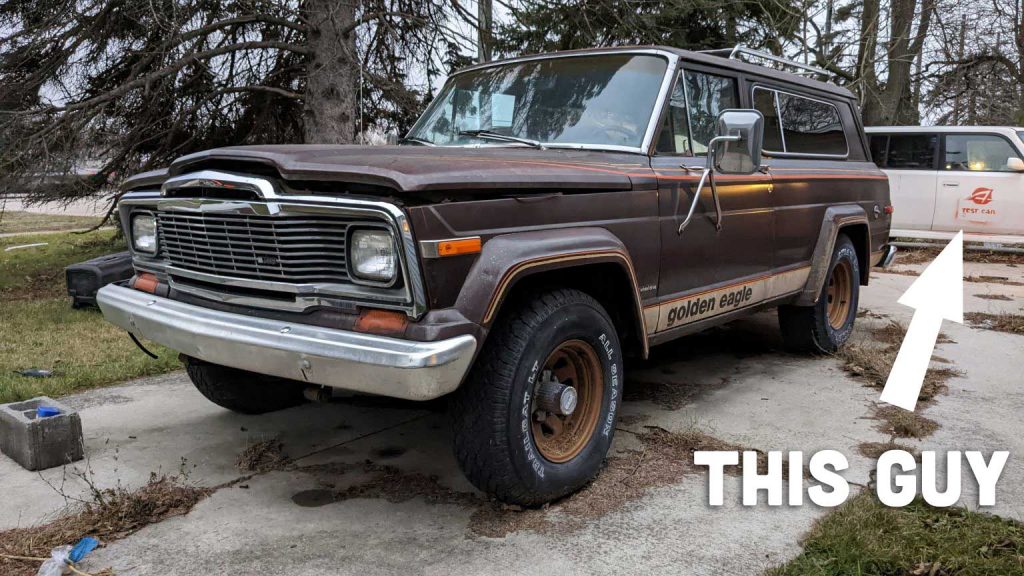 That’s what purports to be the site’s ‘test car’, though what these ‘test’ encompass I am completely unaware of. The only thing I am told is that there ‘are videos coming’ which one might guess will be of a highly intellectual level.  It appears that Jason is the Toaster Mafia member that owns it, and I assume that this car has already given its best years to transporting Torch and his long-suffering spouse and child around as a Regular Car before retiring. We hear nothing about this vehicle, and the fate of this car is likely a bit up in the air.

So what do we suggest doing with it? Well, what do we tend to propose with cars (or virtually any object larger than a Port-A-Potty with wheels on it) at this site?

Turn it into a camper, right?

Let’s grab a hypothetical Sawzall and get started. From what I’ve read, it sounds like much of the interior in this thing is biohazard level and needs to be mold remediated or stripped out anyway. To quote an unnamed staffer, ‘there is old rotten spaghetti in there, or ramen…ah, something that smells terrible’. A welding torch will burn off a lot of odors.

The idea of a super tiny camper has been discussed recently with cases such as a Mitsubishi Mirage that the owner converted (from new) into what must be one of the world’s smallest living and sleeping spaces: 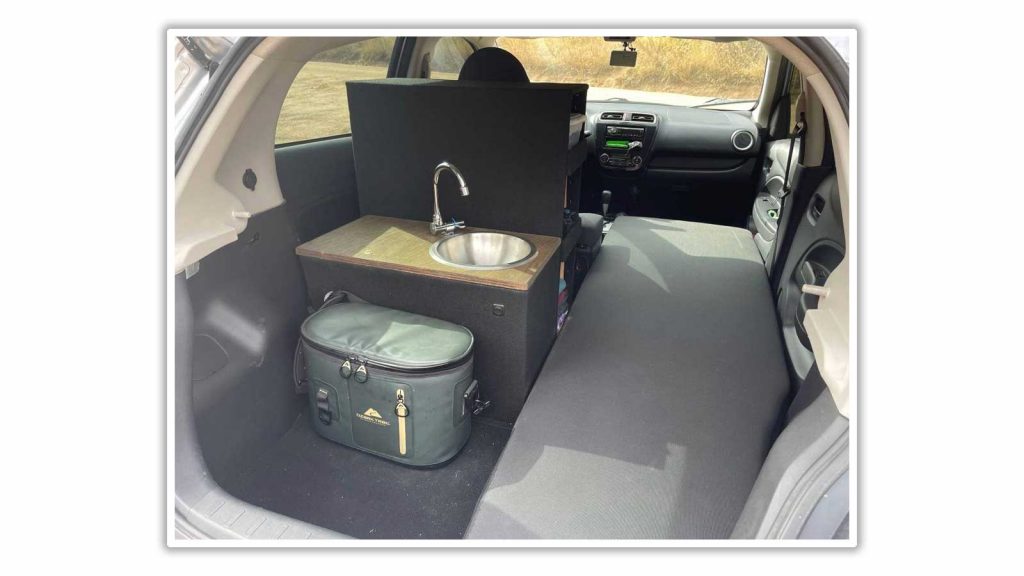 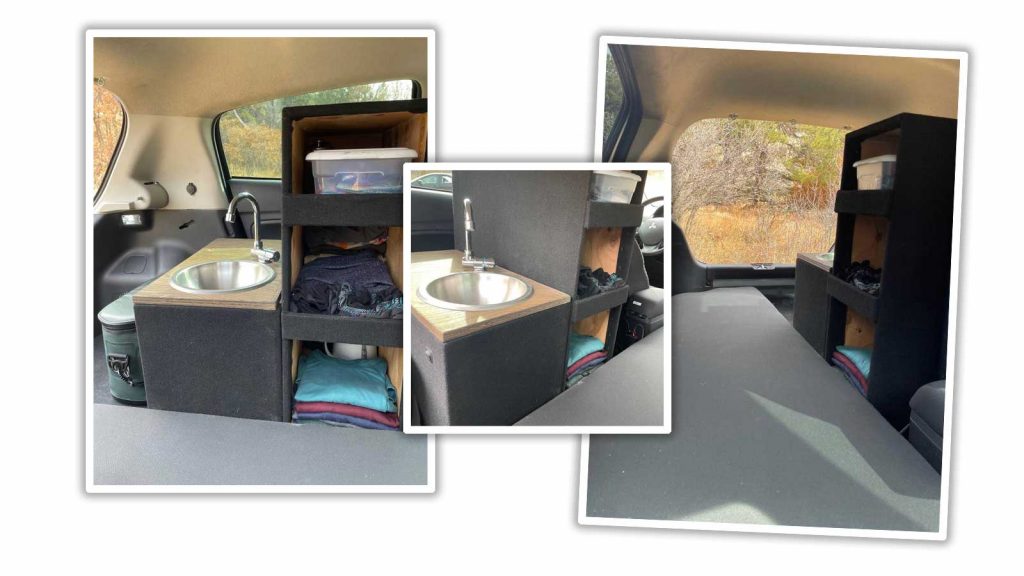 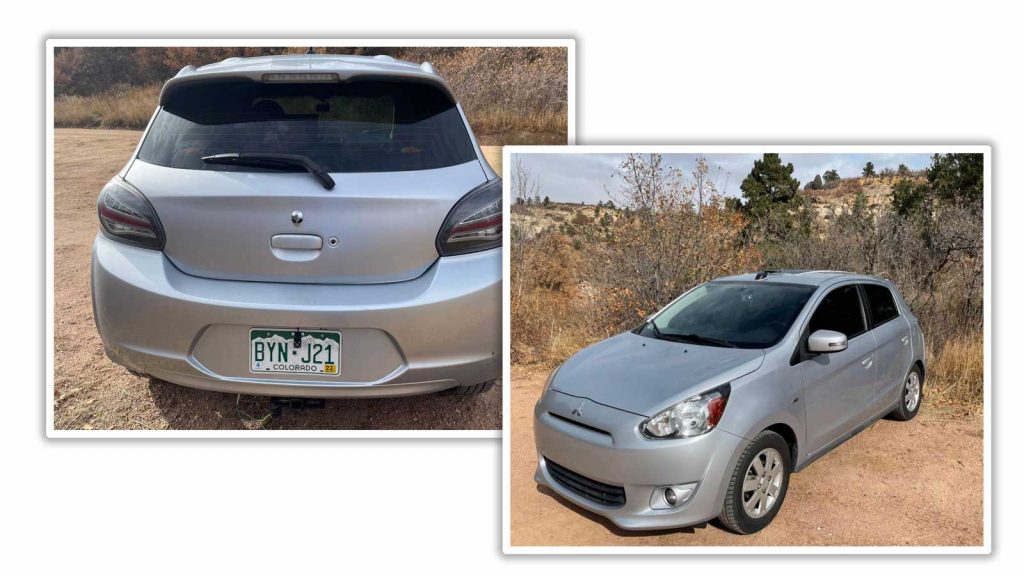 Regular readers might even remember the story of the Saab Toppola, a camper that fits into the area left when the hatchback is removed from a 900. There is sleeping space over the roof of the existing car. 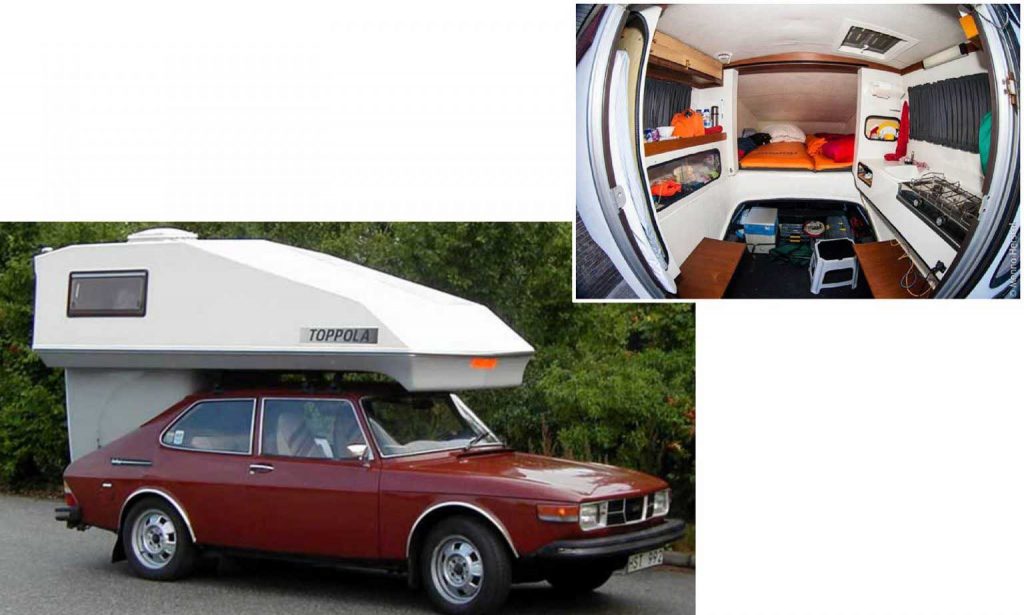 These cars had some curves to them, which does no favors to motorhome creation. This is thankfully not an issue with a car that is literally referred to unofficially as a ‘box.’ Let’s plan this thing out, which we might call our Scion Crappola Camper. 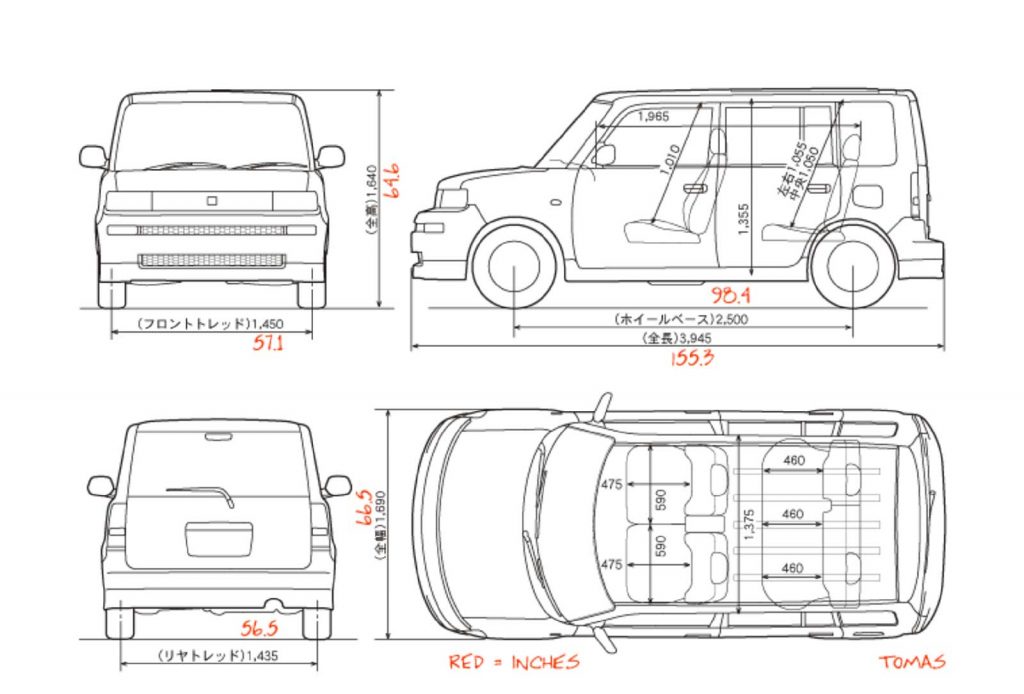 First, the rear hatch and back section of the roof has to go. Then, we’ll reinforce the precious structure that we’ve removed with some steel tubing (also weld the rear doors shut Dukes of Hazzard style). Also, we need to add some steel outside structure to create ‘ledges’ to accommodate the extra width of the new top in back (you’ll see) since the roof of the Scion is only around four feet wide at the top. We’d also need to fill these ledges in with steel or plastic:

At this point, many homebuilders would grab some marine plywood or corrugated aluminum and start skinning the thing. Certainly that is the kind of build befitting a backyard conversion of a two decade old example of one of Toyota’s least expensive cars, right? However, we’re semi-trained professionals here and just can’t do that. This will be a janky build but what you might call a ‘Pro-Janky’ build, if such a thing exists. Instead of Home Depot’s finest wares, we’re gonna Frankenstein this thing out of automotive parts only so that it looks for the most part like a car and not like that moving ice fishing shack we reported on earlier. We’re actually in luck, since I’ve found some car parts that are within a quarter inch or so of the dimensions of Jason’s poor little box.

First, for the rear roof ‘bumpout’, we’ll use a fiberglass topper for a pickup truck. As luck would have it, the width of the 1989-1995 Toyota Hilux truck is virtually identical to the Scion (66.5 inches- which tells you how big vehicles have gotten today). The fiberglass will be pretty lightweight all things considered, which is likely a good thing considering that many of the very few original horses in the engine have disappeared over the years. 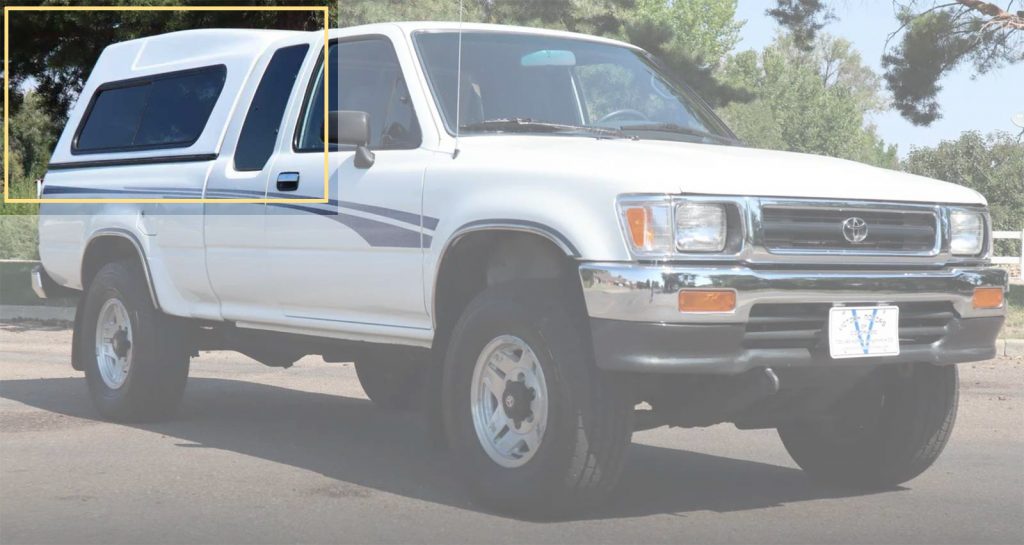 If you’re ambitious, you could go even wider at the top. The four foot opening created by cutting open the Scion roof is essentially the same dimensions as the width of a ‘stepside’ domestic truck bed, so the (rare) toppers for those (see below) will fit. However, it will give you an overall width almost a foot wider than the Scion, and I just couldn’t do that to the old girl (though the Saab Toppola extends pretty far over the sides).

We know that a blunt front end of a raised roof is an aerodynamic disaster, so we want to do more than just block the opening at the front of the pickup bed cover. I’d want something with a streamlined shape like on the top of a tractor trailer cab, as well as possibly some ventilation openings and even clearance lights or spotlamps.

Hey! What about a one-piece urethane front end of a junked car? I found one the exact width of the Scion (well, a quarter inch narrower) that also features headlights with partial covers for when not in use; just flip a switch under the dash and the ‘eyebrows’ raise up electrically to let you light up the whole campsite or forest. I found a perfect one on a compact model from this dead nameplate (WARNING- before you click here be aware that this song will be stuck in your head for at least the next hour). 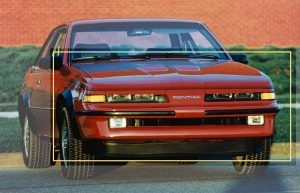 The resulting camper looks, well, as insane as you would expect. However, it could certainly be worse, and if you just had a blank front end (or had never seen a Sunbird Turbo in your life) then it might look surprisingly normal (or at least as ‘normal’ as a Toppola). 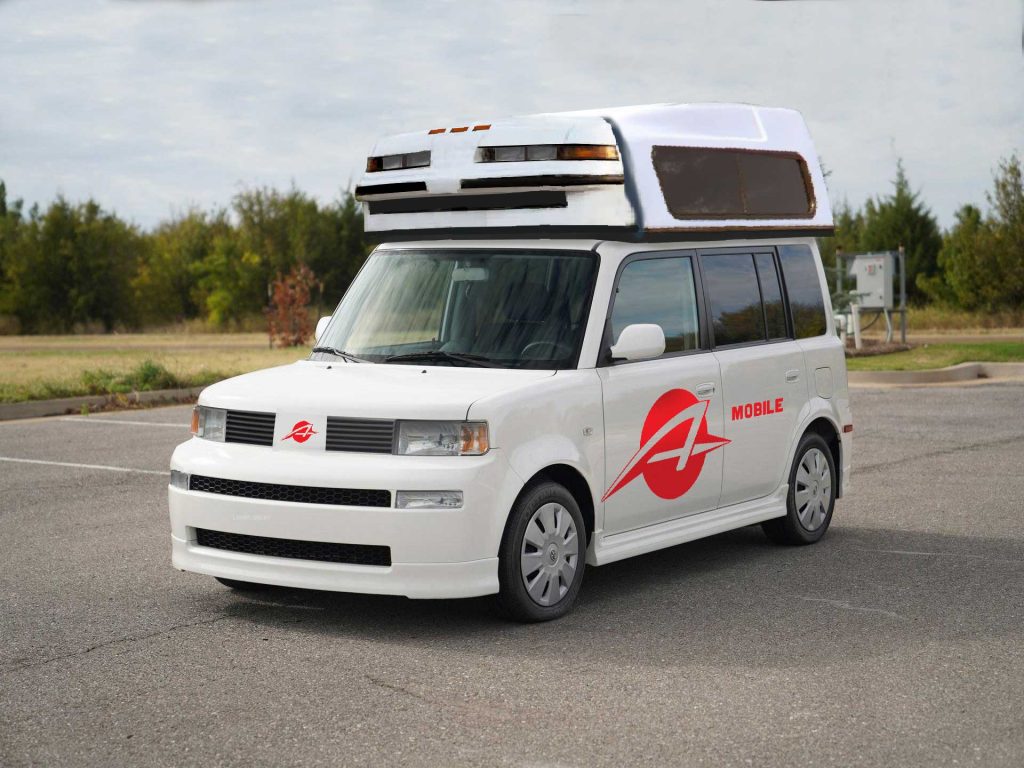 At the back, I thought about trashing the tailgate and topper rear window and just going the fill-the-gap-with-wood-or-something route. However, we said no jankyness, right? What I decided on was using the same Scion tailgate, but fabricate some hinges and add a latch so that it opens sideways. At that point, we might as well mount the spare tire there too and free up some additional interior space as well. 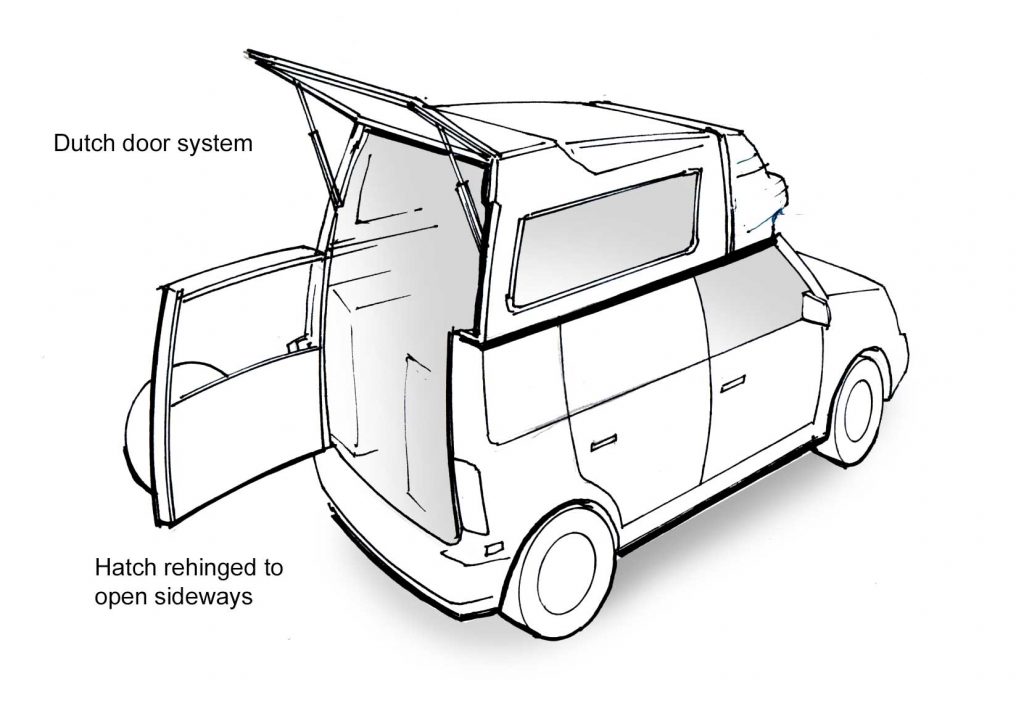 I was going to make a frame and attach the window that comes with the pickup topper to the lower door so it opens as one, and we could. However, I decided that maybe if it opened up in the original way it might be kind of cool; sort of like a ‘Dutch door’ on some old Chevy Astro vans. Plus you could close the lower door and let air in through the top. 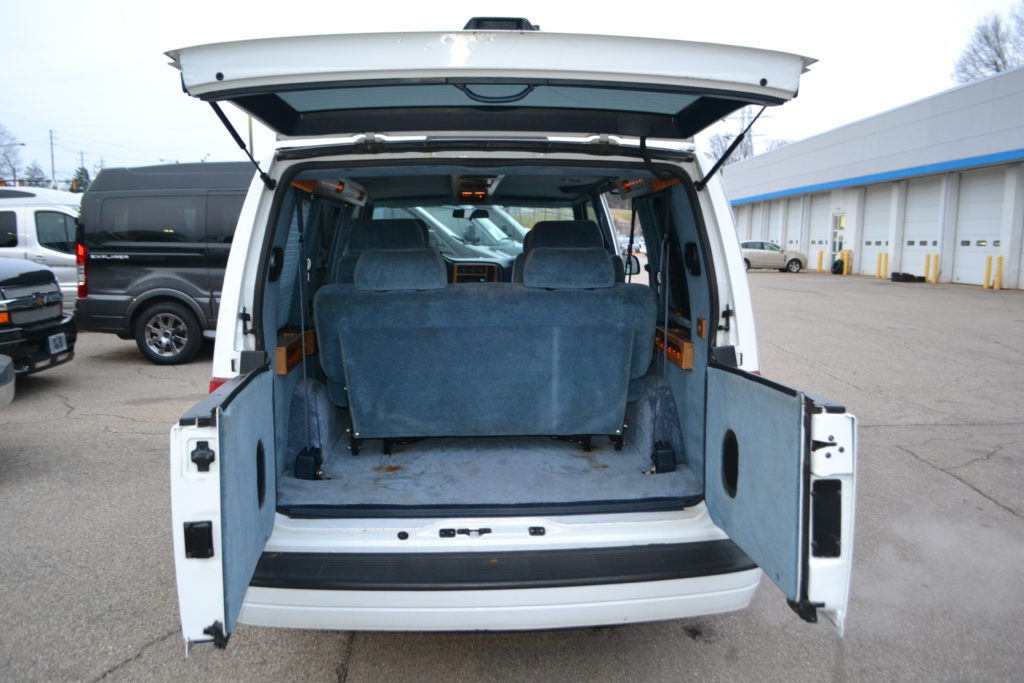 The interior space behind the front seats will be taller than what is in something like a Ford Transit Connect, but not necessarily walk around high unless you’re short of stature. We’ll fit in some tiny items for basic living like a small sink, cooktop, small seats and a table. There should be room for a tiny toilet, but unfortunately it has to be one of the chairs for the little table. Wait, did I just say that this is unfortunate? I mean, you could truly take a shit while working on your computer, even a conference call. Is that not living the fucking dream? The rear side windows will be blacked out for privacy (or covered in body colored vinyl). 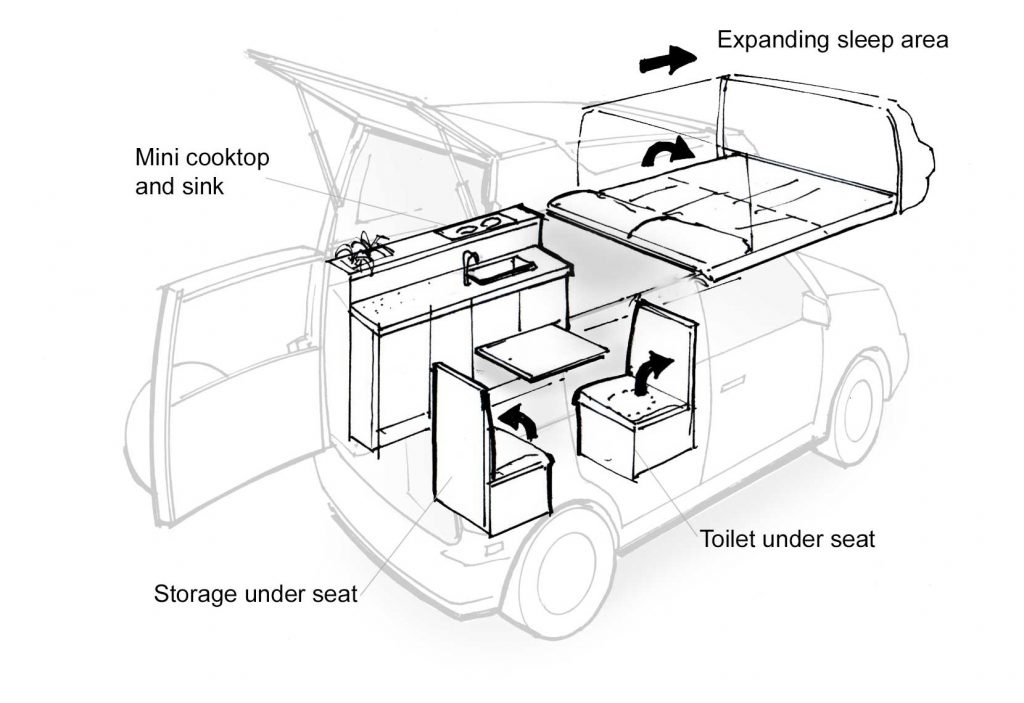 Like on the Toppola, the overhang of the topper allows for little ‘ledges’ on both sides of the camper to store things, create another level for the kitchen area, or even a spot for plants (we’d put a drain hole on that side to allow plant water not to settle).

Where is Jason gonna sleep? The Saab Toppola allows space over the passenger compartment, but the Scion won’t have enough space, unless you continued over the hood of the car with another structure. I really hate that look since it blocks your view of traffic lights and other sights. Here’s where we get tricky- the Sunbird nose slides forwards on telescopic tubes, with canvas filling the gap and a flat panel folding or sliding out to open the mattress onto. Now you have a regular sized bed for our hero to get some much-needed rest. 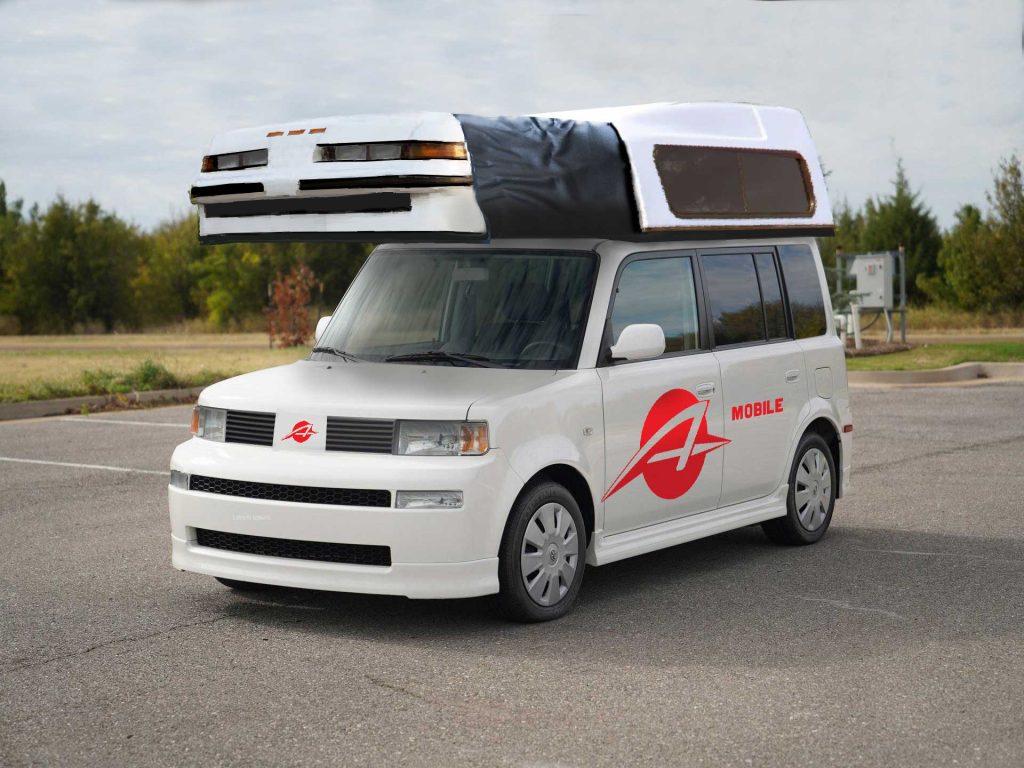 Still, it’s a very small space inside, looking like it might have been designed by big deal architect Frank Lloyd Wright, who infamously stated that anyone over six feet tall was ‘a waste of material’. But five-foot-seven Wright could have lived in here, if he were still alive and kinda down on his luck.

Yes, it’s a bit of a cobbled-together joke, but it sort of works. There’s nothing that aerospace engineering rejects couldn’t make real here, and the brave little Ex Bee deserves a second life.

Read All My Posts »
PrevPreviousWhat Car Stuff Did You Get For The Holidays?
NextWatch The Hybrid 2024 Corvette E-Ray Get Sideways In The Snow And Pretend You’re ThereNext