This week started off with a simple idea. My wife needed to be in Los Angeles for business, so I figured I’d tag along, rent us a cool car, and turn a boring business trip into an impromptu honeymoon. As I sit here stranded in California, I’m reminded that somehow, the only thing that went right was the honeymoon portion. Even renting from Turo was way harder than it needed to be, and not really any cheaper than getting a car from the airport. But the car we got was way cooler than an airport car.

And with me stuck in California a little longer than anticipated, I’m glad it’s here to keep me entertained.

Let me start with how I got here. As I type this, I’m sitting in an uncomfortable chair in a cheap hotel in Ontario, California. Had everything gone right, I’d actually be brewing you a Mercedes’ Marketplace Madness from the comfort of my apartment with a cute bird on my shoulder. A blizzard and other storms are rolling across much of the country, destroying infrastructure and wrecking transportation in its path. Looking at my security camera, there isn’t much snow on the ground at home. However, wind speeds are sustained 25 mph to 35 mph with gusts into 50 mph. Check out this photo from the National Weather Service Forecast Office in Chicago. Brrr! And temperatures have fallen below zero degrees Fahrenheit. Both of Chicago’s major international airports have essentially shuttered for Thursday with little activity happening on Friday. Thus, I’m stuck in California until Saturday. I’ve been stuck in far worse places, but sadly, I will miss my family’s holiday gathering.

I wish I could say that this was the only thing that went wrong, but things got sideways before our plane even departed on Tuesday. As I wrote earlier this week, I planned on giving the peer-to-peer car rental platform Turo a try.

The appeal of Turo is that rental rates appear low and you can rent far cooler vehicles than you could get at an airport rental counter. Forget about a Dodge Challenger with a V6 when you can get things like a Vanderhall Venice, a Chevy Corvette C8, or all kinds of Teslas—especially in Los Angeles, home to amazing, rust-free rides.

Heck, I even saw someone renting out mint condition Reagan-Era American cars if that’s your kind of jam.

The first problem arose when our trip changed at the last minute. The cheapest airfare that we found (by hundreds of dollars) required us to fly on Frontier from Chicago’s Midway International Airport to the Ontario International Airport in California. We’d then get a ride into Los Angeles, where we’d pick one of the fantastic cars there. Unfortunately, our ride was canceled, meaning we wouldn’t have a cheap way to get to Los Angeles. And it was far too late to change our flight. So, I changed my location on Turo to the area around Ontario, California. There were far fewer vehicle choices, and none of them were our top picks.

At first, Sheryl and I landed on renting a C7 Corvette convertible. I’d get my open-top experience, my first time in a Corvette, and Sheryl would get to experience a V8 American car just as she likes. It was with this car that I discovered the first oddity with Turo.

When you choose a car, the site gives you an estimated total cost. For this Corvette, it was $75 a day, adding up to $150 for our two-day rental. It was then another $120 to deliver it to the airport. The estimated total was $270. Great! But when it came time to submit the reservation, Turo added on a “Trip Fee” to make the total $450. I get that estimates are just that, but the difference between the estimate and the actual cost here was huge. So, we passed on the Corvette.

I spent what felt like a few hours trying to get the app to give me cool cars near the airport, but I kept getting stuff like a Toyota Camry or a Nissan Altima. Eventually, I did find a 2018 Dodge Charger SRT 392 and a 2016 Volkswagen Golf GTI SE

The Charger seemed like more of Sheryl’s speed, while the GTI was mine. But as it turned out, Sheryl was actually way more interested in the GTI than I expected, and she told me to lock it in.

The price was far more reasonable, too. It was $52 a day with an estimated trip total of $157. When Turo added its fees and surcharges the car was $210. Add in the insurance and it was $230. Perfect! I locked it in and got excited about our trip. 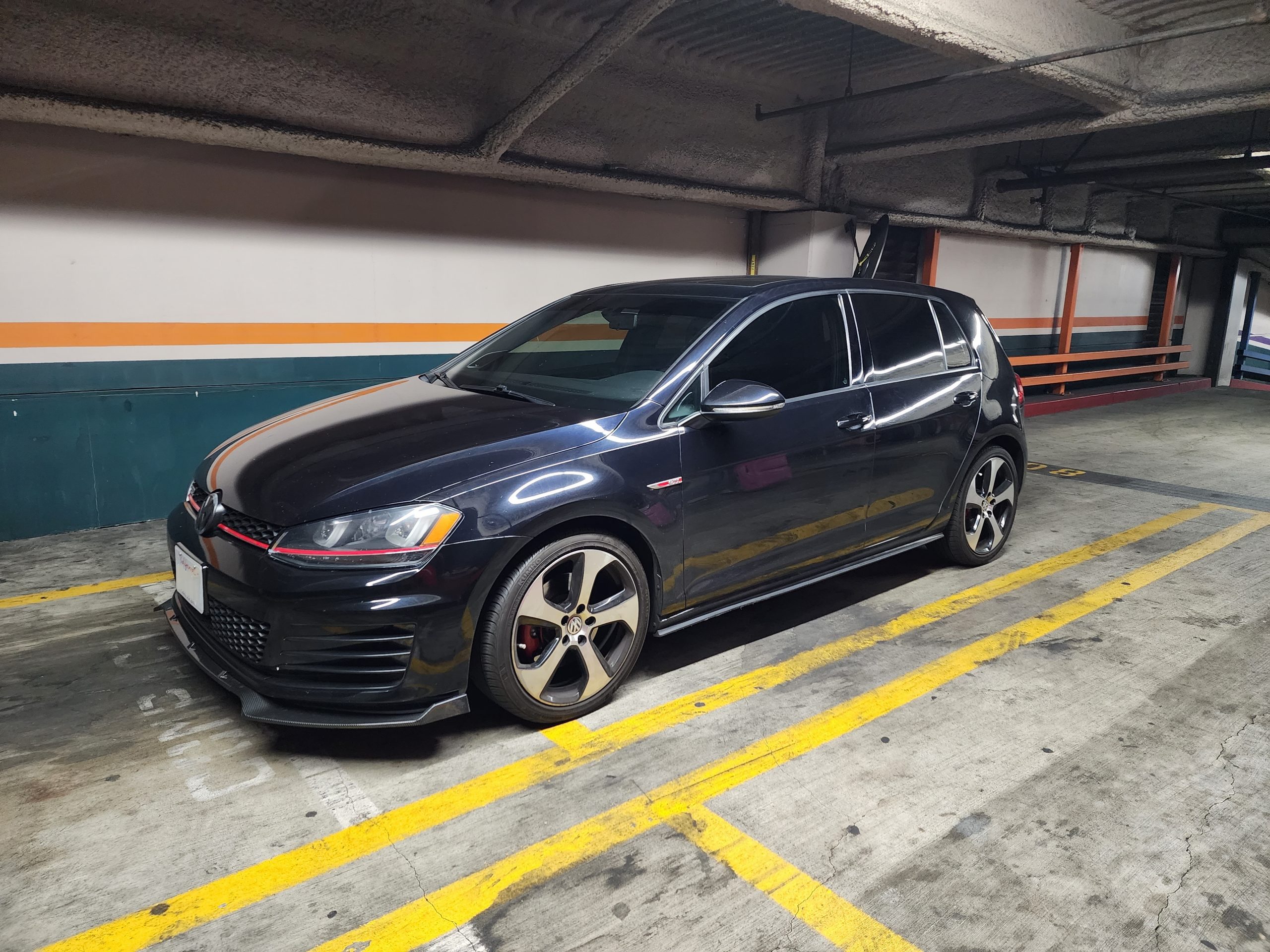 Then disaster struck. Just minutes before our flight was due to start boarding, I received a concerning message from Turo saying that I was unable to book on the platform. This baffled me.

I did all of the verification steps and made sure that my account read as approved for days before I even tried to book the car. I even did the small stuff like connecting my Facebook account and writing a lengthy bio. And it seemed that my booking went through, so what happened?

Reading that email, it said that Turo pulled my “auto insurance score” from TransUnion, a credit reporting agency. Wait, what? What is an auto insurance score and how the heck is TransUnion even involved? And what about my driving record? I first went to Turo’s help pages for an explanation, and here is what I got:

An auto insurance score (AIS) assigns a level of insurance risk to each individual. In other words, it tells us how likely it is that you’ll file a claim. Turo considers AIS when evaluating new guests in the US and Canada. Doing so helps us keep our platform safe and affordable for everyone. We receive AIS from the credit reporting agency TransUnion. TransUnion uses some elements of your credit report to come up with your AIS, which is not the same as a credit score. You can learn more about AIS.

This only raised more questions. I’ve been driving for over 15 years. And in that time, I’ve filed exactly zero insurance claims. I’m also usually loyal to my insurer and stick with it for years. It’s been four or five years since my last ticket, and my insurance rates aren’t super low, but they aren’t high, either. I have one motorcycle accident on record, but I wasn’t at fault and my vehicle wasn’t damaged. Perhaps I’m wrong, but I’d think that never filing an insurance claim in over 15 years should mean that I’m unlikely to file a claim.

The credit reporting agency cites a 2003 University of Texas study that looks at auto insurance data and credit data and concludes that people with lower credit scores are more likely to incur a loss, and for that loss to be more expensive than a loss incurred by someone with a higher credit score. So, TransUnion and Turo want to say that my credit report is more likely to determine if I’ll file a claim than my over 15 years of never filing a claim. Ok, sure.

I also looked up how companies even come up with an auto insurance score, and it seems that the factors aren’t even related to driving at all. According to Forbes, your insurance score is determined similarly to your credit score. I’ve long paid off my Smarts, don’t have credit cards, don’t really have credit accounts, and pay cash for everything. Basically, I’ve done the opposite of what experts say to do to have good credit. But apparently, this means that I’m at risk of crashing a car soon.

I reached out to Turo for more information, as well as for methods to potentially appeal its decision. So a representative told me, the appeal process is not a quick one. You first have to dispute your score with TransUnion, and if TransUnion gives you a better result, you then give that to Turo. And that will take days.

As a shot in the dark, I asked Sheryl to give it a try. Her driving record has a handful of crashes and insurance claims on it. But it seems Turo doesn’t actually care if you have a rough driving record—just that your credit is good enough. Sure enough, she was approved and was able to carry through the vehicle rental from start to finish. And oddly, the app allowed her to add me as a secondary driver. 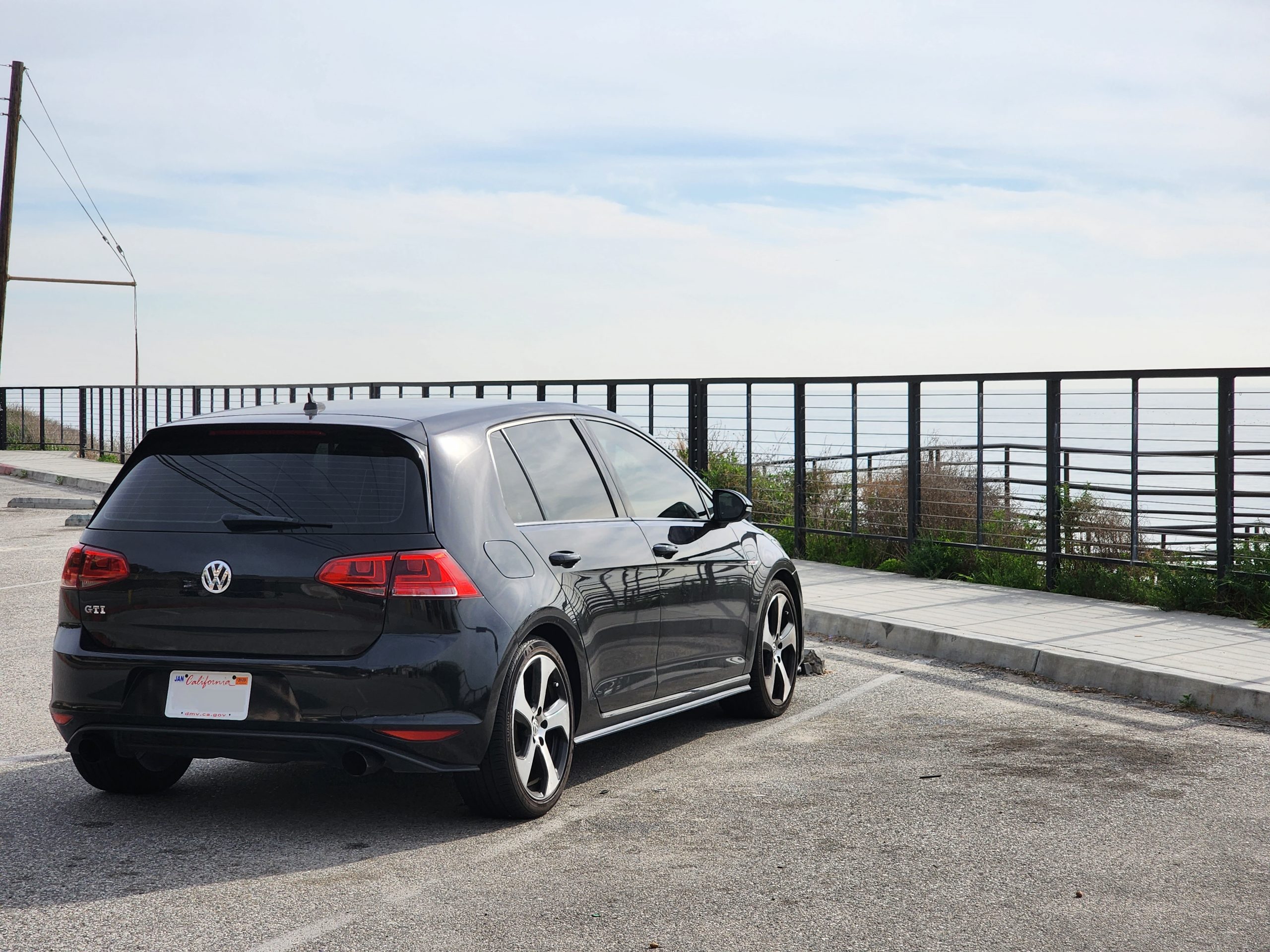 I wasn’t about to question it, but it legitimately made my head hurt. Maybe the platform is just broken because none of this makes any sense to me. And now with the rental done, Turo is, for now, useless for me. I can look at cars and become a Turo Host, but I cannot rent a vehicle from the platform.

In contrast, I can walk up to Enterprise and come out with a car, something that I’ve done a number of times without problems, including earlier this year. I was hoping for Turo to be the killer app for fun cars and a better experience than the airport rental counter. But at least for me, it’s not quite there just yet. The cars are far cooler, and it’s nice to be able to do everything through an app, but I spent far more time worrying about just getting a car from Turo than I would have spent standing in line at Enterprise. And Turo’s seemingly arbitrary Trip Fee also detracts from the experience. Turo says that it can charge up to 100 percent of your estimated Trip Price as an additional Trip fee, meaning that you could easily pay double the estimated price.

As far as the Volkswagen GTI goes, I’m going to have a story on this awesome vehicle soon. 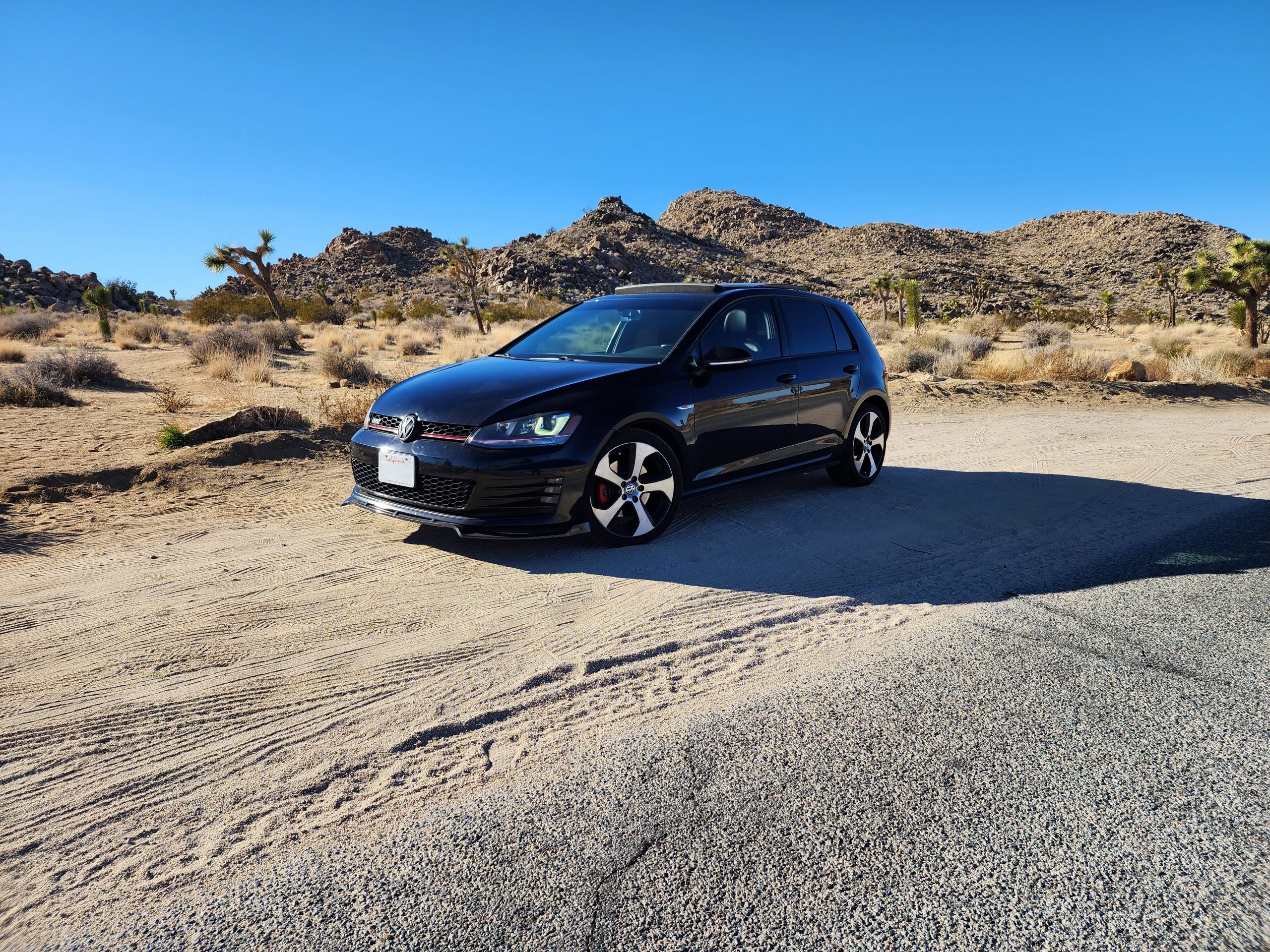 But I will say that getting this car and the excellent host made the Turo problems feel not so bad, and it made our mini honeymoon so much more fun. I’m not sure I’ve ever driven a vehicle that fits the definition of “all-rounder” better than a GTI.

It’s more than fast enough to put a smile on your face, but it’s also still a practical hatchback that gets decent fuel economy. I’ve long enjoyed stories about the GTI from a distance, but finally, I’ve gotten to experience it for myself. And it’s as good as the stories make it sound.

Take this story as a word of caution. If you’re the kind of person who pays cash for everything, or maybe you’ve made some mistakes and your credit isn’t hot, you might not be able to try out your dream car on Turo.

And that honestly sucks, because as our readers have pointed out, Turo is pretty much the only place where many regular people will be able to touch their dream cars. But the credit-related stuff, and fees that can literally double your estimated cost, mean that in some cases renting a V6 Challenger from the airport is a better choice.

Which Silly Car Should I Rent From Turo In Los Angeles This Week?

Mercedes is a lifelong fan of all things powered by an engine. When she isn't driving one of her five Smart Fortwos or her 14 other vehicles she could be found in the cockpit of a Cessna 172 or perhaps swimming in any body of water that she could find. She also has a deep love for buses of all kinds. Please send her buses. mercedes@theautopian.com Instagram: @mistymotors Twitter: @Miss_Mercedes30 Facebook.com/neonspinnazz
Read All My Posts »
PrevPreviousThe Lancia Fulvia Concept Was Too Good For This World
NextA Gun That Shoots Cars, Punchcard-Controlled Cars, And Tiny Gas-Powered Toy Cars: Weird Commercials Of Toys PastNext