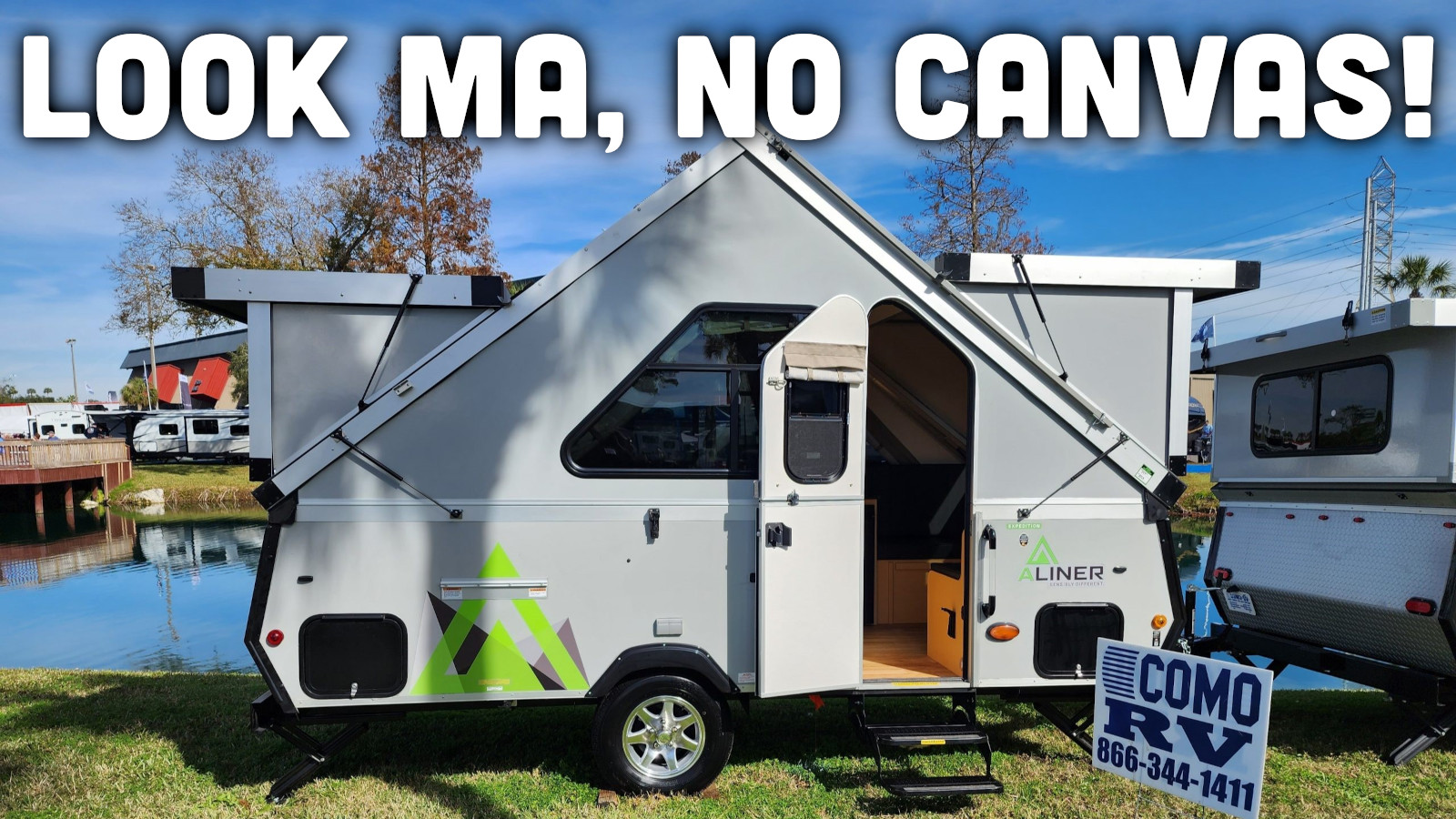 I’m always on the lookout for a small camper that could be towed by a wide variety of vehicles. Not everyone has or wants a big pickup to haul a camper. Often, going really small means getting what’s more or less a tent on wheels. At the 2023 Florida RV SuperShow I found what appears to be the best of both worlds. Aliner campers are light and compact for towing like a pop-up tent camper but blow up into a nice living space with hard walls to keep you in and wildlife out.

Last week, I attended one of America’s largest RV shows in Tampa, Florida. While there, I found myself surrounded by mammoth coaches and colossal travel trailers. Those rigs were great, but I couldn’t help but think about the countless crossovers out there that won’t even come close to hauling one of those beasts. RV manufacturers haven’t forgotten about the other end of the market, and small campers made a splash. 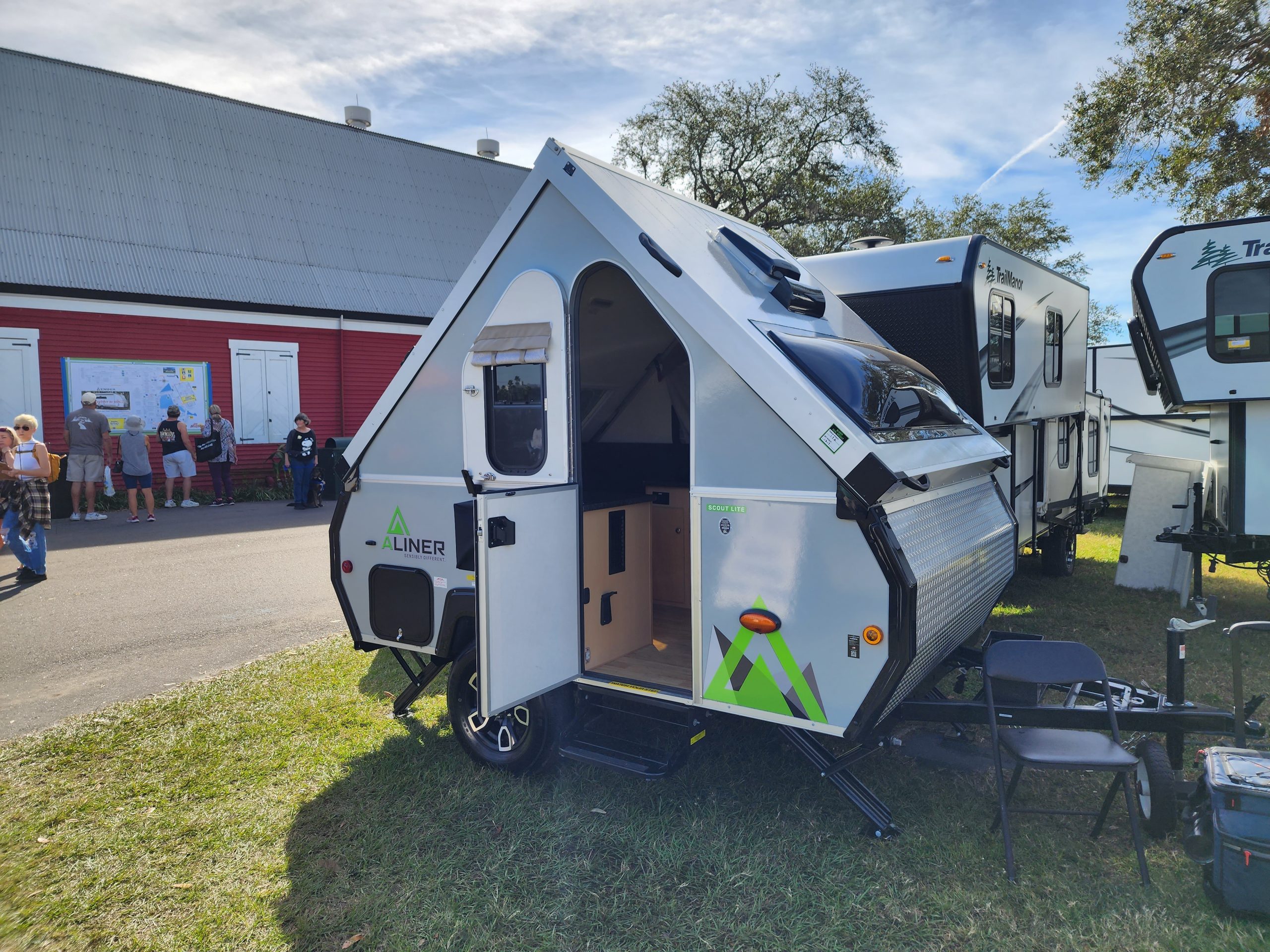 Unlike a lot of the newer campers that I feature here on The Autopian, Aliner isn’t a startup company. If you go to campgrounds as frequently as I do, you’ve probably seen Aliners before. I’ve often found myself captivated by these campers’ A-frame, but haven’t actually taken a tour of one until now.

Aliner’s history is a short one. Back in the early 1970s, Ralph Tait decided that he wanted to design a new camper. Working out of his garage in Bend, Oregon, he spent several weeks crafting what would become his first A-frame camper. The resulting travel trailer was like a more traditional pop-up camper, but different in one key area. While a traditional pop-up opens up into a sort of tent on wheels, Tait’s camper has hard walls. Apparently, people loved his camper enough to request their own, and eventually, Tait decided to make it into a business.

Tait’s family moved to Pennsylvania, where Ralph and his brother built the campers. A third brother hitched a completed camper up to a station wagon and drove around the country until the camper sold. Aliner says it’s been producing the campers in Pennsylvania since 1982. The Taits retired in 2007, but the company still builds the A-frame campers that you’ve probably seen on the road.

Pop-up tent campers are really cool. These things can be found for dirt cheap and can be a nice little basecamp at a racetrack or local campground.

However, they do have some notable downsides. The biggest, I think, is one that’s shared with a regular tent. Pop-up tent campers, like a regular tent, largely separate you from the outdoors with canvas. That means you’re getting little in the way of sound and temperature insulation.

There’s also the safety element, as tent campers don’t offer much protection from bears or some jerk with a knife. Because of this, you may find a campground where a pop-up tent camper isn’t allowed. A campground at Yellowstone National Park is one of those places. These are the problems that an Aliner seeks to fix. It starts with the Classic, the A-frame camper that Aliner says started the whole company. 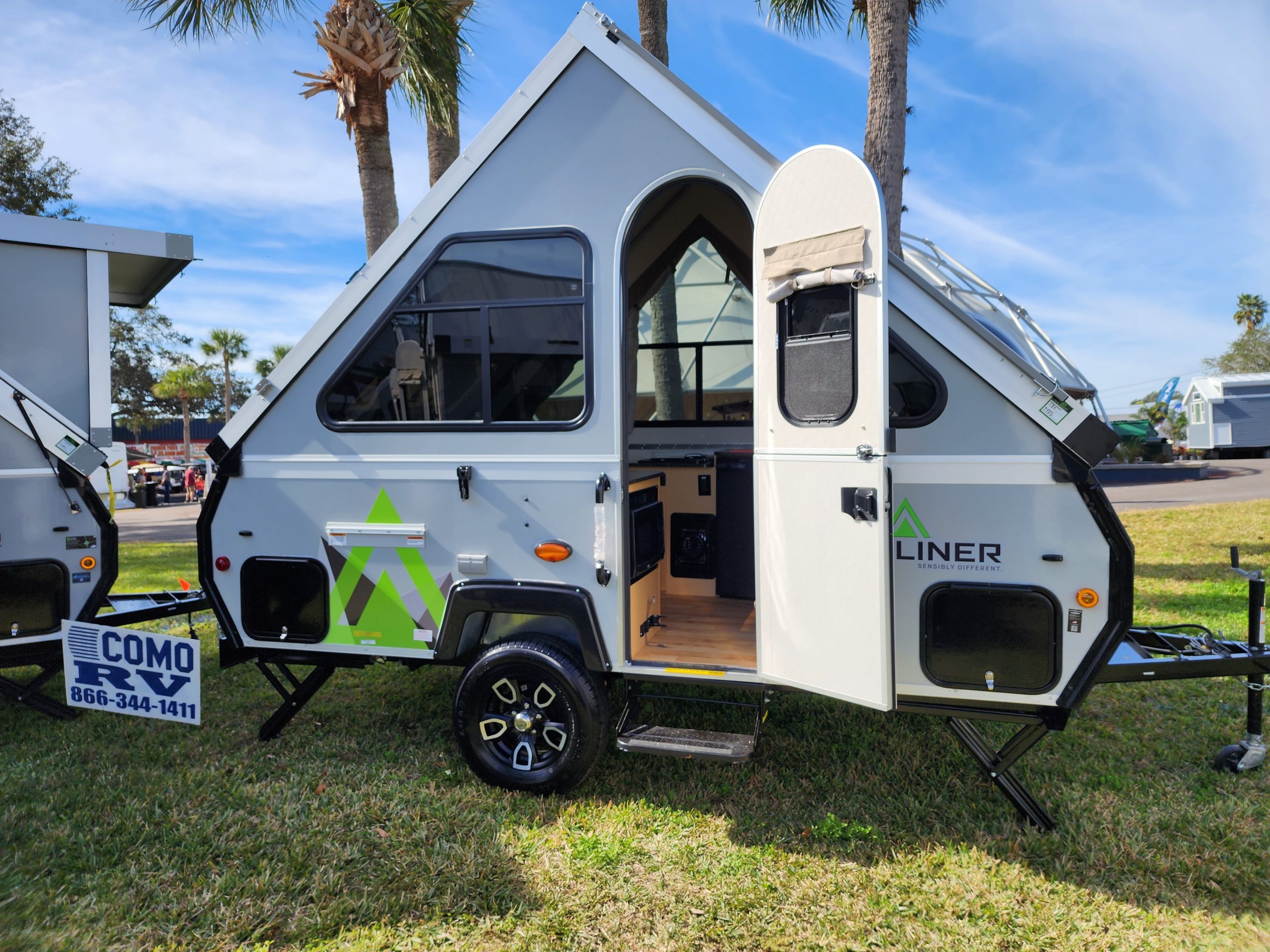 Aliner says its other camper designs are just variations on this trailer. It’s 15 feet long, 1,725 pounds empty, and costs roughly $29,000. I say “roughly” because the advertised price that I got came from a dealership. Aliner’s site does not list pricing. Even though the list price may be that high, it doesn’t seem likely that you’ll pay that price. The Aliner dealer at the show was offering $4,000 and $7,000 off its own pricing, and you can find brand new examples for similarly “discounted” pricing.

I do wish the pricing were a bit more transparent in the RV world. You can walk into a Ford dealership knowing the MSRP of an F-150, but the same isn’t always the case in the RV industry. 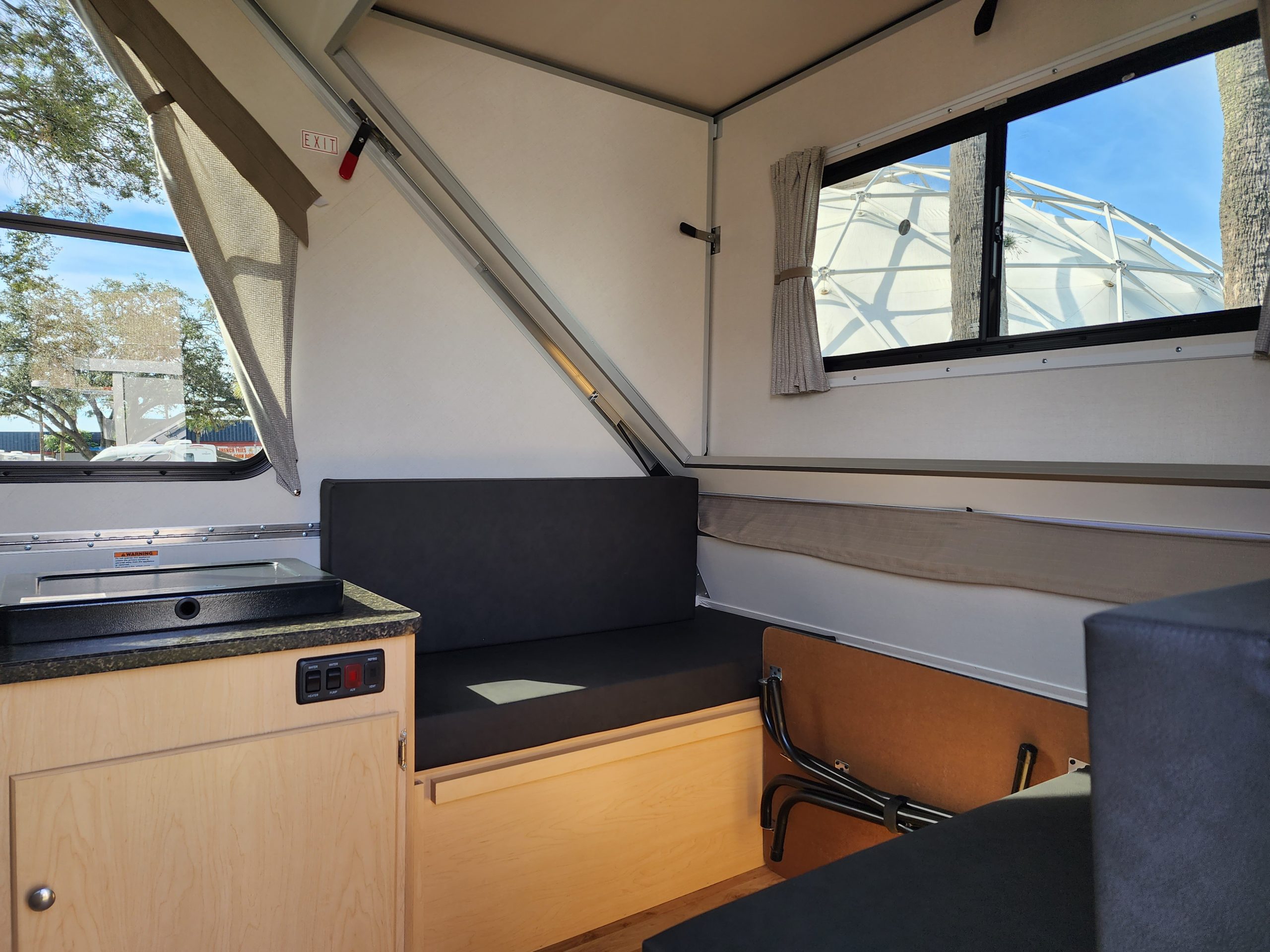 Anyway, Aliner campers net you walls and a roof consisting of a sandwich of vacuum-bonded fiberglass with a polystyrene core. Inside, the wall and ceiling panels are made from Azdel thermoplastic composite. Aliner says that these materials provide strength and insulation. Aliner boasts a setup time of under a minute and while I didn’t get to test that for myself, this video suggests that the claim is likely true.

Once set up, you get a genuinely nice living space. I toured all of the Aliners that were at the show and the company appears to be telling the truth when it says its campers are all variations of the same thing.

The company offers a variety of options, but otherwise, you’re getting the same experience but in different lengths and weights. 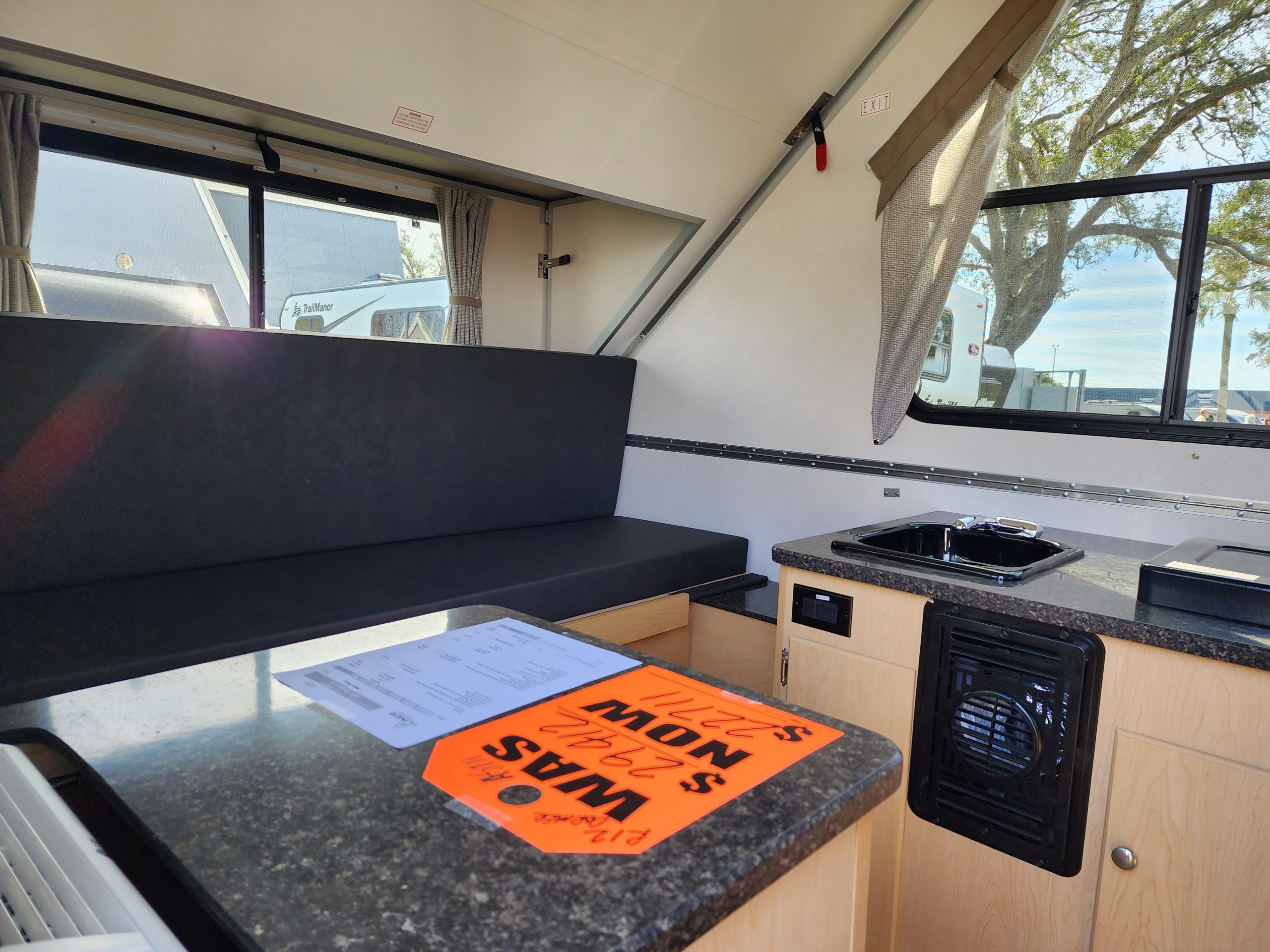 Standard equipment for an Aliner Classic includes a sink, microwave, air-conditioner, heat pump, propane tanks, and even struts to help with opening the camper in high winds. There are even 11 gallons of fresh water, a water heater, and a kitchenette onboard. Basically, these come with almost everything that you need for a camping getaway, but in a package that folds in on itself. You do get an outside shower as well.

There isn’t a toilet, but that can be solved with the addition of a portable toilet or moving up to a higher trim level that has a bathroom. Options include expanding the unit with pop-out dormers and an off-road package that adds a heavier-duty axle and off-road tires. Aliner sells these in different trim levels including the LXE, Ranger 12, and Scout. They’re all largely the same, but with different equipment

From there, really you just scale up or down depending on your needs. Aliners get as small as the 13-foot Scout-Lite, which weighs just 1,180 pounds.

That’s about as tiny as a fiberglass camper! Going this small does mean losing out on the kitchenette, outdoor shower, and water heater. The air-conditioner and heat pump also become options here. 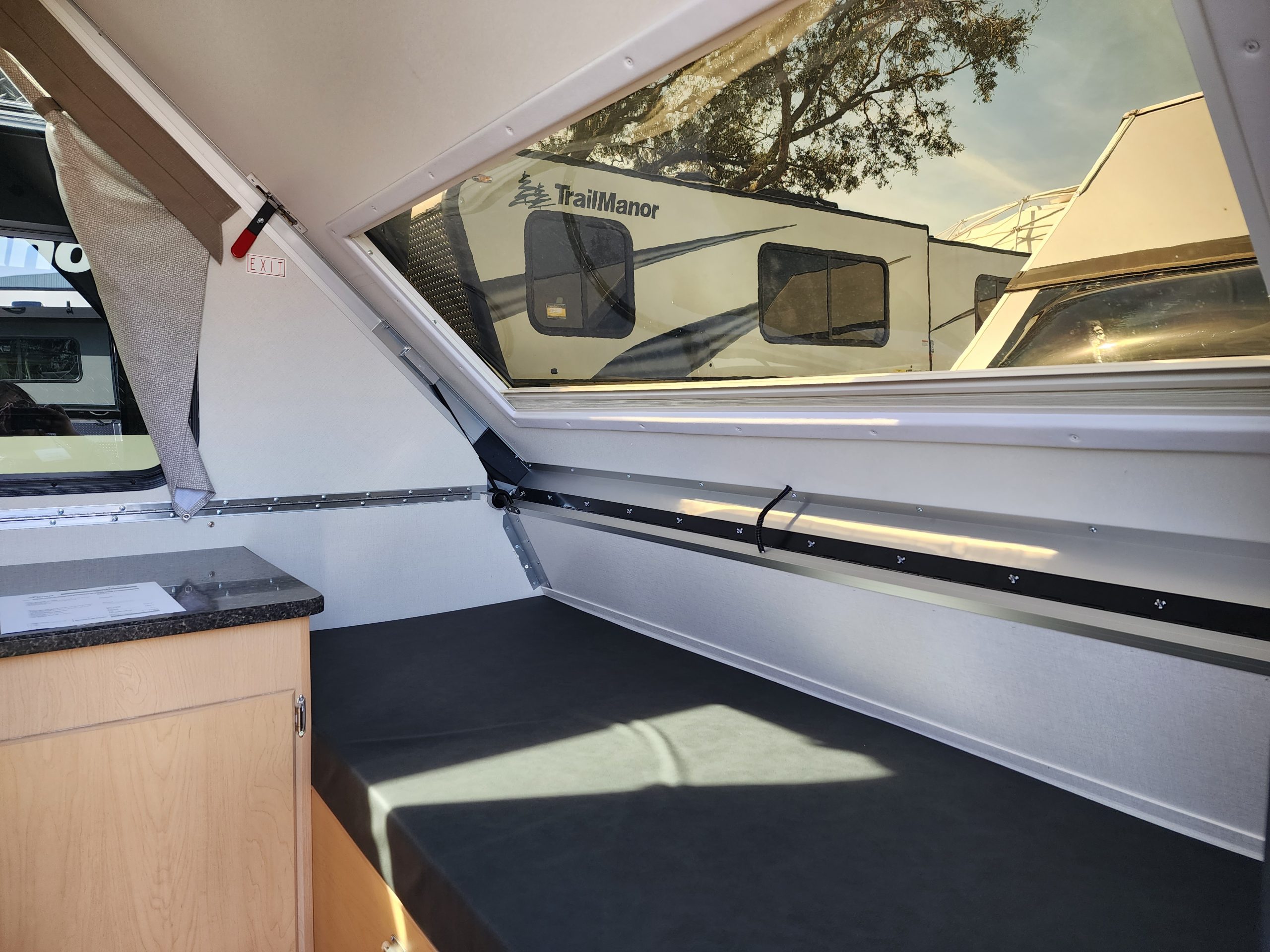 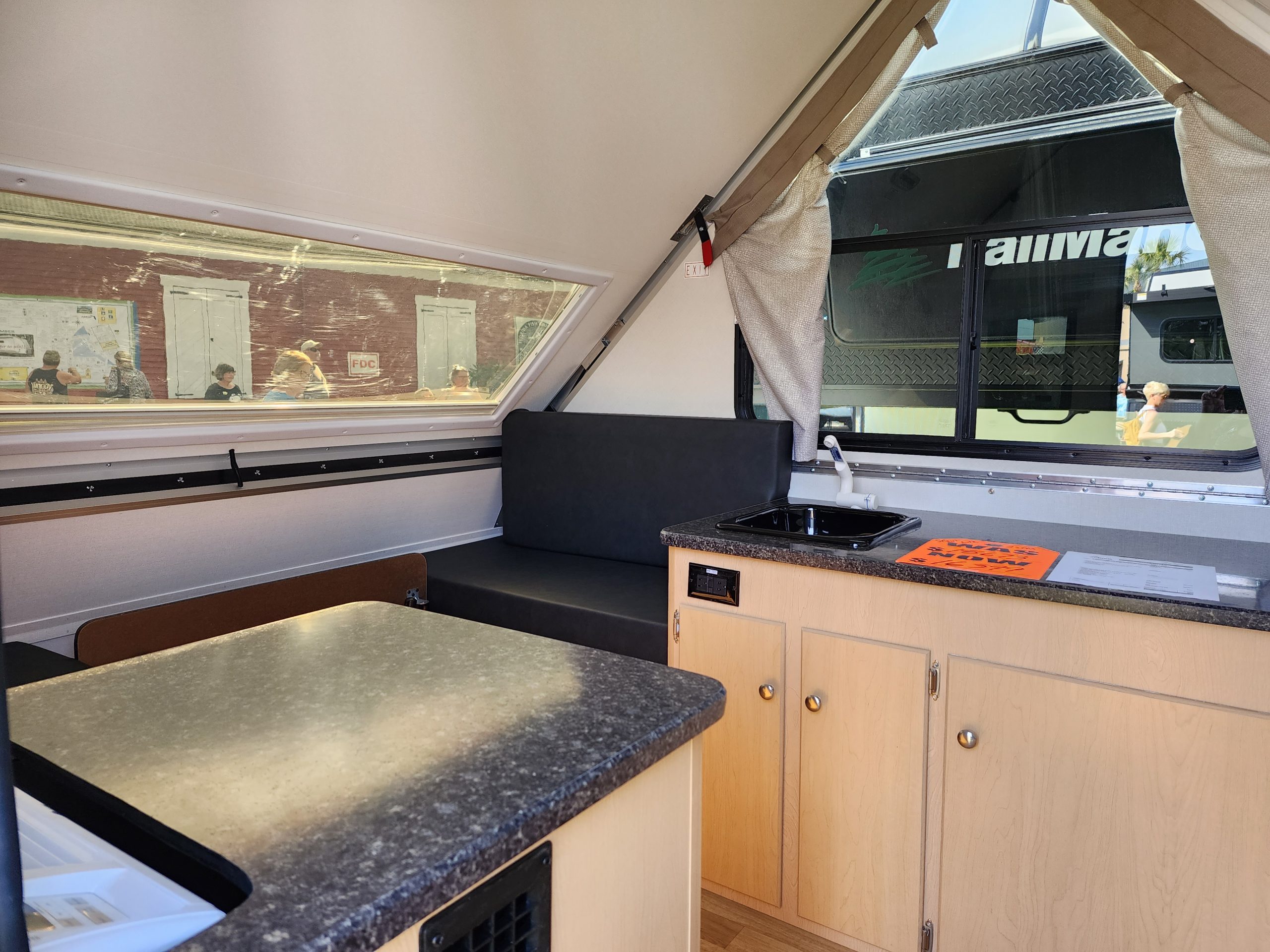 At the other end of the spectrum, we have Aliners like the Evolution, Family, and the Expedition. 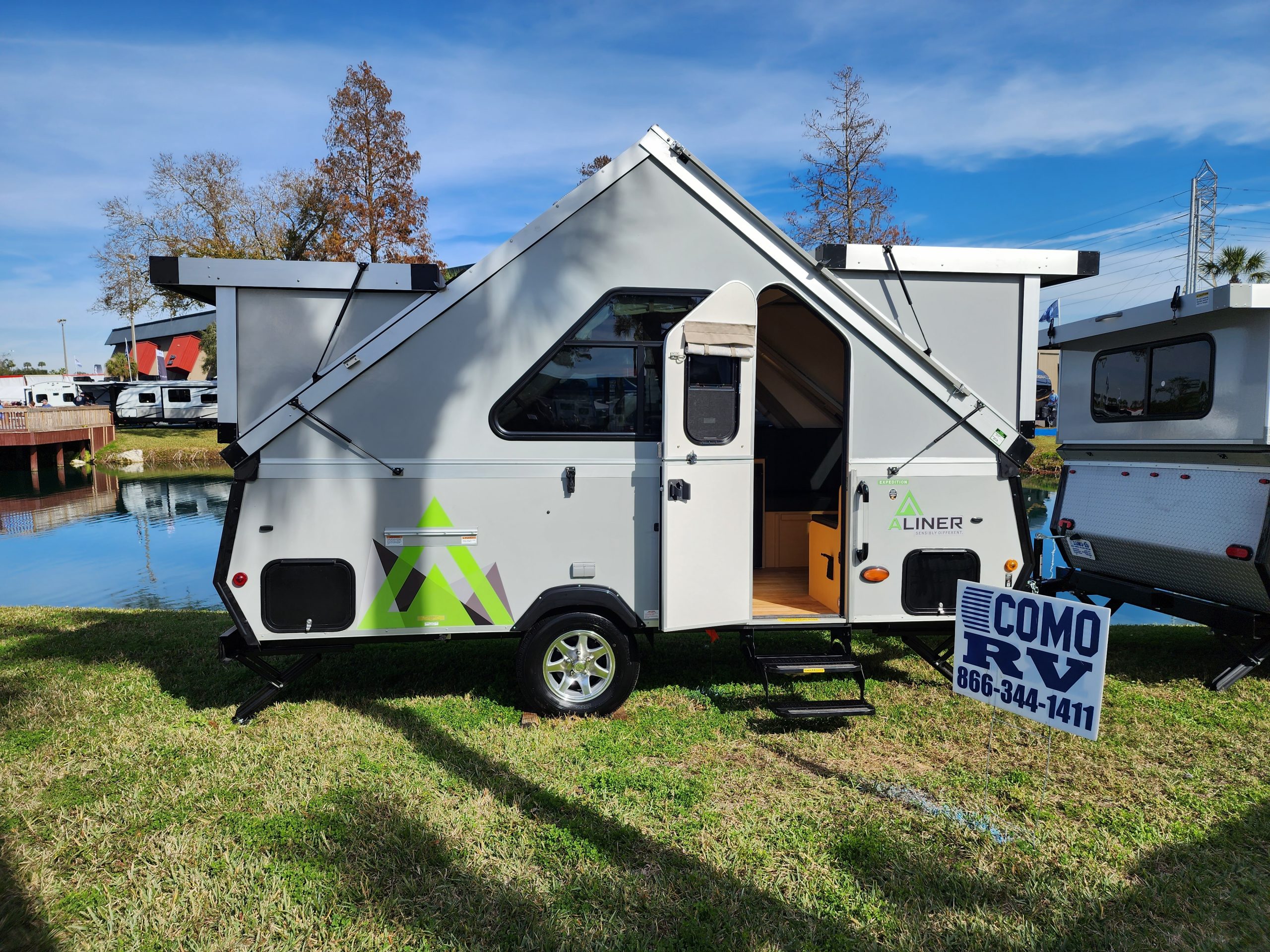 These come in at 18-feet-long and the extra length nets you some additional equipment like an internal bathroom and more sleeping berths. The highlight here is the Evolution, which is advertised as having aluminum-framed cabinetry and furniture, plus two queen-size beds and 185 Watts of solar right from the factory. 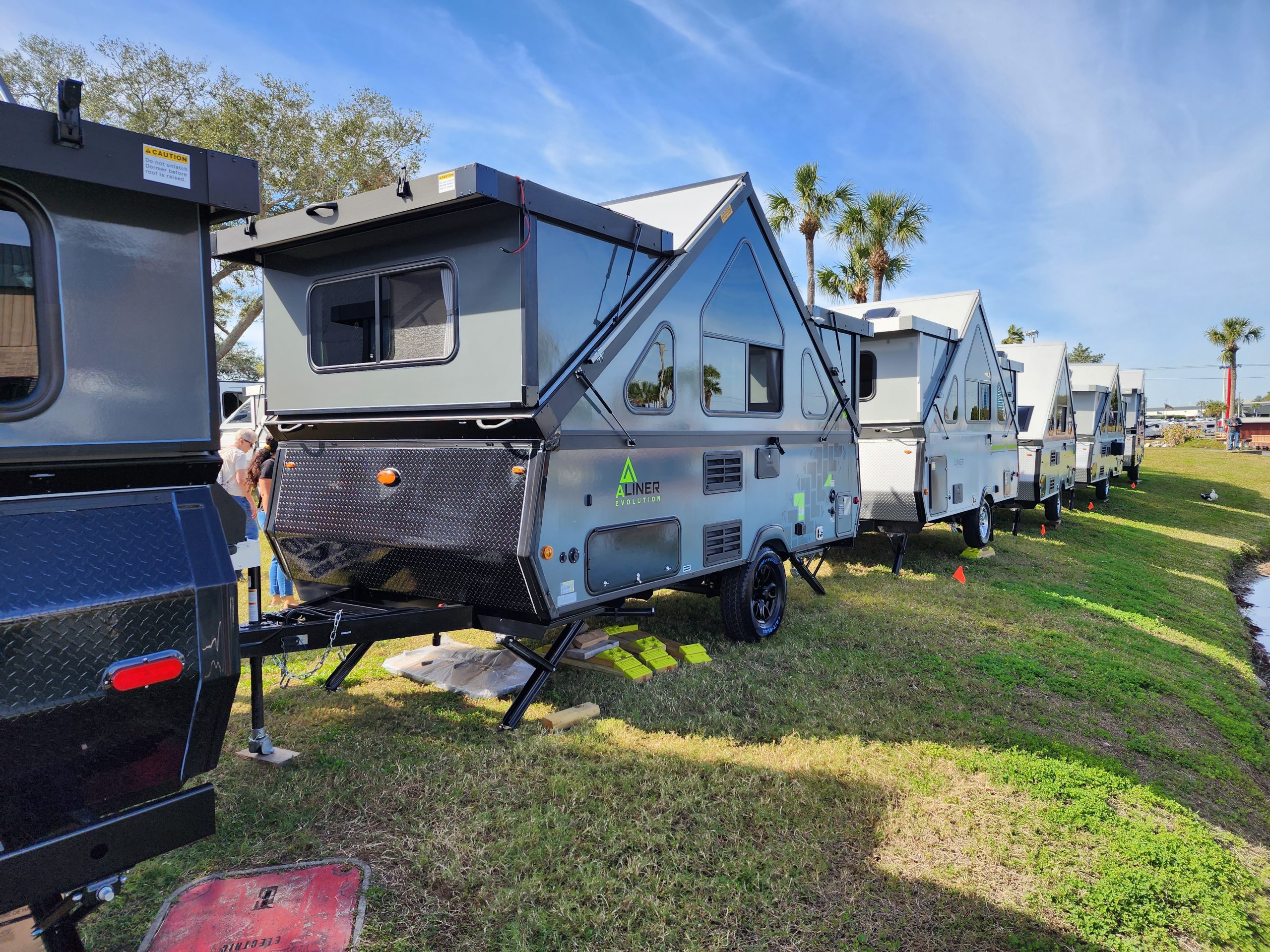 I’m told that these larger units start around $39,000 before discounts. These larger ones weigh from 1,850 pounds to about 2,300 pounds depending on the equipment.

After spending a lot of time playing around with and feeling up these campers, they seem to be built pretty well. 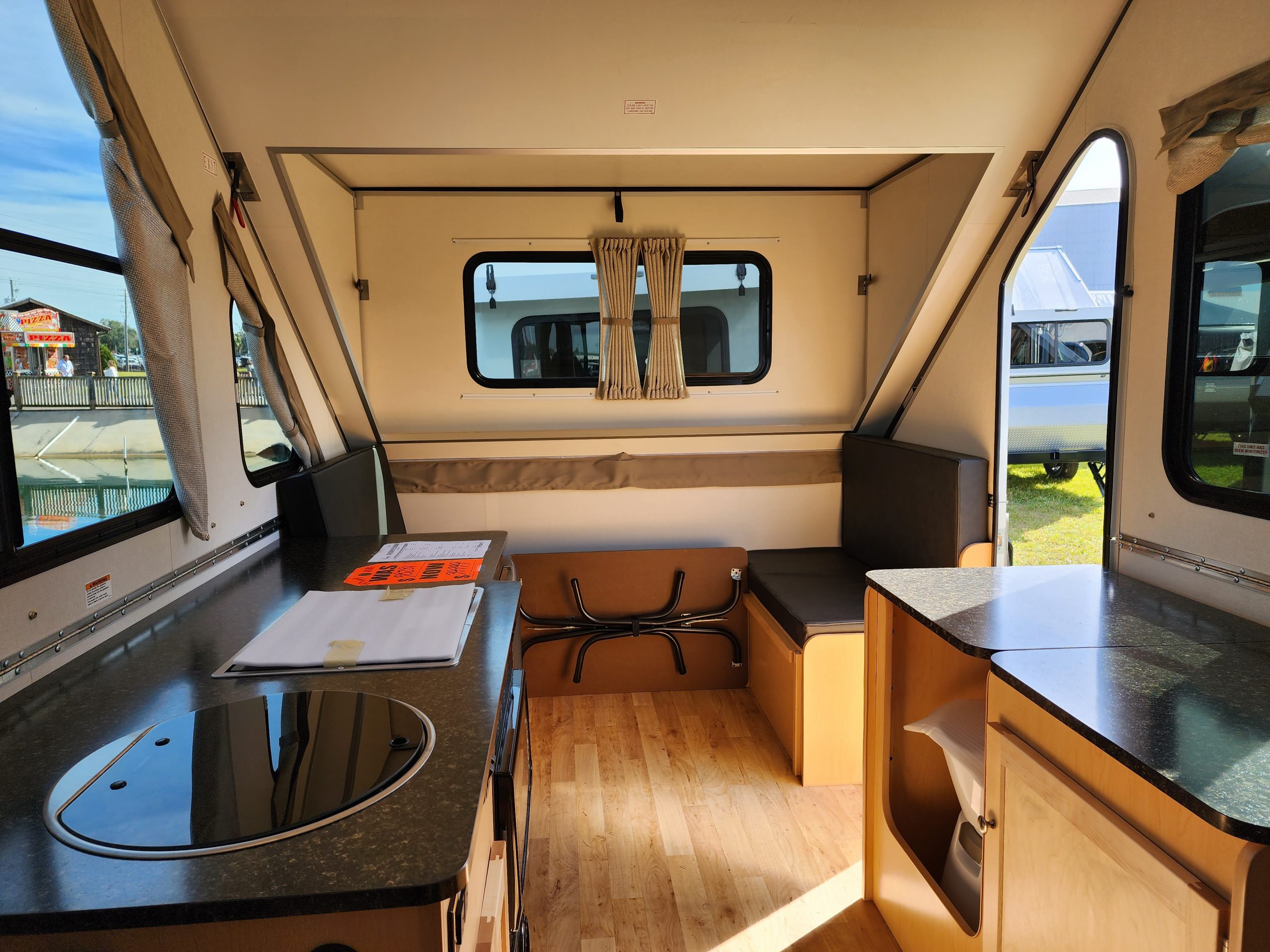 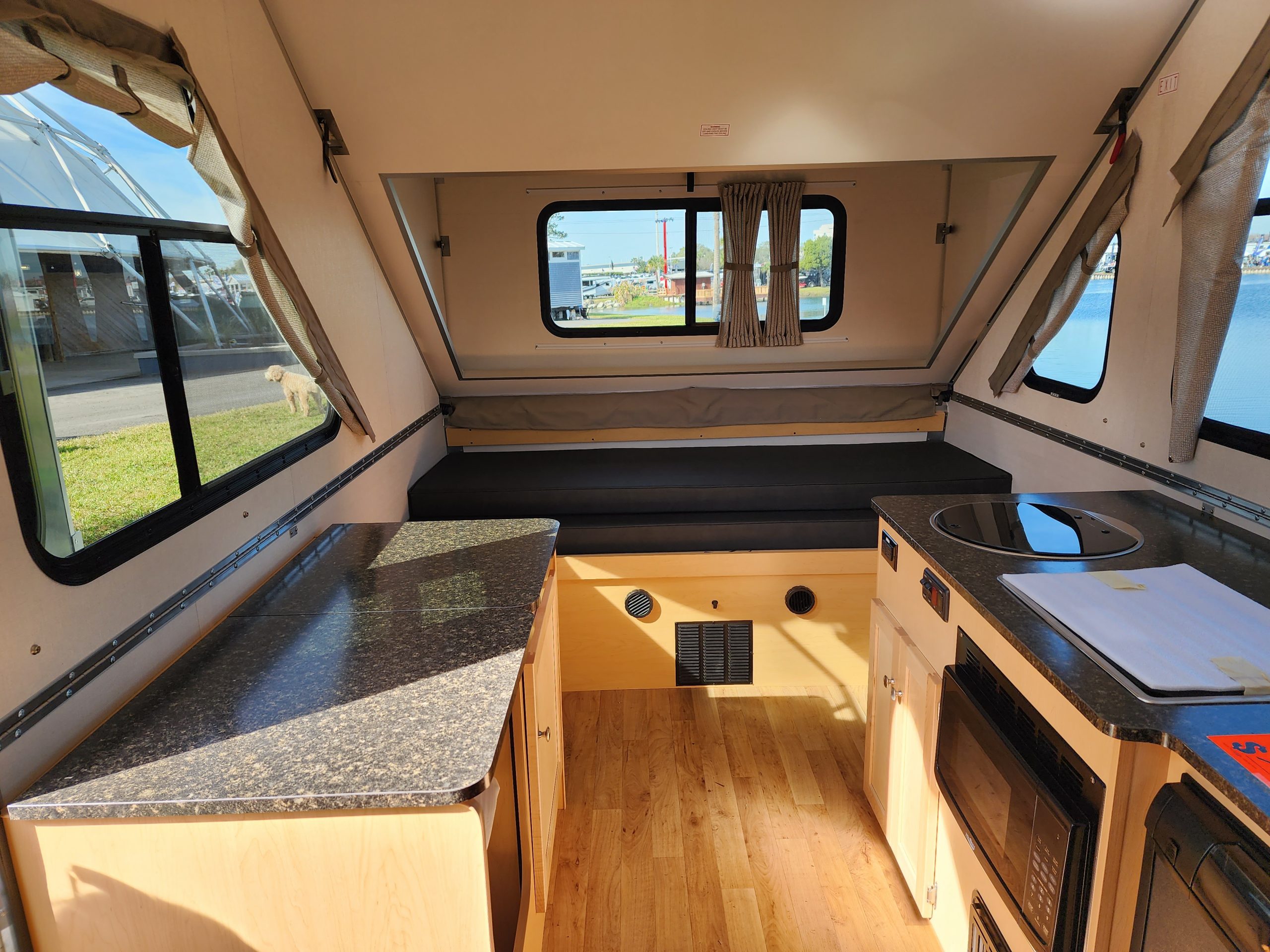 There’s nothing in them that I’d think wouldn’t last very long. That said, these do seem to be an imperfect alternative to tent campers. Some owners have complained about water leaks coming from various places. There are also a number of threads about refreshing or repairing seals after some length of ownership. Of course, there’s no such thing as a totally maintenance-free RV, but it seems that seals and leaks are a concern at least for some owners. 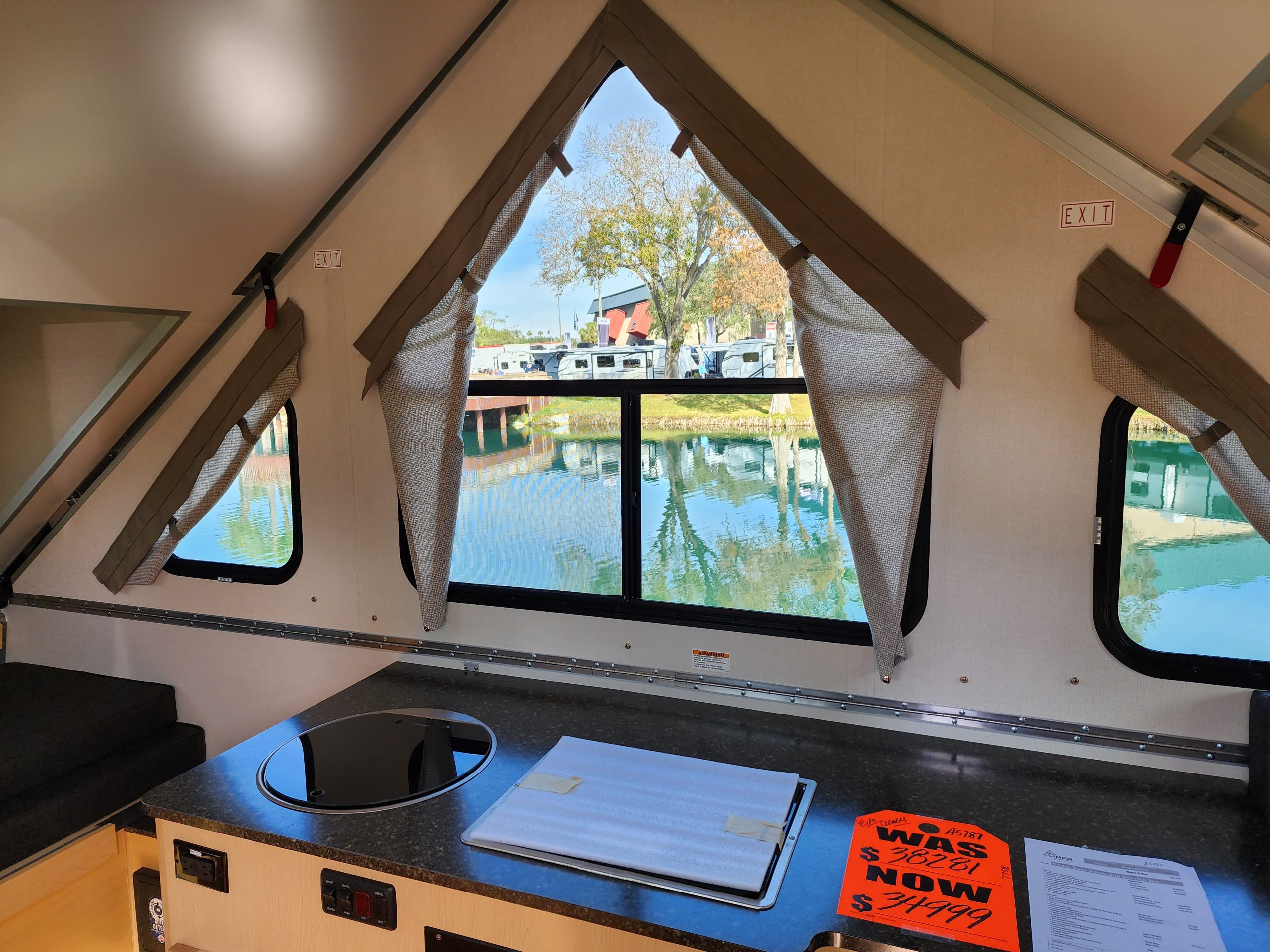 Aliner’s trailers are another type of camper that I’d love to try out for some real camping. They seem to do mostly the same job as a tent camper but without the canvas. At least from my short time messing around with them, I can see why the company has its fans.

Mercedes is a lifelong fan of all things powered by an engine. When she isn't driving one of her five Smart Fortwos or her 14 other vehicles she could be found in the cockpit of a Cessna 172 or perhaps swimming in any body of water that she could find. She also has a deep love for buses of all kinds. Please send her buses. mercedes@theautopian.com Instagram: @mistymotors Twitter: @Miss_Mercedes30 Facebook.com/neonspinnazz
Read All My Posts »
PrevPreviousThe 2024 BMW M3 CS Is A Hardcore Sports Sedan With All-Weather Traction
NextDid You Know That Bears Can Open Car Doors? Comment Of The DayNext