The Hyundai RN22e Is An Ioniq 6 Track Weapon. But We Need To Talk About Fake EV ‘Engine’ Noise

From the hydrogen hybrid N Vision 74 to the upcoming electric Ioniq 5 N, Hyundai is doing some really interesting things in the electric performance car arena. One of these things is the RN22e, an Ioniq 6-based engineering prototype meant as a testbed for the next generation of fast EVs. Thanks to YouTube channel PDriveTV, we have solid in-cabin video of the Hyundai RN22e out on track. Watch this.

So what makes the RN22e tick? Well, there’s a 160 kW motor at the front, a 270 kW motor a the back, and mechanical torque vectoring to put power down. However, power isn’t the only goal here. Hyundai’s N division has been really concentrating on cooling, braking, and suspension to get this heavy electric performance car around the track lap after lap.

It looks a bit greasy out on the circuit, but the Hyundai RN22e seems to be coping admirably. Pirelli P Zero Trofeos aren’t exactly known for wet-weather prowess, yet the pace seen here isn’t bad for an accompanied ride. Sure, the RN22e is happy to hang the back end out with the stability control in sport mode, but that certainly beats fighting understeer. Plus, it can evidently do several laps before needing to go in. I’m excited to see how this translates to the upcoming Ioniq 5 N, but there are a few things demonstrated in this video that give me pause for thought. 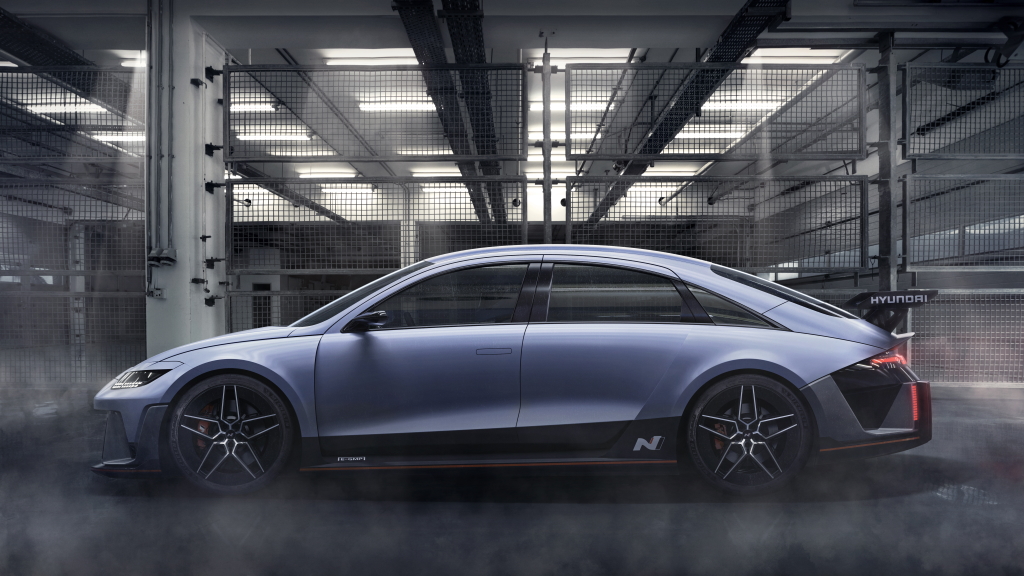 The first thing you’ll probably notice is the noise. The RN22e’s synthetic sound gets pumped through external speakers which frankly, I’m not interested in. Powertrain noise is, by nature, a byproduct. The primary goal of an internal-combustion engine isn’t to make noise, it just so happens that explosions are loud. Sure, the roar of a well-fettled V8 is a joyous byproduct, but why fake noise on an EV when electric motors have their own enticing banshee wail?

In addition, I can’t think of a reason other than posturing as to why I’d want a track-oriented EV to be louder on the outside by artificial means. Tracks have noise limits that you really want to stay clear of, lest you get black-flagged. While there are still tracks out there with generous noise limits like Virginia International Raceway, avoiding fake engine engine noise should ease some fears of Laguna Seca’s 90 dB sound limit.

Then there’s the pleasure of going for a spirited drive without disturbing the peace that most EVs afford. So long as you’re being responsible, you can take an EV to a backroad and have a bit of fun without disturbing nearby farmers. External speakers just make your presence that much more obvious. 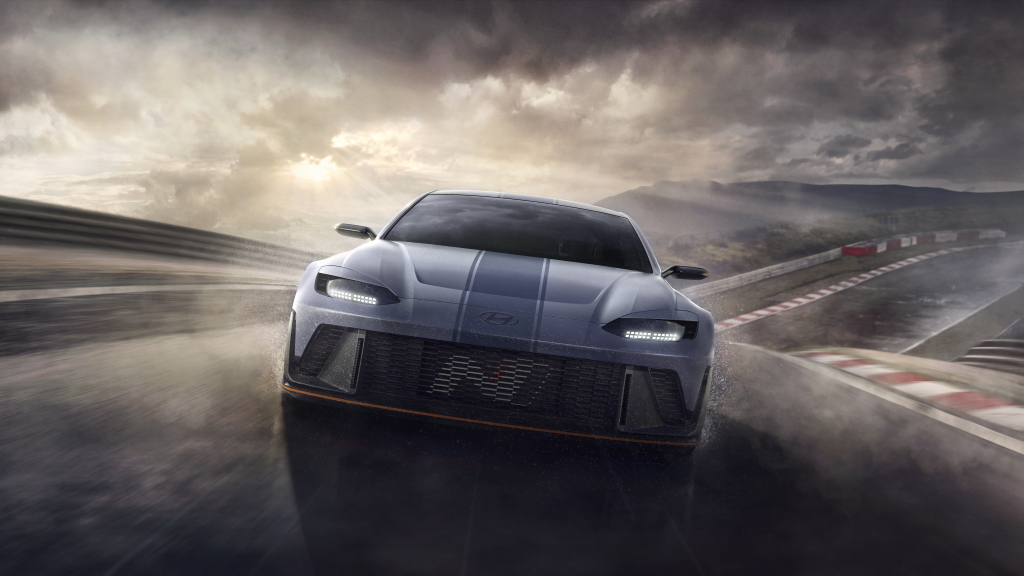 Another strange feature on the RN22e is something Hyundai calls Virtual Grin Shift – basically a simulation of a dual-clutch gearbox. Using sound piped through the external speakers, some special powertrain logic, and a set of paddles, Hyundai is able to fake the sensations of a dual-clutch gearbox. As someone whose only car has a manual gearbox, you might think I’d be stoked for this addition of feel. In reality, I feel like it’s something I’d never use.

In an internal-combustion car, gears are a necessity. If engine speed goes too low, the engine stalls. If engine speed goes too high, catastrophic damage can occur. In an EV, you never have to worry about stalling and peak motor speeds are so high that most electric cars render gears unnecessary. A fake DCT doesn’t serve a necessary function, nor is it faster than just letting the electric powertrain do its thing as single-speed electric drive units have no torque interruption and will never be in a sub-optimal gear. That’s not to say that an EV with multiple gear ratios and paddle shifters wouldn’t be sweet, but that’s worlds away from the purpose of this system. Still, it’s not exactly a nuisance, and it really signals that driving engagement matters to Hyundai. 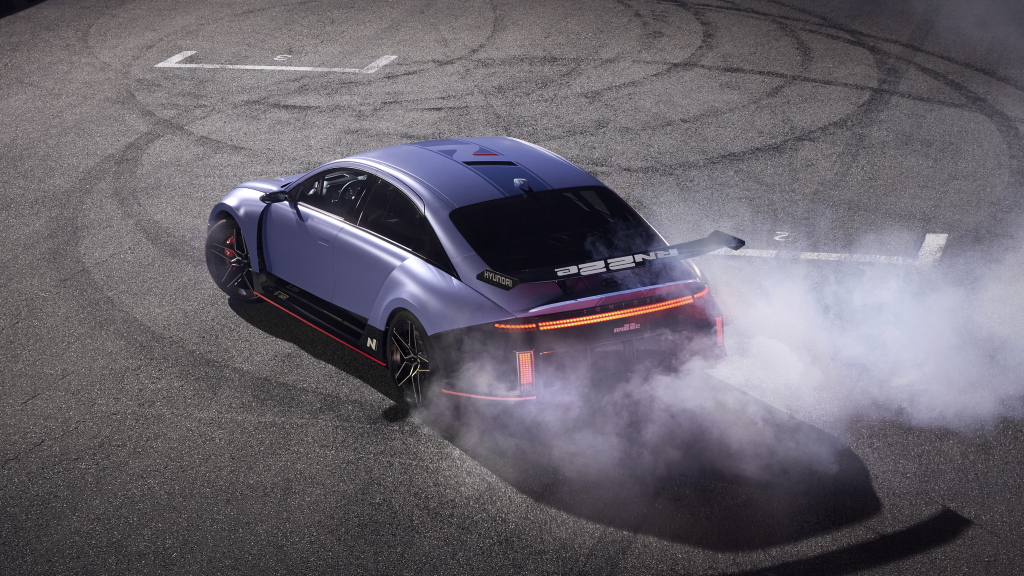 Granted, these are fairly minor gripes in the grand scheme of things, and the world’s a better place with automakers pushing for trackworthy electric cars. I mean come on, would you really want to live in a world without sports sedans from retail brands? While the real future solution for longer lapping sessions is an EV for daily use and a fun ICE car on the weekend, an all-in-one solution like the RN22e doesn’t sound like a bad consolation prize at all.

[Editor’s Note: I think all the things Thomas is addressing here – fake engine noise, fake gear changes – are the result of some lingering insecurity EV makers have about their identity as performance cars. What I like about them is that while they’re silly, sure, they’re silly in the service of driving enjoyment and the associated irrationality of why we like cars. I suspect these are a sort of transition affectation, and in decades to come we’ll view these as strange fun quirks from the interesting blurry period between combustion cars and EVs. You’ll be asking owners to make their RN22e make the funny noises at a Cars and Coffee in 2043. – JT]

The Hyundai RN22E Is A Track-Focused Hyundai Ioniq 6 Meant To Show How The Upcoming Hyundai Ioniq 5 N Hatchback Will Conquer Racing’s Archnemesis: Weight

Thomas is a Nu Rave-blaring, heel-toe downshifting, maple syrup-swilling, chassis-geeking, junkyard parts-hauling, floppy-haired scenester who's been writing about cars since college. His current ride is a 2006 BMW 325i with the six-speed manual gearbox. Instagram: @thomas.hundal Twitter: @thomashundal
Read All My Posts »
PrevPreviousHere’s What A Ford Mustang Raptor Would Look Like If Our Professional Designer Had His Druthers
NextWe’re Driving A 1966 Ford Mustang And A New Jeep Wagoneer (Towing A Golden Eagle) From Detroit To LA Next Week. Come Hang Out!Next