Facebook-f Twitter Instagram Rss
Menu
Menu
Home » There Was A Time When Americans Could Buy A 300-Horsepower Supercharged Wagon From Audi: Holy Grails

There Was A Time When Americans Could Buy A 300-Horsepower Supercharged Wagon From Audi: Holy Grails 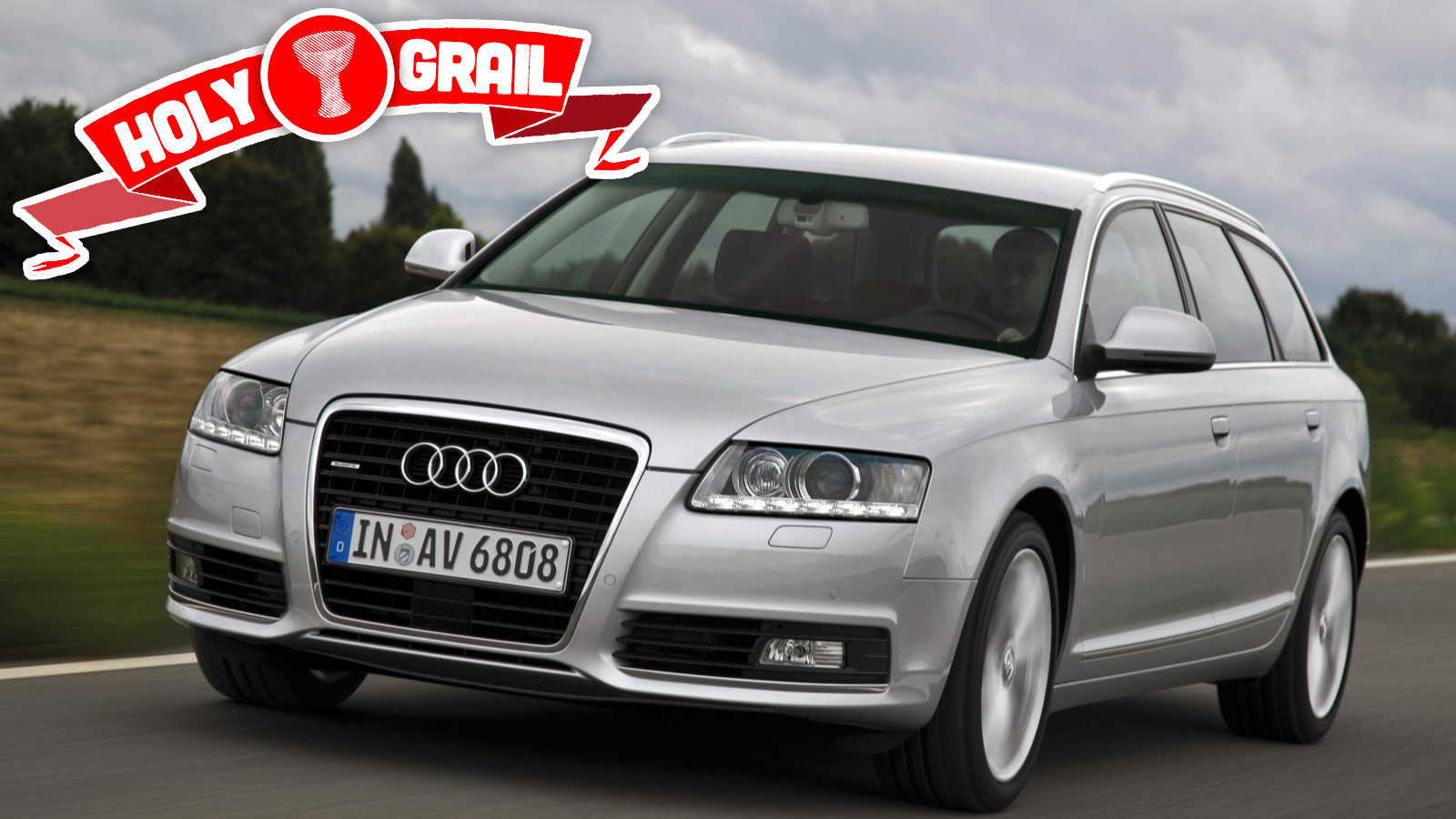 For a short period of time, American car enthusiasts could have purchased a wagon in a rare configuration. Sold from just 2009 to 2011, Audi offered its stately A6 in an enticing configuration. The Audi A6 Avant 3.0T looked like your everyday Audi wagon, but under its hood sat a supercharged V6 pumping out 300 horsepower 310 lb-ft to all four wheels. Yet, so few people bought them that there are just 1,066 of them on the road.

Welcome back to Holy Grails, the Autopian series where we show off some of the coolest, most underrated cars that you love. Now that this series has run long enough, I’m beginning to see a trend in the vehicles being sent in. It seems that our readers really love vehicles from that time when Chrysler was experimenting with turbocharging. Ford and Chevrolet also get some love with interesting versions of their trucks and vans. And one vehicle sent in is so rare that I could not find a single piece of official documentation or even a story on it — even from a bad source! I’m excited to write that up; please keep those grails coming because calling them awesome is an understatement.

Last week, reader Jack Trade alerted us to a Ford Mustang that was sold for just a single year. On paper, the 1995 Ford Mustang GTS was just a cheaper version of the Mustang GT, offering V8 power and tossing everything that you didn’t need into the trash. But there was more than that going on, as this car was essentially the last breath of the third-generation Fox body experience. It was powered by the 5.0 HO V8 that was housed in the old Fox body but in a new package. That made it a callback to the famous Mustang LX, which featured a similar formula of all firepower and nothing else.

Today, we’re returning to a familiar formula for this series and giving you a powerful, rare car that didn’t sell many examples.

Launched in 1994, the first-generation Audi A6 actually started off as a facelift of the Audi 100. As the UK automotive service company RAC notes the Audi 100 (Audi 5000 in America) was selling slowly and when it got a facelift, Audi renamed it the A6 to go along with the automaker’s new alphanumeric naming scheme. As Motor Trend notes, along with the C4 platform A6 mid-size sedan came a wagon. Around this time, Audi also renamed the S4 to the S6, and the S4 name would return later on.

One way Audi kept the A6 exciting is with a variety of engine choices. Motor Trend notes that 2000 was a year with some sizable updates. By now, the A6 had evolved into its second generation, which rode on the C5 platform. Along came a 4.2-liter V8 making 296 HP that drove all four wheels. Also on deck was the 2.7-liter twin-turbo V6 that made 250 HP and once again, drives all four wheels through Audi’s Quattro system.

It was also in 2000 when Audi also introduced the Allroad as a version of the A6. This came with an adjustable air suspension, higher ground clearance, and a body with a bit of off-road chic thanks to its gray bumpers and fender flares.

Contrary to what online sellers say, this is not exactly the same V10 out of the R8 or exactly the same V10 from a Lamborghini, but it was still pretty incredible. You got that lovely V10 exhaust note, 435 HP, and a 0 mph to 60 mph sprint in just 5.2 seconds. And you got all of that in a stately sedan package. And yet, even these are surprisingly cheap on the used marketplace; I can usually find at least one for under $10,000.

This performance monster perhaps overshadowed another potent version of the A6. Starting in the later part of 2009, you were now able to spec your A6 out with a 3.0-liter V6, and this unit was cool, as it featured an Eaton four-lobe supercharger, capable of 11.6 psi of boost. And if you like your roofs long, I have good news because you can get it in an Avant.

This is the one that PlayswellwithNOthers says is a real holy grail:

I nominate the 2009-2011 Audi C6 4f A6 Avant 3.0t as my Holy Grail. It is a great-looking (they still don’t look outdated to this day) wagon that came with the very easily tunable and surprisingly reliable 3.0T supercharged V6 (engine code CCAA, type EA837). The 2009 facelift of the Audi A6 was the first vehicle to feature this engine.

Rated at 300hp and 310lb.-ft. in the US market version, it makes the Audi A6 wagon a great sleeper. As far as technology is concerned, the A6 came with Audi’s MMI infotainment system and was available with features such as 3D maps, traffic guidance, blind spot warning, lane assist, adaptive cruise control, adaptive headlights with cornering lights, high beam assist, and other systems that are now common in most vehicles.

It is a nice big family cruiser, that is also very fun to drive, especially when tuned (up to ~480hp/~450lb.-ft.). Being a fairly rare vehicle, a following has developed and when a nice one comes up for sale, it usually does not last long. There is even a thread on the Audizine forum for 3.0t Avant for sale sightings.

PlayswellwithNOthers somehow understated how rare these wagons are. According to a forum post on Audizine, which claims to have come from direct contact with Audi, there were a total of just 1,066 of these sold in America. That makes these rarer than even some of my favorite cars. It’s rarer than the concept car-turned-real car Smart Crossblade. It’s even rarer than the Volkswagen Phaeton!

Perhaps a reflection of its rarity, while I’ve found many reviews of the Audi A6 3.0T Quattro sedan, I’ve found few for the Avant. One is this AutoGuide review, which found that the supercharged V6 dished out performance similar to the V8:

In reality, the new engine is significantly lighter than the old V8 – helping the middle model to weigh in some 200 lbs. less. Not only does that aid acceleration, but fuel mileage as well, with the 3.0T averaging 21 mpg to the V8’s 18. Audi rates the car at 18-mpg city and 26-mpg highway. Otherwise, both share the same six-speed automatic transmission with Tiptronic, and quattro all-wheel drive hardware.

This review ended by saying that the A6 3.0T falls short of the competition, saying that it crashes over bumps and that a BMW 535i xDrive would leave it in the dust. In a period Car and Driver review, the tester found it to be slower than both the BMW and a Mercedes E550 4MATIC. However, the Audi still had a trick up its sleeve. The V8 in the Mercedes and the twin-turbo six in the BMW were both more thirsty than the Audi. And in Car and Driver’s test, the 3.0T actually beat Audi’s own A6 4.2 V8. Basically, it seems that this Audi wasn’t the fastest or the best-handling competition on the block. However, it managed to give you V8 performance without the V8 fuel economy penalty.

Still, that wasn’t enough, apparently. The A6 Avant 3.0T, which started at $53,310 (the sedan was $52,425), wasn’t long for this world. C6 A6 production ended in 2011, and while the supercharged engine carried over to the new fourth-generation C7 A6, the Avant did not. In fact, the A6 would go without a wagon version in the United States until 2020, when it came back as the Allroad. And by that time, the Allroad had been dead for a while, too.

Perhaps as another example of this vehicle’s rarity, I found only a couple of them for sale. Here are two for sale in California. I found a bunch of listings all claiming to be wagons, but they were clearly not, which is a bit weird. It does seem that if you can find one, hold onto it because these wagons don’t seem to come by often.

Do you know of a ‘holy grail’ of a car out there? If so, we want to read about it! Send us an email at tips@theautopian.com and give us a pitch for why you think your favorite car is a ‘holy grail.’

• The Dodge Spirit R/T Was The Fastest Sedan Built In America And Nearly As Quick As A BMW M5: Holy Grails

• Holy Grails: The MG ZT-T 260 Is A Super Rare British Wagon With A Ford V8 Heart

Mercedes is a lifelong fan of all things powered by an engine. When she isn't driving one of her five Smart Fortwos or her 14 other vehicles she could be found in the cockpit of a Cessna 172 or perhaps swimming in any body of water that she could find. She also has a deep love for buses of all kinds. Please send her buses. mercedes@theautopian.com Instagram: @mistymotors Twitter: @Miss_Mercedes30 Facebook.com/neonspinnazz
Read All My Posts »
PrevPreviousThe Incredible Alfa Romeo Giulia SWB Zagato Is A Three-Pedal Scorcher Here To Haunt Our Dreams
NextThe Citroën CX Familiale Holds A Ridiculously Specific Automotive RecordNext