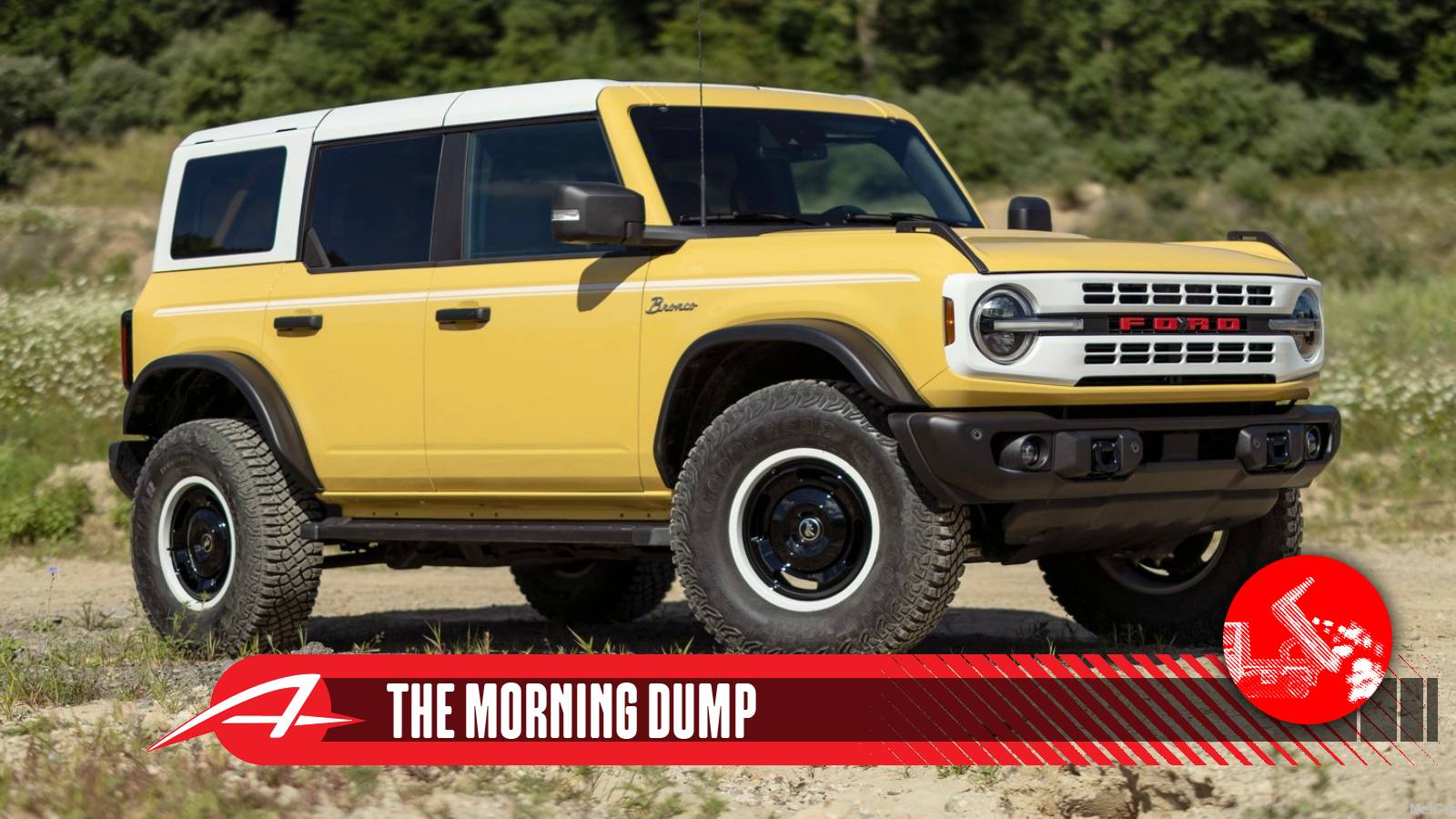 Good Wednesday morning and welcome back to The Autopian’s yet-to-be-renamed morning news roundup. On tap for you today: Ford will pay you to go away, then it may pay its European plant to go to BYD; Tesla’s Autopilot is slipping in the ratings; and the electrified Honda Civic is back. Let’s do this thing.

Think the auto industry’s supply crunch is over? Think again. Ford debuted the insanely popular Bronco at a very unfortunate time — right in the middle of the pandemic — and that’s kept a lot of models from reaching buyers’ driveways. The automaker has a bunch of Bronco orders it needs to fill, and now it’s going to pay you cash money if you consider another Bronco trim level or switch to another model entirely.

The automaker says those who ordered a 2023 Bronco Wildtrak can receive the discount by switching to a Big Bend, Outer Banks or Badlands trim without a molded-in color hard-top roof, Sasquatch package or Lux package.

Alternatively, customers can get the same discount by choosing another Ford vehicle. The automaker says customers can opt for any 2022 or 2023 in-stock model or elect to order an Escape, Bronco Sport, Edge, Explorer, Expedition, Ranger or F-150.

That excludes the Mustang Mach-E. I know what you’re thinking because I thought the same thing: get a $2,500 cancellation discount and then a $7,500 EV tax credit for that car, right? But no, it doesn’t work that way. Probably because the Mach-E is facing similar supply and demand challenges. Sad.

Here’s what Ford has to say about the matter:

“Due to ongoing supply chain challenges, we are notifying a small number of existing Bronco reservation and order holders that they can receive a 2023 model year Bronco if they remove certain constrained features, including the Sasquatch package, Molded in Color Hard Top and Lux Package. Customers who remove constrained features are expected to receive a 2023 model year Bronco along with a $2,500 rebate toward purchase or lease in addition to existing MSRP price protection they may have.”

So what happens if you don’t act on this information? If your ordered Bronco can’t be delivered in 2023, your order will be canceled, and if you want the same car you’ll have to re-order it at 2024 model-year prices. My advice here, if you ordered a Bronco of any sort for 2023 or some of these other Fords, would be to hit your dealer up ASAP and see what your options are. Don’t sleep on this one.
[Editor’s Note: Ford has been having trouble with the Molded-in-color top for a while now. I spoke with Jeff Marentic, the company’s General Manager for Passenger Vehicles, back in August of 2021, and he said he was embarrassed:

“One of the primary challenges and why we’re talking this morning is: Ramping up hardtop production with our supplier partner Webasto has been a bit more challenging. We’re still not where we need to be on volume and quality on the two and four-door hardtops.”
“Embarrassed to say, but we did catch this early, and we’re doing the right thing. During pre-delivery inspections, we found out that these molded-in-color hardtop roofs didn’t meet our standards,” Marentic continued before making it clear that this issue does not impact the top’s functionality.

“It causes, and could cause, an unsatisfactory cosmetic appearance. So what we’re doing — we need to do this right — we’re replacing all hard-top roofs for customers who have either taken delivery, as well as those that are waiting at dealers … and then we’re also going to replace all the roofs that have been built and awaiting final release at the Michigan Assembly Plant.”

“It’s cosmetic, or could be cosmetic,” Marentic made clear, saying owners can keep driving and “posting the way they’re posting and showing what this vehicle is capable of.”

The molded-in-color nightmare continues for The Blue Oval. -DT]

Ford’s German Plant To Build Some Dreams Instead?

Speaking of Ford, we knew that it was killing off the Focus to focus (sorry) more on “American”-style vehicles like SUVs and trucks. So what happens to the Focus’ soon-to-be former plant in Saarlouis, Germany? Well, the Wall Street Journal reports that could soon be a jam for BYD, China’s biggest automaker and one with big plans for the rest of the world:

Officials from Ford‘s management in Germany are planning to travel to China next week to discuss the potential sale of a plant in Saarlouis, where vehicle production is slated to end in 2025. Ford produces its Focus compact model there. Terms of the deal, including a price, couldn’t be learned.

The talks are still in a preliminary stage, and a deal may ultimately fall through. In addition to BYD, Ford is also talking to other manufacturers, including Magna International Inc., a Canadian contract auto manufacturer, and financial investors, who could potentially join with a manufacturer, the people said.

[…] Selling the Saarlouis plant would mark another step in Ford’s efforts to overhaul its European operations and shift completely to electric vehicles. It would also be a major step for China’s electric-car industry, which has begun expanding into European markets.

That story notes that BYD sold 1.86 million electric and plug-in hybrid vehicles in 2022, a threefold (!!!) increase from the previous year. Having an automotive plant actually in Europe would give BYD some serious ammunition to expand in that continent.

Another Hit For Tesla’s Autopilot 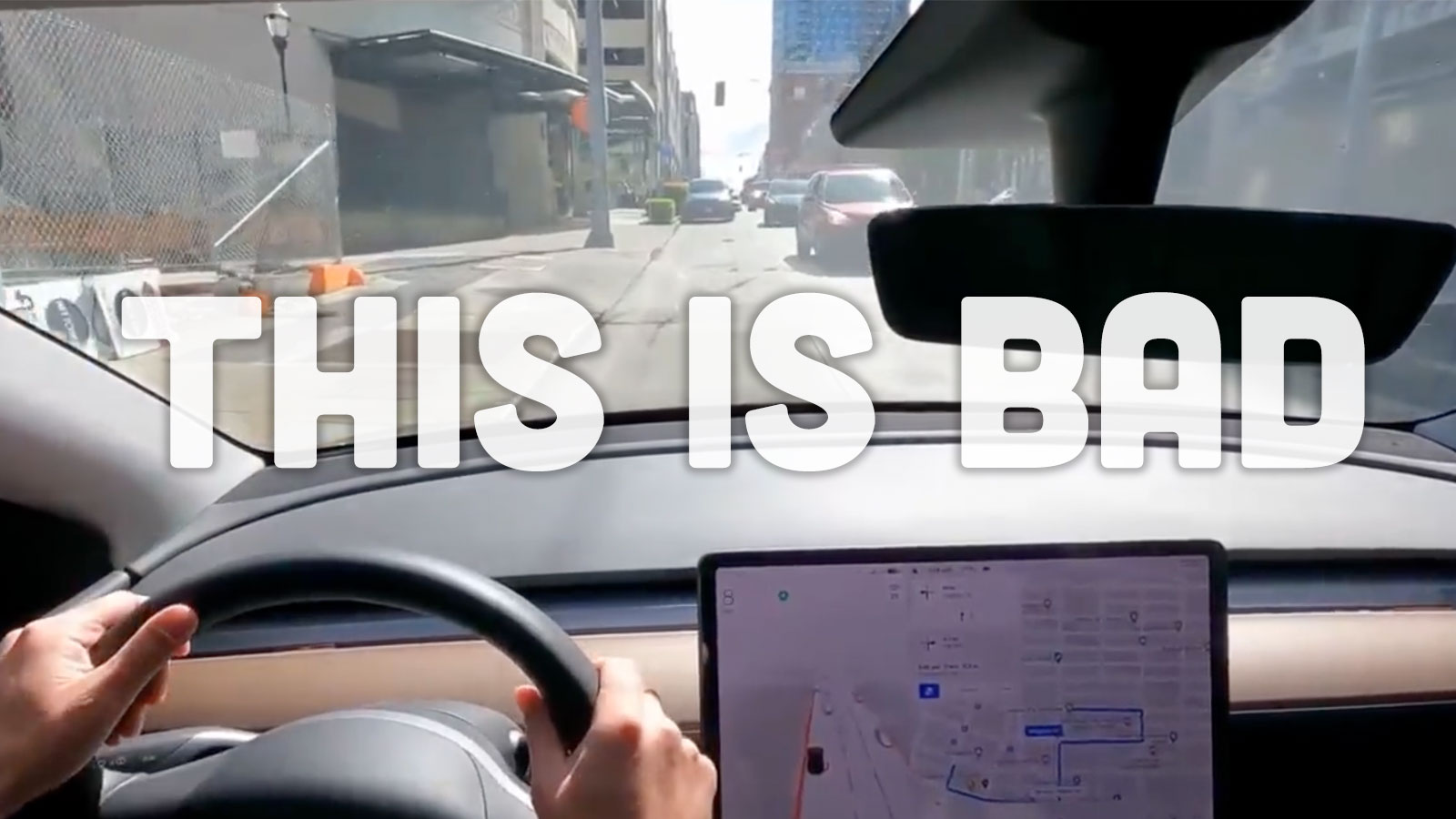 If you need any additional evidence that “Full Self-Driving” is nothing of the sort, here’s Reuters on a new Consumer Reports dispatch (that isn’t online yet) ranking Autopilot below a number of competitors:

Tesla, which was second in Consumer Reports ratings in 2020 behind Super Cruise, fell to seventh, the group said.

Emphasis mine right there, because I wanted to get at the heart of why Autopilot isn’t measuring up. Besides seemingly being willing to take more risks than most ADAS systems, Autopilot is starting to lag behind competitors in important advancements like minding drivers so they don’t do something extraordinarily stupid with the system engaged.
And frankly, I’m not sure why that is. Tesla pioneered this stuff. We all know it’s had problems from the get-go and was born under false pretenses, but why not try and lead the way a little better here? Is Tesla too cheap to implement systems that would fix this? Too confident in the ultimate success of AI-driving? Why doesn’t Tesla get its shit together when it comes to Autopilot? As that story says, every other OEM is catching up fast. Tesla can’t afford to lose a lead in any race anymore.

Remember the Honda Civic Hybrid? You probably do, but it hasn’t been sold on American shores since 2015. After a generational hiatus, Honda says it’s back, according to Car and Driver:

We reported last April that Honda had launched a hybrid version of the Civic hatchback in Europe, and speculated that the car would also come stateside to fill the gap left by the discontinued Insight sedan. We’re not sure yet exactly how Honda will adjust the European car’s powertrain, which consists of a 2.0-liter inline-four and two electric motors that combine for 181 horsepower, for the U.S. market. But we can only hope that its output comes closer to the 204 horsepower offered by the closely related hybrid setup in the 2023 Accord hybrid.

The new Civic is an exceptionally good car. If they keep the Civic Hybrid’s price reasonable, I think you would be hard-pressed to find a better daily driver than that.

The Flush (For Now)

Volkswagen Allegedly Fires Design Chief For Being Too Awesome

Editor-at-Large at The Autopian.
Read All My Posts »
PrevPreviousFresno Five-Cylinder Battle: 1982 Mercedes 300D vs 2008 VW Rabbit
NextOur Daydreaming Designer Imagines How Brazil Could Have Modernized The Old Beetle DesignNext