I won’t name names, but you’ve all seen actors and musicians that just flat out refuse to grow old gracefully. Sadly, in many cases, their attempts to make themselves look younger and more hip only make them appear worse than if they’d left well enough alone. (Though what really matters is how they feel, and I can respect that). The same situation has existed in the automotive world. Car companies will try to make angular cars look curvy if trends start to go that way, or straighten out lines of a rounded car if fashions dictate, all with as minimal effort as possible. Ground effects, more “updated” lighting assemblies, and “body cladding” are all used as attempts to disguise decade (or more) old designs. Most of the time, it just doesn’t work.

Some examples are below- can you think of more?

Of all the cases of extreme facelifting to keep ancient cars looking “current,” it’s hard to find better examples (or worse examples, really) than some products sold in South American, particularly ones offered by divisions of Ford.

One of these cars is the Ford Falcon, or namely the first compact sedan that Ford debuted for the American public in 1959. This exact body was sold in Argentina until the 1990s, and in the eighties Ford attempted to “update” the machine with the fashions of the day, meaning black trim, composite headlights, and more modern wheels. The end result is almost creepy, like something out of a sci-fi movie of an alternate future:

Ford of Brazil did a similar thing with its trucks. Take a look at the passenger compartment for this rounded-nosed vehicle below. Yup, that’s the new-for-1967 fifth-generation F-Series truck there:

What if you are a designer working for Volkswagen of Brazil, a company that famously made the original VW Beetle (which the company called the “Fusca”) up through the Clinton administration years. One day in the early eighties, your bosses walk in and start screaming in Portuguese, lauding the aesthetics of this rather ham-fisted ‘new’ Falcon in Argentina. You are now assigned to do something similar to the poor Fusca.

This job will truly suck. Can you imagine how odd and disturbing the result would look? Well, imagine no more, dear Autopians, since we’re about to step into this poor Brazilian designer’s shoes and give it a shot.

Thankfully, for some reason, as a designer you are able to receive brain waves from halfway across the globe, including those of a pre-teen boy in North Carolina named Jason (remember, we’re imagining we’re back in the early 1980s). This child has yet to have his mind filled whatever corrupt thoughts typically fill a teen’s mind, and now his head is just overflowing with ideas for the VW Beetle. There are two ideas which you intercept from him that would only have come to light decades later when he became one of the greatest automotive voices of his generation, at least to those that find dick and fart jokes funny.

The two ideas this from this kid for updating the Beetle include blacking out the B pillar and adding a hatchback.

However, there’s another trend in Brazil that has existed for years and is hard to comprehend, but we’ll latch onto it anyway. For whatever reason, some Fusca owners will do extensive (and I mean EXTENSIVE) modifications to their old Beetles, often adding entire front and rear clips from other cars and carefully fairing them into the original car. This process must have required  hundreds of hours of work and many tins of whatever the Brazilian equivalent of Bondo is. The goal with these artisans seems to be not only adding individuality to the looks of their rather ubiquitous rides, but also attempting to convert to an aesthetic of lower, modern lighting clusters that hug the bumpers on both ends of their cars, ditching the friendly face up front and the elephant toenail rear fixtures.

WARNING: The below images are graphic in nature and might be disturbing for some readers: 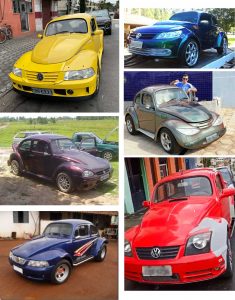 I’m not sure how, um, how much of an improvement these are to the Beetle’s looks, but since we’re going all-in on the crazy here, why not attempt something similar on our new Fusca?

First, we’ll take Jason’s blackout idea a bit further by enlarging the dark window perimeter to include hiding the cabin exhaust vent behind the rear window as well. For the hatchback part, Jason was suggesting using the VW Type 3’s flatter ‘pancake’ engine to give more cargo space, but there is no way that the Brazil division will want to spend that kind of time and money reengineering this old car. However, if you’ve ever looked at the cargo area behind a Beetle’s rear seat, or as a Gen X toddler ever ridden back there in pre-car seat days with your siblings and friends, you’ll know that just having the fucking glass window open would do wonders to accessing this space. I’ve made a fiberglass frame to hold the new glass and accommodate the hinges and latch.

Besides these two changes, our ‘new’ 1984 Fusca would smooth out the front and rear fenders, filling in the current light fixture openings and mounting new, modern clusters to the tops of the bumpers front and rear sitting slightly back from the front surface. This would be easily the least expensive way of getting that ‘low light’ look that the customizers seem to hold so dear; VW Brazil would not want to shell out the cash for the tooling to make the body changes needed to ‘fair in’ the lights to the body. Plus, these fixtures could just bolt on and off if you need a replacement. 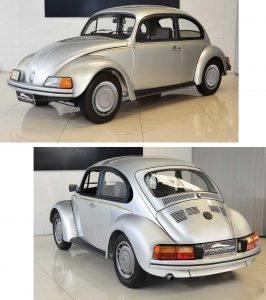 We could even mount the small Brazil number plate in back above the bumper to allow the engine compartment to be ‘shaved’ as well (you can still get the door open, since I am imagining the plate could flip down or even lift with the engine cover).

Inside, you can see that the Fusca had the flat, old school pre-Super Beetle dash.

To this we could update things a bit by adding a bumped-out section for the gauges that also features ‘fingertip’ buttons on the sides similar to concurrent Audis. On the passenger side, a similar ‘bumpout’ would increase glove box space. 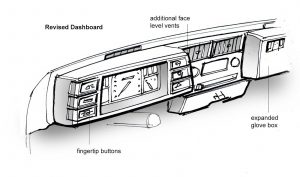 Like that Argentinian Falcon, this concept for a New Fusca is an uncomfortable mixture of different eras at odds with each other. But what do I know? There must have been a market for these types of low-dollar, home-grown, strangely updated vehicles since they obviously did find buyers in this part of the world. Also, with Fuscas we’ve obviously seen some individuals willing to spend inordinate amounts of time and effort to make their cars look like this.

Still, if you’re after the fountain of youth, plastic surgery is something you need to be careful with- it doesn’t always produce the results that you are looking for.