Coming to CES this year is an electric motorcycle with some ambitious promises. The Davinci DC100 is supposed to be an electric motorcycle featuring 135 peak horsepower, a top speed of 124 mph, and 249 miles of range. But more than just a strong performer, Davinci Motor says that this thing will be able to ride and park itself using a self-balancing system.

We’ve been following a lot of electric motorcycle concepts over the past several months. Most of them have been on the lower end of the market, while others brought along nifty features. But every once in a while, a motorcycle manufacturer or supplier will try to push the envelope. A good example is Autoliv, the company trying to put an airbag on your motorcycle.

Davinci Motor Corporation, a startup company in China, wants to prove itself not just as a motorcycle manufacturer, but a tech company, too. Thus, it’s rolled into Booth 10163 of CES 2023 with the U.S. debut of its ambitious DC100. 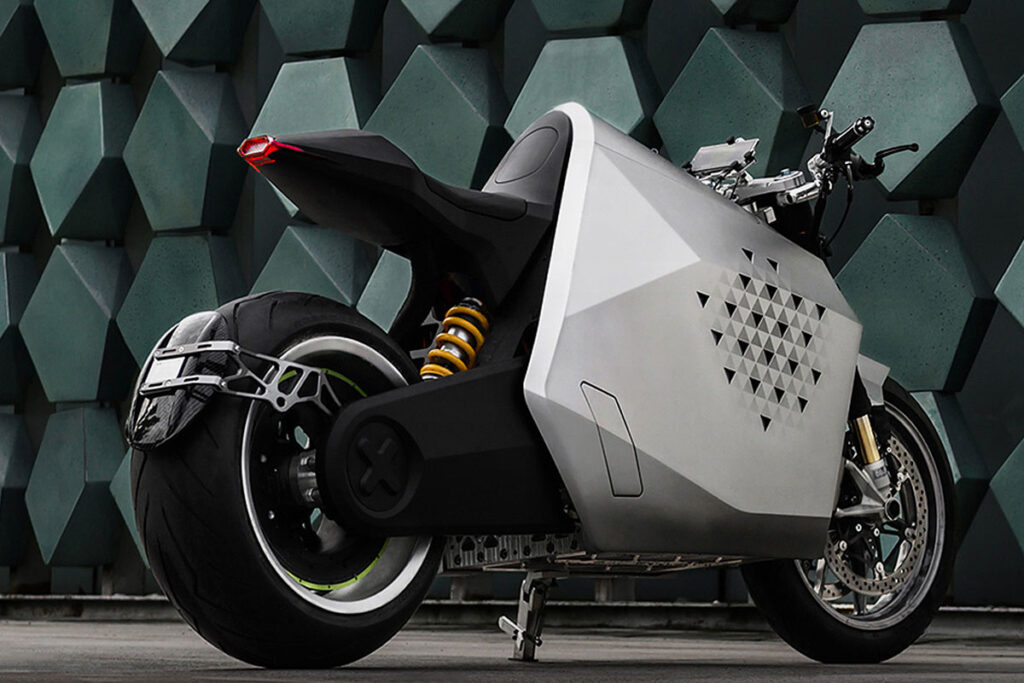 Davinci Motor Corporation is a company with a short history. It was founded in 2013 with the goal of exploring research and development of robotic vehicles. The company is stacking the deck with engineers from Beijing’s Tsinghua University, and their goal is to make motorcycles that offer an effortless and joyful riding experience.

Since then, the team has been working on a motorcycle that it also calls a robot. The wraps were first taken off of the DC100 in 2021. Back then, the company described the motorcycle as a “two-wheeled dynamic robot that is able to understand its environment and translate the information it gathers into an optimized, smart and high-performance riding experience.” 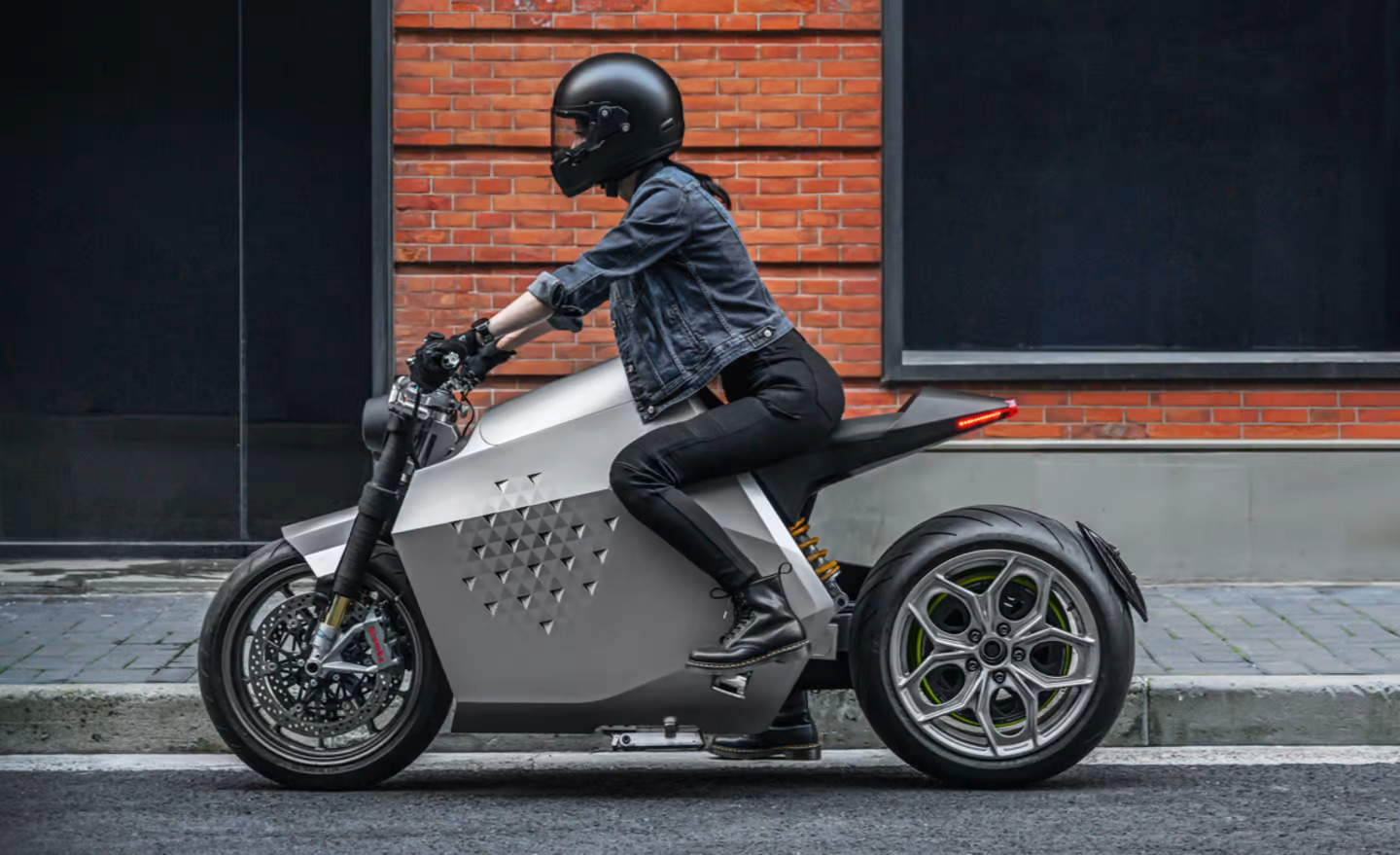 At first glance, this sounds like something incredible, albeit vague. Thankfully, the website explains what this means:

The DC100 has more than 1000 chips and over 200 advanced sensors that track accurate information on the environment, vehicle movement status, road conditions, battery and motor temperature, lean angle, and so on. While riding, the DC100 will combine this data to precisely control its power system and so ensure optimal performance under all conditions. This will make your riding experience easier and safer, allowing you to fully enjoy the ride. 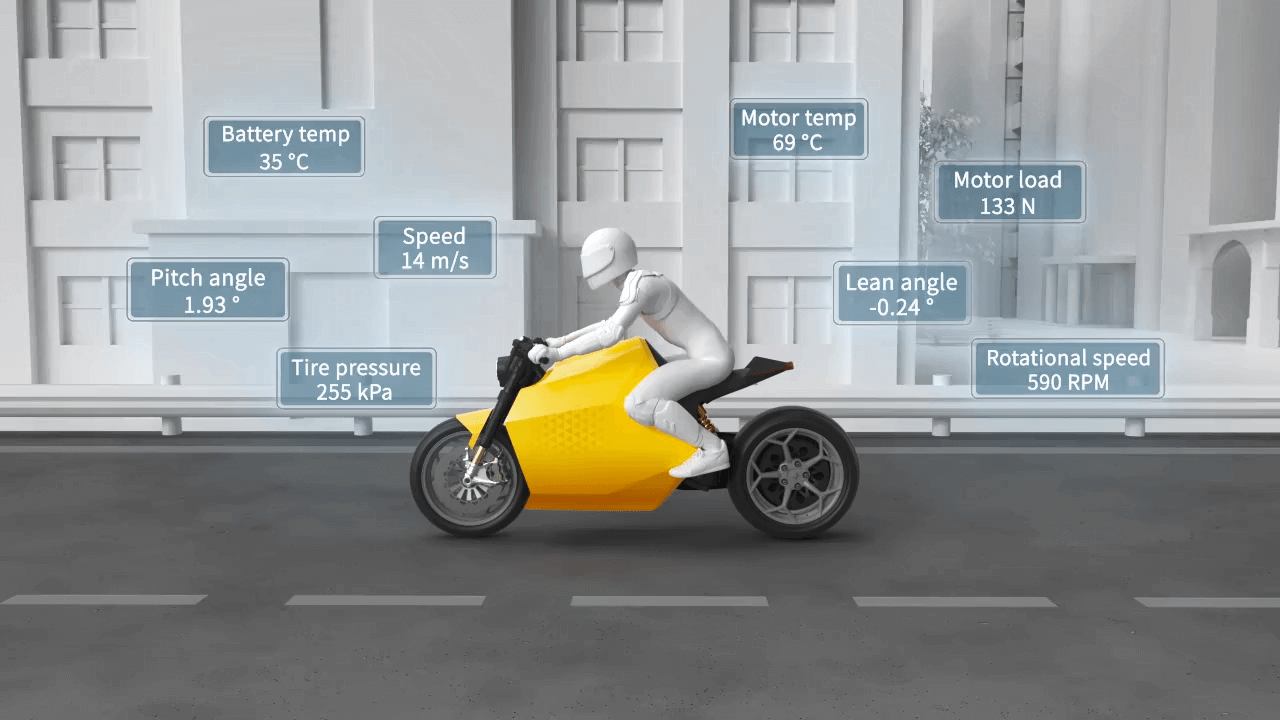 Now, a lot of motorcycles already have a bunch of sensors that monitor what the machine is doing. They can also react to changing conditions like wheelies, a loss of stability, a loss of traction, and more to keep the bike shiny side up. However, it appears that Davinci is suggesting that this motorcycle will do more than that by using the data it collects for an adaptive throttle system. Davinci’s goal is to make a motorcycle as easy to ride as possible, so this makes sense.

The company has also says it’s applied that concept to maneuvering the machine. The company says that controlling the throttle and brakes can be done with just a single hand. Thanks to the motorcycle’s linked braking system and numerous computers, Davinci says that the motorcycle can provide “the most suitable braking force distribution for every braking dynamic.” And all the rider needs to do is focus on the single brake lever in front of them on the right.

Another maneuvering feature that caught me by surprise is the fact that the company claims the motorcycle has a “creep mode.” You know how an automatic car likes to dawdle along at like 5 mph after you let go of the brakes? This motorcycle will do the same when you release the brake lever. This is a feature that I’d see no real benefit in having, but then again, this motorcycle doesn’t appear to be made for someone like me. A feature I do like is the inclusion of a reversing mode that uses the bike’s motor to back it out of a parking space. Other motorcycles have this, and I admit there have been times when I wished my old bikes had a feature like it. 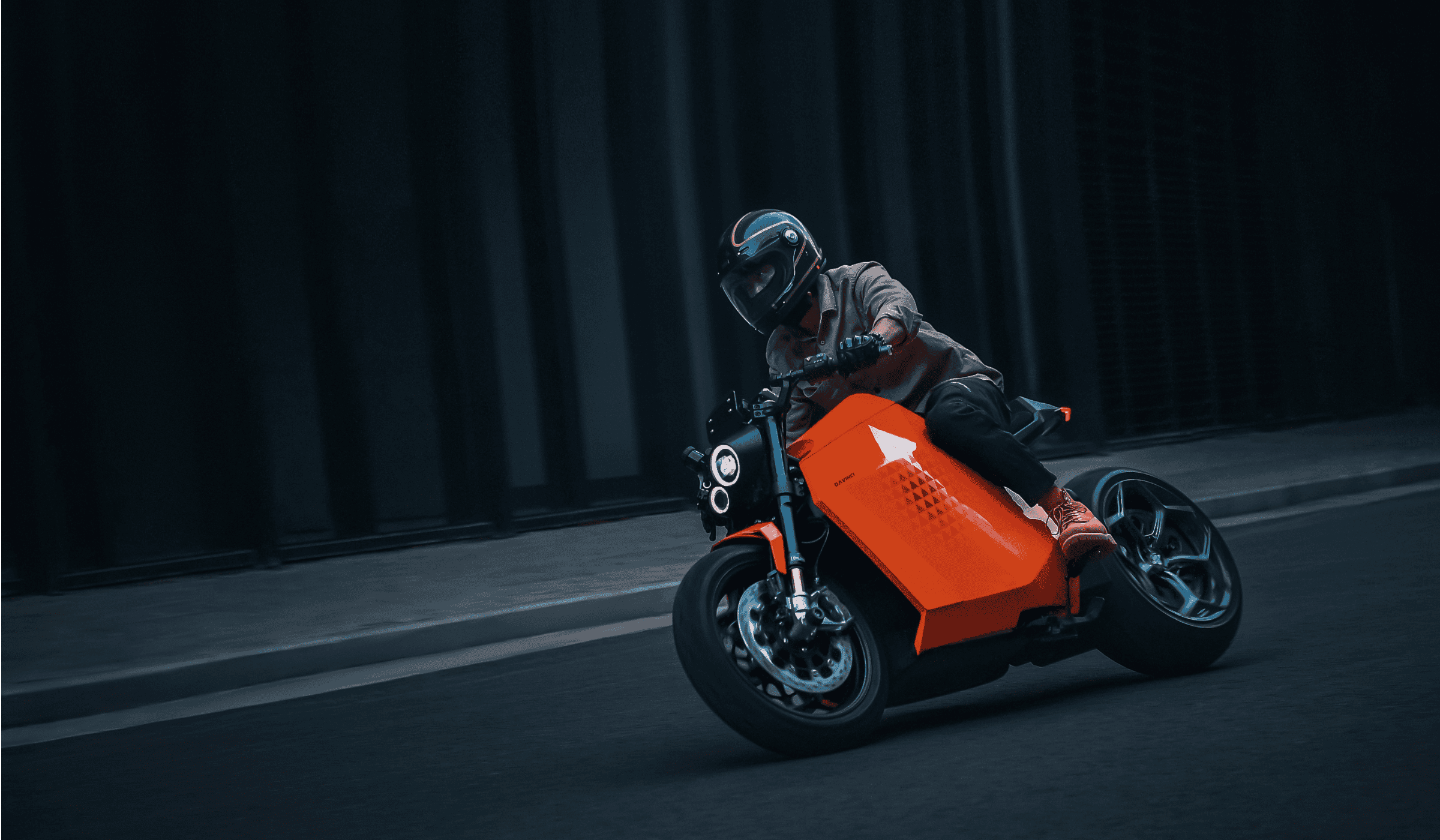 These features are all tied to a suite of rider assistance tools that include traction control, hill start assist, and ABS, to more novel offerings like a hill descent assist that’ll keep the motorcycle from running away from you on a slope. It’s because of these features that Davinci calls it a robot. That may be stretching the definition a little, but the company’s plans for the motorcycle will bring it a lot closer. More on that in a moment.

Propelling the DC100 is a hub motor rated for a peak output of 135 horsepower. The company says the motor is capable of propelling the DC100 to 60 mph in around 3 seconds and pushes on to a top speed of 124 mph. Davinci didn’t use other electric motorcycles as a benchmark. Instead, it targeted the performance of a 1,000cc gas-powered motorcycle. The horsepower and acceleration figures are right on point, even though a liter bike from the 1980s will smoke it in top speed.

Providing juice for that motor is a chunky 17.7 kWh lithium battery. That’s just a touch larger than the largest battery of the Zero SR/S, which comes in at 17.3 kWh. 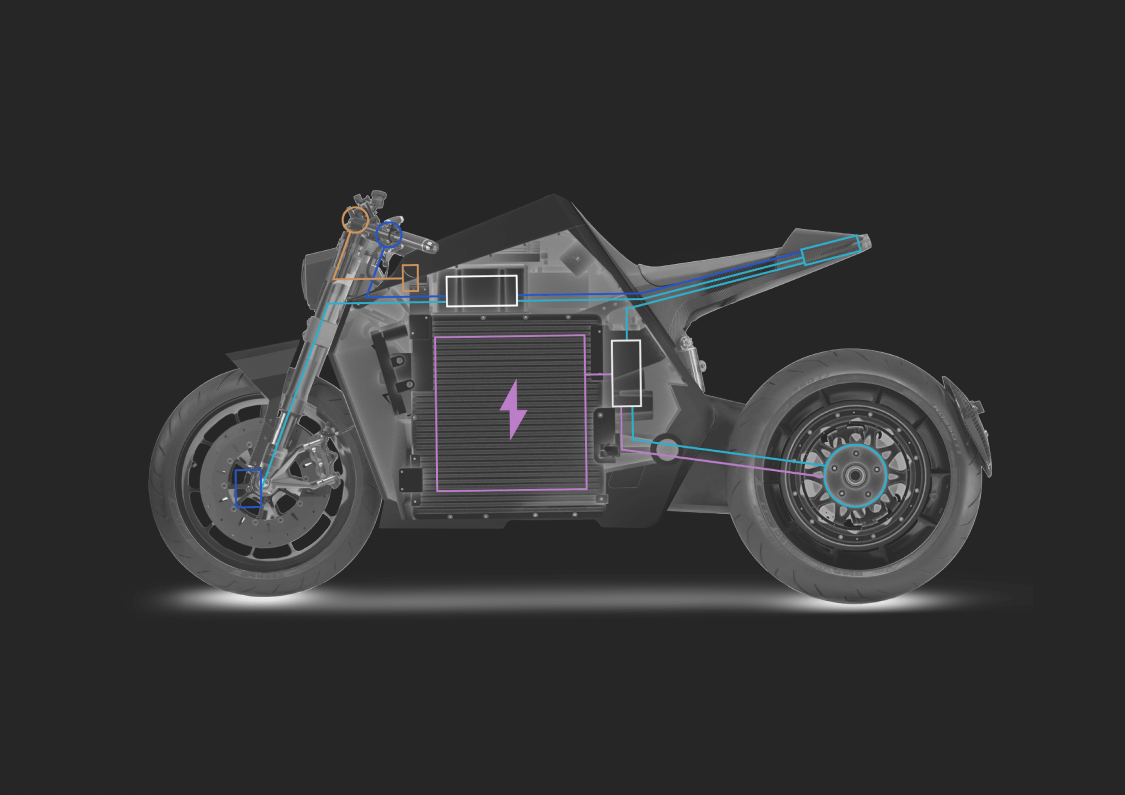 In the Zero, that’s good for up to 227 miles of city range. The DC100 claims 222 miles on the Worldwide Harmonised Light Vehicle Test Procedure (WLTP) and 249 miles on the New European Driving Cycle (NEDC). Davinci also claims that when hooked up to a DC fast charger, the motorcycle can get a full charge in just 30 minutes.

This motorcycle would be cool enough as it is. I dig the weird headlight setup and its futuristic body. And while it misses the mark on a liter bike, it seems like a competent electric motorcycle. And if you don’t like the DC100 and have very deep pockets, you can get a Davinci Classic. 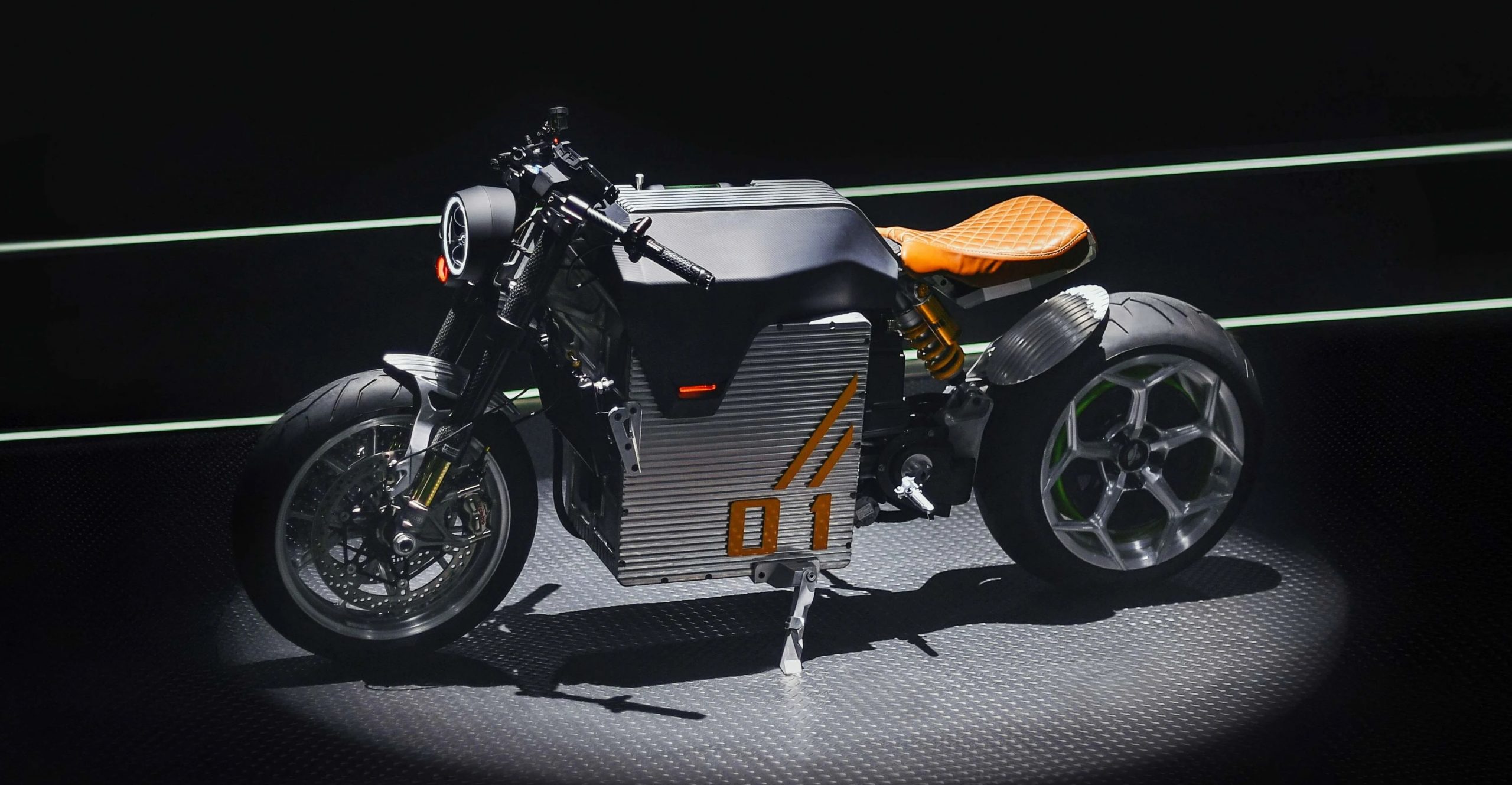 This is the DC100 but with the bodywork stripped away and replaced with a French calfskin seat, custom CNC parts, Brembo brakes, Öhlins front suspension, carbon fiber parts, and more.

I like the idea of the trick features for making riding easier for some folks, and I can even get behind the gauge cluster setup. Instead of a gauge cluster, you just plop your phone down and use your phone as your bike’s display. But it gets way weirder. 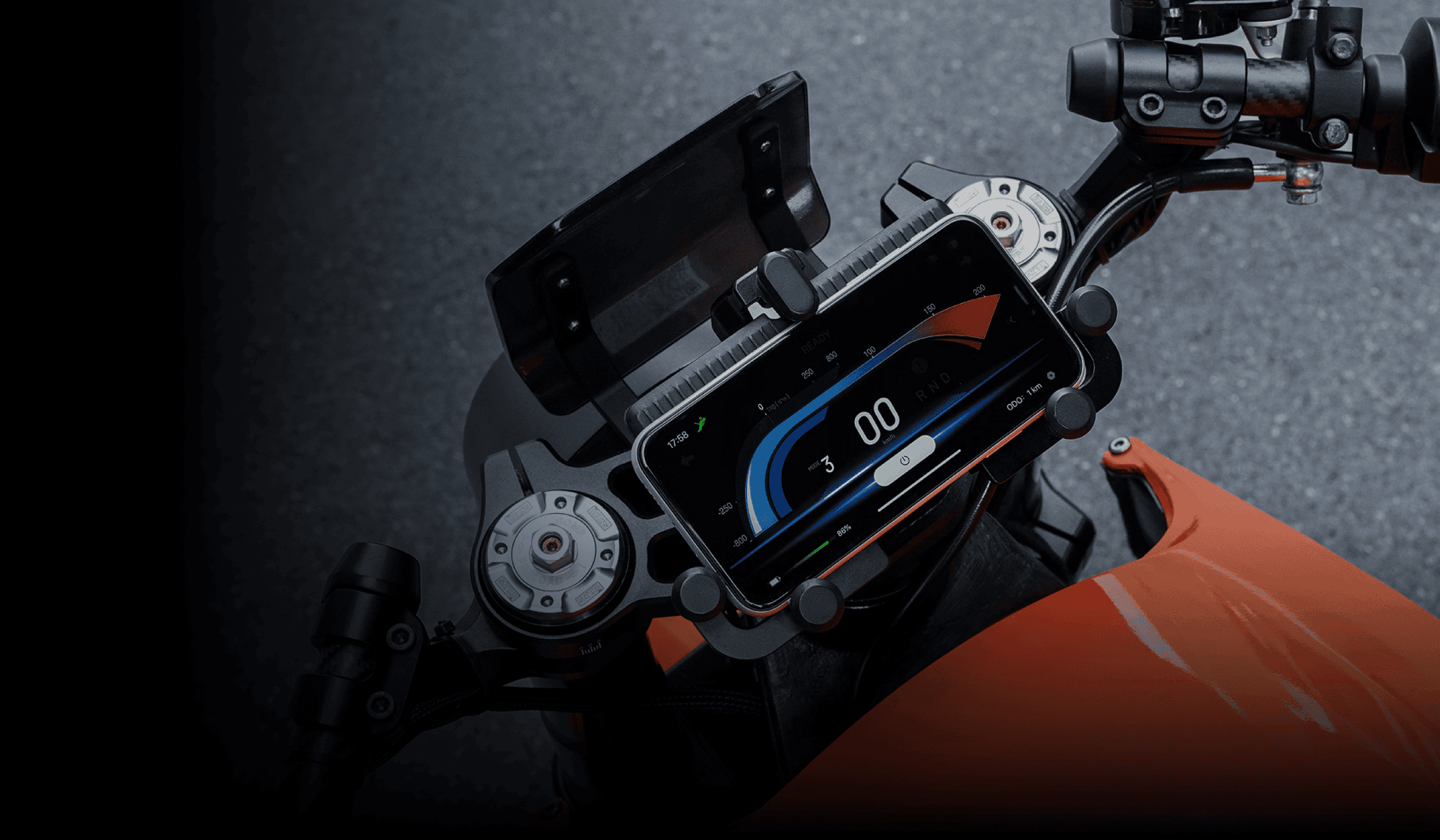 Davinci says that it has much larger plans for this motorcycle. The company plans on adding an Electric Power Steering system and a 6-axis Inertial Measurement Unit, which will allow the motorcycle to balance itself. That bit of equipment also combines with some sensors to create what Davinci calls “self-riding & target recognition.” What this means is that the DC100 will be able to ride to a target set by the rider.

Apparently, Davinci wants the DC100 to be able to follow you and perhaps even be your jogging buddy. That sounds a bit silly, and there’s more, the proposed system includes an automatic parking function and remote control. I could see myself remote-controlling a motorcycle for funsies. This is pretty novel, but not new. Honda’s been working on similar technology for several years.

It’s unclear how far along Davinci is in this, or if buyers will have to wait for the technology to deploy later. The bikes also feature over-the-air updates, and Davinci says that they would be used for wireless upgrades to the motorcycle’s systems.

The DC100 made a debut in China and Europe last year, and the company has set its U.S. launch at CES 2023. As of right now, Davinci is collecting reservations for the DC100, projecting a $27,500 price. The Classic, with its CNC parts and carbon fiber, is expected to set you back $90,000.

As with all new companies, take any promises with a grain of salt. Deliveries were originally supposed to begin in April 2022, then in July 2022. Deliveries are now expected to happen later this year. If news changes at CES, you’ll be sure to read it here!

A Startup Is Launching A Practical Electric Motorcycle That Costs Just $1,500

Mercedes is a lifelong fan of all things powered by an engine. When she isn't driving one of her five Smart Fortwos or her 14 other vehicles she could be found in the cockpit of a Cessna 172 or perhaps swimming in any body of water that she could find. She also has a deep love for buses of all kinds. Please send her buses. mercedes@theautopian.com Instagram: @mistymotors Twitter: @Miss_Mercedes30 Facebook.com/neonspinnazz
Read All My Posts »
PrevPreviousIt’s Wrenching Wednesday! Autopian Members: Let’s Talk About Your Car Projects And Problems
NextLoving Cars Is Different For Everyone: Comment Of The DayNext